A year ago, the Permian Basin region was one of America’s hottest labor markets, fueled by a fracking gold rush. When A Texas Oil Boom Goes Busts 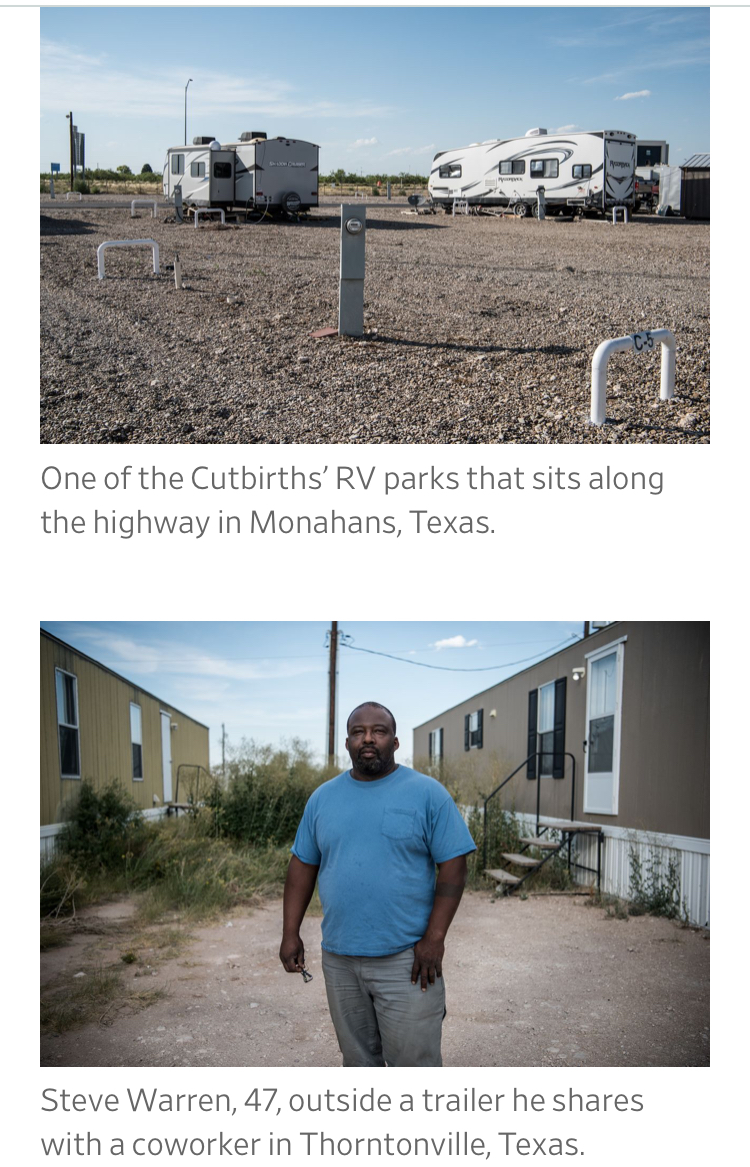 Today, the oil field has all but shut down, and everyone is feeling the pain, from restaurant owners to landlords to barbers.

When an oil bust takes hold in West Texas, no one is spared: Drilling rigs collect dust, barber chairs sit empty, students drop out of school and lines swell at the food bank.

The collapse in the wake of the new coronavirus has been historically brutal. In a matter of weeks, global demand for oil shriveled by more than 20% this spring, as people hunkered indoors and stopped flying and driving. Oil prices crashed. A fracking industry that had pushed American production to a world-leading 13 million barrels a day went into full retreat. And the nation’s hottest oilfield, the Permian Basin, all but shut down overnight. 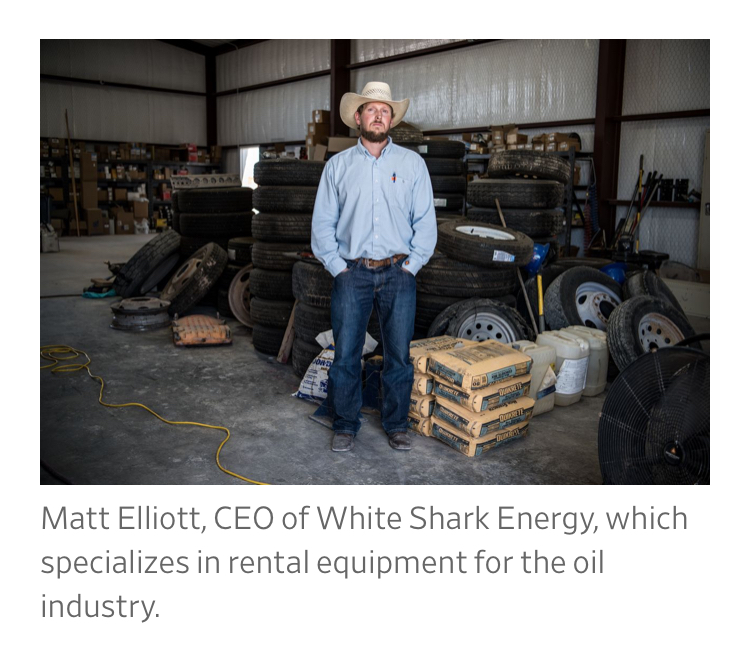 Last year, we chronicled the boom in the Permian region, then one of the hottest labor markets in the country. At the time, construction there was soaring, hotels were charging rates rivaling those of New York City, barbers were earning up to $180,000 a year and schools were scrambling to cope with housing costs that were surging along with oil output.

By the end of last year, that frenzy was slowing as investors withdrew from the oil patch after years of disappointing returns.

Now, everyone from restaurant owners to ranchers is struggling to survive as oil companies pull back on drilling new wells and turn off existing ones that are uneconomical at current prices. By early July, there were just 125 rigs drilling for oil in the Permian, roughly one-third of the number at the end of last year, according to Baker Hughes Co.

This is what it looks like when an oil boom busts. 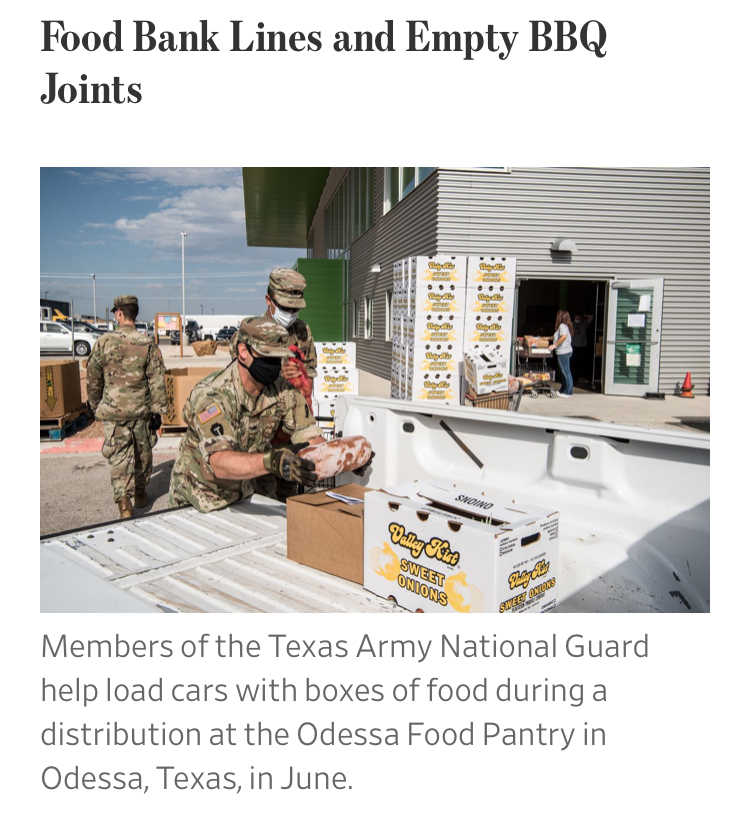 Abe Guerrero has been picking up food from the West Texas Food Bank since he was furloughed from his job two months ago as a safety manager for an oil field trucking company.

The company laid off all but 20 of its roughly 200 drivers. Overall, in the Permian Basin, unemployment soared to 13.4% in May, from 2.1% a year earlier, according to the Texas Workforce Commission.

The RV park where Mr. Guerrero lives with a friend cut rent from $580 a month to $480 after it lost 80% of its residents, but he says he still counts on the food bank. 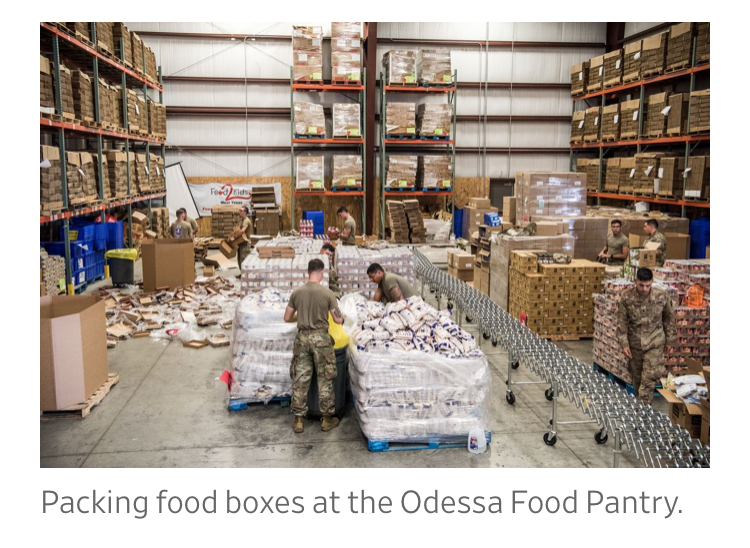 “It’s a different way of life these days,” says Mr. Guerrero, 57, who recently waited in line to receive food in Odessa. “It’s like a third-world country.”

The West Texas Food Bank has distributed nearly 900,000 pounds of food per month since March, up from about 550,000 pounds last year, according to Executive Director Libby Campbell. She says 74% of the households collecting food in April had never been to the food bank before. 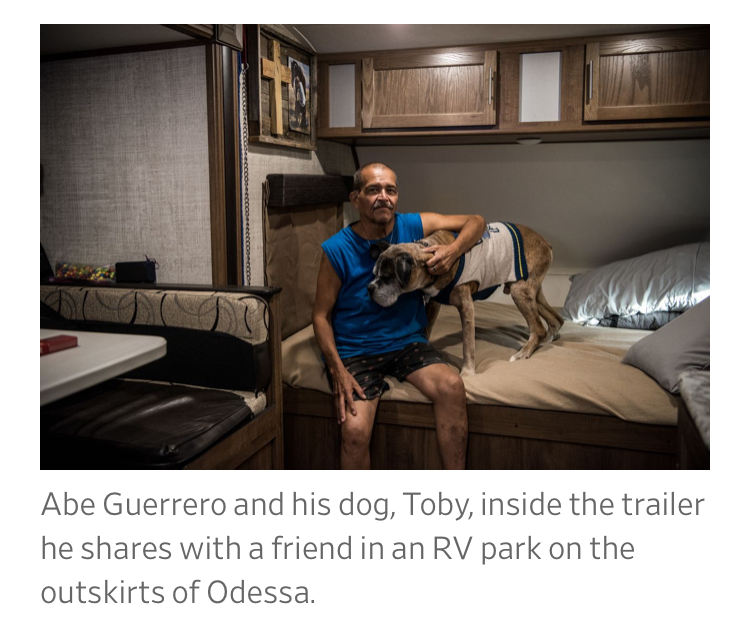 “We know how to deal with hurricanes, fires, floods,” Ms. Campbell says. “With this, there’s no handbook. It’s going to be a long road, and we are nowhere near being done.”

Pody’s BBQ, a Pecos restaurant that was a mainstay for roughnecks when oil was booming, has lost 30% of its sales. It began shedding customers well before the bust, owner Israel Campos says. Drilling activity was already slowing last year as an oversupply of crude started to form.

“You could see it coming,” Mr. Campos says. “Then the pandemic hit and that was even worse.”

Mr. Campos says many of his customers can no longer afford more expensive offerings such as brisket. Pody’s has shifted its menu to Mexican cuisine and burgers, less expensive fare. 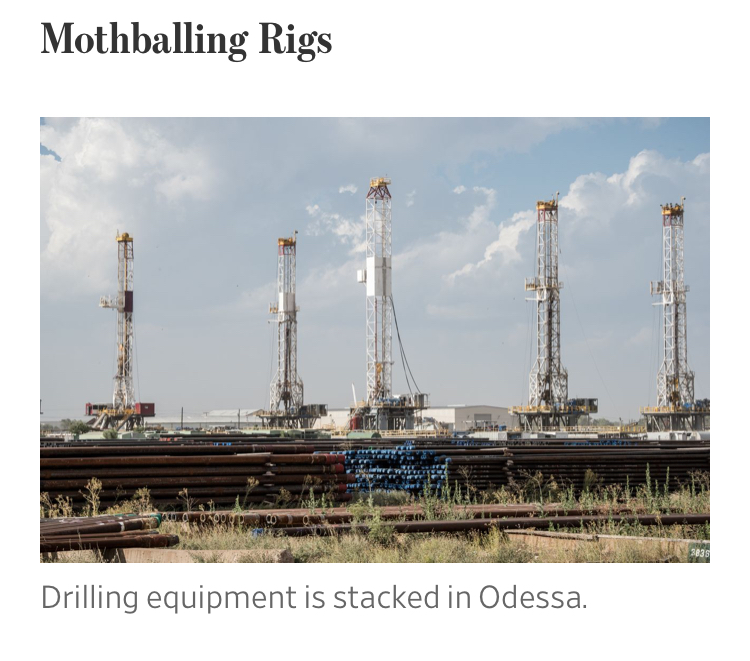 Matt Elliott realized U.S. oil production was about to fall early this year when he started to see drilling rigs sitting idle around Pecos. Then Saudi Arabia and Russia started a price war over market share in March, making the coronavirus oil crash worse.

“Within a matter of weeks, it was a whole new industry,” says Mr. Elliott, 32, the chief executive of White Shark Energy LLC, a service and equipment rental company.

Work in the oil field all but dried up, so he and his employees busied themselves with equipment maintenance. He expects his company’s revenue to be 50% to 70% below last year’s.

If there’s a silver lining, it’s that the crash may give towns such a Pecos time to build the infrastructure needed to support the influx of new residents and transient workers that the oil boom attracted, says Mr. Elliott, a Pecos native.

Pecos’s population has soared nearly 20% since 2010 to about 10,000, according to the U.S. Census Bureau, and construction is underway on a new $115 million hospital and a $17 million recreation center.

“It provides our community time to regain our footing and make the changes that are needed,” he says. 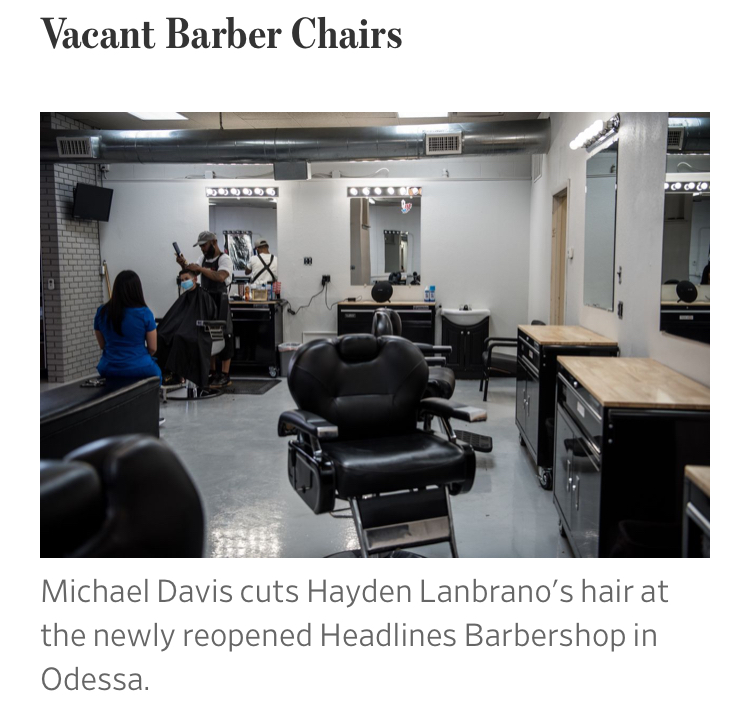 Last year, barbers working for Pete McGarity could make $180,000 a year cutting hair near oil drilling sites across the Permian. Now, Mr. McGarity works the oil patch alone and sees a fraction of the customers.

“It’s definitely a panic, man, there’s a lot of people living off oil around here,” he says.

Mr. McGarity and a team of three or four barbers used to work around the clock in his custom-built, mobile barbershop during the oil boom. Now, the roughnecks that would line up outside his trailer have all but disappeared, he says.

These days Mr. McGarity drives the shop alone to forgotten towns in the Chihuahuan Desert that lack barbers, to make up for lost oil customers. Where his team once cut as many as a hundred heads a day, Mr. McGarity says he might now see 20 customers. 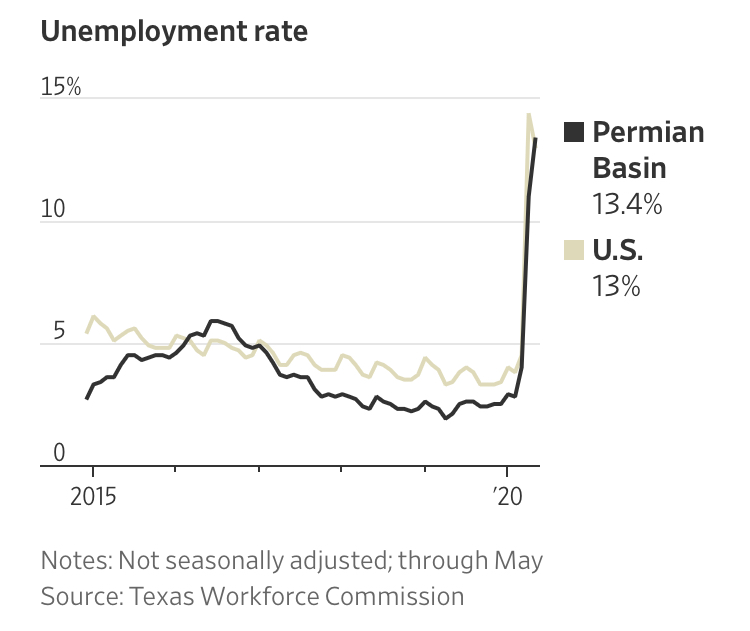 The closure of Headlines, his brick-and-mortar barbershop in Odessa made the pain worse. Initially closed due to quarantine measures, it wasn’t able to reopen until June after a car crashed into the front of the shop.

Mr. McGarity hasn’t had to lay off any employees yet, but says he’ll only be able to use half of his barber chairs to maintain social distances and is worried customers might stay away.

Still, he believes his shop will survive, having been through several oil busts since opening his Odessa store in 1998.

“If you look at history, oil will be back up,” he says. “What concerns me is how long it will take.”

In Fort Stockton, less than two hours southwest of Midland, the local school district was having to build duplexes for teachers to make the remote region more affordable for those not working in the oil field.

Now, it has lost touch with roughly 10% of its student body since spring break, when the Lone Star State stopped in-person instruction due to the threat of the coronavirus. Typically, that figure is less than 1% in the district.

Fort Stockton administrators figure some of those students have moved away permanently, in some cases because their parents lost oilfield jobs.

“Whatever our school year looks like next year, it’s going to be a catching up,” says Robyn Derington, who until recently was Fort Stockton’s curriculum director.

Meanwhile, the school district still hopes the rental housing that it’s building for teachers will help lure prospective hires to the far-flung town. Homes in West Texas can be difficult to afford on a teacher’s salary and rentals scarce.

Despite the bust, home prices haven’t yet declined significantly. The typical home price in Midland was about $265,000 in May, according to Zillow Group Inc.

“People are asking about it, so I think that’s a good thing,” says Fort Stockton school superintendent Ralph Traynham, adding that he expects the first units to be available this summer. 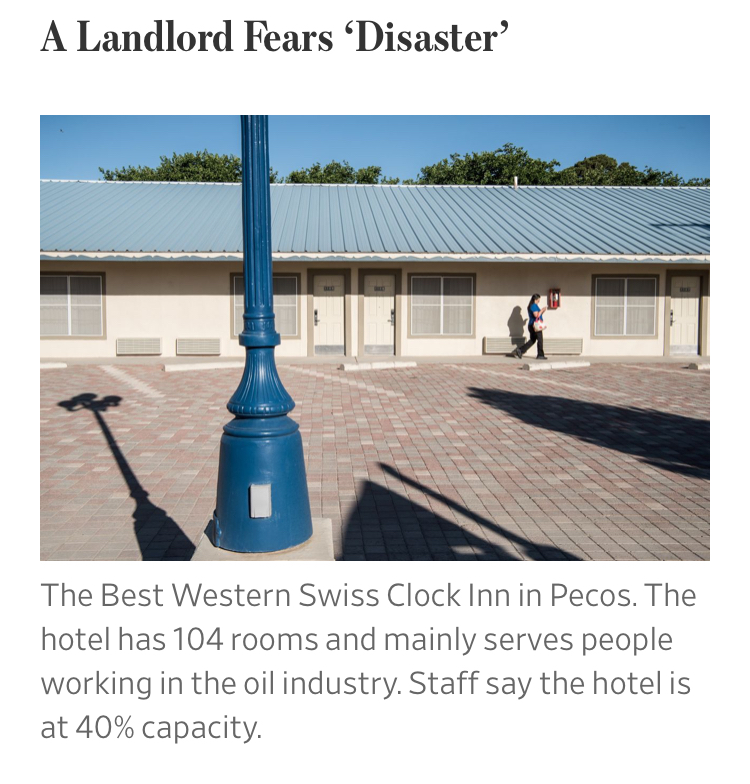 The boom spurred an explosion of temporary housing catering to oilfield workers, many of whom don’t live locally. In Pecos, more than a dozen new hotels opened in the last decade, says Kurt Schlunegger, whose family owns two area hotels.

That construction surge made this spring’s oil crash all the more painful. Hotel occupancy across the Permian plunged to 32% in April, less than half of year-ago levels and the lowest rate on record, according to hotel data tracker STR.

“People were building and opening right up until this Covid thing,” says Mr. Schlunegger, who saw occupancy at his properties fall below 20% over Memorial Day weekend.

He is optimistic about being able to recover, in part because neither of his hotels is mortgaged. But some competitors have already closed, he says.

About half an hour east, in the Monahans area, the apartments, trailers and RV parks that Henry Cutbirth and his brother own were still about 60% full in late June. But Mr. Cutbirth, 68, worries that demand could erode after federal assistance programs such as the Paycheck Protection Program expire, possibly leading to additional job losses.

“When that subsidy quits, this one is probably going to make ‘86 look like nothing. It’s going to be a disaster,” Mr. Cutbirth says, referring to the last major Texas oil bust.

Steve Warren, a 47-year-old electrician who services drilling rigs, lives in one of Mr. Cutbirth’s RV parks two weeks out of every month.

“You come in and there’s really hardly anybody to talk to,” he says. “Almost like a ghost town, getting pretty close.”

Paul Weatherby’s family has collected royalties from oil production on their Fort Stockton-area ranch for nearly a century.

Those checks have shrunk as large producers, including Exxon Mobil Corp. and Diamondback Energy Inc., have pulled drilling rigs from Mr. Weatherby’s ranch. The 1,760-acre ranch has 11 producing wells. Exxon and Diamondback had planned to drill at least six additional wells between them, Mr. Weatherby says, but halted those plans for now.

“We love getting the mailbox money,” Mr. Weatherby says. “Everybody’s royalty checks have been minimal or nonexistent for a month or two, that’s just the way it is.”

But the Weatherby family, which collectively relies on the royalty payments to get by, has a new source of income: solar power. Mr. Weatherby signed a 30-year lease in 2018 for 600 of the ranch’s acres with 7X Energy, which is building the largest solar field in Texas, a 602 megawatt project across 2,000 acres. Around 300 workers show up at the ranch every day to build the project.

Mr. Weatherby, a retired rancher and sheriff, says his family’s long-term bet is on solar. While the initial returns aren’t as lucrative as an oil well, a 30-year solar lease is more dependable than what he sees as an oversaturated oil industry.

“We’re not engineers, but from a redneck standpoint, it seems like they have too much competition,” Mr. Weatherby says of oil companies. “Whenever you have a rig sitting there drilling well after well and Tom, Dick and Harry are drilling the same thing, you get nervous.”