When the market is up, it’s really easy to look like you know what you’re doing. With equities in the 8th year of a bull market, many investors and shareholders may feel this way. It’s been a fantastic run — the S&P 500 is up over 250% from its market low during the bottom of the Great Recession. A Case For Bitcoin As Recession Hedge In A Diversified Investment Portfolio (#GotBitcoin?)

Historically, the average bull market in U.S. equities lasts around 9 years, and has a cumulative average return of 450%+.

But we know from history that these bull markets don’t last forever.

At some point, a macro down-cycle comes around, sending asset prices tumbling. Yet, predicting down-cycles can be very difficult. When fundamentals erode, bullish investor sentiment can still maintain price levels.

Millennials Are Still Catching Up From The Last Recession. Now They Face a New One.

By studying the historical trends, we can make an educated guess on where we are in the current cycle:

At just over 8 years into the current bull market, and with historical bull runs around 9 years on average, we are statistically likely to see a down-cycle within the next few years.

Some traditional metrics support the view that asset prices are nearing peaks. High cyclically adjusted price-to-earnings ratio (CAPE) and price-to-book (PB) ratios are two examples. CAPE and PB are far from perfect as predictive metrics, but still can tell us about where we may stand in the cycle. 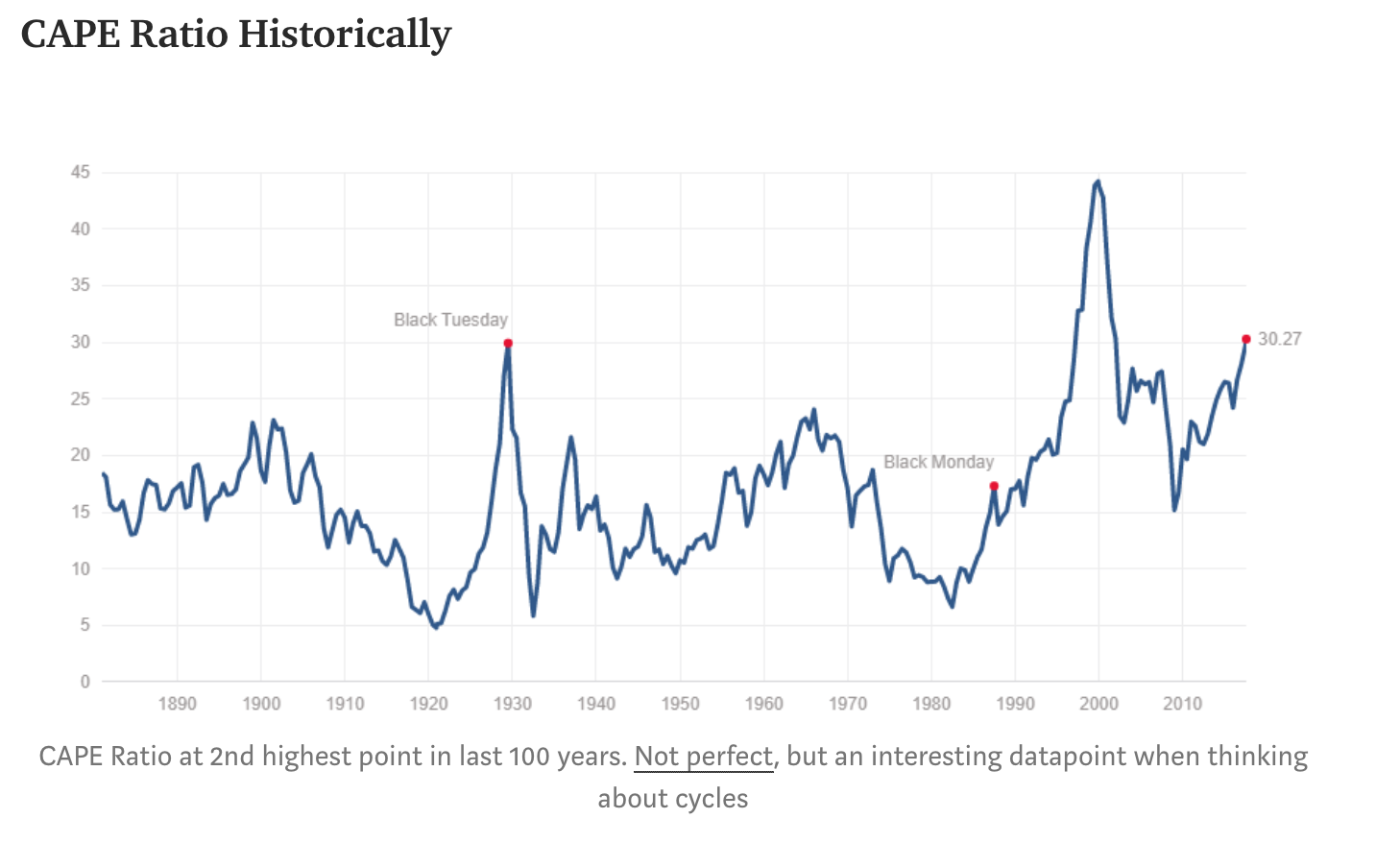 The last two US-based recessions originated from exploding asset bubbles. These bubbles caused systemic damage across the economy, affecting many asset classes. The Dot-Com Bubble and Great Recession seem obvious when looking back today. Yet, they doomed many professional and amateur investors at the time.

Investors can hold store of value or counter-cyclical assets to combat down-cycles.

We’ve already looked at some of the merits of Bitcoin as a store of value asset. Here, we will take that a step further with a prediction:

If Bitcoin can be a store of value, it will be counter-cyclical and grow in value in the next global recession.

Nowadays there are great investors basing their capital on mainly digital proof of their wealth in stocks and holdings they own.

Bitcoin is young (born 2009) and only recently developed significant global trading volume. Because of that, we don’t have data on how it performs during something like the Great Recession. However, we can make an educated guess in two ways:

(1). By analyzing other counter-cyclical assets we think have similar qualities

(2).A priori — making judgments based on what we fundamentally know about Bitcoin
Good As Gold

Gold is the de facto store of value asset globally. Investors often seek the precious metal during times of economic or political turmoil. They view it as a safe haven and difficult to manipulate by central authorities.

Gold and Bitcoin arguably have much in common. Understanding gold’s performance in recent recessions could be useful for Bitcoin’s outlook. It could be predictive of how Bitcoin might behave in a similar situation.

When equities fell during the Great Recession, the price of gold rose as investors flocked to safety. Between November 2007 and July 2009, gold was up ~19%, while equities declined by ~35%. 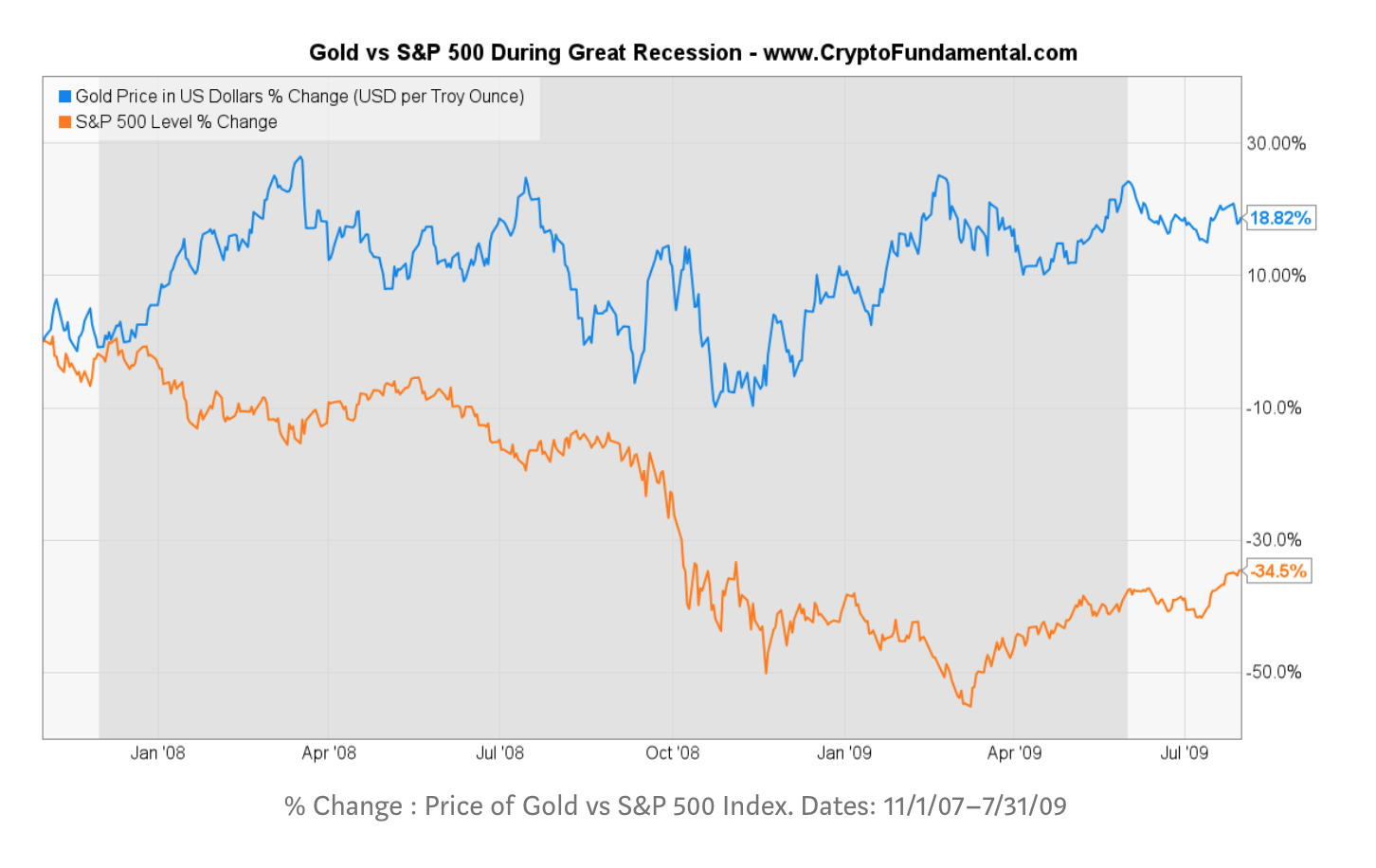 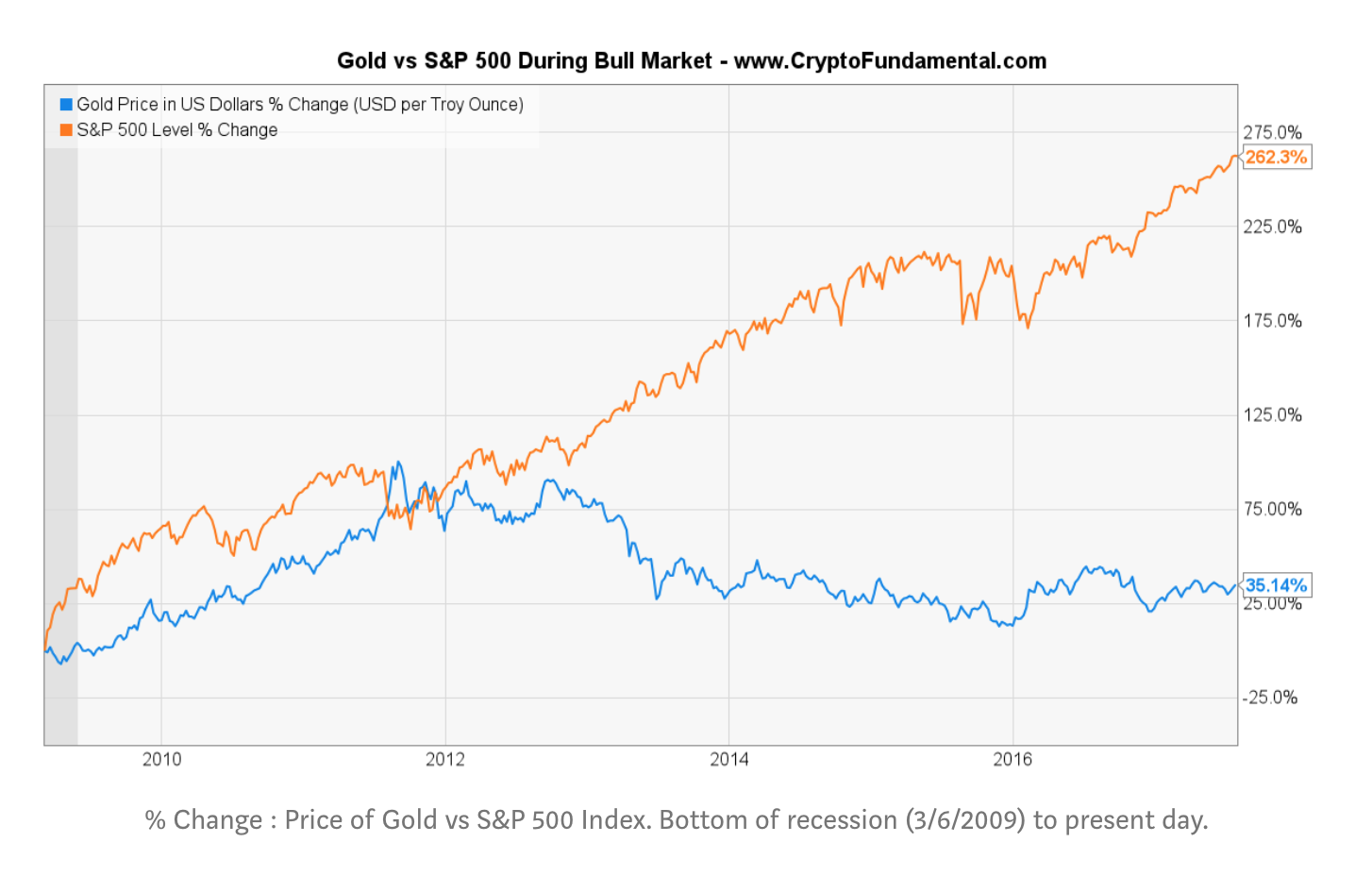 Gold’s movement was less dramatic during the shorter and less widespread Dot Com Bubble. Yet, it still exhibited counter-cyclical traits even then. Gold prices were roughly flat while equities (especially technology) declined meaningfully. 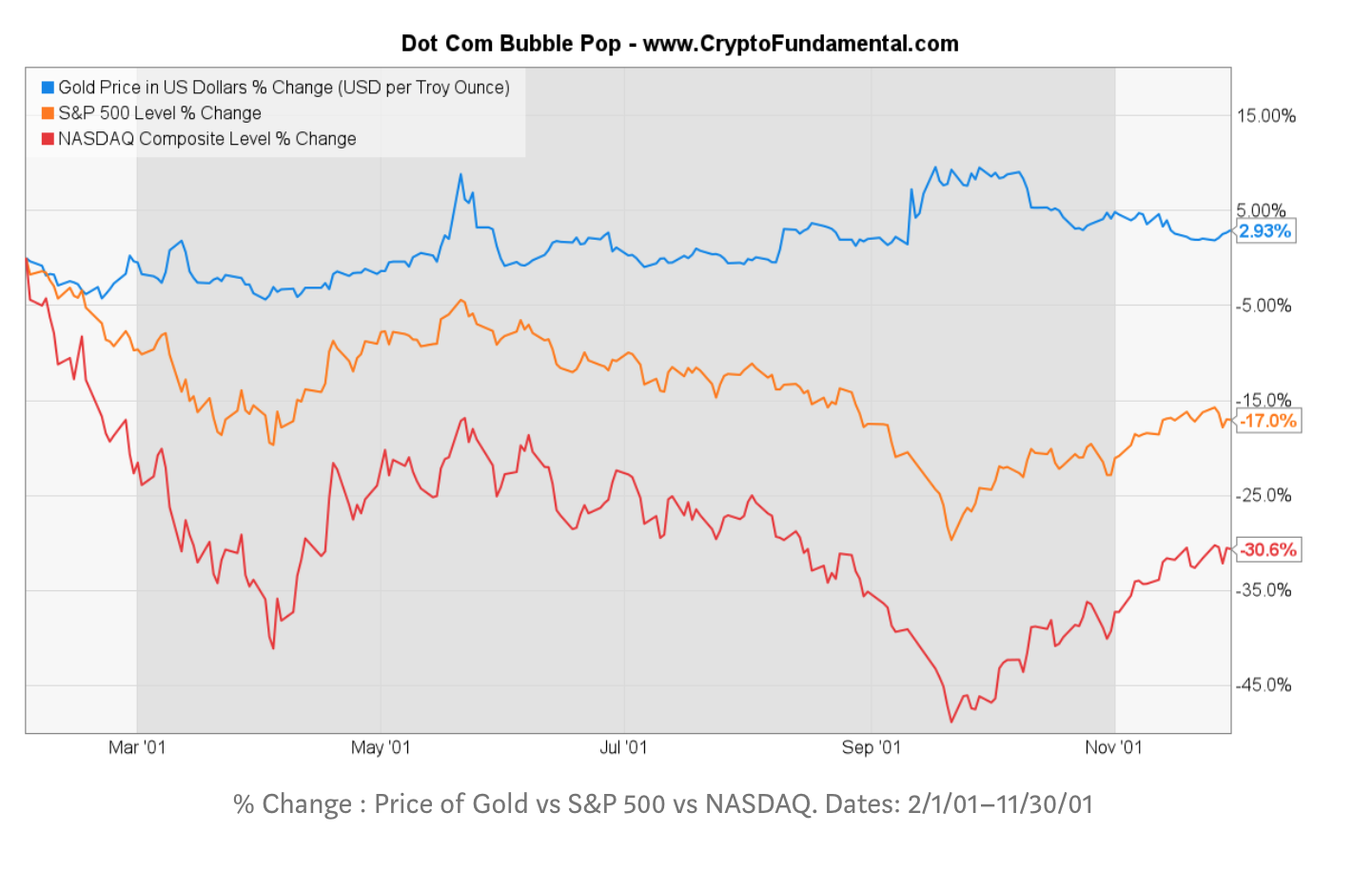 But Bitcoin and gold are not currently correlated in their movements.

In fact, Bitcoin is not correlated to any non-cryptoasset right now. Kevin Lu, over at his blog Signal Plot, put together some great graphs illustrating the correlations between Bitcoin and other assets: 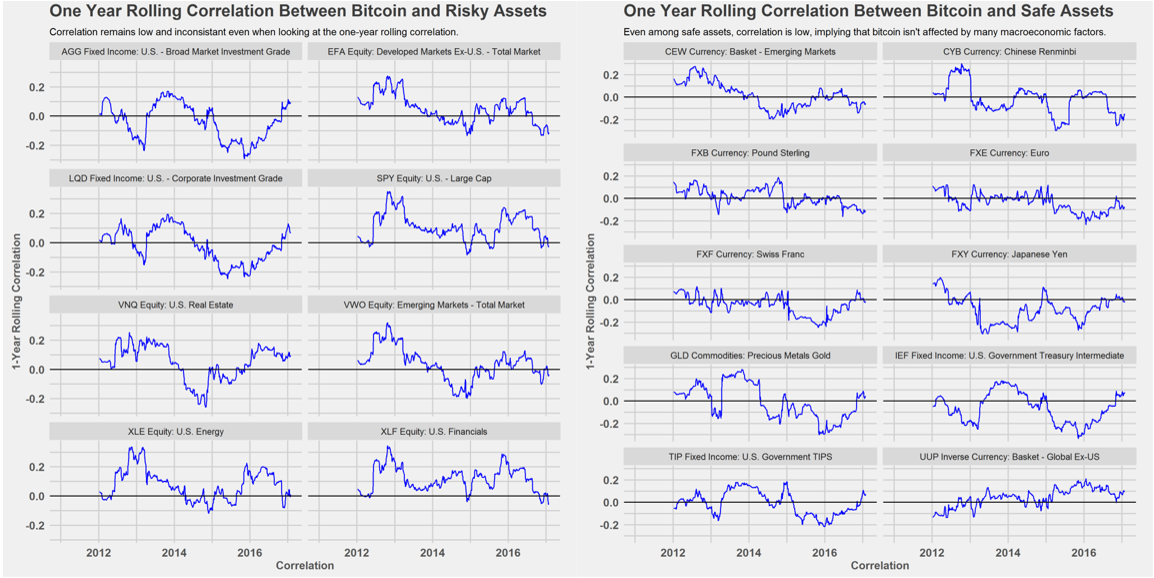 Bitcoin’s lack of correlation makes it a possible hedge for portfolios with securities that are correlated (e.g. stocks). Modern Portfolio Theory (MPT) is what much of modern investing is based on. MPT asserts that holding uncorrelated assets can be useful to raise returns without higher risk.

The fact that Bitcoin both appears to move independently from other assets (lacks correlation) and has growth upside makes it a very interesting candidate for long-term investment.

It is likely that Bitcoin’s lack of correlation is driven primarily by two factors:

* There isn’t a huge amount of institutional money trading and investing in Bitcoin (yet). Once this happens, it will almost certainly become more correlated with other assets, including gold.

Risks To The Predictions

There are multiple risks that could influence whether Bitcoin is counter-cyclical:
Bitcoin loses stability and becomes perceived as less safe

So far, Bitcoin has survived exchange hacks, competing hard forks and network upgrades. This resilience is a solid case for it continue being a store of value asset.

Yet, Bitcoin could theoretically destabilize due to successful forks, hacks or other reasons. That could cause investors to lose confidence in the asset as a safe haven.

Without the store of value quality, Bitcoin likely wouldn’t be counter-cyclical.
Degree of likelihood: Unlikely, but possible

Bitcoin Becomes Overvalued Prior To A Recession

Due to extreme interest, Bitcoin’s price could rise to very high level before a recession. If its value was too high, investors might view Bitcoin as part of the risky, overvalued asset pool. This might cause investors to sell Bitcoin positions along with traditional asset classes.

Another Crypto-Asset Takes The Store Of Value Crown

Several other cryptoassets have promising outlooks. Some are in position to be safe haven assets, especially if Bitcoin loses stability in the future. Some of the notable candidates include:

* Litecoin (LTC), which is similar to Bitcoin in many ways (“silver to Bitcoin’s gold”). LTC tends to implement scalability / network changes faster

* Ethereum Classic (ETC), which has smart contract functionality with a fixed supply of tokens. ‘Regular’ Ethereum, despite lacking a fixed supply, could also become a store of value due to its large potential utility value.

(1). We are roughly 8 years into the current bull market. We are statistically likely (but not guaranteed) to see a recession in the short to medium term.

(2). Bitcoin is already considered a store of value asset by many, and will increasingly be viewed that way by institutional investors

(3). Bitcoin will likely be counter-cyclical in the next recession, rising in value as equities and correlated assets drop

(4). Bitcoin is currently not correlated with other asset classes, making it a potentially attractive way to hedge traditional assets

(6). In my view, Bitcoin makes a lot of sense as part of a diversified, long-term portfolio that seeks to perform in all economic conditions