Produced in the bone marrow, white blood cells (WBCs) are the disease-fighting agents of your immune system. How To Naturally Increase Your White Blood Cell Count

A healthy body has an abundance of WBCs that travel to the affected organs whenever an infection strikes.

The normal range of WBCs in the blood is between 4,500 and 10,000 per microliter. When the WBC count drops below 4,500, it is a cause for concern. This condition is called leukopenia.

Another condition called neutropenia is a type of leukopenia and is characterized by a deficiency of neutrophil granulocytes, a specific type of white blood cells that are the most abundant in the body.

Some common causes of leukopenia include acute viral infections such as a cold and influenza, copper and zinc deficiency, typhoid, dengue, malaria, tuberculosis and Lyme disease.

Other causes include aplastic anemia; cancers such as bone cancer, which damages the bone marrow, and lymphoma, which is a cancer that begins in the WBCs; chemotherapy and radiation therapy, which disrupt bone marrow activity; and autoimmune diseases like lupus.

If the deficiency is not treated, these diseases will strengthen over time, rendering your body unable to fight the diseases at all.

Here Are Top 10 Ways To Help Increase The White Blood Cell Count In Your Body: 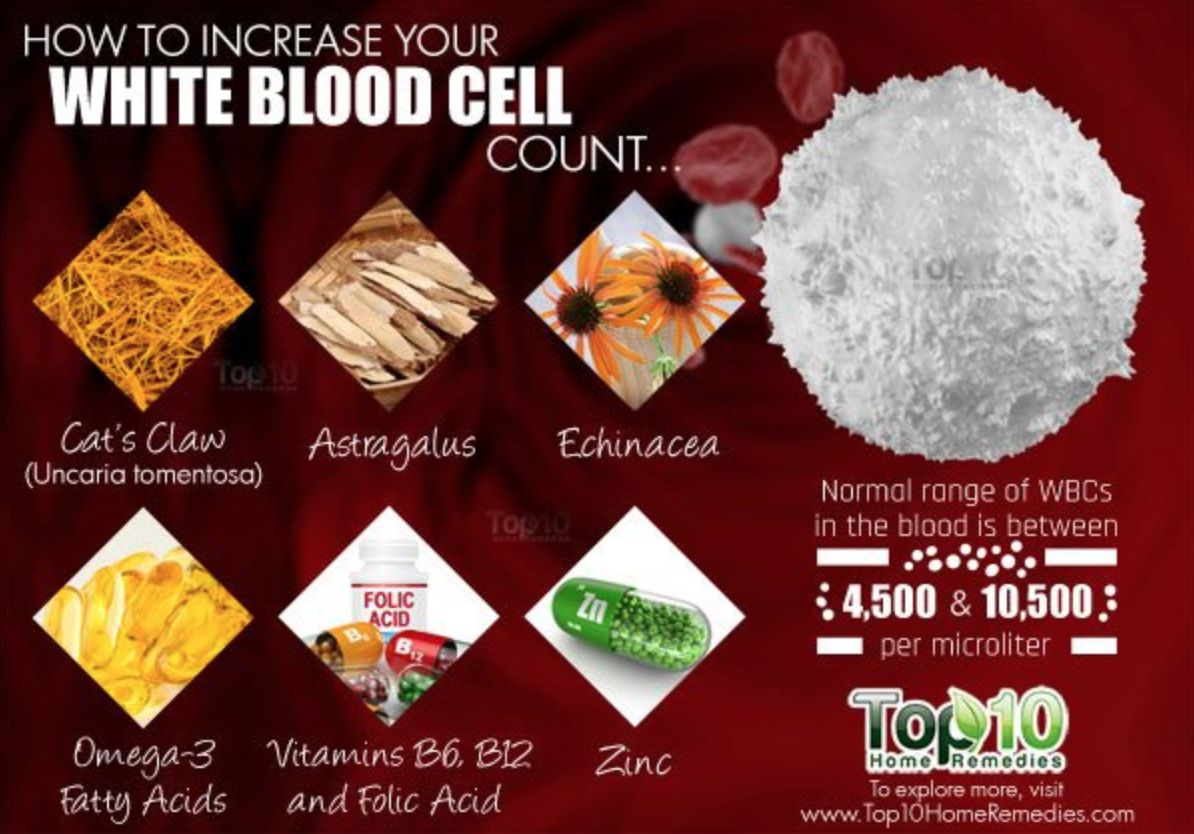 Cat’s claw is a South American vine found in the rainforests in the Amazon that possesses incredible immune-boosting properties.

A 2001 study published in Phytomedicine notes that when 12 healthy adult subjects were administered daily doses of cat’s claw water extract supplements for 12 weeks, they experienced an increased production of leukocytes.

Studies also have demonstrated the efficacy of cat’s claw consumption in patients who had a low WBC count post chemotherapy.

However, cancer patients should consult their doctors before consuming this herb, as it is known to have promoted survival of leukemic cells in lab conditions.

Note: Consult your doctor before consuming this herb if you are on any kind of medication. If you take blood thinners, use cat’s claw with caution as it could induce bleeding.

A 2006 study published in Phytotherapy Research notes that when patients consumed astragalus separately and in combination with other herbs for seven days, the activity of the immune cells was strengthened.

While astragalus does not eliminate cancer from its roots, it significantly boosts the immune systems of cancer patients by promoting phagocytosis in the existing WBCs.

Astragalus is available as tablet or capsule supplements, as a tincture (alcohol extract) and prescribed by some doctors in an injectable form.

Note: Consult your doctor before taking this herb for any possible side effects and drug interactions.

Unlike vaccines that target a specific disease and antibiotics that directly attack bacteria, echinacea stimulates the activity of the WBCs that fight diseases through a process called phagocytosis.

A 2005 study published in the Journal of Clinical Pharmacy and Therapeutics notes that 11 healthy individuals (between 26 and 61 years old) who consumed two echinacea tablets daily for 14 days experienced an increase in the overall number of WBCs and stimulated activity of leucocytes.

Dietary omega-3 fatty acids increase the body’s production of phagocytes, a type of WBCs that engulf harmful foreign entities like bacteria entering our bodies through a process called phagocytosis.

A 2001 study published in Cancer Epidemiology, Biomarkers and Prevention notes that the levels of WBCs in female volunteers increased when they took dietary fatty acids.

In addition, a 2013 study published in the Journal of Leukocyte Biology notes that fish oil consumption promotes the activity of a type of WBCs called B cells.

Vitamins B6 and B12 as well as folic acid are all responsible for producing WBCs in the body.

A 2011 study published in the Journal of Medical Case Reports notes that a neutropenia patient reported significantly decreased levels of vitamins B6, B12 and folic acid. Oral vitamin B6 supplementation increased the level of neutrophil WBCs and corrected her condition.

Severe neutropenia can cause cancer. The study further suggests a thorough screening for deficiencies of vitamins B6, B12 and folic acid in neutropenia patients for focused treatment.

Note: Consult your doctor for recommended daily doses of these foods/supplements suitable for your health conditions and any prescribed medication.

Healthy adults have between 50 and 80 milligrams of copper in their blood. A copper deficiency leads to a number of disorders, including leukopenia.

A 2002 study published in Blood notes that leukopenia and neutropenia is often misdiagnosed as myelodysplastic syndrome and not related to a copper deficiency.

A later 2012 study published in Current Opinion in Hematology further states the same and suggests that patients diagnosed with leukopenia must be tested for copper deficiency, as it is often a leading cause of the condition.

Note: Consult your doctor for the recommended daily doses of these foods/supplements suitable for your health conditions and any prescribed medication.

It is no secret that zinc is a solid immune-booster. Because there were few studies on the correlation between zinc deficiency and reduction of WBCs, a rat study was conducted in 2009 and published in the Journal of Nutritional Science and Vitaminology.

After consuming a zinc-deficient diet for four weeks, the mice showed reduced levels of monocytes and granulocytes (types of WBCs). This study creates a foundation for similar results in humans, although more evidence is required.

A zinc deficiency is directly associated with a number of immune system disorders, including cancer. A 1997 study published in Proceedings of the Association of the American Physicians notes that zinc-deficient subjects had reduced levels of T-cells, a type of WBCs largely responsible for overall immunity.

Therefore, a regular zinc intake might promote the production of immune-boosting T-cells in the body. 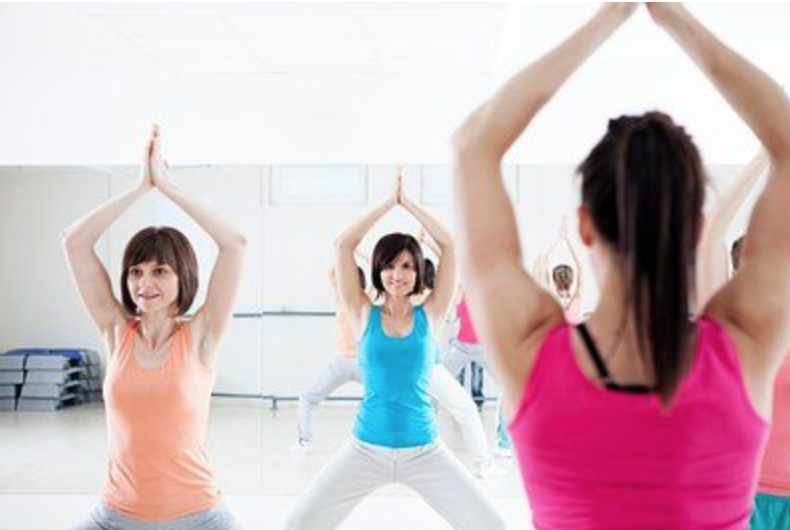 Exercise significantly boosts immunity. It promotes blood circulation, including WBCs, to various parts of the body.

However, studies have shown that overexerting yourself through exercise (intense gym routines or marathon running) proves counterproductive and decrease the amount of WBCs in the body.

A 2003 study published in the Scandinavian Journal of Immunology notes that young men who underwent rigorous military training for five to seven days saw an initial increase and subsequent decrease in the number of neutrophils and monocytes, while other WBCs like lymphocytes and eosinophils reduced throughout.

The neutrophil count, specifically, improved significantly in the initial days, but it plummeted as the exercises became more intense.

This goes to prove that while exercise is important for overall health, it should not be overdone. 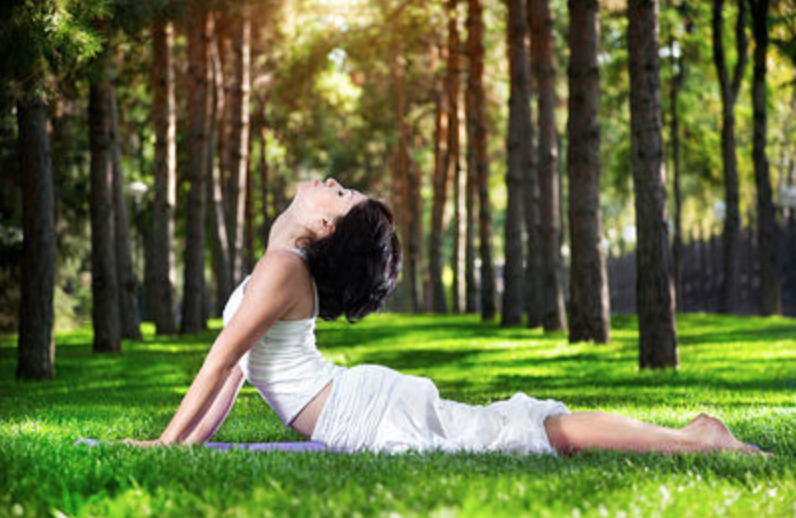 While all forms of yoga improve circulation and promote the body’s production of WBCs, the Cobra Pose (bhujangasana) in particular activates the thymus gland located behind the breastbone. The thymus gland produces disease-fighting T-cells.

* Lie On Your Stomach, Stretch Your Legs Out And Place Your Hands Lightly Underneath Your Shoulders With The Palms Down And The Elbows Folded Upward.

* Press Your Thighs, Navel And The Tops Of Your Feet Into The Ground.

* Inhale And Slowly Raise Your Upper Body (Head, Chest And Abdomen) With The Support Of Your Arms, Bringing Your Shoulder Blades Close Together.

* Maintaining That Position, Stretch Your Tailbone And The Crown Of Your Head Further Back.

* Hold This Pose For 15 To 30 Seconds, Exhale, Lower Your Torso Back To The Ground And Put Your Hands Beside You.

If you have a low WBC count, it is imperative to practice good hygiene. This is a necessary to boost your immune system.

If you are practicing any of the above-mentioned measures to increase your WBC count, your hygiene practices can make or break your efforts.

Poor hygiene will increase your risk of infection, further suppressing your immune system and decreasing your body’s WBC production.

Make sure to regularly wash your hands, avoid unpasteurized and raw foods, and wash, peel and cook your vegetables really well before consuming them.