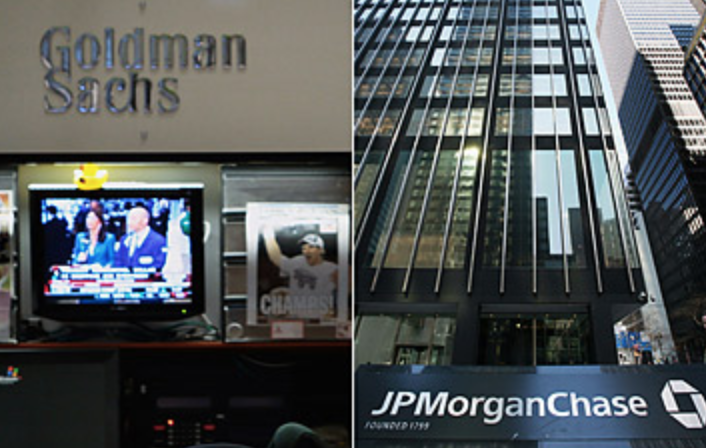 JPMorgan Chase CEO Jamie Dimon indicated in a recent interview with Yahoo Finance that he had not spoken with Facebook about the development of Libra.

“But it’s very possible someone in the company did,” Dimon said.

“Blockchain is real,” he said, citing his company’s foray into the space with JPM Coin blockchain. “And I think competition is real.”

For Dimon, cryptocurrencies bring disruption to the banking industry because they provide similar services that banks traditionally provided like money transmission, clearinghouse activity, and real-time payments – though he adds, “It’s not an existential threat.”

Whether it’s a bank or a crypto service startup, Dimon said there are serious issues regarding the future of money. He believes some of these are caused by the government, specifically in determining whether they will be subject to banking regulations, KYC, the bank secrecy act, or anti-money laundering rules.

“I always look at these [blockchain] systems like we’d like to do some of it too, ourselves.”

David Solomon said he believes global payment systems are heading in the direction of stablecoins — cryptocurrencies pegged to fiat assets such as the U.S. dollar.

Although he stopped short of confirming whether Goldman Sachs has had discussions with Facebook about its upcoming libra cryptocurrency and Calibra wallet, Solomon said his corporation finds the concept “interesting.”

When asked whether Goldman Sachs will follow JPMorgan Chase in launching its own virtual currency, Solomon said:

“Assume that all major financial institutions around the world are looking at the potential of tokenization, stablecoins and frictionless payments.”

Elsewhere in the interview, Solomon predicted that regulations will change in response to virtual currencies — but said he doesn’t think new entrants in the cryptosphere will force banks to close. He added:

“Admittedly, they will have to evolve, because the trades linked to the payment flows will become less profitable. But there are many other reasons why banks must remain innovative, otherwise they will disappear.”

Solomon also suggested that tech giants such as Facebook would like to avoid the regulatory constraints that banks face, making it more likely that they would try to enter into partnerships than become financial institutions themselves.

Earlier this week, reports suggested that JPMorgan Chase is set to begin piloting its own cryptocurrency by the end of this year.

Back in April, Solomon categorically denied that Goldman Sachs ever had plans to open a crypto trading desk during a hearing before the United States House of Representatives Financial Services Committee.

JPMorgan Chase & Co. cross-asset strategists have bad news for anyone on Wall Street betting that Bitcoin is the hottest way to diversify portfolios in a world short on hedges but big on valuation risk.

Not only has Bitcoin proved lousy at offsetting short-term drawdowns in big sell-offs, its very popularity among retail investors is increasing the token’s link with cyclical assets, their research suggests.

The upshot? Crypto investing might be best seen as way to protect against the loss of faith in a country’s currency or payment system — rather than a competitor to the likes of gold.

Bitcoin is the “least reliable hedge during periods of acute market stress,” wrote strategists John Normand and Federico Manicardi in a report on Thursday.

While they acknowledged the appeal of Bitcoin as an answer for investors who are worried about policy shocks, the team cautioned that it won’t behave like a traditional defensive asset anytime soon.

“The mainstreaming of crypto ownership is raising correlations with cyclical assets, potentially converting them from insurance to leverage,” they added.

The trajectory of Bitcoin so far has been unlike anything that Wall Street has seen, and the debate is heating up among professional investors. In early January, Normand’s colleague at JPMorgan, Nikolaos Panigirtzoglou suggested Bitcoin could hit $146,000 in the long run as it draws cash from investors who would have previously bought gold.

Normand and Manicardi analyzed Bitcoin’s relationship with other assets to try to answer the question: Can investors use it to diversify a portfolio?

In the past five years, Bitcoin had a low correlation with hedges, such as gold and Treasuries and the yen, making it potentially useful for investors managing a broad portfolio. But in the recent run-up, the dynamics have changed and Bitcoin is moving more in lockstep with traditional cyclical markets.

“If sustained, this development could erode diversification value over time,” they said.

Still, opinions remain sharply divided over whether cryptocurrencies are a new asset for the digital age or speculative frenzy gone haywire. After surging and crashing in 2017, the market was largely dormant until last year, when a combination of renewed Wall Street interest and Robinhood speculation sent prices skyrocketing once again.

Bitcoin prices have gradually pulled back after surpassing $40,000 in early January and were trading around $32,000 today.

“Whether cryptocurrencies are judged eventually as a financial innovation or a speculative bubble, Bitcoin has already achieved the fastest-ever price appreciation of any must-have asset,” Normand and Manicardi wrote.

Goldman Sachs CEO: Regulators Should Be ‘Hyperventilating’ At Bitcoin’s Success

The CEO of Goldman Sachs believes regulators will not be able to monitor the financial system if Bitcoin is allowed to flourish in its present form.

Goldman Sachs senior chairman Lloyd Blankfein has stated that regulators should be “hyperventilating” in response to Bitcoin’s recent success, characterizing the crypto asset as undermining the capacity for lawmakers to monitor the financial system.

While appearing on CNBC’s Squawk Box on Jan. 25, Blankfein asserted that Bitcoin’s pseudonymous nature makes it perfect for illicit financing, stating: “You don’t know whether or not you’re paying the North Koreans, or Al-Qaeda, or the revolutionary guard.”

Despite authorities frequently utilizing the transparency of blockchain to track the use of crypto by terrorist organizations, Blankfein questioned how regulators can allow crypto assets to flourish in their existing form.

“If I were a regulator, I would be kind of hyperventilating at the success of [Bitcoin] at the moment, and I would be arming myself to deal with it,” he said

In order to conform Bitcoin to the existing financial and regulatory apparatus, Blankfein asserts that many of the fundamental freedoms enabled by BTC must be reined in. However, he questioned whether strong demand would continue to exist for Bitcoin without its pseudonymous privacy features:

“This could be workable, but it will undermine the freedom and liberty and kind of lack of transparency that people like about it in the first place. So that’s the conundrum that Bitcoin will have to deal its way out of.”

Blankfein also criticized Bitcoin as a store of value, emphasizing its price volatility and the technological literacy required to self-custody BTC.

“It’s a store of value that can move 10% in a day, that if you lose the code or if you lose the slip of paper — it’s lost forever, or if somebody takes it from you — how will you know,” he said.

In August, the U.S. Justice Department announced it has seized millions worth of crypto from more than 300 wallets associated with Al-Qaeda and ISIS.

In the announcement, Don Fort, chief of IRS criminal investigation, or IRS-CI, emphasized that the agency had been able to trace the crypto to its source — allowing it to dismantle the groups’ financial networks.

The megabank is on the hunt for its first crop of crypto-savvy employees. Experience with bitcoin and ethereum is “a huge plus.”

JPMorgan Chase & Co. is on the hunt for crypto-savvy candidates to fill a growing number of digital asset crossover jobs.

Instead, the six positions, which have been hitting JPMorgan’s jobs board since at least April, speak to a financial services giant bolstering its crypto readiness on multiple fronts.

The positions at the 255,000-person company range from New Jersey to Illinois to Hong Kong.

Together, the prospective hires add some weight to JPMorgan’s gradual turnabout on digital assets. After years of CEO Jamie Dimon badmouthing bitcoin, the bank, which has never explicitly confirmed previous CoinDesk reporting that it was launching a private fund, has begun laying a broader foundation for the crypto space.

Representatives of JPMorgan declined to comment for this article.

Crypto’s most tantalizing JPM flirtation could be its status in consumer payments. Merchant Services, the firm’s $1 trillion+ annual transactions payment processing operation, is assembling a “New Payment Methods” team that will look into crypto tie-ins.

The wealth management, corporate banking, consumer payments and investments conglomerate is also adding a pair of “cryptocurrency risk managers” to its corporate compliance ranks. According to these job posts, issued last week, these officers will “identify, manage and mitigate risk associated with digital currencies” across multiple business lines.

They will also need to understand the ever-changing crypto regulatory landscape. Dimon called that a “serious emerging issue” in his April shareholder letter. He has repeatedly warned of, and even called for, closer regulation of crypto in the U.S.

Much of the activity in crypto and decentralized finance (DeFi) comes from outside the U.S. – especially in Asia. JPMorgan is keen to follow crypto’s legal tack in that key region, too. In mid-May it began searching for a regulatory affairs associate to monitor the changing goal posts for “digital assets” and other technologies in the Asia-Pacific region.

Despite its newcomer status in the crypto asset ecosystem, JPMorgan has for years pursued adjacent ventures in blockchain technology. Developers are exploring tokenized asset collateralization and cross-border payments using the bank’s JPMCoin.

Even in Onyx, the fast-growing blockchain division building JPM coin and other projects atop a privacy-centric version of Ethereum called Quorum – once owned by JPM, now owned by ConsenSys – recent job posts are taking uncommonly direct aim at cryptocurrencies.

A mid-May post for a “Senior Digital Assets Platform Engineering Lead” calls for candidates who understand proof-of-stake consensus mechanisms and experience with ethereum (ETH, +4.24%) and bitcoin (BTC, +1.36%), the latter being “a huge plus.”

A source familiar with the matter said the role is not related to a specific project, but a general hire meant to “strengthen our overall engineering development team.” The source downplayed the possibility that a “digital assets platform” is in the works.

JPMorgan declined to comment on the platform. Shortly after being contacted by CoinDesk, mentions within the post of a “digital assets platform” were removed.