Builders are looking to expand to meet surging demand, but are constrained by the number of lots ready for construction. Housing Boom Brings A Shortage Of Land To Build New Homes

Amid the biggest housing boom in years, home builders are worried they are running out of land.

The combination of record low interest rates and a new premium on space during the pandemic has generated robust home sales. A shortage of previously owned homes on the market is prompting more buyers to opt for new construction.

Acquiring and preparing land for new-home construction can be a lengthy process. Builders often buy land at least a year before building on it, and they sometimes spend years obtaining permits, installing sewage systems or paving roads before they prepare lots for sale.

Now, with much of their land inventory still in the development process, builders face the prospect of a shortage next year of finished lots, or land that is ready to build, according to Jody Kahn, senior vice president at John Burns Real Estate Consulting LLC, which regularly surveys builders and land brokers.

The scarcity of developed land means that builders could be unable to meet booming demand. It also means builders would be able to keep raising prices, analysts say. New-home sales rose 19.1% by volume in the first 11 months of 2020 compared with the same period last year, according to the Commerce Department.

Luke Pickerill, owner of MonteVista Homes in Bend, Ore., worries he will miss some of the buying frenzy. His company is selling 16 to 20 homes a month, up from its typical pace of eight to 10 homes a month. He has projects in development, but they won’t be ready for a few months.

“In Central Oregon, I will literally be out of lots and I’ll have nothing to sell” by next month, said Mr. Pickerill. “All of the inventory that we expected to be selling in quarter one and quarter two of next year, we’ve now sold through it already this year,” he said.

Competition is stiff for lots that are ready to build on, said Greg Vogel, chief executive of Land Advisors Organization, a land brokerage based in Scottsdale. “In many markets…we just can’t deliver enough finished lot inventory to satisfy the demand,” he said.

Builders’ rush to buy land underscores their confidence in the market’s continued strength. A measure of U.S. home-builder confidence rose in November to a high in data going back to 1985, before declining slightly this month, the National Association of Home Builders said last week.

Land values can be volatile, and many builders found themselves burdened with large land holdings after the 2008-09 financial crisis, including in exurban locations far from city centers. This time they are hedging their risk in remote locations by buying smaller sites, Ms. Kahn said.

An index that tracks the availability of finished lots fell 9% in the third quarter from a year earlier to a low in data going back to 2015, according to Zonda, a housing-market research firm. The most significantly undersupplied markets in the third quarter included San Diego, Seattle, Nashville, Tenn., Boise, Idaho, and Las Vegas, according to Zonda.

Prices for finished lots rose 11% in the third quarter from a year earlier, according to research and advisory firm Zelman & Associates.

Many builders paused or slowed land purchases when the pandemic caused a shutdown of economic activity in the U.S. in March, amid concerns about a decline in housing demand. That has worsened the shortage they are facing now, said Mr. Lord of Meritage Homes.

The pandemic ended up boosting homebuying demand, as shoppers sought out houses better suited to working or schooling from home. Changes in remote-work policies also prompted some workers to relocate to cheaper areas.

Land projects currently in development are also moving slower than usual as local governments adjust to remote work, Mr. Lord said. Meritage said it spent almost $300 million on land and development in the third quarter, a high for the builder.

Some builders are responding to the demand by limiting sales to ensure they don’t sell more homes than they can construct at one time. Luxury builder Toll Brothers Inc. said this month that it is limiting the number of sales a month in between 15% and 20% of its communities. 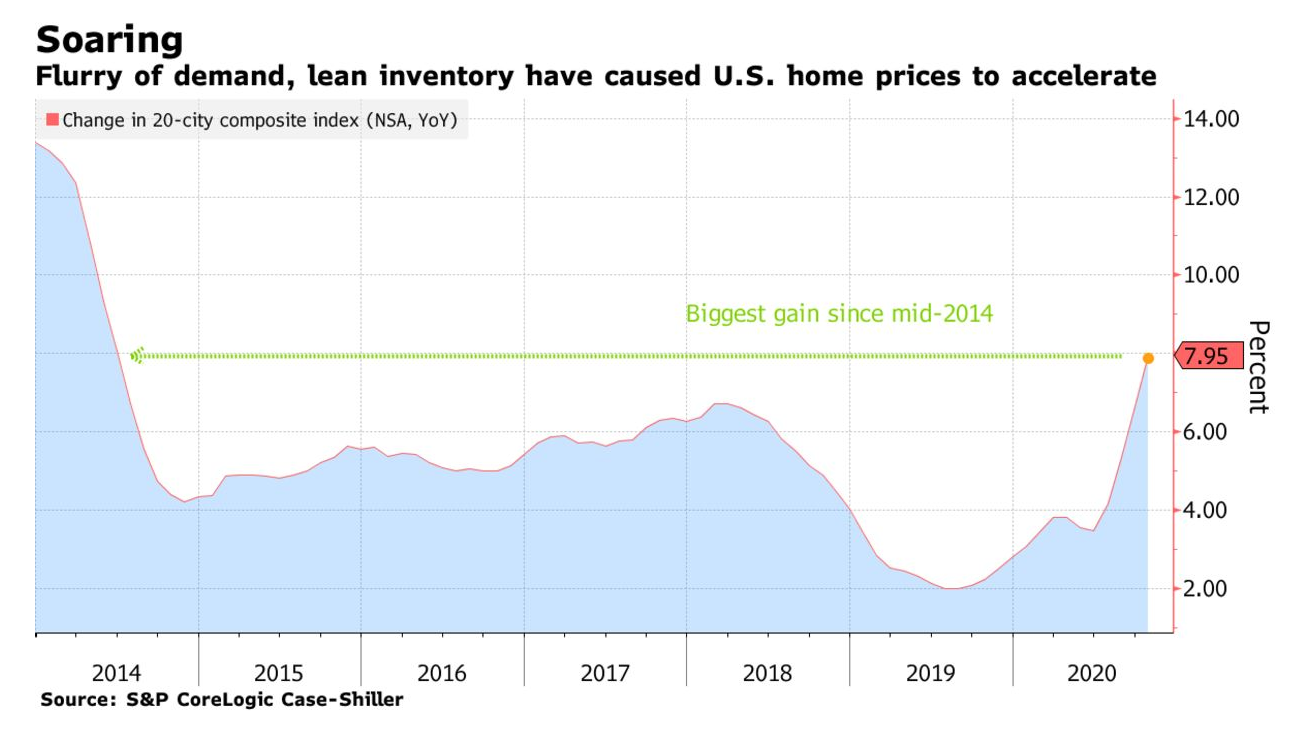 The figures show how a lean number of listings and solid demand, fueled by cheap borrowing costs, have given sellers more leeway to raise asking prices. At the same time, the lack of inventory and surge in home prices threaten to slow housing’s momentum and price some buyers out of the market.

A gauge of home prices nationwide increased 8.4% from a year earlier, the most since March 2014.

“Although the full history of the pandemic’s impact on housing prices is yet to be written, the data from the last several months are consistent with the view that Covid has encouraged potential buyers to move from urban apartments to suburban homes,” Craig Lazzara, managing director and global head of index investment strategy at S&P Dow Jones Indices, said in a statement.

A separate report from the Federal Housing Finance Agency — which derives its data from mortgages that conform to Fannie Mae and Freddie Mac limits — reported that its purchase-only price index rose 10.2% in October from a year ago, the most since 2005.