Harvard researchers raise the possibility that it’s a probe sent by extraterrestrials.  Scientists Say Mysterious ‘Oumuamua’ Object Could Be An Alien Spacecraft 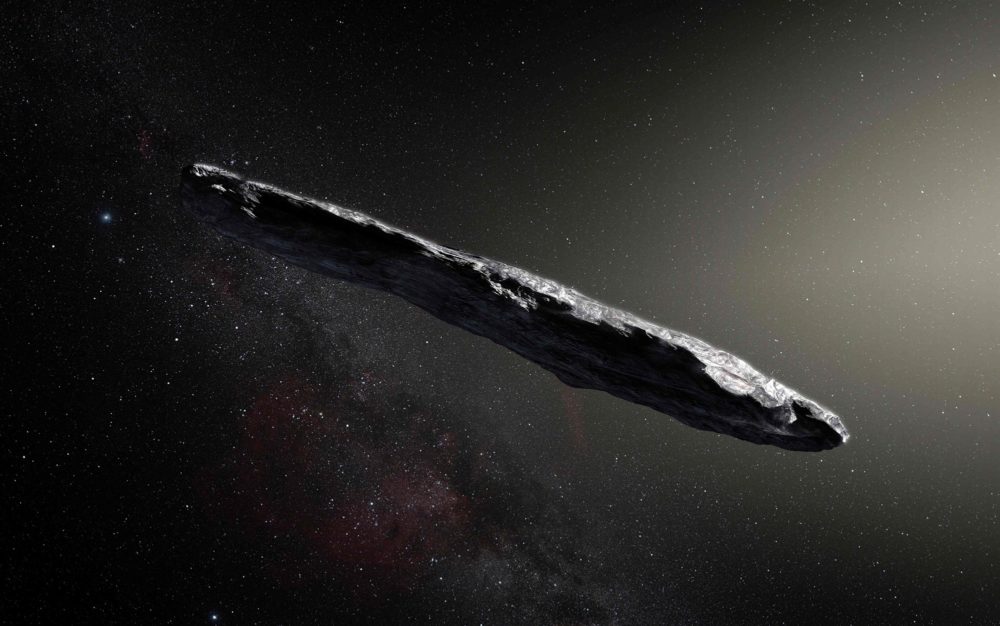 Scientists have been puzzling over Oumuamua ever since the mysterious space object was observed tumbling past the sun in late 2017. Given its high speed and its unusual trajectory, the reddish, stadium-sized whatever-it-is had clearly come from outside our solar system. But its flattened, elongated shape and the way it accelerated on its way through the solar system set it apart from conventional asteroids and comets.

Now a pair of Harvard researchers are raising the possibility that Oumuamua is an alien spacecraft. As they say in a paper to be published Nov. 12 in The Astrophysical Journal Letters, the object “may be a fully operational probe sent intentionally to Earth vicinity by an alien civilization.”

The researchers aren’t claiming outright that aliens sent Oumuamua. But after a careful mathematical analysis of the way the interstellar object sped up as it shot past the sun, they say Oumuamua could be a spacecraft pushed through space by light falling on its surface — or, as they put it in the paper, a “lightsail of artificial origin.”

Who Would Have Sent Such A Spacecraft Our Way — And Why?

“It is impossible to guess the purpose behind Oumuamua without more data,” Avi Loeb, chairman of Harvard’s astronomy department and a co-author of the paper, told NBC News MACH in an email. If Oumuamua is a lightsail, he added, one possibility is that it was floating in interstellar space when our solar system ran into it, “like a ship bumping into a buoy on the surface of the ocean.”

Earthlings have launched simple solar-powered lightsails of our own, and Loeb is an adviser to Breakthrough Starshot, an initiative that plans to send a fleet of tiny laser-powered lightsail craft to the nearest star system. But the technology is in its infancy — at least here on Earth.

Loeb and his collaborator, Shmuel Bialy, a postdoctoral fellow at the Harvard-Smithsonian Center for Astrophysics, acknowledge that the alien spacecraft scenario is an “exotic” one. And perhaps not surprisingly, other space scientists have strong doubts about it.

“It’s certainly ingenious to show that an object the size of Oumuamua might be sent by aliens to another star system with nothing but a solar sail for power,” Seth Shostak, a senior astronomer at the SETI Institute in Mountain View, California, said in an email. “But one should not blindly accept this clever hypothesis when there is also a mundane (and a priori more likely) explanation for Oumuamua — namely that it’s a comet or asteroid from afar.”

Coryn Bailer-Jones, an astronomer at the Max Planck Institute for Astronomy in Heidelberg, Germany, voiced similar objections. “In science,” he said in an email, “we must ask ourselves, “Where is the evidence?, not “Where is the lack of evidence so that I can fit in any hypothesis that I like?”

Bailer-Jones, who earlier this year led a group of scientists who identified four dwarf stars as likely origin points for Oumuamua, raised questions in particular about the object’s tumbling motion.

“Why send a spacecraft which is doing this?” he said. “If it were a spacecraft, this tumbling would make it impossible to keep any instruments pointed at the Earth. Of course, one could now say it was an accident, or the aliens did this to deceive us. One can always come up with increasingly implausible suggestions that have no evidence in order to maintain an idea.”

But Loeb called the conjecture “purely scientific and evidence-based,” adding, “I follow the maxim of Sherlock Holmes: When you have excluded the impossible, whatever remains, however improbable, must be the truth.”

The truth may be hard to establish, as Oumuamua has left the solar system and is no longer visible even with telescopes. In any case, Loeb said, the fact that we’ve observed one interstellar object like Oumuama suggests that others may be out there — and astronomers should begin a search for them.

“A survey for lightsails as techno-signatures [of extraterrestrial civilizations] in the solar system is warranted,” he said, “irrespective of whether Oumuamua is one of them.”