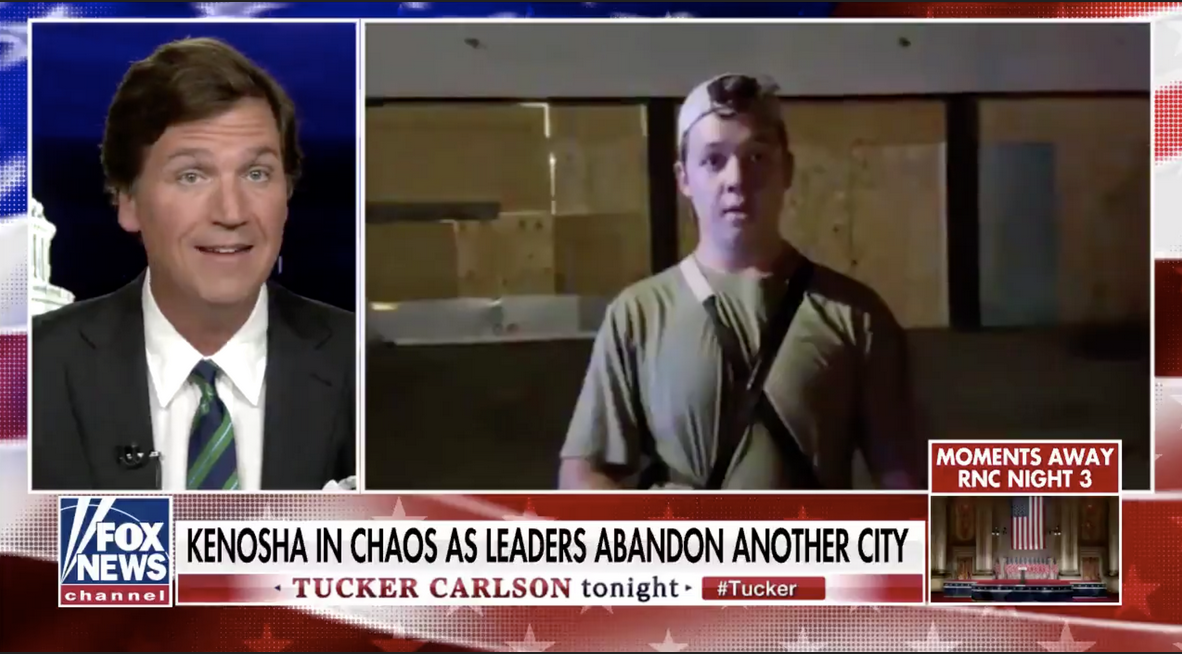 Tucker Carlson Doubles-Down On Criticism Of Protesters: “How Long Do Normal People Continue To Put Up With This?”

The national campaign to promote digital currencies called “The History of Money” was launched three weeks ago and has been running on CNBC, MSNBC, FOX, and FOX Business.

On August 27, Fox News host Tucker Carlson appeared to justify a shooting carried out by a 17-year-old with an automatic rifle that resulted in the death of two protesters and wounded another.

“Are we really surprised that looting and arson accelerated to murder?” Carlson said, “How shocked are we that 17-year-olds with rifles decided they had to maintain order when no one else would?”

Public outcry began to quickly stir on social media. Popular YouTuber and political host Brian Tyler Cohen called out the eight sponsors of the show including Grayscale, stating that they “all just paid for Tucker Calrson to defend a murderer on air”. Fred Guttenberg, who lost his daughter Jamie in a school shooting in 2018, tweeted:

“Tucker, you are a […] lunatic who will get people killed.  I hope advertisers drop you immediately today. You should be removed for the safety of our kids.”

Following the backlash, Grayscale put out a statement that the show is “absolutely not aligned with our values or what we stand for.”

It came to our attention that one of our ads erroneously ran during a TV program last night that is absolutely not aligned with our values or what we stand for. We’re investigating how this aired outside of our media buyer’s guidelines to ensure this does not happen again.

The withdrawal of the ad in the face of public pressure was commended by some online, while others said the firm should stick to cryptocurrencies and leave politics out of it. Crypto investor Matt Messex stated that he will now close his accounts due to the political stance Grayscale has taken:

“I didn’t know Grayscale aligns with the leftists… now I am uninterested in holding my position with the trust any longer..”

Controversy isn’t new for Tucker Carlson, with the host having lost 70 advertisers since December 2018 including T-mobile, Disney, and Papa John’s Pizza. Ad revenue for the show fell to $48.3 million in April this year from almost $92.7 million in 2017. Fox News has called past boycott campaigns “agenda-driven intimidation efforts.”

Grayscale is the largest digital asset management firm in the world with $4.8 billion in Bitcoin (BTC) and $817 million in Ether (ETH) among other cryptocurrencies.

Threats of an ad boycott over popular host’s appeals to bigotry haven’t turned the Murdochs against him.

Carlson has been trafficking in white supremacist myths recently on Fox News and his broadcasts, Greenblatt said, offer an “example of how hatred is being mainstreamed in America in 2021.” He recommended that advertisers rein in spending on Carlson’s show. “You can hold them accountable like few other actors in society because your dollars are the fuel that enables their business model.”

There is a long tradition of companies using ad budgets to strong-arm reporters, commentators and their publishers into avoiding unfavorable coverage, so invoking the power of the purse to stymie inquiries and conversations is thorny. In this particular instance, though, it’s helpful to remember who Carlson is and what he’s up to.

He’s certainly not a reporter, and he’s not a commentator in any classic sense. He’s a deft propagandist and performance artist who steeps himself and his audience in bigotry, racism and “cancel culture” antics to keep the world at bay.

As Michael Gerson, a former adviser to George W. Bush, noted in the Washington Post last week, Carlson is “providing his audience with sophisticated rationales for their worst, most prejudicial instincts. And the brilliance of Carlson’s business model is to reinterpret moral criticism of his bigotry as an attack by elites on his viewers.”

This bile is a hallmark of our times. And it’s not about left versus right. At its core, it’s about a war between facts and disinformation, with power as the prize, and deserves to be throttled.

Greenblatt’s appeal to advertisers aims to cut off one source of funding for it, but Carlson is just a front man for the larger enterprise churning along behind him. The Murdochs call the shots at Fox, and convincing them to change course matters most.

Greenblatt recognizes that as well. He and Lachlan Murdoch, Fox’s chief executive officer, exchanged letters recently about Carlson. Murdoch defended his star, saying Greenblatt somehow misinterpreted Carlson’s advocacy for the voting rights of white people, and his invocation of the Great Replacement Theory, as bigotry. “Fox Corporation shares your values and abhors anti-Semitism, white supremacy and racism of any kind,” Murdoch assured him.

Aha. Carlson, however, has been taking deep dives into this sort of muck for some time. So has his network. The Murdochs don’t see a moral imperative at work because they’re politically aligned with the project they, their shareholders and their subscribers are funding. Fox’s programming, Murdoch told investors in February, “is exactly where we should be targeted.”

Does staying the course make business sense for Rupert Murdoch and his son even if they don’t have ethical qualms about it? They’ve never stopped supporting programs simply because advertisers have threatened to walk, perhaps because advertisers have found other places in the Fox empire to park their money even after abandoning hosts such as Carlson and Laura Ingraham.

Advertisers have been pulling out of Carlson’s show over the last year, and its ad revenues slid accordingly, despite boffo ratings. Carlson has no blue-chip advertisers on his show, and one of his biggest sponsors is My Pillow Inc., the company founded by a Donald Trump loyalist, Mike Lindell. But Fox’s overall ad revenues were up about 14% in its most-recent quarter, in part because of a handsome – and one-time – boost from political advertising tied to the 2020 presidential election.

As my colleague Tara Lachapelle has also pointed out, Fox generates only about 30% of its earnings from advertising.

Its bottom line is insulated from vagaries in the ad market and among viewers by multiyear affiliate deals locked in with pay-TV providers.