The Bitcoin network has surpassed 500 million transactions since going live over 11 years ago. Bitcoin Achieves Major Milestone With Half A Billion Transactions Confirmed

According to blockchain analytics site Statoshi, there have been half a billion transactions on the Bitcoin blockchain as of press time. 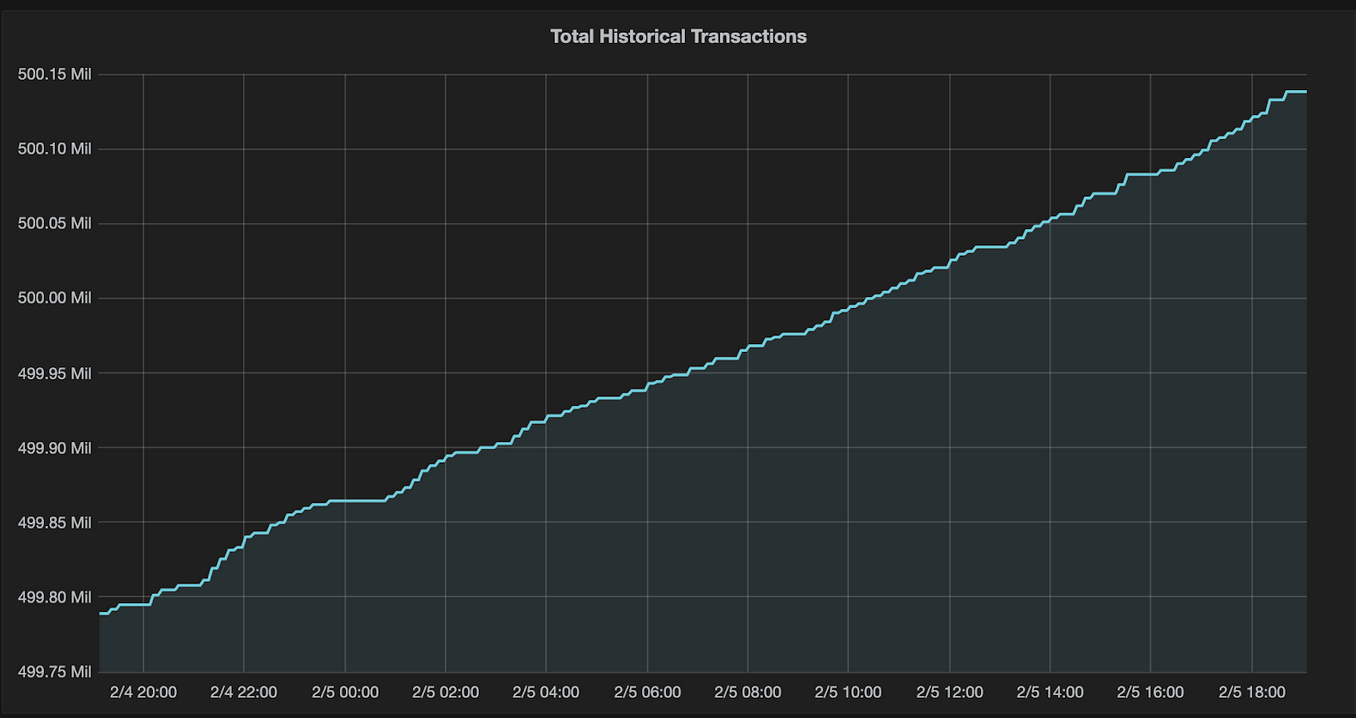 From the First Bitcoin Transaction to Today’s Milestone

The first-ever Bitcoin transaction took place on Jan. 12, 2009. Nakamoto and the late Hal Finney were the early contributors to the project. Nakamoto sent Finney 10 BTC as a test, after which the computer scientist began mining blocks himself.

The first-ever transaction of Bitcoin for physical goods took place on May 22, 2010. The famous Bitcoin Pizza saw two pizzas bought for 10,000 BTC by Laszlo Hanyecz. The programmer had offered users on a Bitcointalk forum the BTC in exchange for two pizzas. A teenager named Jeremy Sturdivant, nicknamed Jercos, accepted the Bitcoin and sent Hanyecz two pizzas from Papa John’s. This marks the first commercial transaction for Bitcoin.

After 11 years, Bitcoin is now hitting another major milestone of passing half a billion transactions. As Twitter user Hodlonaut tweeted:

“Bitcoin isn’t talking about this. Or about how revolutionary and unprecedented its traits of censorship resistance and immutability are. Bitcoin just is. And does. Once block at a time.”

The bullish sentiment continues to build in the crypto market as numerous altcoins post double-digit gains on a daily basis. Bitcoin’s spot price (BTC) on crypto exchanges also continues to push higher with the passing of each day and earlier today the price broke above $9,800, extending to $9,862 before pulling back to trade around $9,650.

Recently published data from Skew Markets shows Bitcoin futures with a May 2020 and June 2020 expiry date rising to $10,000 and above at a handful of exchanges. This further reinforces the general belief that Bitcoin’s bullish trend will continue for the foreseeable future.

Bitcoin futures Open Interest (OI) at BitMEX has also risen to a new high at $1.5 billion. Open Interest simply highlights the size of contracts that buyers and sellers have open on the exchange. The recent narrative amongst traders suggests that when OI reaches $1 billion the market dumps and Bitcoin price contracts.

Generally, most crypto traders track the fluctuations in OI to determine the strength of bullish and bearish trends in Bitcoin’s price action. When Bitcoin price and OI increase in tandem analysts infer that the trend is strong, whereas the opposite conclusion is reached when the price, volume, and OI move against each other.

Interestingly, the $1 billion threshold on OI has been breached, yet Bitcoin price continues to rally higher each day.

OI has risen across a number of exchanges over the past few weeks and today Bakkt followed the trend as the number of open futures positions reached a record high at $13 million on Feb. 5.

The same phenomenon occurred at the Chicago Mercantile Exchange, where Bitcoin futures reached a new 5-month high at $249 million.

The overall cryptocurrency market cap now stands at $276.2 billion and Bitcoin’s dominance rate is 64.3%. As the dominance rate fluctuates and Bitcoin struggles to gain above $9,800, altcoins have continued to press higher, producing double-digit gains.

Open interest, or the number of open futures contracts, rose to $13 million, surpassing the previous record high of $12 million reached on Feb. 3, according to data analytics firm Skew.

Open interest has risen sharply, by 13.6 percent from $5.5 million to $13 million over the past two weeks. Open positions on the Chicago Mercantile Exchange’s bitcoin futures also jumped to a five-month high of $249 million on Wednesday – up 34.5 percent from $185 million seen two weeks ago.

Analysts keep track of changes in open interest to gauge the strength of price moves.

An uptick in price along with a rise in open interest indicates there is strength behind the move higher. A trend is said to be lacking substance when the two metrics move in opposite directions.

Meanwhile, trading volumes in Bakkt futures have been in a declining trend since hitting a record high of over $44 million, or 6,601 BTC, on Dec. 18.

As of Feb. 5, trading volume was $27 million, of which $16 million came from the physically settled futures.

Volumes on CME, however, have held strong, with seven sessions in the last two weeks registering more than $500 million volume, as noted by Skew.

Since then, a slight correction has sent BTC/USD a shade lower — it currently trades at $9,800, while CME’s futures are hovering around $9,900.

Considerable enthusiasm has accompanied sustained price momentum for Bitcoin throughout the past week’s trading.

After challenging $9,000 support on Feb. 4, an abrupt upward surge saw the largest cryptocurrency reach new local highs of $9,840 — its best position since mid-September.

As Cointelegraph reported, Bitcoin’s year-to-date performance currently stands at more than 35%, second only to Tesla stock in terms of gains since Jan 1.

For Cointelegraph Markets analyst filbfilb, press-time levels represented an important watershed for BTC/USD, with a major move in either direction a strong possibility.

“Overall picture is good going into the close… Would be glorious if CME takes us across 10k into the close,” he summarized to subscribers of his Telegram trading channel on Friday.

Filbfilb added that he eyed potential support at $9,550 should a sell-off ensue.