Which Cryptocurrencies Matter Most To The Market? The Assets That Matter Most In Crypto (#GotBitcoin?) 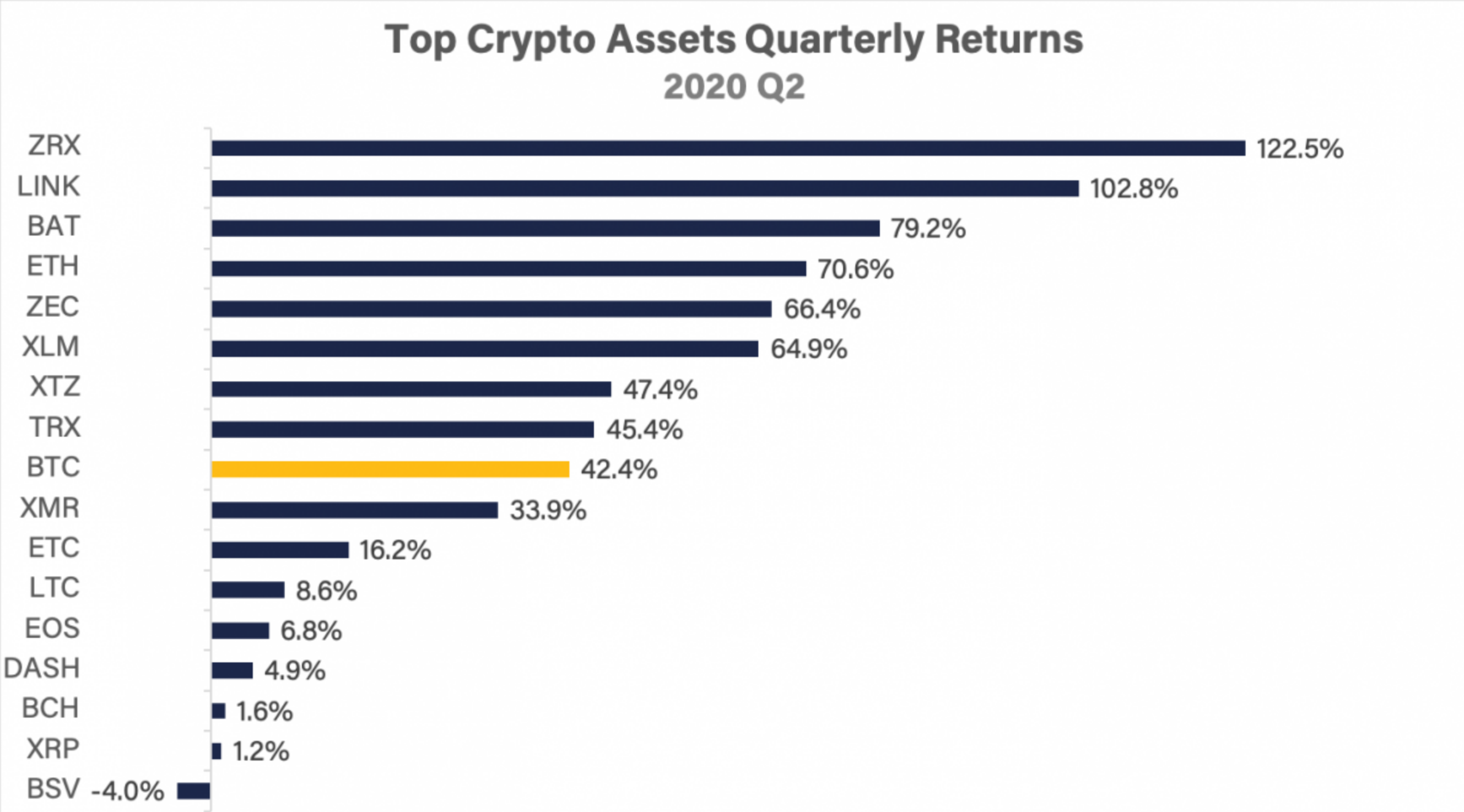 That question gets tougher to answer every day as new digital assets join the thousands already traded. Those looking to figure out which ones are the most important have often used simple metrics such as market capitalization to sort through the Lego pile of coins and tokens. Such simplistic filtering tells only part of the story and is fraught with the potential for manipulation. (Read Anna Baydakova’a recent article for a salient illustration.)

That’s why CoinDesk has launched the CoinDesk 20. This group of 20 digital assets makes up most of what people mean when they say “the cryptocurrency market.” But volume is not the sole criterion for inclusion.

While these 20 cryptocurrencies, tokens and stablecoins together are worth more than 90% of the entirety of the crypto market, the list is not derived simply from valuations. Rather, it involves a smarter way to find the assets most relevant to the market.

It starts with the exchanges. But not every exchange – far from it.

On the wild frontier of crypto trading, hundreds of exchanges pop up all the time. Few are trustworthy and reliable. Only a sliver have done what they can to remove manipulation.

CoinDesk’s research team analyzed several studies on the veracity of trading volumes on cryptocurrency exchanges. The team settled on reports from three different outfits – Bitwise, The Block and Digital Asset Research – as the ones deemed to have the soundest research. Of the dozens of venues the reports analyzed, only eight exchanges appeared on all three. Those eight are Bitfinex, Bitflyer, Bitstamp, Coinbase, Gemini, itBit, Kraken and Poloniex.

Notably absent from the list are Huobi, OKEx and Binance, the last perhaps the largest cryptocurrency exchange in the world.

That’s because each of them is absent from at least one of the above lists. To be sure, each of those exchanges offers traders price discovery on some key markets. However, in some of the reports the researchers found sufficient cases of questionable volume on those exchanges to raise some doubt about their reliability. Their exclusion from the CoinDesk 20 may be revisited in the future.

From the group of eight exchanges, CoinDesk added up the volume on every asset traded by quarter, using data provided by Nomics. Any cryptocurrency or digital asset that doesn’t trade on at least two of the eight exchanges didn’t qualify for the CoinDesk 20 because having an asset trade on more than one exchange enables arbitrage opportunities should prices move too far out of whack from one venue to another. That ensures the price and volume data reflect the true market.

We then ranked the cryptocurrencies by volume over the last two consecutive quarters. Performing the ranking over two quarters filters out any asset that would have, say, one active month but otherwise show no sustained trading volume. Using the same model, CoinDesk will re-run this analysis every quarter and update the list accordingly.

It should be noted Bitwise no longer includes Bitfinex’s prices in how it calculates its index values, a separate operation from its “real volume” calculations. It’s the latter that matters in the methodology for selecting the CoinDesk 20.

Bitwise continues to include Bitfinex in the exchanges contributing to that measure of volume, the data for which continues to be updated and published. Bitwise removed Bitfinex from its index pricing sources in 2019 after the New York Attorney General filed a lawsuit against the exchange. It did so due to concerns about prices deviating in the future should anything happen in the legal case. However, in an email Wednesday, Bitwise’s head of research told CoinDesk, “We still very much believe that Bitfinex has real volume.”

The Bitwise real volume report of March 2019 also notes that Bitfinex used market surveillance tools to “help detect market manipulations, such as spoofing and wash trading through the real-time and historical analysis of trades, order books and other market information.” This set it apart from some other exchanges Bitwise surveyed, including Binance. So did the fact that Bitfinex registered as a money services business with the U.S. Treasury Department’s Financial Crimes Enforcement Network (FinCEN).

As it turns out, the 20 assets making up the first quarterly construction of this filtered list comprise 99% of all the trading volume on the eight exchanges. What’s more, as of June 17, the current CoinDesk 20 represented $239.38 billion in market cap, according to data compiled by Messari. The remaining 5,145 cryptocurrencies were worth $25.85 billion. That makes the CoinDesk 20 representative of 90.3% of the entire cryptosphere’s market cap.

By the same token, the CoinDesk 20 is not a ranking of the relative worth or importance of each crypto or blockchain project. It is not a judgment on the quality of the technology or the caliber of the team developing it. No doubt some readers will have strong opinions on why this or that asset should be in the CoinDesk 20 and why others shouldn’t be. No doubt, over time some newcomers will join this list and existing assets will drop off it. For now, though, these are the results of a clear, objective approach using reliable data. 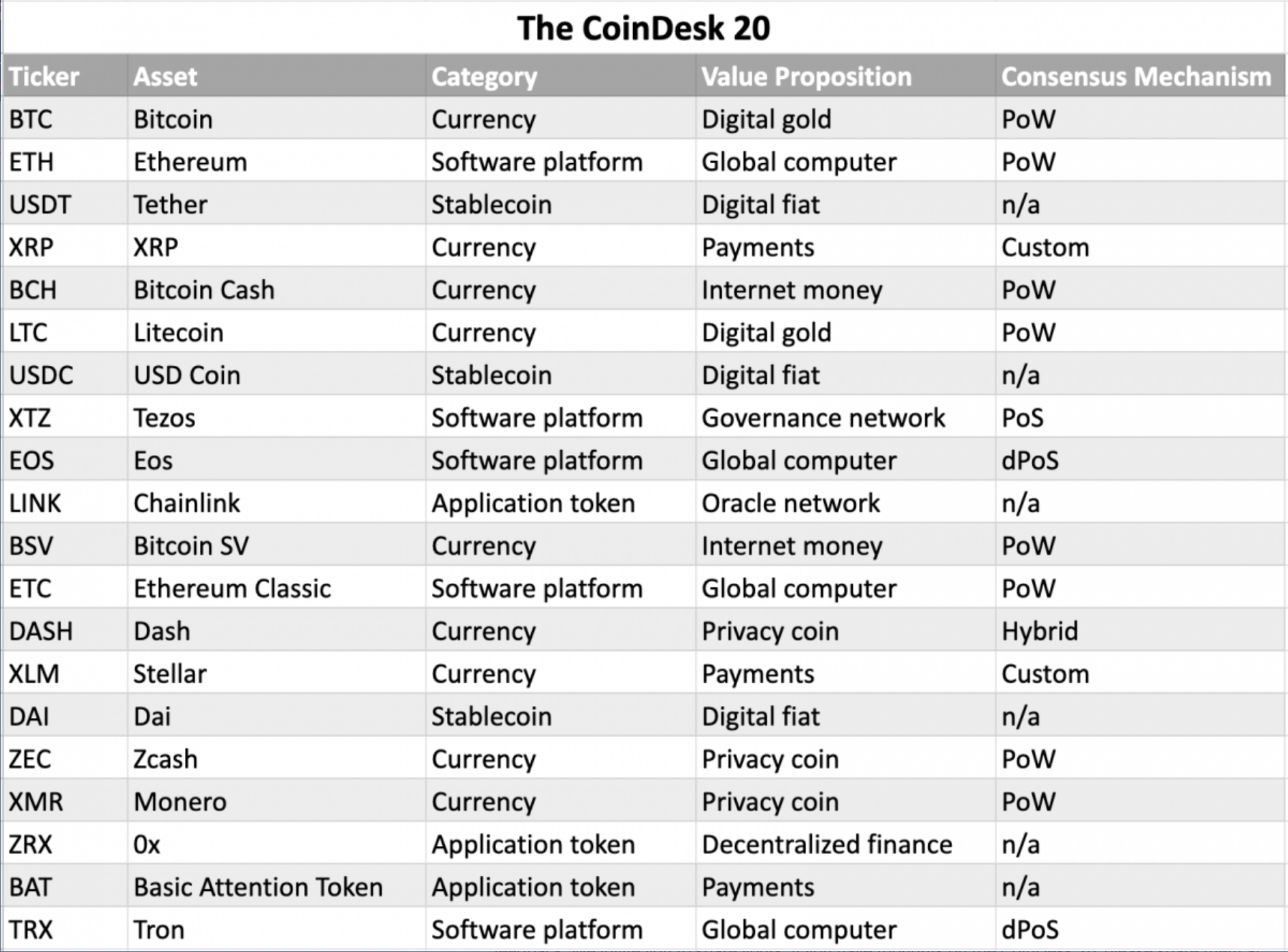 Likewise, compiling the best data in crypto often requires trade-offs. Such is the case when viewing tether (USDT) on the CoinDesk 20 asset page. As we go live, the market cap shown for the stablecoin is roughly $6 billion. Yet, this is only the value of the token as found on the Ethereum blockchain. In fact, tether also operates on the Omni, Tron, EOS, Liquid, Algorand, and SLP networks. Those are valued at an additional $4.9 billion, and CoinDesk is working on a way to incorporate accurate and timely figures for these other blockchains into the total number.

CoinDesk is doing more than just making a list of assets, however. In addition, investors, traders and researchers are provided with a deep dive into the data they need to make educated decisions about these 20 digital assets.

Each individual asset page contains information about the type of currency, its returns, volume, volatility, transactions, fees, value proposition and consensus mechanism, to name just a few of the data points. This will give anyone researching the asset a clearer sense of how it relates to others and to other asset classes.