The U.S. intelligence community’s approach to classifying vast amounts of information is so flawed that it harms national security and diminishes public trust in government, according to Avril Haines, President Biden’s director of national intelligence. 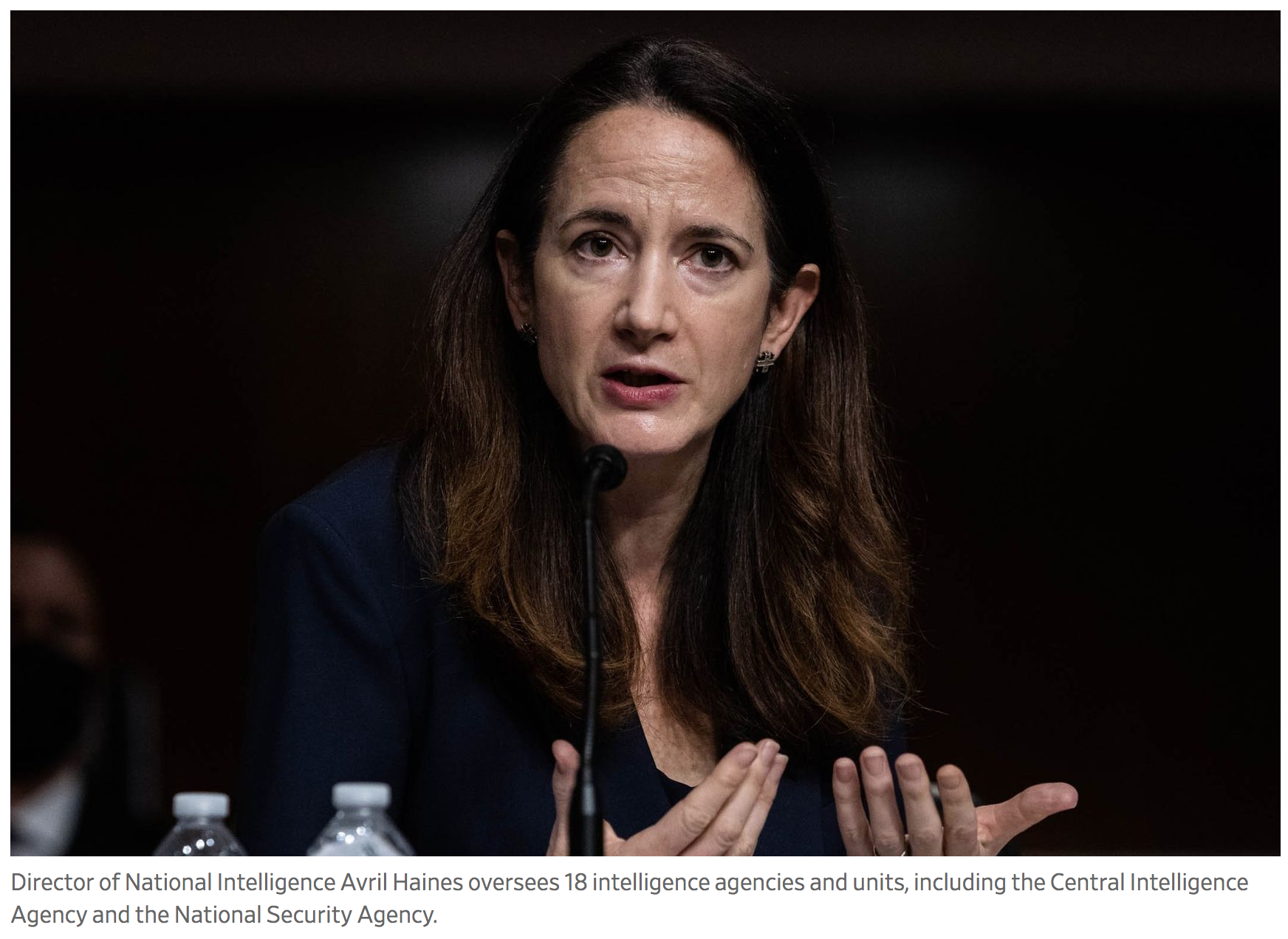 The acknowledgment of such concerns about how the nation’s spy agencies choose what information to keep secret under various classification levels is among the most significant by a president’s sitting intelligence chief, government transparency advocates said, and could indicate broader interest in the Biden administration for loosening restrictive access to some of the government’s growing collection of secrets.

“It is my view that deficiencies in the current classification system undermine our national security, as well as critical democratic objectives, by impeding our ability to share information in a timely manner” with allies, policy makers and the public, Ms. Haines wrote in a letter earlier this month to Sens. Ron Wyden (D., Ore.) and Jerry Moran (R., Kan.), which was reviewed by The Wall Street Journal.

The letter was in response to an October request for information from the senators, who have pushed for overhauls of the declassification system to assist federal agencies struggling to process a large volume of secret information that is no longer sensitive, such as backlogged historical records Congress has said must be released. Messrs. Wyden and Moran have said classification costs taxpayers about $18.5 billion annually.

It is not publicly known how much information is classified by the government, but watchdogs and open-government activists believe such a trove is likely to include billions of records and is rapidly expanding, in part because of the explosion of digital communications.

Such secrecy, Ms. Haines wrote, “reduces the intelligence community’s (IC) capacity to effectively support senior policy maker decision-making, and further erodes the basic trust that our citizens have in their government. It is a fundamentally important issue that we must address.”

Despite numerous reviews looking at problems with classification, Ms. Haines said current efforts to address the exponential growth of classified material “are simply not sufficient.”

Government transparency advocates have argued for decades that the classification regime among intelligence agencies is overly restrictive and prevents the public from knowing what the U.S. government is doing on a range of security issues, such as drone strikes in foreign countries, surveillance practices at home and abroad, and offensive cyber operations.

Often unflattering information—such as civilian deaths from drone strikes—only comes to light after Freedom of Information lawsuits from media organizations, or if an official risks years of jail time by leaking classified material.

“Some of the most consequential decisions our government makes are related to national security,” said Alex Abdo, a lawyer with the Knight First Amendment Institute at Columbia University, which advocates for more government transparency.

‘Some of the most consequential decisions our government makes are related to national security.’
— Alex Abdo, Knight First Amendment Institute at Columbia University.

Ms. Haines, 52 years old, is the first woman director of national intelligence, a job that oversees 18 intelligence agencies and units, including the Central Intelligence Agency and the National Security Agency, which employ hundreds of thousands of federal workers and contractors.

She has previously expressed concerns about the classification system in intelligence agencies, but never before as starkly or substantively. In a book chapter published last year, but written before she became the nation’s intelligence chief, Ms. Haines identified overclassification as a problem in part because “it actually encourages leaking.”

In her letter, Ms. Haines included two declassified efforts under way at the National Geospatial-Intelligence Agency and the Department of State to address the intelligence community’s classification issues, both of which involve efforts to modernize and digitize records to make them easier to search and identify in order to more quickly release material to the public.

The senators said Ms. Haines had offered to work with them on overhauls, and that they had asked her to coordinate with the White House on potential updates to the presidential executive orders governing the classification system.

An aide to Mr. Wyden said additional examples of efforts to improve declassification work included in Ms. Haines’s letter were shared with Messrs. Wyden and Moran but marked “for official use only,” a government designation assigned to documents that, while not technically a classification level, limits the public’s access to them.

A senior intelligence official said those examples were downgraded to that level to enable wider circulation in Congress, but because they include information about pending budgetary decisions, they couldn’t be made public.

About four million people have some level of security clearance in the U.S., including about one million contractors, according to recent federal estimates. The number has fluctuated but drawn bipartisan scrutiny in Congress for years amid worries of insider threats—employees who steal classified national security information and disclose it to a foreign power or to the public.

Mr. Abdo said the Biden administration had taken encouraging steps over the past year to be more transparent, including the declassification of an intelligence report on the murder of Saudi journalist Jamal Khashoggi—which had been written during the Trump administration but never released—and the decision by Mr. Biden not to assert executive privilege over documents from the Trump White House related to the Jan. 6 attack on the U.S. Capitol. But Mr. Abdo said he was still skeptical about the Biden administration’s overall commitment to overhauling the classification regime.

“People lose their jobs or get prosecuted if they release information that they shouldn’t, but they face no consequences for failing to disclose something the public needs to know,” Mr. Abdo said. “Unsurprisingly, that has bred a culture of secrecy in government.”

Battles over classification have recently centered on former officials attempting to publish books about their time in government that are subjected to a process known as pre-publication review. Typically, government employees and contractors with access to classified information must submit any published works—even works of fiction—to their agency for reviews.

Some former Trump administration officials have sought to publish books about their encounters with the former president, including former Defense Secretary Mark Esper, who sued the Pentagon in November for redacting portions of his manuscript.

Lawyers in a separate case—including Mr. Abdo of the Knight First Amendment Institute—that involves several former intelligence officials who have sought to publish writings on their government service have appealed to the Supreme Court after losing in lower courts.

Their lawsuit argues that the pre-publication review is overly restrictive and violates freedom-of-speech protections. The government has countered that the reviews don’t violate the First Amendment and are necessary to protect national security.