Drones Come to The Mainstream 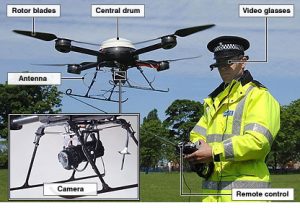 Thanks to a proliferation of inexpensive sensors, chips, cameras and other gizmos that can be tacked onto wannabe spy planes and helicopters, it’s easier than ever for technologists to build craft that fly themselves. Drones Come to The Mainstream

The techies are sending the three-to-six foot wide drones, guided by computers, radios and soon cellphones, to survey fields, capture action shots from the air or follow them around to snap photos at optimal angles. About their only constraints: a 400-foot ceiling for amateur drones set by the Federal Aviation Administration–and battery life.

A product designer in San Francisco, has built about a dozen drones for $150 to $1,000 each. He says he spends at least 20 hours a week tweaking and flying them. He says drones have allowed him to capture some hard-to-get photos of the Bay Area–including an image of himself on top of Corona Heights shot from far away.

Another hobbyist, pilots a drone as pedestrians watche in Berkeley.

A product designer, who helped design the Flip video camera, is working on technology that allows the drones to be controlled via iPhones and Android devices. He also recently built drones with a fancy chip that can process inputs from three gyroscopes, three accelerometers and a compass.”We’re ahead of the phones,” he says, who adds that he prefers the helicopters to the airplanes, because they are easier to test in his backyard.

At Berkeley Marina, a software engineer at Walt Disney Co.’s Pixar Animation, takes his airplane drone and “quadcopter” out for a spin almost every weekend. His fanciest drone is equipped with a camera that allows him to see what it sees by wearing goggles. “It’s very similar to being in the air,” he says.

The drone subculture in Silicon Valley reflects the widening use of unpiloted aircraft by the U.S. military and law-enforcement agencies. Some entrepreneurs are imagining businesses based on the gadgets, a brainstorm of some computer programmers, which would deliver a taco to a customer’s door.

The growth and increased sophistication of the toy vehicles has raised questions about whether the technology should be in hobbyists’ hands. Privacy advocates, meantime, have raised concerns that drones could be used for surveillance.

The FAA allows amateurs to fly drones for fun, as long as they stick to rules like not flying the machines over people and keeping their drones below 400 feet and in their line of sight. The FAA has said it plans to allow commercial use–meaning businesses that deploy drones, such as the one designed deliver a taco–in the coming years.

Meanwhile, demand is increasing for instruction on how to build a drone. A workshop for hackers in Oakland, plans to hold sessions for building 10 to 20 drones in coming months. The president who works on security communications for the Mozilla Foundation, says building a drone can be detailed, requiring soldering, other mechanical skills and uploading software to run the hardware.

“If things go crazy, it will fly in your face,” He says of the devices. One of the trickiest steps is calibrating a drone to fly outdoors based on the wind and other variables, he adds.

Some are proving drone-building can be a business. In 2009, a drone evangelist, co-founded a drone-building company in San Diego. The firm sells drone parts, such as electronic pilots and sensors. He says it is growing at 50% a year and has multimillions in revenue.

He likens the community of hobbyists to Silicon Valley’s Homebrew Computer Club in the 1970s, where Apple Inc. co-founders Steve Jobs and Steve Wozniak showed off their first personal computer. At the time, the future uses of computers weren’t clear, he says, with the software applications materializing over time. “I think drones will go the same way.”

Organizations That Have Sought to Use Drones

Police departments and universities nationwide have obtained licenses from the FAA to use drones, according to data obtained via Freedom of Information Act requests by the Electronic Frontier Foundation, an advocacy group. See a list of what groups have requested licenses, and the status of that request.

Unmanned drones are shrinking — yet their presence in the U.S. military arsenal is growing.

AeroVironment’s Wasp AE represents the latest evolution in unmanned aerial vehicles (UAVs). The Wasp has been used by the U.S. military for small unit work ranging from reconnaissance and surveillance to tactical intelligence. Hand-launchable at just 2.8 pounds and 16 inches from wingtip to tip, the new model flies 20 percent longer than its predecessor.

The company’s work more than a decade ago on the Black Widow program resulted in a 6-ounce, 6-inch wide micro vehicle that laid the groundwork for today’s micro drones.

And after a year of evaluation and user testing, the U.S. Air Force gave it the stamp of approval, announcing May 22 that the Wasp AE will be included in its Battlefield Air Targeting Micro Air Vehicle (BATMAV) program and placing an order for nearly $2.5 million.

On May 16, the U.S. Army ordered more than $5 million worth of the companion Switchblade UAV, adding to a previous order for $4.9 million.

Able to land on either land or water, the Wasp is fit for both ground warfare and maritime operations. It can relay encrypted video, and voice, text and data, and a miniaturized Mantis i22 AE sensor package lets it capture both color and infrared imagery.

The kicker is that the Wasp is interoperable with other unmanned systems — meaning it is capable of working as a team with other machines to attack the enemy.

While a digital data link lets it work with a variety of other drones — with names like the Puma, Raven and Shrike — the coolest tag team is clearly its partnership with the Switchblade.

In this pairing, Wasp provides the eyes in the sky as Switchblade, also developed by AeroVironment, provides the firepower.

Known popularly as “the kamikaze drone,” the Switchblade works sort of like a grenade and can be guided to a target and set to explode upon impact.

With its micro size and quiet electric propulsion, the Switchblade is difficult for an enemy to track and can arrive on target without detection.

Like the Wasp AE, Switchblade can be either autonomous or remotely controlled by an operator. This lethal platform can recognize objects and provide real-time GPS coordinates and video.

At 5.5 pounds, it fits in a backpack and lets a soldier unleash munitions against even out of sight targets within minutes.

The four-winged UAV is housed in a small tube that is readily pulled out of a backpack and launched from a vehicle, ship or off the ground with a remote controller. When Switchblade has been released, its wings spring open, its propeller starts spinning, and it can move at up to 85 knots (nearly 100 miles per hour).

Switchblade can lock on to a target, and can follow even if it moves — switching off and re-engaging later if need be — meaning minimized collateral damage.

Picture a small unit that comes across insurgents hiding IEDs (improvised explosive devices) and planning to attack U.S. forces. With a Switchblade that unit can immediately strike, remaining safely out of harm’s way.

Teams often have to compete with other units for UAV support — this could help reduce the wait for such key airstrike support, and prevent the enemy from slipping away.

The Air Force has also been using Switchblade — and now the Marine Corps is moving toward procurement as well, to enable its small units to strike more quickly.

Two little machines that fit in a backpack — but the potential is great.