OK, Computer: How Much Is My House Worth? (#GotBitcoin)

Proposed regulations would allow the majority of homes to be bought and sold without being appraised by a human. OK, Computer: How Much Is My House Worth? (#GotBitcoin) 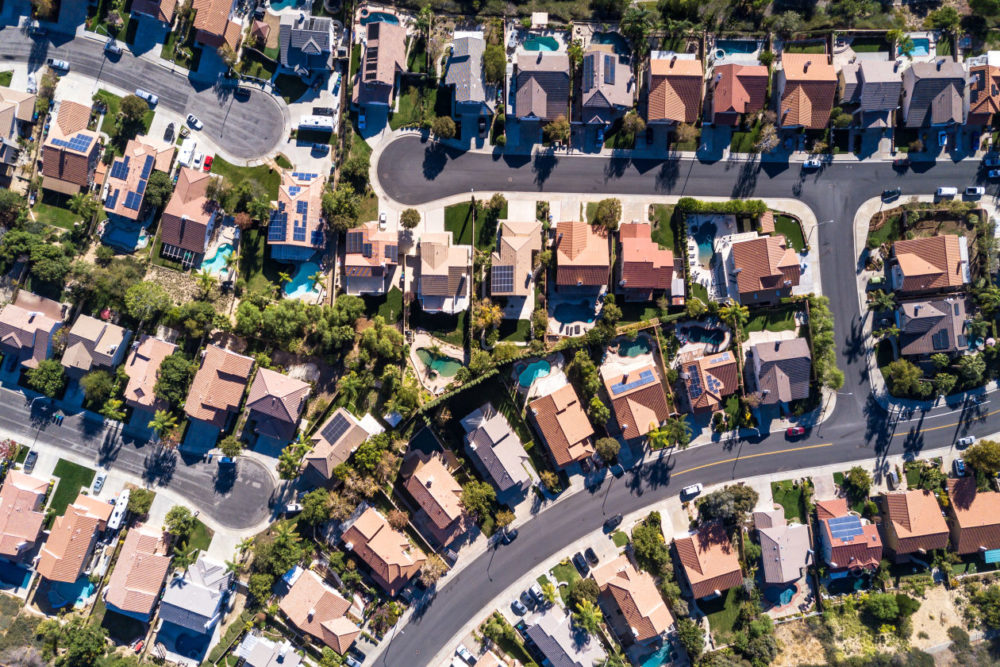 Top-Down Aerial Shot Of Suburban Tract Housing Near Santa Clarita, Calif. Proposed Regulations Would Enable Property Valuations Based On Computer Algorithms.
The battle between man and bot has a new front: your mortgage.

Federal regulators have proposed loosening real-estate appraisal requirements to enable a majority of U.S. homes to be bought and sold without being evaluated by a licensed human appraiser. That potentially opens the door for cheaper, faster, but largely untested property valuations based on computer algorithms.

The proposal was made earlier this month by the Office of the Comptroller of the Currency, the Federal Deposit Insurance Corp. and the Federal Reserve. It would increase to $400,000, from $250,000, the value of homes that can be bought and sold without a tape-measure-toting appraiser visiting a property.

More than two-thirds of U.S. homes sell for $400,000 or less, according to U.S. Census data and the National Association of Realtors. If the regulators’ proposal had been in force last year, about 214,000 additional home sales, or some $68 billion worth, could have been made without an appraisal, regulators said in their 69-page proposal. 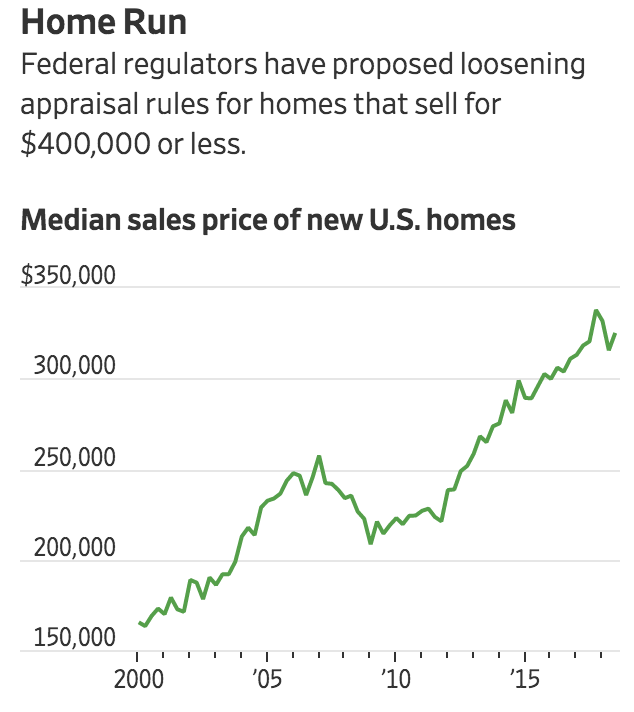 Some worry, though, that dropping appraisal requirements would introduce new risks into the $10.7 trillion market for home loans.

New Ways To Profit From Renting Out Single-Family Homes (#GotBitcoin)

Investors Are Buying More of The U.S. Housing Market Than Ever Before (#GotBitcoin)

Phoenix Provides Us A Glimpse Into Future Of Housing (#GotBitcoin?)

“We still would prefer a human being doing the appraisal,” said Lima Ekram, a mortgage-backed securities analyst at Moody’s Investors Service.

One Issue: Automated valuations done by computers are largely unregulated. The 2010 Dodd-Frank financial overhaul required regulators to propose quality control standards for so-called automated valuation models, but they have yet to do so.

“There are a lot of problems with appraisals, but there are voluminous standards,” said Ritesh Bansal, chief executive of Appraisal Inc., a New York-based provider of automated valuations. “On the AVM side, it’s a wild, wild West. And that just invites abuse of all kind.”

Regulators say the immediate effect of dropping appraisal requirements would be limited because a vast majority of home loans in that range are bought these days by mortgage giants Fannie Mae and Freddie Mac , or guaranteed by other federal agencies. Those typically require appraisals regardless of home value.

Appraisals help “ensure that the estimated value of the property supports the purchase price and the mortgage amount,” regulators wrote in their proposal. “However, the agencies also are aware that the cost and time of obtaining an appraisal can, in some cases, result in delays and higher expenses.”

Scrapping the appraisal requirement would open a swath of new turf for upstart property valuation companies, like HouseCanary Inc., which use artificial intelligence, algorithms and sometimes even drones to value homes. Jeremy Sicklick, the company’s chief executive, said that replacing appraisers with computers will speed up home sales by weeks, reduce costs for buyers and eliminate human bias and error from the process of valuing mortgage collateral.

“The technology has reached the level to where this change creates a win-win for the consumer and lender,” Mr. Sicklick said.

Although appraisals are based on criteria such as sales of recent comparable homes, they are sometimes more art than science. And appraisers came under fire following the housing crisis, shouldering much blame for inflating home prices at lenders’ behest.

Their latest turf battle comes months after a defeat at the hands of lawmakers rolling back some financial-crisis-era banking rules. That change eliminated a chunk of appraisers’ business by exempting many rural properties from appraisals.

“The appraisal profession is suffering a death by a thousand cuts,” said Joan Trice, chief executive of Allterra Group, a Maryland firm that tracks the industry.

Since the housing crash, the number of appraiser credentials in the U.S. has declined about 21%, to fewer than 96,000, according to a federal group that governs the profession. Some lenders have complained appraisers in booming and rural markets are in short supply.

Last autumn a rural Tennessee bank asked federal regulators to waive appraisal requirements and allow an employee with some appraisal training to value collateral. The request was denied, but it sparked national debate over whether there are enough appraisers, and how homes might be valued without them.

Appraisals typically cost between $375 and $900 for a single-family home. Valuations produced by the likes of HouseCanary often cost less than $100 a house. So do broker price opinions, which are a sort of perfunctory assessment performed by real-estate agents and even outsourced to office workers in India who use online data.

Banks and Wall Street investors use these alternatives to price portfolios of houses and home loans, since valuations that are too high or low tend to balance out over pools of thousands of properties.

Appraisers argue that approach is unsuitable for home purchases, though. An appraisal that is off by a few percent could leave a homeowner owing more than their house is worth or lenders with insufficient collateral to cover defaulted loans.

“There’s still no computer that can see, hear, taste, smell and touch,” said Pat Turner, an appraiser in Richmond, Va. “Have you ever been in a hoarder’s house?”

Fractional ownership of buildings and property developments is becoming one of the adoption areas for blockchain technology in the real estate business. From democratizing access to real estate investment to improving liquidity in the market, there is an argument to be made for tokenization being a net positive for the real estate space.

Tokenization via fractional real estate investment is also another example of the emerging “sharing economy” that seems to be encouraging crowdfunded ownership, a trend that could help to decentralize the global asset market across several sectors.

With Millennials, the maiden generation of digital natives entering their peak spending years, the digitization of the real estate market could see greater interaction in the market from this particular demographic.

However, as is the case with fractional ownership as a whole, tokenized real estate investing does come with its share of drawbacks. Given the novel nature of the enterprise, financing options can often be limited, leading to less liquidity in the market and an overall flexibility deficit.

While the approval covers tokenized investments in physical and digital goods, Fraction’s first focus is on fractional real estate investment and will reportedly utilize an initial fraction offering (IFO) vehicle.

According to the company’s announcement back in September, IFOs will provide easier entry into the high-end real estate market for prospective investors. IFO tokens will represent fractional ownership of luxury real estate listings for as low as $150, presumably lowering the barrier for greater participation in the market.

Back in January, Fraction listed its first property on its proprietary exchange platform, a condo unit located in On Nut, Bangkok, Thailand. According to details on the company’s website, the process involved the total digitization of the title deed followed by the fractionalization of the ownership of the property before offering tokenized ownership of these fractions via an IFO.

Speaking to Cointelegraph, Josh Stech, co-founder and CEO of Sundae — a digital residential real estate marketplace platform — highlighted the merits of tokenization and fractional ownership in the market. “Investing in residential real estate is one of the biggest opportunities for wealth creation, and sadly, it’s accessible mainly to the wealthy,” Stech said, adding:

“Tokenizing residential real estate on blockchain has the promise to provide efficient and open access to the largest asset class in the U.S. not just for younger people but for anyone who wants to invest in real estate without having the funds for an entire property transaction.”

Real estate tokenization is still in its infancy and remains a niche aspect of the market. However, industry insiders say there is potential for massive growth with British accounting network Moore Global estimating that the tokenized real estate market could achieve a $1.4-trillion valuation by 2026 on the back of tokenizing only 0.5% of the current global property market.

While the tokenized real estate space does show some promise, there are a few significant issues that need to be addressed. Lack of liquidity especially in the secondary market, institutional hesitancy and absence of regulatory clarity are among some of these major hurdles.

“I believe that to propel the real estate tokenization market, we will need to see some more institutional comfort level with tokenized assets, which is coming. The market is already seeing an influx of institutional-grade projects. The market also needs to experience innovation in the area of dedicated real estate platforms, which allow investing in tokenized real estate assets without investors having to deal with the underlying blockchain complexity.”

The SPiCE VC founder added that these dedicated platforms that deal in tokenized real estate assets are essential for improving liquidity in the market. According to Elyashiv, such platforms will make token-based real estate investing more intuitive.

For now, tokenized real estate remains fragmented with different projects providing their own somewhat limited platforms while navigating sometimes vague regulatory provisions. However, there have been a few notable developments in the market.

In the summer of 2020, Overstock’s regulated tZERO exchange platform started trading a security token that represented fractional ownership of a luxury resort in Colorado. The launch attracted record trading volume at the time, but the initial enthusiasm was likely dampened by the market slowdown occasioned by the coronavirus pandemic.

In September, RealX, a fintech firm based in Pune, India, launched a blockchain-based registry system to enable fractional property ownership in the country. According to a previous Cointelegraph report, tZERO also partnered with real estate crowdfunding company NYCED Group to tokenize $18 million worth of properties.

Growing demand for fractional ownership could be the trigger that spurs greater adoption of tokenized real estate. With Millennials coming into their own in terms of being the dominant consumer demographic in the world, investment vehicles steeped in the ethos of the sharing economy could become even more popular within the next few years.

The current rise of the sharing economy appears to be at least in part due to the pivot toward access rather than the ownership framework that characterizes the older economic model. This preference for access-based services has in some way contributed to the success of neo-businesses such as ride-hailing, content crowdfunding, streaming service for entertainment, among others.

With cryptocurrencies, service providers and the millennial consumer class probably have a suitable mechanism to drive token-based fractional ownership.