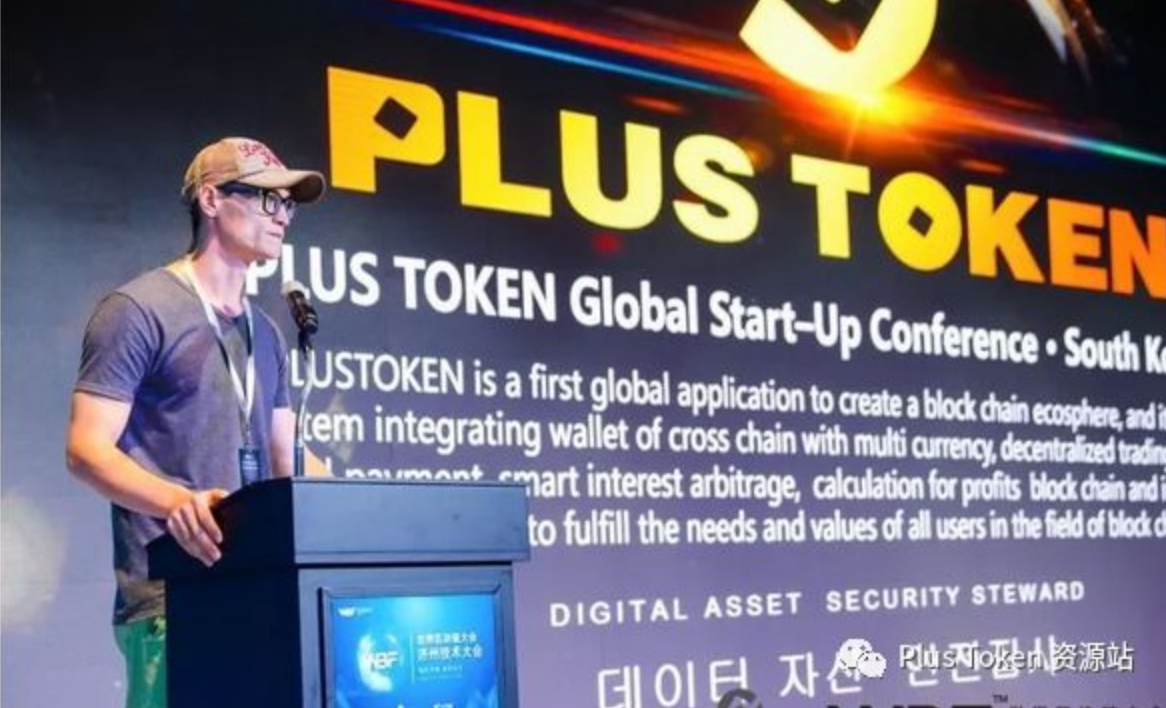 * Plustoken Scam Largest Of Many

Evidence indicates that more Bitcoin related to the PlusToken scam is moving into mixers. If true, it gives more evidence that the holders of these stolen funds are preparing to take advantage of the market recovery.

One of the many analysts following Plustoken’s suspected wallets has now provided evidence that 13,000 of the stolen bitcoins are being moved into mixers. ErgoBTC has tweeted:

Distributions still on/off. Much slower than September and November.

If true, these transfers would add to others taken recently. Last month 11,999 bitcoins connected to PlusToken began moving to unknown addresses, thus splitting them into smaller amounts that could more easily be mixed. The thieves may have been preparing to sell them as bitcoin prices were recovering and network activity was increasing.

Should the scammers successfully mix their ill-gotten gains they would be in a position to dump large numbers onto the open market. Such a move could suppress prices and stall the present market recovery. In fact, some analysts assert that PlusToken bitcoin dumping contributed to the price decline that took place in the second half of last year.
14 BTC & 30,000 Free Spins for every player, only in mBitcasino’s Crypto Spring Journey! Play Now!

Earlier attempts to obfuscate the PlusToken funds were unsuccessful, as analysts quickly tracked them across a number of mixer services. The thieves moved them many through exchanges, notably Huobi, although none have been seized.

Plustoken Scam Largest Of Many

PlusToken is reported to be the largest cryptocurrency scam to-date. Advertised as a wallet and investment service, it was nothing more than a ponzi scheme. It promised both secure storage as well as extremely high rates of return on deposits. The PlusToken operators amassed as many as 200,000 bitcoins, as well as large sums of Ethereum and EOS only to shut down last June.

The operation targeted naive and ill-informed investors, primarily from China and South Korea. In fact, few knew of PlusToken outside of these countries. Chinese authorities have arrested six men suspected to be part of the scheme, yet others have yet to be identified.

Unfortunately, ponzi schemes such as PlusToken have become common in the crypto space. They are not new, yet they are proliferating as more of the general public becomes interested in crypto investment. Stopping them will be difficult. The best defence is to take an educated, common-sense approach to storing crypto assets, and never to trust so-called “investments” that appear too good to be true.

Another important step to fight this type of cybercrime will be for nations to legitimize cryptocurrency, and for law enforcement agencies to cooperate in pursuing crypto scammers. Such moves are, to say the least, a work in progress. 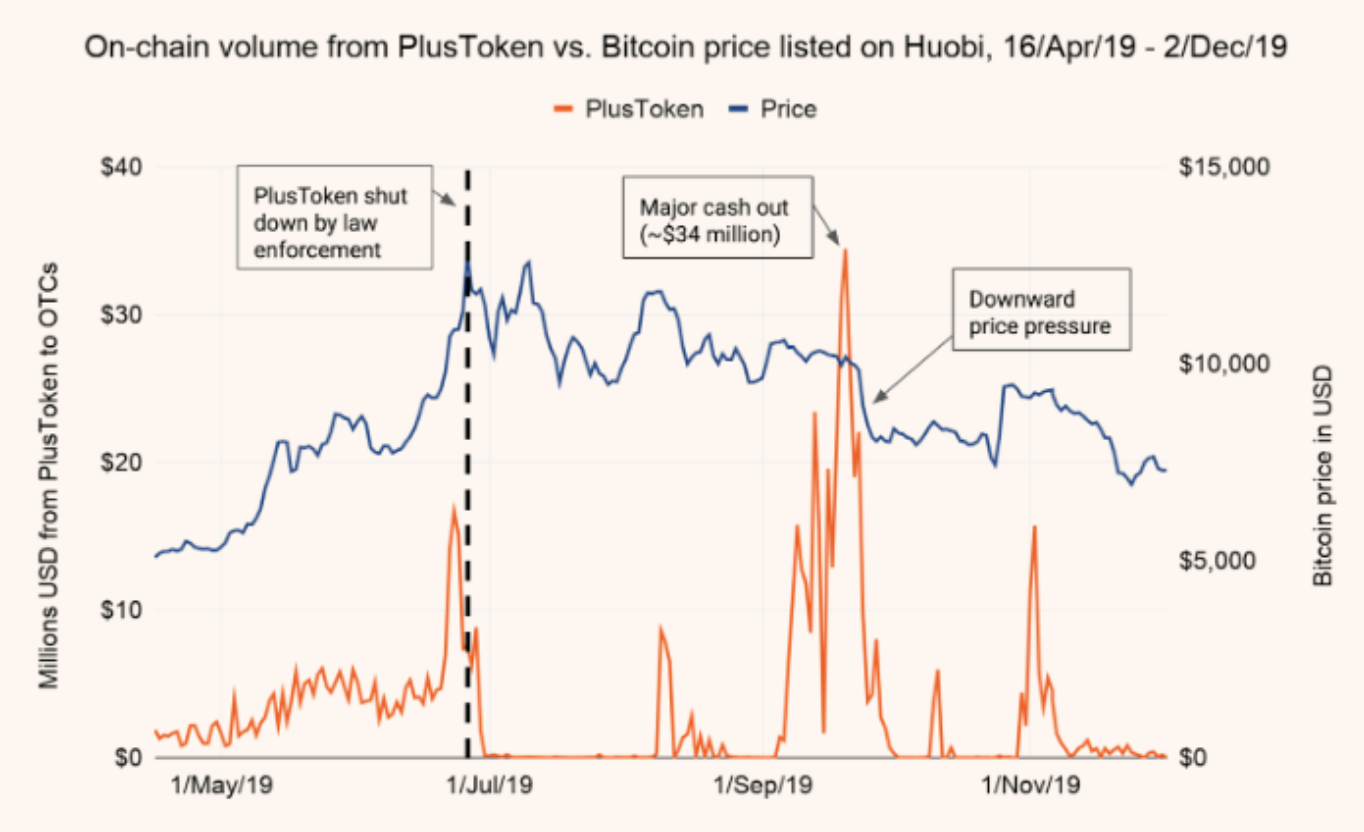 Bitcoin (BTC) began its sudden crash due to another giant sell-off from the PlusToken pyramid scheme, analysts are suggesting as BTC/USD lost $8,000 support.

According to various online commentators citing Blockchain data, participants in the $2.9 billion scheme are again attempting to rid themselves of their BTC.

Ergo, the Twitter account that closely tracks PlusToken’s activities, put the total funds involved at around 13,000 BTC or roughly $210 million at the current market price.

This time, Ergo said, the coins were going to mixing services to hide their traceability. Two feeder addresses have been identified, shedding their balances on March 5.

“Been looking and theorizing about this for months and I can’t see a scenario where the coins aren’t being sold, at least to some degree,” the account summarized.

“This was likely obvious to the exchanges starting in September. The accounts would have been frozen then.”

The account added, however, that selloffs were now occurring at a “much slower rate” compared to a more intense period of activity in August last year.

“Slamming The Market With Sell Orders”

Bitcoin price volatility appears to influence PlusToken’s activities. During the last mass fund movement several weeks ago, BTC/USD was similarly experiencing turbulence at around the $10,000 mark.

“They are slamming the market with sell orders. Essentially we have a giant whale unloading after every move up,” fellow Twitter analyst Kevin Svenson added in comments of his own on Sunday.

24-hour losses for Bitcoin investors totaled 9.5% at press time, while weekly, HODLers were down around 8.2%.

Court filings from Nov. 19 show that a large volume of crypto assets, including Bitcoin and Ether, was seized from seven convicts in the PlusToken case.

The PlusToken controversy, which has led to the arrest of 109 individuals so far, has also reportedly resulted in a titanic seizure of crypto assets by Chinese authorities worth $4.2 billion at today’s prices.

According to the ruling from the Yancheng Intermediate People’s Court, gains from the seized crypto assets will be forfeited to the national treasury. The precise details of how the assets will be dealt with and processed in accordance with national laws have not been fully spelled out.

The PlusToken scheme, which first released its white paper back in Feb. 2018, had presented itself as a South Korean crypto exchange and wallet provider that could provide users with interest-bearing accounts capable of generating between 8% and 16% returns monthly, with a minimum deposit of $500 in crypto assets.

At the time of their absorption, these funds were reportedly with close to 15 billion yuan — roughly $2.2 billion. In today’s bull market conditions, that value is significantly higher.

Some of the funds were used to incentivize members to recruit new targets, while some were cashed out for daily expenses and personal spending by the scheme’s ringleaders.

By summer 2019, the scheme had ceased operations, citing purported “system maintenance,” in what appears to have been one of the industry’s largest-ever exit scams. Chinese authorities closed in, arresting and/or detaining many of the key individuals involved.

The Yancheng Intermediate People’s Court ruling notes that 15 individuals have been convicted to date, and have been sentenced to between two and 11 years in jail, with fines ranging between $100,000 and $1 million.