Everyone is impressed with the performance of the stock market under President Trump–especially Trump. Trump Ranks Sixth In Stock Market Performance Behind Obama And Clinton

While the market has consistently gained under Trump, the gains haven’t been record-setting. From inauguration day on January 20 through October 27, the S&P 500 shows a 15.38% annualized rate of return. That’s less than the annualized percentages achieved under five other presidents.

That goes back to President William McKinley in 1897; before 1896 there were no stock indices. To gauge performance, I used the Dow Jones Industrial Average for 1897-1927, and the Standard & Poor’s 500 Index beginning with its inception in 1928. 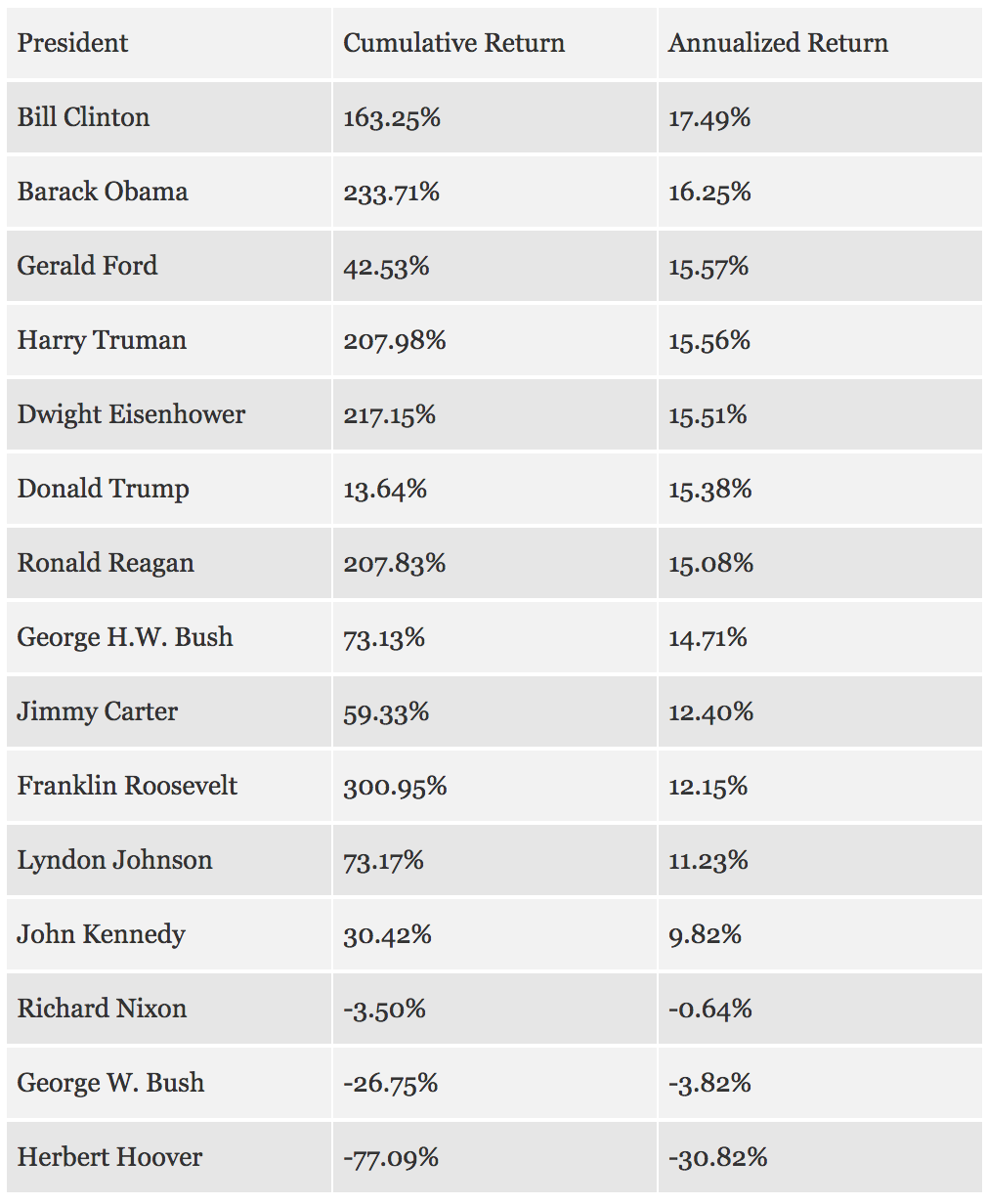 Here’s a breakdown for the 15 latest presidents, ranked by market performance as measured by the total return on the S&P 500.

Stocks have risen in nine of the first ten months of the Trump Administration, a record that no other U.S. president can match.

In his first ten months, President Trump holds the record for most up months, with nine. Close behind are William Howard Taft, Harry Truman, Lyndon Johnson and John Kennedy, each with eight.

This doesn’t necessarily bode well. Taft’s return during his full term was slightly negative. Both Johnson and Kennedy ended up with below-average stock market performance. Truman, however, ranks fourth for annualized return with 15.56%. All figures include reinvested dividends.

Franklin D. Roosevelt, Bill Clinton and Barack Obama also got off to good starts in the stock market, with seven up months in the first ten.

The worst start (by winning percentage) was Jimmy Carter’s, with only two positive months in his first ten.

Peacetime presidents have tended to do a bit better than wartime ones. Lyndon Johnson and Richard Nixon presided over the Vietnam War. Neither excelled with regard to stock market performance, and Nixon (who also had to cope with the Watergate scandal and the Arab Oil Embargo) had a negative return.

George W. Bush, president during the terrorist attack of 2001, also had a negative return, as the country struggled with how to respond to terrorism, and then with the beginning of the Great Recession, during which he appeared to many observers to resemble a deer in the headlights.

On the other hand, the market under Franklin D. Roosevelt did well in wartime, rising 117% during the three years and nine months that the U.S. was fighting in World War II. However, a few Depression-tinged bad years, notably 1937, held down his overall return.

It’s apparent from even a casual inspection of the performance table that neither Democratic nor Republican administrations have a monopoly on wealth creation. Republicans occupy two of the top five spots, and also three of the bottom five.

Ned Davis Research studied returns on the Dow Jones Industrial Average since 1901 under Democratic and Republican presidents. Their conclusion: Stocks do better on average under Democrats (7.80% to 3.25%, on the basis of price only on the Dow, disregarding dividends).

The gap narrowed when inflation was taken into account. Real returns were 3.79% under Democrats, 1.03% under Republicans.

Looking at the party balance in Congress, the Dow industrials gained 7.97% when Republicans controlled both houses, gained 5.47% when the Democrats controlled both, and lost 0.80% when Congress was split.

What does all this mean for the stock market outlook today? No one knows for sure because, as the Greek philosopher Heraclitus said, you can never step in the same river twice.

Based on history, the Republican Congress is a plus, and a Republican president is a minus. In my view, Trump is short-tempered, impulsive and disorganized. Nonetheless, his stances in favor of taxes and against regulation are likely to favor corporate profits.