80% of Americans Say The Country Is Spiraling Out Of Control, Poll Finds (#GotBitcoin?)

Americans Are More Troubled by Police Actions in Killing of George Floyd Than by Violence at Protests. 80% of Americans Say The Country Is Spiraling Out Of Control, Poll Finds (#GotBitcoin?) 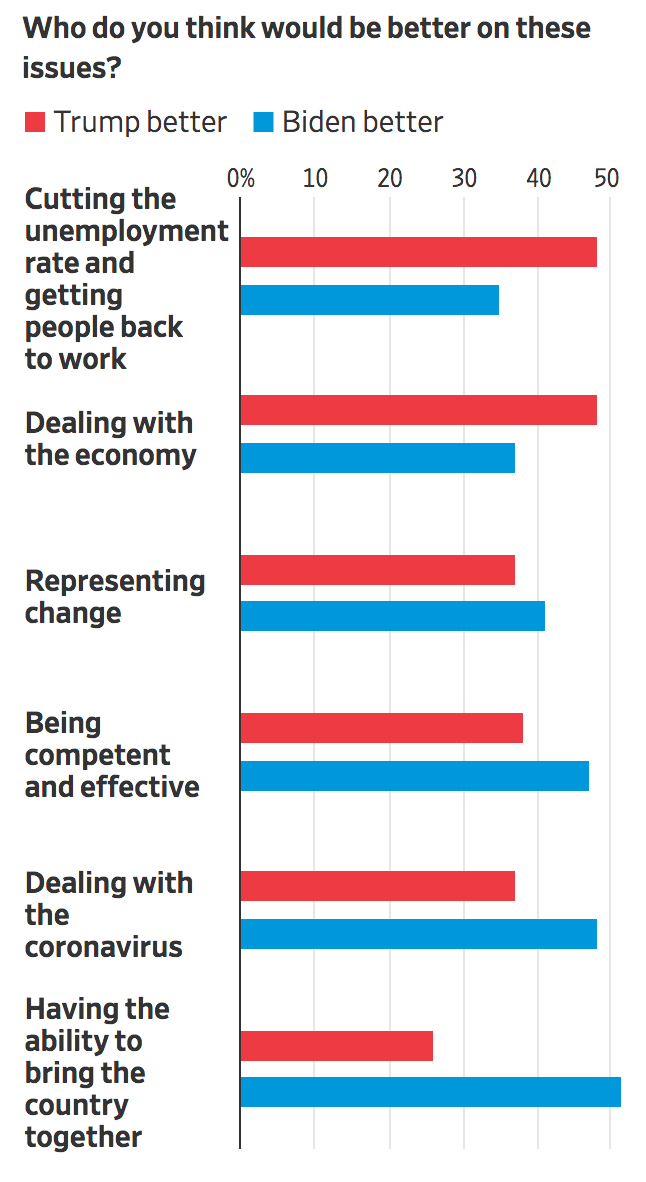 Americans by a 2-to-1 margin are more troubled by the actions of police in the killing of George Floyd than by violence at some protests, and an overwhelming majority, 80%, feel that the country is spiraling out of control, according to a new Wall Street Journal/NBC News poll.

The poll also reveals striking partisan divides in how Americans view a pair of unfolding national crises, including the unrest sparked by the killing of Mr. Floyd, the black Minneapolis man who was in police custody, and the coronavirus pandemic, responsible for more than 109,000 fatalities in the U.S.

Nearly three-quarters of Democrats, 74%, said it may take the next year or even longer to curb Covid-19 and return to work as normal. By contrast, among President Trump’s strongest supporters within the Republican Party, 32% said the coronavirus is already contained.

About half of all Republicans, 48%, said they were more concerned about the protests than the circumstances of Mr. Floyd’s killing, while 81% of Democrats held the opposite opinion.

Those crises appear to have had little impact on Mr. Trump’s standing. His job approval rating stood at 45%, down 1 percentage point from April, according to the poll. His 7-point deficit against Democratic presidential contender Joe Biden remained unchanged. Mr. Biden had 49% support, with 42% for Mr. Trump.

Mr. Trump’s biggest advantage over Mr. Biden continued to surround economic issues. When asked who would be best at cutting the unemployment rate and getting people back to work, Americans picked Mr. Trump, 48% to 35%. A similar share said Mr. Trump would be better at dealing with the economy. Mr. Trump held a slight advantage, 43% to 40%, on the question of dealing with China.

Since the midterm elections—a period that included the release of the Mueller report, an impeachment, a pandemic and civil-rights upheaval—Mr. Trump’s approval rating has never dipped below 43% and has never risen above 47%, according to 18 polls during that time.

“Those are remarkable findings that speak to the power of our partisan silos,” Mr. McInturff said.

One was the widening Democratic lead on which party the country wants to control Congress after the next election. Americans said they prefer Democrats over Republicans, 51% to 40%, an 11-point divide, up from 6 points in January.

A similar double-digit preference for Democrats prefaced the party’s gains in 2018, 2008 and 2006. If the finding persists, that signals it would be more difficult for Mr. Trump to close the gap with Mr. Biden, Mr. McInturff said.

Views of Mr. Trump’s handling of the contagion continued to worsen, according to the poll, while fewer Americans said they hold a negative view of Mr. Biden, despite a recent ad blitz from the Trump campaign that aimed to have the opposite effect.

Since the last week of April, the president’s re-election campaign has spent more than $13 million on TV and radio ads across eight battleground states and the District of Columbia, attacking Mr. Biden as soft on China while defending the president’s response to the pandemic, according to data from political ad tracker Kantar/CMAG. Over the same time, America First Action, a super PAC supporting Mr. Trump, spent about $5 million on ads with similar messages.

Mr. Biden was viewed negatively by 38% of voters in the poll, down from 41% last month.

Americans said they believed Mr. Biden would be better able than Mr. Trump to end political gridlock in Washington and behave competently and effectively in the job. They also viewed the Democrat as better at handling coronavirus, dealing with health-care issues and addressing the concerns of minorities.

Mr. Biden’s biggest advantage over Mr. Trump, 51% to 26%, was on which candidate could bring the country together. That 25-point gap compared with a 14-point advantage on the same question for 2016 Democratic nominee Hillary Clinton.

The political effect of a large majority of Americans saying the country was out of control was unclear, pollsters said. “Out of control—that’s America in 2020,” Mr. Horwitt said. He said it is “one of the few things Americans can agree upon, and the one finding that we can definitively state, given the tumult and torment.” 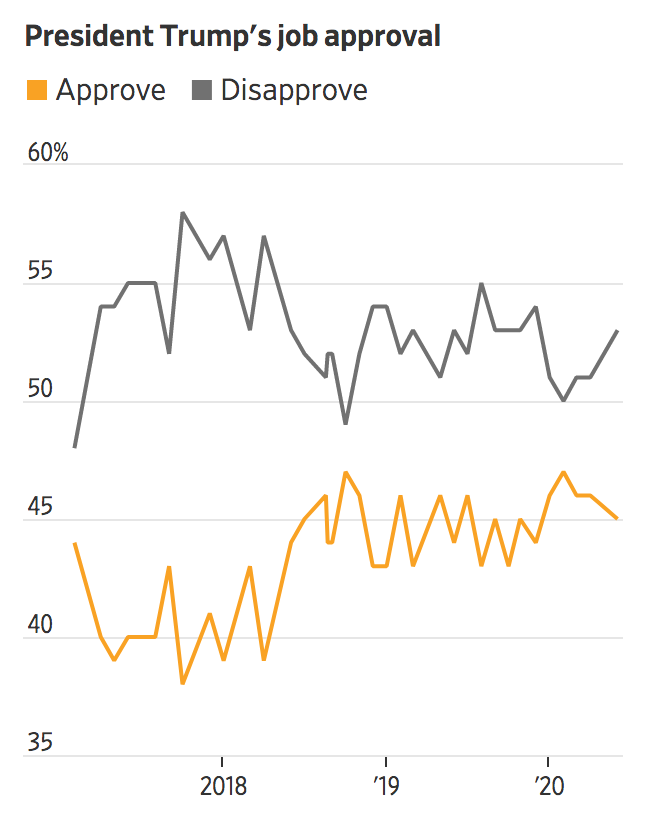 On coronavirus, nearly two-thirds, 63%, said they were concerned that they or someone in their family would catch the virus, down from 73% in April.

More Americans, 51%, said Mr. Trump was too focused on the economy and not on keeping people safe, while 42% said he was striking the right balance.

Roughly two-thirds of Americans said they always wear a mask when they leave the house, compared with 21% who sometimes wear one and 15% who said they rarely or never do.

Those who always wear a mask, as recommended by the federal government, said they supported Mr. Biden over Mr. Trump in November, 66% to 26%. Those who never or rarely wear masks backed Mr. Trump, 83% to 7%. 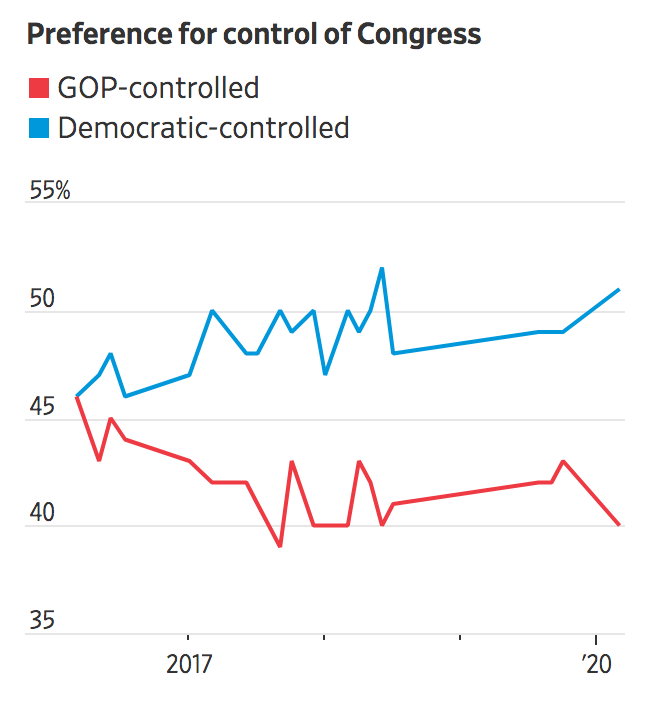 The Journal/NBC News poll surveyed 1,000 registered voters from May 28 through June 2. The margin of error was plus or minus 3.1 percentage points.

Stock Market ‘Not A Reflection Of The Strength Of The Economy,’ Says NYSE Pres. (#GotBitcoin?)