I’ve seen these cycles before and this one is going to leave a scar.

People, make (if you haven’t by now) preparations for a long, drawn-out down-turn. 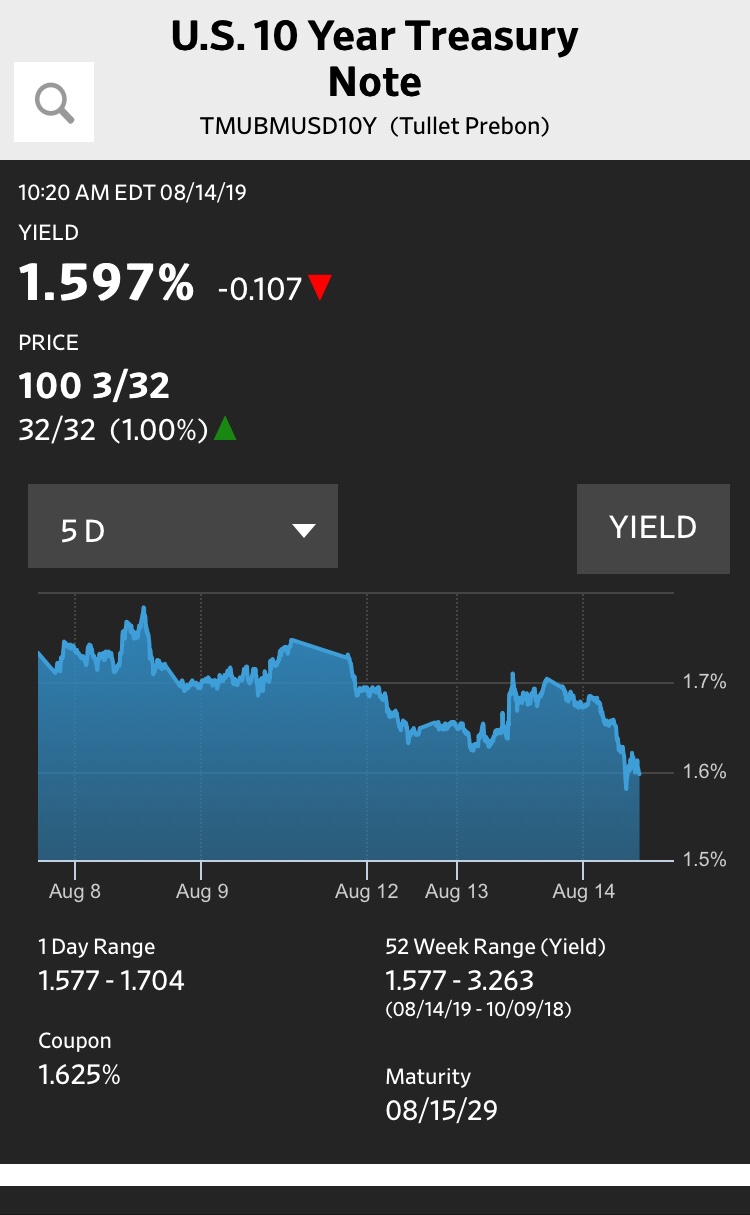 The Dow Jones Industrial Average dropped 435 points, or 1.7%, shortly after the opening bell, while the yield on the U.S. 30-year Treasury note fell to a record low.

The drops erased the optimism sparked a day earlier when the Trump administration abruptly suspended plans to impose new tariffs on goods from China and suggest the volatile swings that have defined trading in August are showing no signs of easing.

Trade tensions between the U.S. and China, uncertainty about the Federal Reserve’s interest-rate policy and signs of slowing economic growth have spurred weeks of turbulence that have rippled through the stock, bond and currency markets.

Meanwhile, yields on the 10-year Treasury note fell below two-year yields for the first time since 2007.

This kind of inversion between short and long-term yields is viewed by many as a strong signal that a recession is likely in the future.

“The bar for an actual recession is very, very high [in the U.S.],” said Geoff Yu, head of U.K. investment office at UBS Wealth Management. “For asset allocators, it’s still a case of hope for the best but prepare for the worst.” 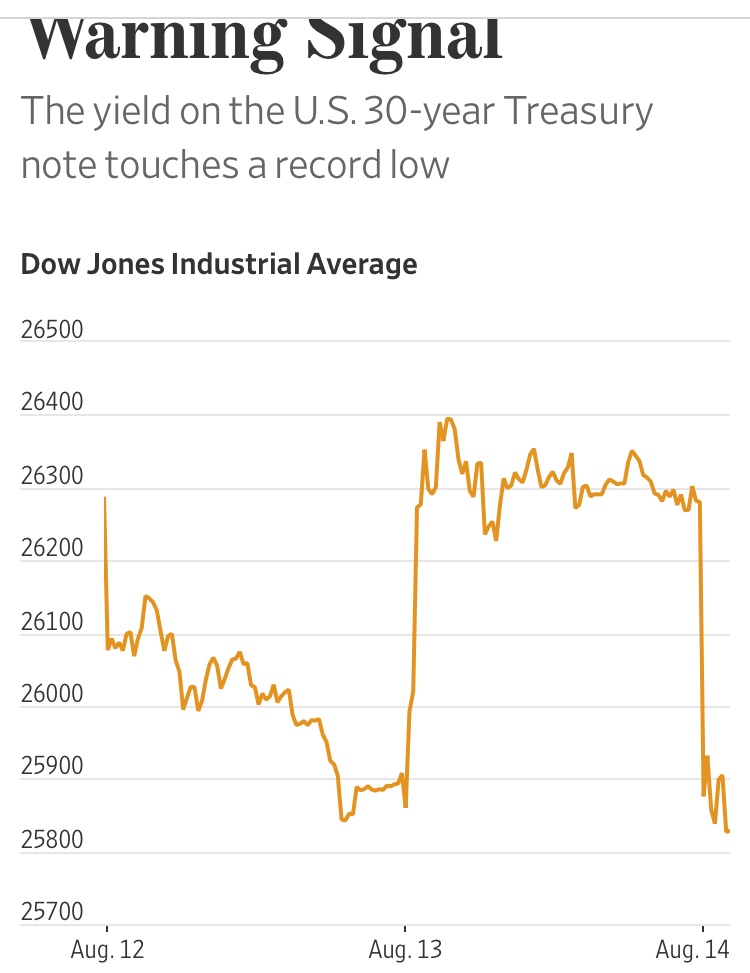 This inversion is particularly concerning given it comes on the heels of the Fed cutting short-term rates last month. Some analysts viewed that cut as an insurance cut of sorts, one that would help prevent this sort of inversion from occurring.

The Federal Reserve’s preferred measure is the difference between 10-year and three-month yields, which have consistently shown this kind of recession risk signal since late May.

Though the yields have fallen precipitously, they remain higher than the debt on most developed countries around the world. Yields are negative in Japan and much of Europe, sending investors to piling into U.S. bonds and sending prices higher and yields lower.

“Investors globally have no where else to go for yield,” said John Brady, managing director at brokerage R.J. O’Brien & Associates. 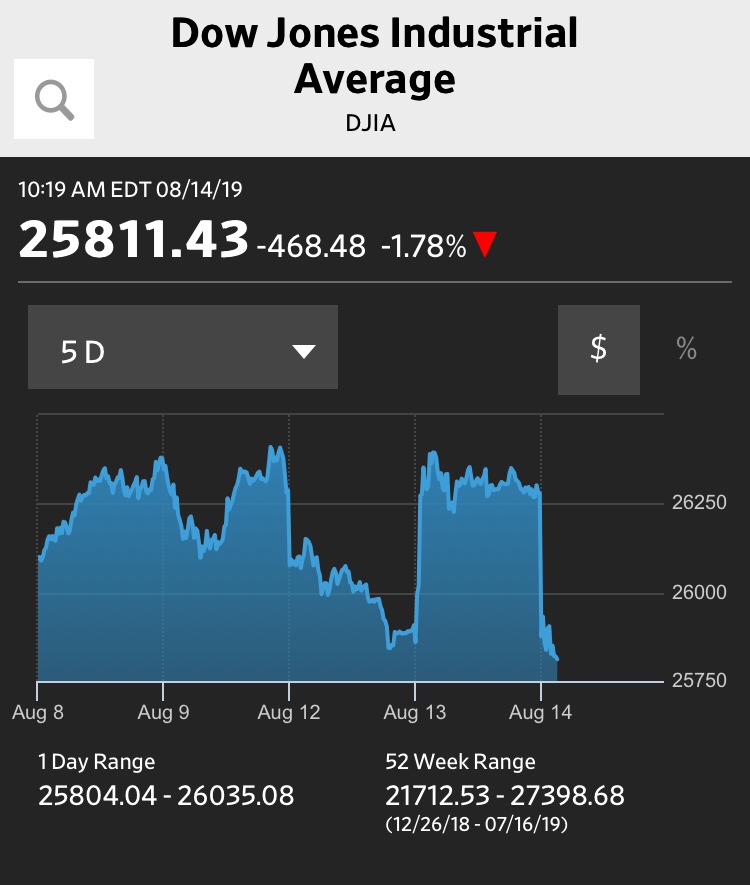 The S&P 500 and Nasdaq Composite declined 1.4% and 1.6%, respectively. The indexes rose by similar percentages Tuesday.

Wednesday’s moves came despite the White House abruptly changing its policy on Chinese tariffs Tuesday, delaying a round of extra charges from September until December.

The delay helped put off concerns that the U.S.-China trade war would have knock-on effects for consumers and domestic demand, although they haven’t gone away completely.

Elsewhere, European stocks fell after data showed the German economy shrank in the second quarter. The Stoxx Europe 600 was down 1.6%, while the German DAX dropped 1.9%.

Germany’s economy contracted by 0.1% in the second quarter due to further declines in exports, and the latest data mean that average quarterly growth has been zero since the third quarter of 2018, according to ING.

The data put pressure on the German government to stimulate the economy through tax cuts or public spending.

“Right now the key question [for Germany] is just how much can the domestic demand offset international contraction,” said Nadia Ghabari, an economist at Pictet Wealth Management.

The yield on the 10-year German bund touched a fresh record low of minus 0.645%, according to Tradeweb. Bond yields and prices move in opposite directions.

The debilitating effect of trade tensions also was visible in Chinese data, as value-added industrial production in the country grew 4.8% in July, significantly lower than the 6.3% increase in June and below expectations of 5.9% growth.

Still, Asian stocks rallied on the tariff delay, with shares in Shanghai up 0.4% and Japan’s Nikkei up 1%. Hong Kong’s Hang Seng was up nearly 0.1% as the city continued to struggle with protests and violence.