One of the great conundrums of the American political scene is why the poorer states, colloquially known as “red” states, tend to vote Republican or conservative, while the richer states, the “blue” ones (and let it be said that this is very confusing for this European, for over here the colours tend to work the other way around, red is Labour, or left wing) tend to vote Democrat. Why Poor States Are Red And Rich States Are Blue (#GotBitcoin?)

We would think that it should be the other way around, the poor people voting for more from that Great Big Pinata which is government. But it seems that there’s a simple solution to this: the red states aren’t actually poorer in terms of the way people live.

Blue states, like California, New York and Illinois, whose economies turn on finance, trade and knowledge, are generally richer than red states. But red states, like Texas, Georgia and Utah, have done a better job over all of offering a higher standard of living relative to housing costs. That basic economic fact not only helps explain why the nation’s electoral map got so much redder in the November midterm elections, but also why America’s prosperity is in jeopardy.

Red state economies based on energy extraction, agriculture and suburban sprawl may have lower wages, higher poverty rates and lower levels of education on average than those of blue states — but their residents also benefit from much lower costs of living.

For a middle-class person , the American dream of a big house with a backyard and a couple of cars is much more achievable in low-tax Arizona than in deep-blue Massachusetts. As Jed Kolko, chief economist of Trulia, recently noted, housing costs almost twice as much in deep-blue markets ($227 per square foot) than in red markets ($119).

That particular piece then goes on to chunter away about how appalling it is that people aren’t willing to vote for more blue state type of policies and how this will be the end of America. However, the really interesting part of it is that part quoted above. For it speaks to something that economists just keep trying to point out to people. Yes, sure, income inequality might be important in a way, wealth inequality should have a place in our thoughts. But what really matters to people about how life is lived is consumption. Levels of consumption and also consumption inequality.

That last is important in a political sense currently because consumption inequality just hasn’t widened out as much as income and wealth inequality have. And levels of consumption: well, that’s really what income or wealth is, the ability to purchase consumption. And if you’re in a place where prices are lower, leading to greater consumption (whether of food, or square feet of housing, or leisure, or whatever), well, then you’re richer, aren’t you?

And thus is our conundrum solved. The red states aren’t in fact poorer than the blue states. They’re richer: that’s why they vote more conservative and more right wing.

We Could, Of Course, Take Yet Another Point From This Essay:

For blue state urbanites who toil in low-paying retail, food preparation and service jobs, for the journeyman tradespeople who once formed the heart of the middle class, for teachers, civil servants, students and young families, the American dream of homeownership — or even an affordable rental apartment — is increasingly out of reach. Adding insult to injury, rapid gentrification in these larger knowledge hubs brings the constant threat of displacement of creative workers. For even the much better paid techies, engineers, financiers and managers who are displacing them, the metropolitan version of the American dream is a cramped condo or a small house and a long commute. Many are opting to move to cheaper red states instead, further driving their growth.

That rather shows that the way that the blue states are run isn’t conducive to good living standards for the poorer half of the population, doesn’t it? Or, as we might put it, blue, liberal, policies don’t actually do what they say on the tin, aren’t in fact pro-poor. All of which is something that ties in nicely with something we noted from Joe Stiglitz yesterday. Restrictive zoning is very much more common in those blue states than it is in the red. And housing is still a family’s largest single expense. Meaning that by artificially pushing up the cost of housing those blue states are indeed making life worse for the poor. The adoption of build anything anywhere (almost, we’re not quite ready for a steel plant in Manhattan) policies would thus improve the lives and fortunes of the poor substantially.

But that is to become perilously close to snark about all of this. That basic and first observation still stands though. That puzzle of why people in places with lower incomes tend to vote right wing is solved. Because those lower income places have even lower prices, making consumption standards higher. There is therefore no conundrum. The richer people, by the only standard that actually matters, that consumption, are voting right wing, the poorer are voting left.

What we now need to go on and explain is why those nominally left policies, those blue ones, are so to the disadvantage of the poor they’re supposedly helping….

Blue states were better than red states in 2018.

That’s what my trusty spreadsheet tells me when I compiled a selection of state-by-state rankings that serve our national thirst to debate who’s No. 1 and who’s dead last.

My study used 14 state-by-state rankings published last year on various quality-of-life subjects. My “red” states were those who voted for President Donald Trump in the 2016 election; “blue” states were the ones that didn’t go for Trump.

The top five were New Hampshire, Utah, Washington, Colorado and Minnesota. All but Utah voted “blue” in 2016. The bottom five were Louisiana, Mississippi, West Virginia, Kentucky and Arkansas — all red states.

Now you could argue the relatively poor scores of red states helps explain Trump’s election — voters frustrated with the state of their states chose a political novice to stir up the status quo.

Of course, one could also wonder if two years after Trump’s election such disappointing “red” grades help explain why Democrats fared well in the recent mid-term elections.

I will note that topic by topic, a state’s individual rankings often varied a lot. That suggests many states — and I don’t just mean government — are really good at some stuff and fairly bad at other stuff.

When I applied standard deviation math to the 14 ranking results I found that red state rankings were decidedly more predictable than blue state results.

This geeky volatility measurement found that rankings were most consistent for Pennsylvania, Wisconsin, Montana, Nebraska and Louisiana. This is a decidedly a middle-America “red” grouping.

The most wildly gyrating rankings were found in Hawaii, Vermont, Alaska, Nevada, Connecticut and California. It’s what I’d call a quasi-coastal and decidedly “blue” crowd.

Here’s What States Stood Out, And Who Stunk, In The 14 Rankings I Tracked …

Being A Patient: United Health Foundation’s yardstick found the top spots to be sick — and get quality care — were Hawaii, Massachusetts and Connecticut. Worst? Louisiana, Mississippi and Alabama.

Personal Freedom: The Cato Institute’s yardstick for laws friendly to the populace showed the best were in Maine, Nevada and New Mexico. Worst? Texas, Alabama and Hawaii.

New Neighbors: Census data as of July showed the fastest population growth on a percentage basis was in Nevada, Idaho and Utah. Least Attractive? West Virginia, Illinois and Alaska.

Cost of Living: Missouri’s tracking of how expensive life is in each state shows low-cost leaders Mississippi, Oklahoma or Arkansas. Priciest? Hawaii, California then New York.

Transportation: Best places to get around, by Bankrate’s yardstick, were North Dakota, Iowa and Ohio. Worst? California, Hawaii and Connecticut. 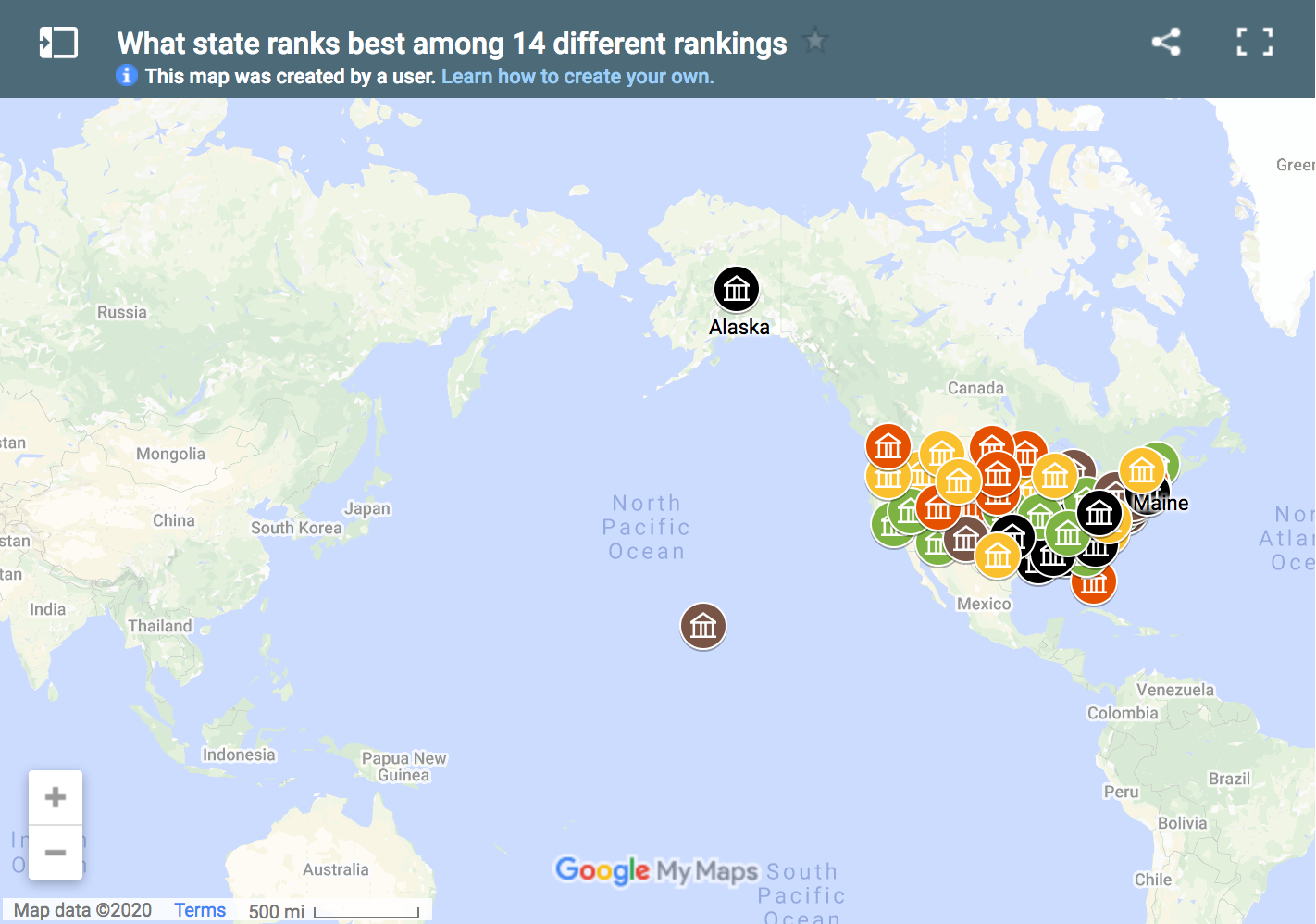 In This Map, Click On Icons For Individual State Data …