Stock Market ‘Not A Reflection Of The Strength Of The Economy,’ Says NYSE Pres. (#GotBitcoin?) 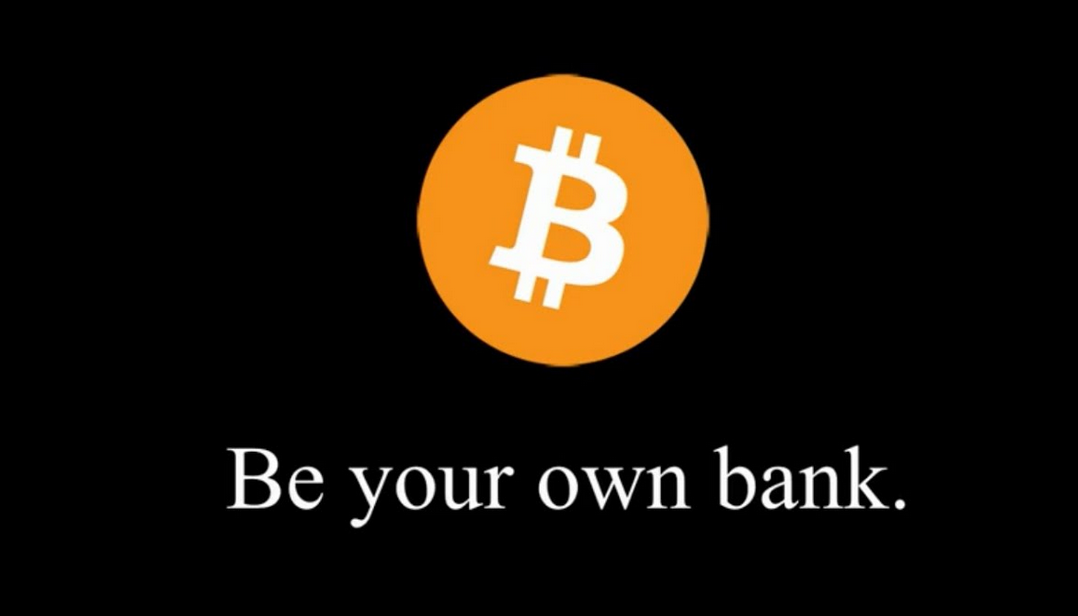 By-the-way, while the jobless rate for white Americans is down, African American workers continue to lag behind (surprise!).

Meanwhile, most retail investors have long since liquidated their stock holdings and even tapped all lines of credit cards including their HELOCs (home equity lines of credit).

The unemployment rate in the U.S. improved last month as millions of people returned to the workforce.

But the official 13.3% unemployment rate, while still high relative to any point since the Great Depression in the early 20th century, likely understates the economic damage wrought by the coronavirus pandemic.

The real unemployment rate is likely at least 16%, according to the federal government.

That would mean roughly 1 in 6 people can’t find work.

The Bureau of Labor Statistics, which published its monthly jobs report Friday morning, admitted the official unemployment rate may be low relative to reality due to an error in data collection.

Around 21 million Americans were unemployed as of mid-May, a reduction of 2.1 million people from a month earlier, according to BLS data.

That number includes workers who were furloughed — meaning those who were temporarily laid off — by their companies in recent weeks.

More than 15 million workers — about 73% — of the total unemployed are on temporary layoff and expect to be recalled to work once business rebounds.

The BLS determines how many people are unemployed based on a household survey. Survey interviewers misclassified several furloughed workers as being “absent from work due to ‘other reasons,’” according to the BLS.

That’s the same category of workers who’d be on vacation, for example.

The overall unemployment rate would have been “about 3 percentage points higher than reported” if those individuals had been identified correctly, according to the agency. (The estimate isn’t seasonally adjusted.)

That would put the official unemployment rate at 16.3%.

The true rate could be higher still.

In fact, the unemployment rate is a much-higher 21.2% as judged by another metric.

The U-6 metric doesn’t include the workers misclassified by the agency.

Of course, furloughed workers could be recalled back to work quickly, depending on the speed of the economic rebound as states begin to reopen certain business sectors. The unemployment rate would likely rebound faster in this eventuality than if the layoffs were permanent.

The same misclassification phenomenon occurred in April, too — the official 14.7% unemployment rate would have been nearly 20% if furloughed workers had been identified correctly, the BLS said.

“BLS and the Census Bureau are investigating why this misclassification error continues to occur and are taking additional steps to address the issue,” the agency said Friday in the jobs report.

“According to usual practice, the data from the household survey are accepted as recorded,” the agency said. “To maintain data integrity, no ad hoc actions are taken to reclassify survey responses.”

The economy is finally brushing up.

In a twist that shocked many of the nation’s top economists, the U.S.’s May jobs report released Friday showed the country added 2.5 million jobs last month, lowering the unemployment rate from 14.7 percent to 13.3 percent. A large chunk of that gain stemmed from the health care industry, which regained 312,000 jobs between April and May. Around 244,000 of those jobs stemmed singularly from dentists’ offices, making that industry responsible for a full tenth of May’s jobs gains. 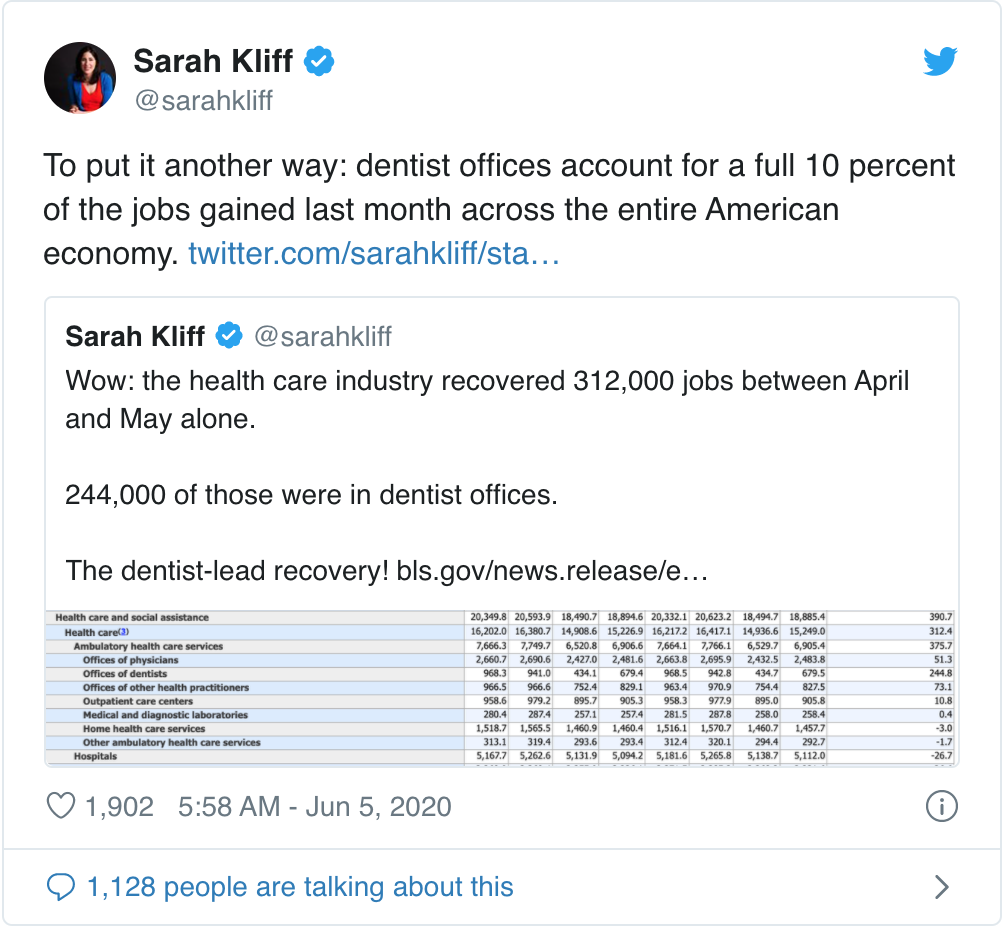 The stock market has rallied in recent weeks while more than 30 million Americans have filed for unemployment, drawing attention to a disconnect between the stock market and the real economy.

In a newly released interview, New York Stock Exchange President Stacey Cunningham acknowledged that the resilient stock market does not reflect the condition of the economy, since relatively robust sectors like health care and tech (some of the same sectors receiving large stimulus injections) make up a large portion of major indexes like the S&P 500 (^GSPC).

When even the president of the NYSE tells you what’s really happening you should probably pay attention.

The Stock Market Is Ignoring The Economy

Feel free to thank Jerome Powell for pumping up stocks and pretty much ALL assets classes with freshly-printed monopoly money: Fed Injects Tens Of Trillions Into Markets As Liquidity Dries-Up

The Unemployment Report Is Painting A Picture Of A Divided America

It was announced Friday that the unemployment rate among white Americans dropped almost 2%. The report shows that rate increased in the African American community though – from 16.7% up to 16.8%.

“It went from 3.2 million roughly in April to 3.3 million and change in May,” says Cornell School of Industrial Relations economic geographer Russell Weaver. “So even though you’re looking at one decimal – you’re still talking about 100,000 more people.”

The jobless rate overall fell from 14.7% a month earlier, which was the highest on records dating from 1948.

According to numbers provided by the Trump administration. In April, 20.7 million jobs were lost, the largest drop going back to 1939. While the overall grim picture improved slightly, there are still major caveats: a stunning 21 million Americans remain unemployed, with a jobless rate higher than at any time since 1940. And the return to work is uneven, with unemployment jumping among African Americans to 16.8%, the highest it’s been since 1984

Trumponomics Combined With Mishandling of Coronavirus Devastates Black America: ‘This Is Bigger Than Katrina’

Economists warn the deaths could be just the start of further setbacks for already vulnerable Black residents.

Remainder of The Article

This Is Not A Position Of Strength!!!!

The Congressional Budget Office, in a Thursday letter to members of Congress, said it estimated expanding enhanced jobless benefits through January 2021 would mean five in every six claimants would make more money from unemployment insurance than from work. The program pays workers an extra $600 a week and is currently set to expire in July. Lawmakers are debating whether to extend it as part of a new stimulus bill.

Research confirms that the typical worker on unemployment is earning more on unemployment than he or she had been at work, due to enhanced benefits and stimulus money provided by Congress, said Becky Frankiewicz, president of ManpowerGroup North America, a job-placement company. Again, a strong economy will make sure that you make enough money so that you don’t have to worry about the difference in either staying at home an collecting unemployment money or even relying on stimulus checks. At least that’s the way it used to be when I was working for others.

New numbers from the U.S. Labor Department Friday surprised economists when the jobless rate dropped from 14.7 percent in April to 13.3 percent in May. But there was a note on the official report called a “misclassification error” that makes last month’s unemployment rate up to three points higher. The Wall Street Journal’s chief economics commentator Greg Ip joins Hari Sreenivasan to explain.

“New numbers from the Labor department yesterday surprised economists when the jobless rate dropped from 14.7% in April to 13.3% in May.

Stocks rose and President Trump called reporters to the Rose Garden to announce the unexpected good news even though tens of millions of Americans are still out of work.

But there was a note on the official report—pointing out a “misclassification error” — an error that makes last month’s unemployment rate as much as three points higher.

The Wall Street Journal’s Chief Economics Commentator Greg Ip explained what was wrong with the numbers.”

“So the numbers are a little bit distorted because of the unusual circumstances of the pandemic.

People who are on temporary layoff are supposed to be classified as unemployed. For reasons that we’re not really sure a lot of those people were, in fact, classified as employed.

Now, the Bureau of Labor Statistics is aware of that problem. They told us that if you adjust for that error, then the unemployment rate is actually higher.

“When we talk about numbers like 13 or 16 percent, compare that to where we were just six months ago.

I know around, you know, January, February, we were down in the three percent area. Now we’re dealing with unemployment rates that are the highest since the Great Depression.

I have to emphasize, we do not have good models for understanding where the economy is going at a time like this. It’s just too soon to say how long we’ll be dealing with this historic level of unemployment.”

Trumponomics Is Grand Ain’t It?

Share this with all those idiots who think we had a “strong” economy prior to corona-bologna!