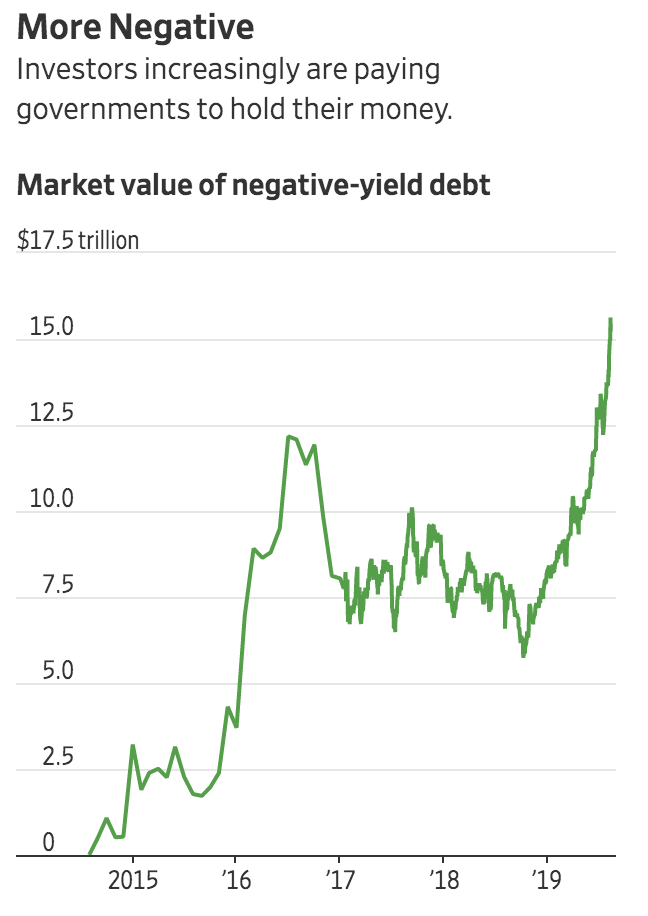 A steep slide in U.S. government-bond yields last week wrong-footed investors and left some pondering what was once unthinkable: whether interest rates in America could one day turn negative.

Historically, people who lent money out got more money back later, a way to compensate for inflation, for the risk of not being repaid and for forgoing other investments.

Now, though, there is more than $15 trillion in government debt around the world with negative yields. That means, essentially, that savers holding these bonds are paying the government to store their money.

So far, the U.S. has avoided that fate. Less than a year ago, the Federal Reserve was hiking short-term interest rates, and investors were betting that yields—which rise when bond prices fall—on longer-term debt would continue climbing as U.S. growth showed signs of accelerating and as unemployment plumbed historic lows.

The trade dispute between the U.S. and China, slowing global growth and financial-market turmoil late last year changed that. The Fed pivoted in the beginning of 2019 and, late last month, cut short-term rates for the first time since 2008.

Last week, the added fear of a currency war sent yields tumbling. That sparked new discussion about larger forces that have dragged yields below zero elsewhere and to which the U.S. may not be immune. Those include lackluster economic growth since the financial crisis and persistent soft inflation that has puzzled many economists.

“If you proposed negative rates 10 years ago, people would have laughed you out of the room,” said Mark MacQueen, a bond manager and principal at Sage Advisory Services. “Today people are getting on board the negative-rate idea very quickly.”

Yields have been this low during a few other periods in the past decade. But many investors are unsure what could revive them this time absent a change in government policy or unexpected improvement in the economic outlook.

The yield on the benchmark 10-year Treasury note, which settled Friday at 1.731%, is still well above zero—and above its record low of 1.3%. But the 10-year Treasury yield dipped last week, to as low as 1.6%, sending broad ripples throughout markets: Bank shares slid, gold rose to a six-year high and oil fell to an almost seven-month low.

Falling yields are typically taken as an ominous sign for the economy. They usually represent a flight to safety by investors that occurs alongside expectations for subdued growth and inflation, as well as a lowered path of interest rates set by the Fed.

Not all investors are convinced U.S. yields are destined to fall further, and those that think they could go negative remain in the minority. While the U.S. economy has slowed recently, it has continued to grow faster than either the eurozone or Japan. Some also think growth will eventually lead to higher inflation, particularly if the Fed injects extra life into the economy.

“We’re a bit perplexed about the level of yields,” said Andre Severino, head of global fixed income at Nikko Asset Management. “It’s kind of like Armageddon is being priced in.”

Still, a continued decline in yields could have major consequences for U.S. investors and society more broadly. In Europe and Japan, subzero yields were brought about by slow growth, low inflation and aggressive central-bank stimulus, including negative interest rates and extensive asset purchases. That has helped alleviate economic pain.

But the subzero yields haven’t led to a true revival in those economies. They have also hurt savers and threatened the financial system by curtailing the ability of banks to generate profits.

Low yields present “not necessarily an awful picture, but not a great picture,” said Andres Sanchez Balcazar, head of global and regional bonds at Pictet Asset Management. Ultimately, they “create a lot of pressure on society” when savers faced with lackluster investment returns discover “their retirements are not going to be what they expected them to be.”

Based in Geneva, Mr. Balcazar has been a buyer of negative-yielding bonds. He said they make sense so long as their yields are less negative than rates offered by central banks. Though skeptical that yields in the U.S. will actually fall below zero, he said they could get closer if the economy worsens and the Fed revives its postcrisis bond-buying program.

Investors, analysts and economists have come up with a variety of explanations for why economic growth has been so sluggish in the developed world over the past decade. Those include the historic levels of debt held by governments and businesses, which some argue has curtailed investment. 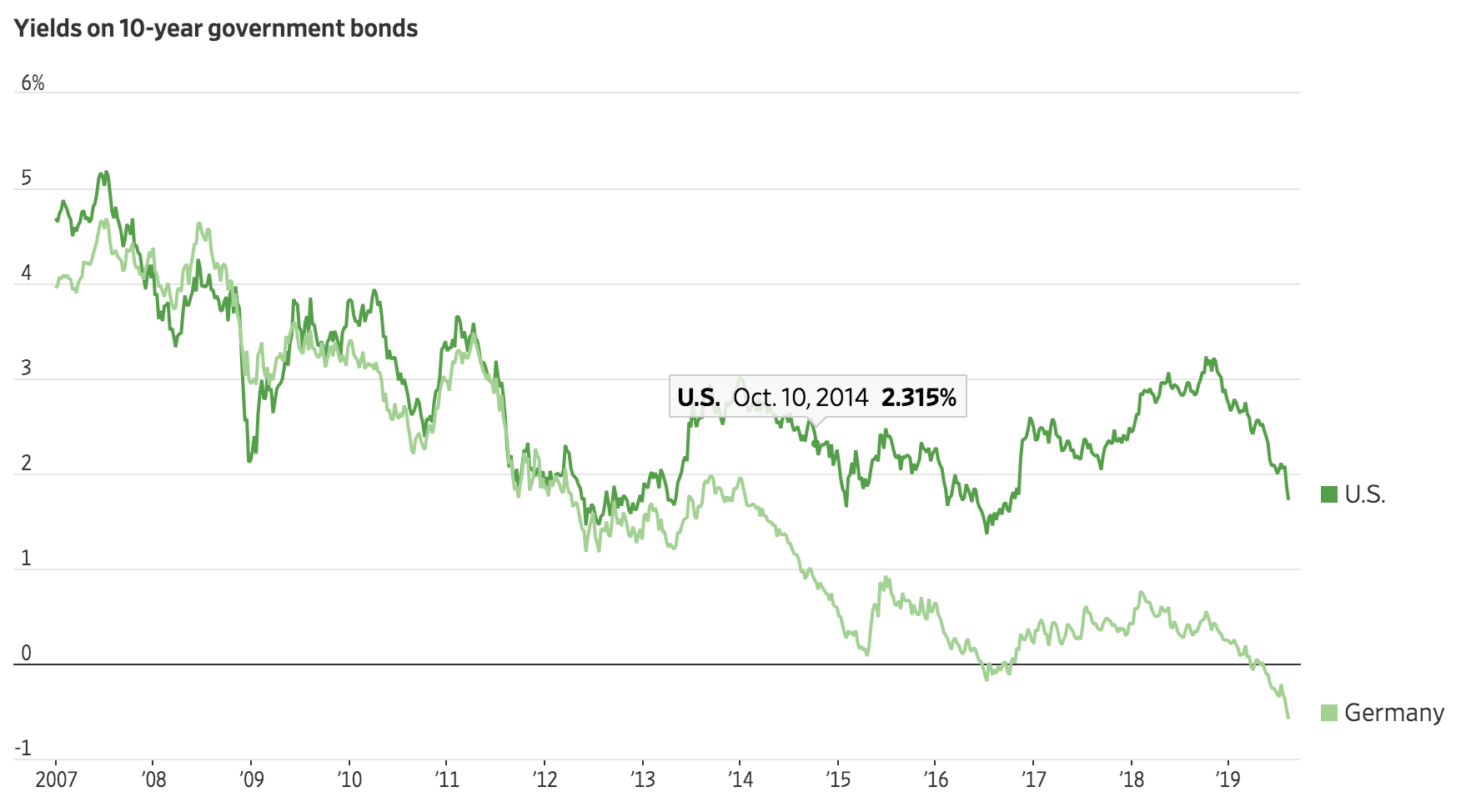 Some economists argue an aging population can also hinder economic productivity. That is because the workforce shrinks, and workers who have spent careers accumulating skills retire and are replaced by younger people with less expertise.

There are also explanations for why inflation has failed to take off even after a decade of growth. These include technological developments and global supply chains that have held down the cost of producing goods.

Some investors now believe U.S. yields could fall more quickly than previously expected. In recent weeks, there have been signs that central banks around the world are racing to cut interest rates in an effort to stay ahead of the Fed and support their economies by weakening their currencies.

Such actions could end up pushing the Fed to cut rates faster. That would give the central bank less room to reduce rates if the U.S. entered a recession. That, in turn, could give it more reason to consider measures such as long-term bond purchases, or even negative rates, as alternative forms of stimulus.

One measure of how far Treasury yields have fallen: On Friday, the yield on the 10-year Treasury inflation-protected security was yielding around 0.06%, according to Tradeweb. This shows that, once adjusted for inflation, the conventional 10-year Treasury note is already yielding close to zero.

From currency fluctuations to deflation, there are scenarios in which purchasers of negative-yield bonds can come out ahead.

Why would anyone want to buy a bond with a negative yield?

It’s a good question especially given that experts estimate that there are almost $16 trillion of bonds in the world that have negative yields. That’s a lot of securities that investors have purchased knowing that they’ll get back less money than they invested. It means that a one-year bond with a face value of $1,000 that yields minus 1% will leave the investor with $990 when the bond matures.

Making such an investment might seem silly. But there are at least five situations where it may make sense.

1. The Bond Offers Security At A Cost

Negative-yielding bonds that have a minuscule risk of default can be attractive to some investors. “Think of the negative yield as the cost of storage,” says Sam Stovall, chief investment strategist at New York financial research firm CFRA. “Would you rather pay nothing for questionable security, or would you rather pay a little bit more to ensure your principal is safe?” For instance, the “cost of storage” when investing in a 10-year German bund, which has a solid AAA credit rating, would be 0.5% a year based on recent yields. Yes, there’s a cost, but you have a near guarantee that you will get almost all your money back when the security matures.

Holding cash in a deposit account with zero or ultralow interest might not be an available alternative to investors when bond yields turn negative. Some banks already are charging savings-deposit customers a negative yield. Britain’s Starling Bank became the first U.K.-based bank to charge customers a negative interest rate: The digital bank charges 0.5% on euro deposits of €50,000 or more, equivalent to about $58,500 or more.

2. The Chance Of A Quick Trading Profit

Traders would be willing to buy a negative-yielding bond if they thought that the yield might dive deeper into negative territory. Fixed-income prices and yields move inversely, so if a bond yield gets even more negative, the bond price would rally, allowing the trader to make a profit.

3. When Expected Currency Moves Will Likely Offset The Negative Yields

People who invest internationally also have to contend with future changes in the value of a currency, or more specifically, the expected movement in the currency’s value. For instance, the 10-year U.S. Treasury note currently yields around 0.7%, which is better than the minus 0.5% for the 10-year German bund. However, anyone buying the bund six months ago would have made money from the rally in the euro that more than offset the difference in the yields. On March 30 one euro would fetch $1.10 versus $1.17 recently. The 6% currency rally more than compensated for the 1.2 percentage point difference in yields.

If that trend continues, then it should be clear that the bund would make a more attractive investment than the U.S. Treasury. However, there are risks in investing this way because forecasting future currency movements is notoriously tricky.

“You’d be putting an awful lot of weight on something that hasn’t had a long history,” says David Ranson, director of research at financial-analytics firm HCWE & Co.

4. When The Bond Is Still Safe, Relatively Speaking

During the 2008-09 financial crisis, investors often described the U.S. as the least dirty shirt in the laundry basket, meaning that while the U.S. wasn’t in great shape, other countries were in worse condition. In terms of investing in negatively yielding debt, we can use a similar idea. If bonds of similar quality have different yields, then investors would pick the ones with the least negative yield. Such opportunities are rare because investors quickly take advantage of such discrepancies to snap up the better yielding securities.

The most important reason investors would willingly choose to invest in negative-yielding bonds is when there is deflation, or a sustained drop in the price level for goods and services. For instance, consider a one-year bond that yields minus 5% but at the same time inflation is expected to be minus 10% over the same period. That means the investor in the bond would have more purchasing power at the end of the year because prices for goods and services would have declined far more than would the value of the investment in the fixed-income security.

“You can have negative interest rates at any level as long as the expected inflation rate justified,” says Mr. Ranson. Put simply, if your purchasing power grows over the investment period, it doesn’t matter how negative the yield is on the bond.