US Treasury Seeks To Borrow A Record $3 Trillion This Quarter. The National Debt Has Grown To $25 Trillion!! (#GotBitcoin?) 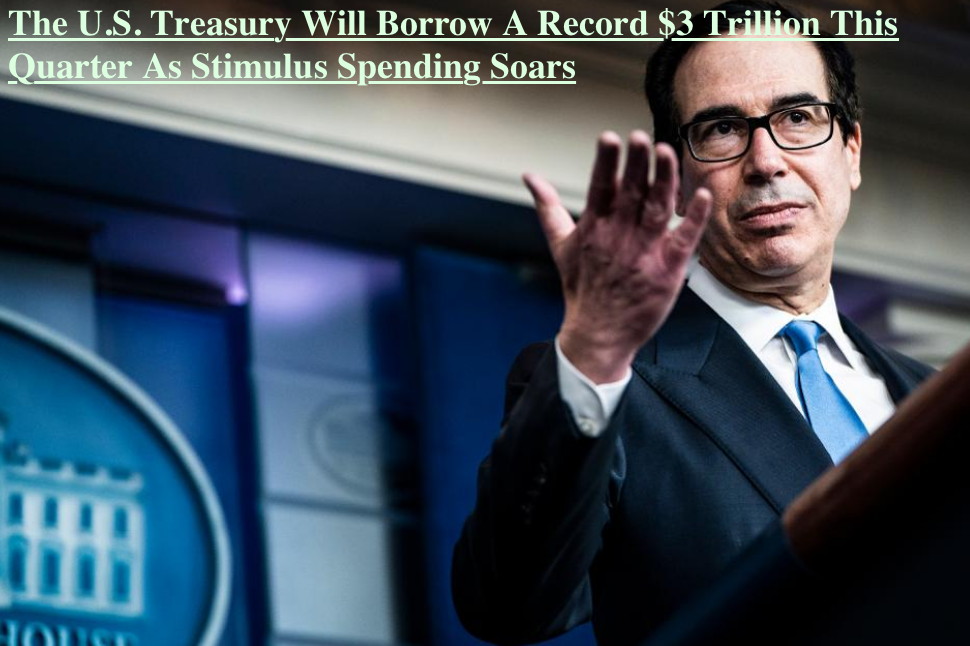 Massive stimulus to support the U.S. economy through the coronavirus crisis will cause the Treasury to borrow a record $3 trillion this quarter.

The department on Monday announced the total, which is actually $2.999 trillion.

“The increase in privately-held net marketable borrowing is primarily driven by the impact of the COVID-19 outbreak, including expenditures from new legislation to assist individuals and businesses, changes to tax receipts including the deferral of individual and business taxes from April – June until July, and an increase in the assumed end-of-June Treasury cash balance,” the department said in a statement.

On top of that borrowing, the Treasury also said it anticipates another $677 billion in the third quarter. First-quarter borrowing totaled $477 billion.

The red ink comes thanks to multiple stimulus efforts Congress has passed to resuscitate an economy brought to a standstill amid social distancing efforts to halt the virus spread. Allocations thus far have totaled more than $2 trillion, and at last one more package is expected to help the more than 30 million Americans who have hit the unemployment line as well as thousands of other businesses that have seen their revenue streams evaporate.

The Treasury Department also is backstopping several lending programs for the Federal Reserve, which is leveraging Treasury guarantees in programs aimed at providing another $2.2 trillion in funding to businesses and households.

Just since March 1, the national debt has grown by $1.5 trillion to $24.9 trillion, a 6.4% increase. The budget deficit through March, or the first six months of the fiscal year, totaled $744 billion, on pace to easily eclipse the biggest shortfall in U.S. history.

Governments May Revisit Postwar Playbook as They Tackle Huge Debts

Financial repression worked after WWII, but it isn’t without costs and risks.

Leaders around the world have compared their efforts to bring the novel coronavirus under control to fighting a war. The similarities may not end when the battle to tame the virus has been won, and the debts accumulated by governments have to be repaid.

In the U.S. and elsewhere, government debt is set to soar this year, reflecting lower tax revenue and the cost of financial aid to businesses and households during lockdowns. The International Monetary Fund forecasts that U.S. government debt will reach 131% of annual economic output this year, up from 109% in 2019.

That is a higher debt burden than after World War II. Other countries are facing similarly high debt levels, including the U.K., France, Italy and Spain.

Some people thinking about how to pay down the debt are looking at an approach used after World War II: financial repression, or policies that ensure that interest rates remain low. They include central-bank purchases of government bonds and regulations prodding investors to hold such securities, said Keith Wade, chief economist at Schroders. Such measures would help hold down bond yields, lowering interest costs over time.

“It is increasingly likely that governments will rely on financial repression to erode their debt-to-income ratios,” he said.

In the years after World War II, the U.S. Federal Reserve and Treasury Department ran a joint operation to support prices of government bonds—which kept interest rates down—while other measures in the U.S. and elsewhere placed limits on interest rates paid by banks, making alternatives to government bonds less attractive to investors.

Similar measures were adopted by the U.K. and other governments, and they worked.

According to a 2015 paper by economists Carmen Reinhart and M. Belen Sbrancia, financial repression lowered the average interest bill of 12 governments by between 1% of gross domestic product and 5% over the years from 1945 to 1980.

The system “played an instrumental role in reducing or liquidating the massive stocks of debt accumulated during World War II,” they wrote.

Some economists see financial repression as a strong option, in part because the main alternatives don’t appear promising.

In theory, an acceleration in economic growth would make it possible to repay the debt quickly. But such a pickup appears unlikely for economies with slowly growing populations and productivity.

Another approach would be to encourage higher inflation, which allows the nominal debts incurred today to be paid down with cheaper money in the future. But developed-economy central banks have tried and failed for most of the past decade to lift inflation to their targets around 2% for a variety of reasons unlikely to go away, such as aging populations, slow economic growth, globalization, advancing technology and low interest rates.

And if central banks succeeded in fueling much higher inflation, they could risk letting it get out of control—which would harm the economy and prove extremely unpopular, as in the 1970s.

The other main option for whittling down the debt is a combination of spending cuts and tax increases, or austerity, which proved politically divisive after the 2009 global recession.

“If the austerity debate continues to be as poisonous as it is now, the way to pay down debt may be through financial repression,” said Ricardo Reis, an economist at the London School of Economics.

However, financial repression isn’t without its costs and risks.

While the costs of austerity would largely fall on lower-income households, the suppression of interest rates would hit savers.

Financial repression also requires a level of coordination between a nation’s monetary and fiscal authorities that most central bankers prefer to avoid for fear of losing their independence from political pressures.

But for much of their history, central banks have played a central role in debt management. Indeed, the Bank of England started off as a vehicle for funding the U.K.’s wars, and only handed over its responsibility for managing government debt to a separate state agency in 1998. Many other European central banks continued to perform that function until the launch of the euro, when they were required to concentrate on fighting inflation.

As Mr. Reis has chronicled, tensions between the Fed and the Treasury over the former’s debt mandate often appeared “worthy of a political drama TV series,” and culminated in the 1951 Treasury-Fed accord, under which supporting the national debt was no longer an objective for monetary policy.

Similar debates in coming years might not have the same outcome.

They also may be postponed for a while. In the heat of the battle, nobody is spending too much time worrying about how those pandemic-related debts will be managed.

“You’re talking to a very fiscally conservative person,” said Ms. Reinhart, the World Bank’s newly appointed chief economist, in response to a question on the wisdom of borrowing so much in response to the pandemic. “But this is a war. In a war, you worry about winning the war, and then you worry about paying for it.”

U.S. Will Borrow Estimated $2 Trillion In Second Half of 2020, Treasury Says

The U.S. expects to borrow an additional $2 trillion in the second half of the year as federal spending ramps up to combat the coronavirus pandemic, the Treasury Department said Monday.

The department estimated the government would borrow $947 billion from July through September, a record for the quarter, bringing total borrowing for fiscal year 2020 to $4.5 trillion, in line with earlier estimates. That total is more than triple last year’s $1.28 trillion, and it dwarfs borrowing during and after the 2008 financial crisis.

The Treasury also estimated net marketable borrowing from October through December would total $1.216 trillion. Senior Treasury officials said their estimate assumes Congress will eventually pass another round of economic relief, driving about $1 trillion in borrowing through the end of calendar year 2020.

The White House and congressional leaders are at a stalemate over the next fiscal aid package, which could include a second round of stimulus payments, an extension of the extra $600 in weekly jobless benefits that expired Friday and additional aid for state and local governments.

Congress has authorized roughly $3.6 trillion in new spending since March to help mitigate the effects of the pandemic, which brought the U.S. economy to a standstill earlier this year, triggering widespread business closures and layoffs. The Trump administration also delayed federal tax payments until July 15 in an effort to keep more cash in Americans’ wallets.

The combination of increased spending and weaker revenues has sent deficits soaring, prompting record borrowing that many Republicans argue is unsustainable.

Many GOP lawmakers have resisted calls for another major economic aid bill, pointing to rising red ink, and have sought to cap additional legislation at $1 trillion. House Democrats in May passed a measure that would cost roughly $3.5 trillion.

“We have to be careful about not piling on enormous amounts of debt for future generations,” Treasury Secretary Steven Mnuchin said Sunday.

The Treasury also said it expects to maintain a cash balance around $800 billion through the end of the year to ensure it has enough money on hand to cover increased government outflows, which have risen sharply since March.

Treasury Expects To Borrow $1.3 Trillion Over Second Half of Fiscal 2021

The U.S. plans to borrow nearly $1.3 trillion over the coming quarters as federal spending picks up following the Covid relief package enacted in March, the Treasury Department said Monday.

The Treasury estimated the government would borrow $463 billion from April through June, compared with the $95 billion it estimated in February before Congress passed the $1.9 trillion relief bill. That is just a fraction of what the government borrowed during the same period last year at the height of the pandemic, when emergency spending and weak tax revenues sent deficits soaring, and drove total borrowing to $2.7 trillion.

Congress approved another burst of federal spending this year that economists expect will drive the economic recovery through the end of 2021, including $1,400 stimulus checks for most Americans, funding for small businesses, aid for state and local governments and enhanced jobless benefits.

The Treasury also estimated net marketable borrowing would total $821 billion from July through September, assuming Congress agrees to suspend the federal borrowing limit after the current suspension expires on Aug. 1.