When President Donald Trump updated the US public on Wednesday about Hurricane Dorian, he used a map that looked identical to one released last week.

A “cone” showing the storm’s probable path had been extended with a felt-tip pen to include part of the state of Alabama, analysts said.

The president has insisted in recent days Alabama was at risk, though forecasters said that was not correct.

What did President Trump say on Wednesday? 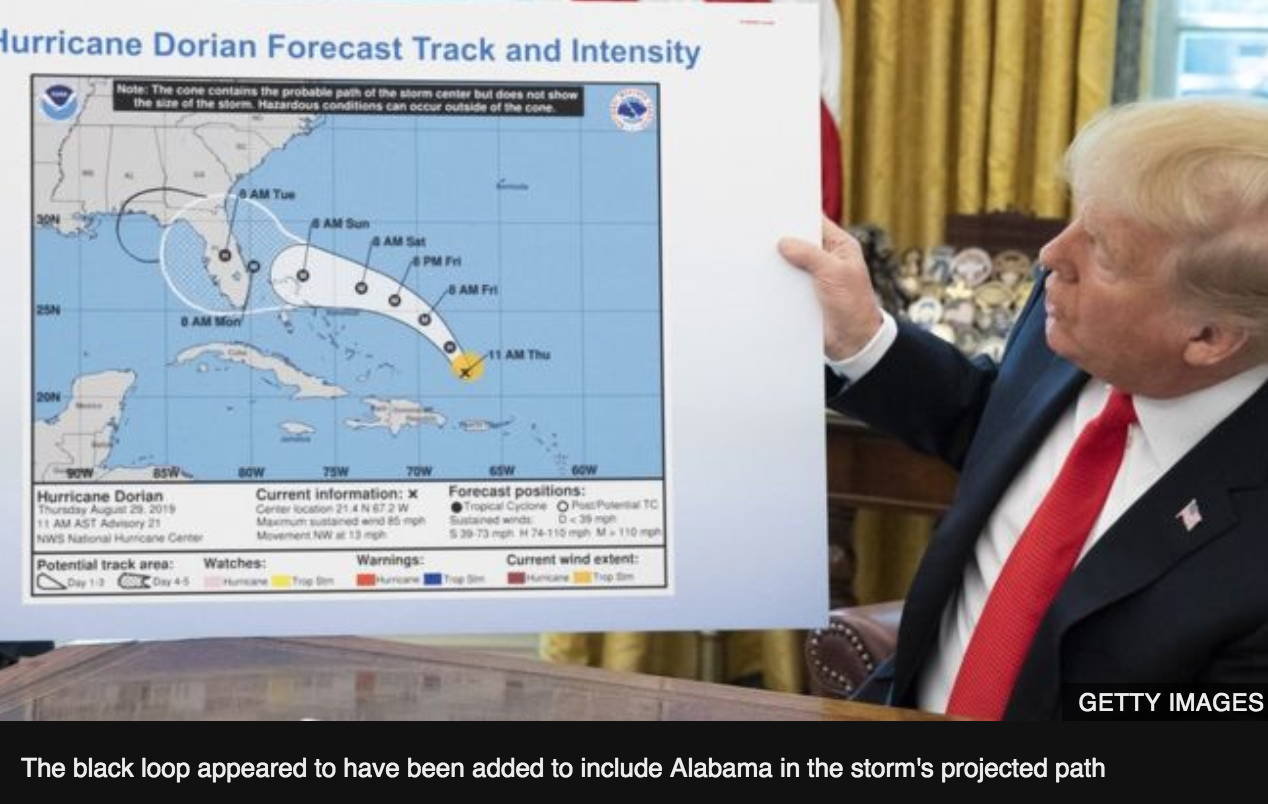 In an Oval Office briefing, Mr Trump pointed to a National Oceanic and Atmospheric Administration’s (NOAA) forecast map from 29 August.

The chart had a black loop marked around Alabama that was not on the original version from last week.

Mr Trump told reporters that Dorian “would have affected a lot of other states”.

Later on Wednesday at a White House event, when asked about the map discrepancy, Mr Trump offered no explanation. “I don’t know,” he said.

“I know Alabama was in the original forecast, they thought it would get a piece of it,” Mr Trump said. 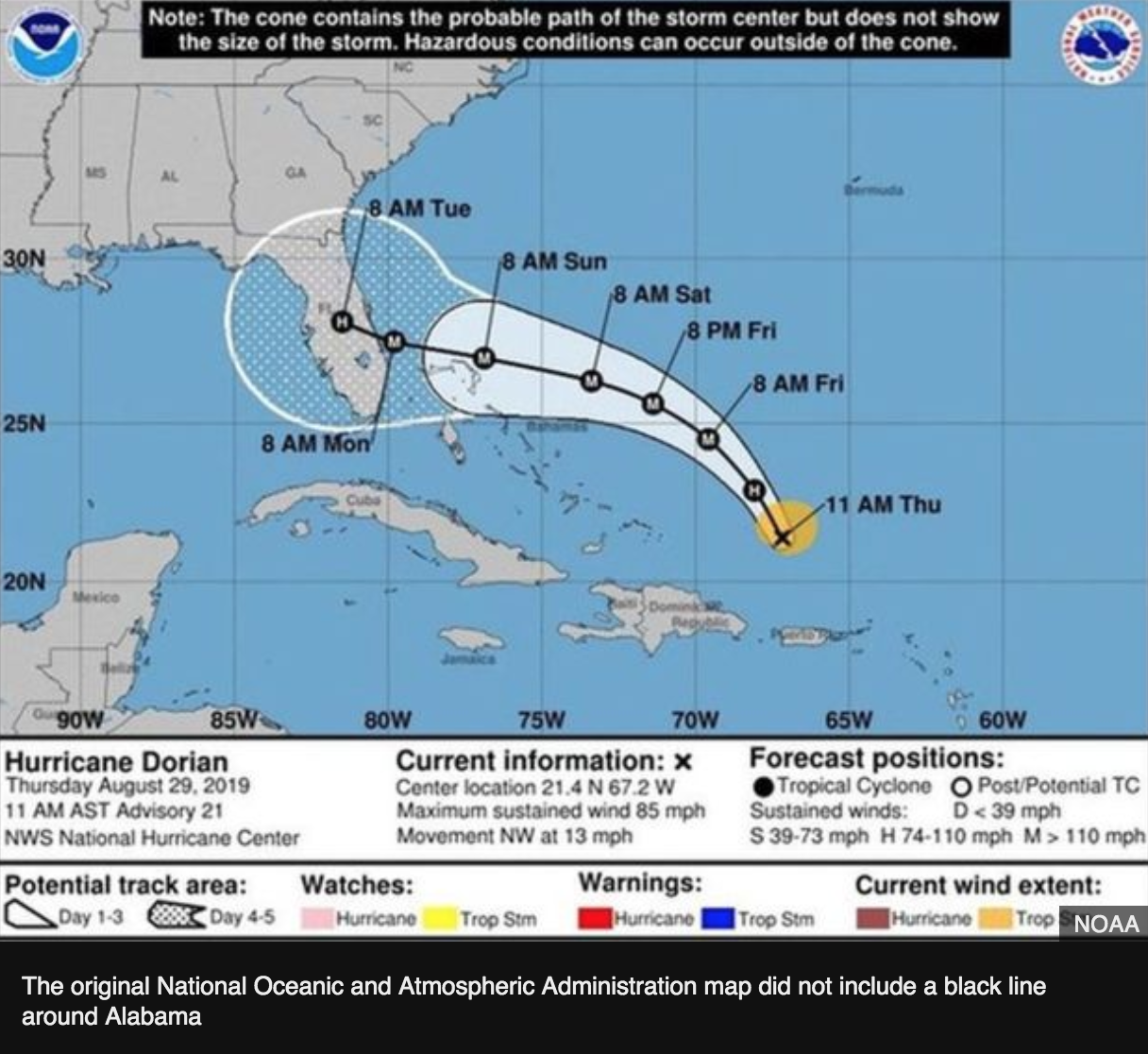 NOAA directed queries to the White House press office, which did not immediately respond.

The hurricane hit the Bahamas with winds equalling the highest-ever recorded at landfall, before moving north late on Tuesday. At least 20 people were killed on the archipelago. 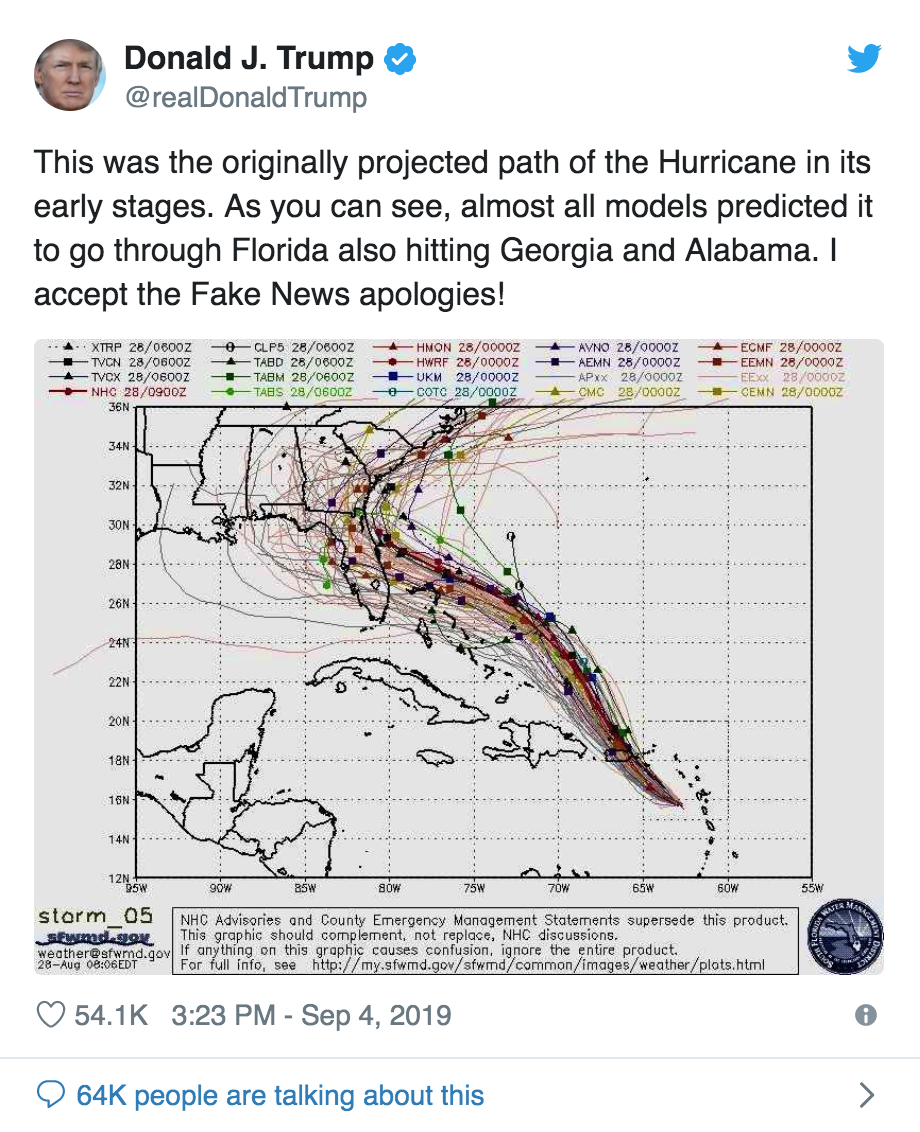 What did the president say in recent days about Alabama?

It began on Sunday morning when Mr Trump tweeted: “In addition to Florida – South Carolina, North Carolina, Georgia, and Alabama, will most likely be hit (much) harder than anticipated.”

But Mr Trump soon afterwards on Sunday told reporters at the White House: “Alabama is going to get a piece of it, it looks like.” 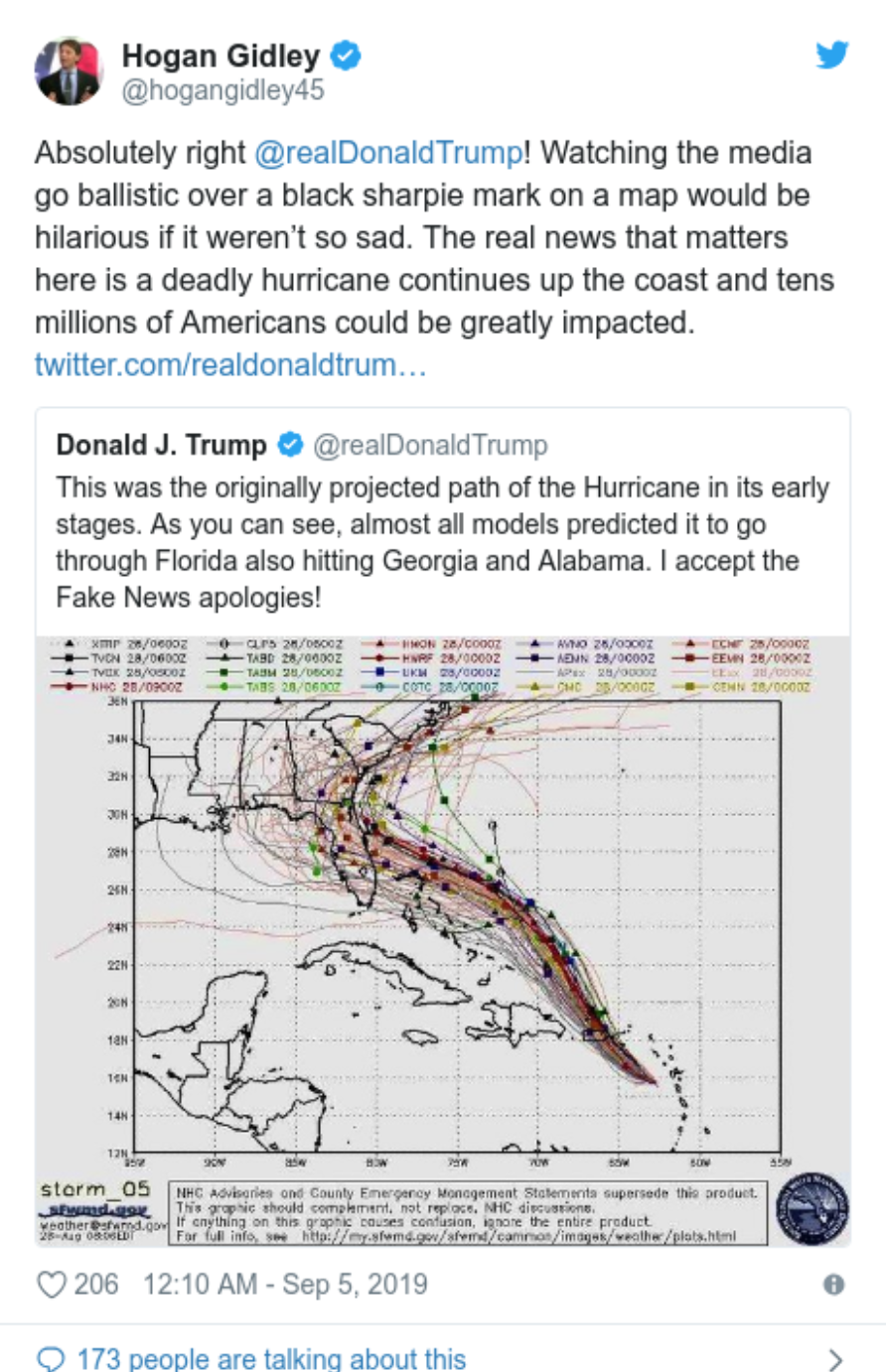 About an hour later, he said at a Federal Emergency Management Agency (Fema) briefing that the hurricane “may get a little piece of a great place: It’s called Alabama”.

The same day, NOAA spokesman Christopher Vaccaro made clear in an email to reporters: “The current forecast path of Dorian does not include Alabama.”

He seized on remarks by ABC News’ White House correspondent Jon Karl, who noted the president had “misstated the storm’s possible trajectory”.

Mr Trump tweeted on Monday: “Such a phony hurricane report by lightweight reporter @jonkarl of @ABCWorldNews.

“I suggested yesterday at FEMA that, along with Florida, Georgia, South Carolina and North Carolina, even Alabama could possibly come into play, which WAS true.”

According to AP news agency, forecasts from last Friday indicated that a small strip of Alabama might be affected by Dorian.

However, by Saturday morning meteorologists were no longer predicting the southern state would be in the hurricane’s path.

It was 24 hours later that Mr Trump began asserting that Alabama was at risk from Dorian.

On Wednesday evening, Mr Trump cited the original forecasts to argue that he was right all along.

White House spokesman Hogan Gidley confirmed the map had been altered with a black felt-tip pen, known as a sharpie in the US, but did not say who made the edit. 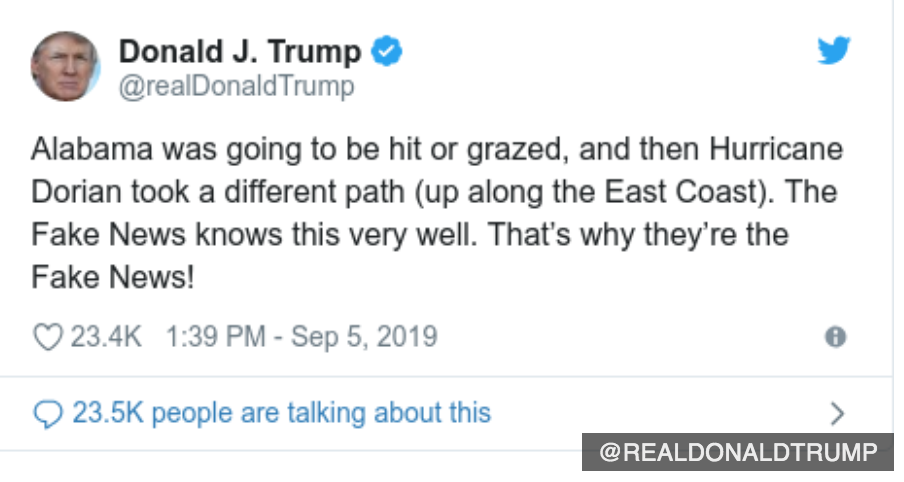 By Thursday morning #sharpiegate was trending on Twitter in the US and the president tweeted again about Alabama.

Some analysts noted that it is illegal to alter official weather maps.

According to Cornell Law School, US law says anyone who “knowingly issues or publishes any counterfeit weather forecast” can face up to 90 days in prison.

The head of the National Oceanic and Atmospheric Administration on Tuesday defended a regional National Weather Service (NWS) office in Alabama that told residents the state was not at risk from Hurricane Dorian and said no one will lose their jobs.

President Donald Trump wrote on Twitter on Sept. 1 that “in addition to Florida – South Carolina, North Carolina, Georgia, and Alabama, will most likely be hit (much) harder than anticipated.”

The NWS Birmingham office quickly responded on Twitter: writing: “Alabama will NOT see any impacts from #Dorian. We repeat, no impacts from Hurricane #Dorian will be felt across Alabama. The system will remain too far east.”

After days of controversy, NOAA released an unsigned statement Friday that suggested the Birmingham tweet “spoke in absolute terms that were inconsistent with probabilities from the best forecast products available at the time.”

It referenced a storm probability map that on Sept. 1 forecast a 5-10% chance of tropical storm force winds hitting a small sliver of southeast Alabama.

Neil Jacobs, NOAA’s acting administrator, said at a conference on Tuesday in Alabama that the Friday statement “did not say that we understood and fully support the good intent of the Birmingham weather forecast office, which was to calm fears in support of public safety.” He added that “at one point Alabama was in the mix, as was the rest of the southeast.”

Commerce Department Inspector General Peggy Gustafson is reviewing NOAA’s Friday statement, said Robert Johnson, Gustafson’s chief of staff, in an email to Reuters, declining to elaborate and saying the office “does not comment on open matters under review.”

On Monday, the New York Times reported Gustafson told NOAA staff to preserve records related to Friday’s statement, saying it calls “into question the NWS’s processes, scientific independence, and ability to communicate accurate and timely weather warnings and data to the nation in times of national emergency.”

“No one’s job is under threat, not mine, not yours. The weather service team has my full support,” Jacobs said. “Weather should not be a partisan issue.”

A spokesman for Ross said he “did not threaten to fire any NOAA staff over forecasting and public statements about Hurricane Dorian.”

Senator Jeanne Shaheen, a Democrat, said she was “deeply troubled that NOAA is politicizing weather prediction critical for the protection of life and property in contravention of internal operations services and policy directives.”

Cost Of Infrastructure Fixes Is Going Up While Trump Procrastinates (#GotBitcoin?)