Program will reward or punish companies for their behavior, but foreigners worry Beijing will use it to impose political orthodoxy on international firms. China’s Potential New Trade Weapon: Corporate Social Credits (#GotBitcoin?) 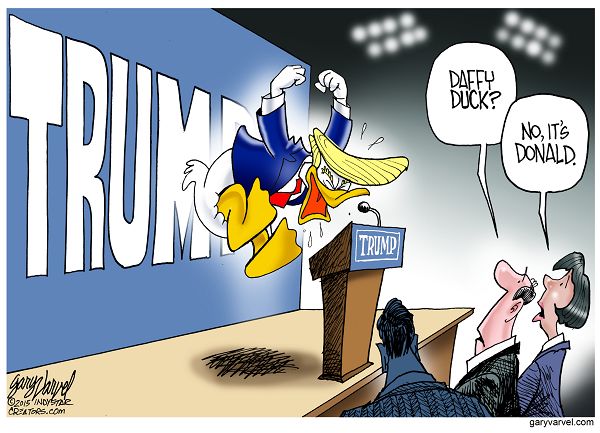 Presidential candidate, Donald Trump, has been critical of fellow Replubicans including Sen. John McCain. Some voters are curious about his “daffy” behavior.

After five years, China is putting the finishing touches on a sweeping new system to punish and reward companies for their corporate behavior. But foreigners worry that, amid the continuing U.S.-China trade dispute, Beijing will use its new corporate “social credit” system as a weapon against international businesses.

While Beijing’s better-known plans for a social-credit system for individuals have stirred privacy concerns, a parallel effort to monitor corporate behavior would similarly consolidate data on credit ratings and other characteristics, collected by various central and local government agencies, into one central database, according to China’s State Council. The system is set to fully debut next year.

An algorithm would then determine to what degree companies are complying with the country’s various laws and regulations. In some cases, companies could be punished by losing access to preferential policies or facing stricter levels of administrative punishment, a State Council document showed. Analysts said that other punishments could include denial of access to land purchases, certain loans and procurement bidding.

The imminent nationwide implementation of Beijing’s corporate social-credit system is unnerving foreign businesses, which have been bracing for further countermeasures from Beijing as the trade war continues to take unexpected twists and turns.

Beijing said in late May that it is drawing up a blacklist of entities it deems unreliable in apparent retaliation against Washington’s campaign targeting Chinese telecommunications giant Huawei Technologies Co.

“It makes the instruments of the social-credit system usable as a tool in the trade conflict,” said Björn Conrad, chief executive and co-founder of Sinolytics, a China-focused consulting firm that is publishing a report Wednesday on Beijing’s new social-credit system, together with the European Union Chamber of Commerce in China.

Mr. Conrad said some of the language used in recently released draft rules for a blacklist of heavily distrusted entities—which is a part of the corporate social-credit system—echoed the Beijing authorities’ warnings about their planned unreliable foreign-entities blacklist, suggesting that the two efforts are intertwined.

A separate report released Tuesday on the corporate social-credit system by Beijing-based consulting firm Trivium China, whose clients include foreign companies, doesn’t link it to the U.S.-China trade war but said the system “will provide the government with vast amounts of systematized data,” and warned about the possibility of Beijing “co-opting technology to enforce political orthodoxy.”

Beijing’s social-credit system is set to add to the complexities of doing business in China, a tantalizing but frustrating market.

The amount of data collected by authorities administering the corporate social-credit system would give them “a massive X-ray of the Chinese economic landscape,” said Jörg Wuttke, president of the EU Chamber in China. The chamber’s report said that a foreign company blacklisted by tax authorities in, say, Hubei province could find that information used by other government agencies in other provinces to punish the company.

While some analysts are hopeful that the system could also allow for more objective standards to be applied to foreign and domestic companies, the new regulations will likely mean higher compliance costs and more uncertainty for foreign businesses.

Some of China’s biggest and best-known corporate giants are deeply involved in the rollout of the new corporate social-credit system: Huawei, e-commerce and cloud services operator Alibaba Group Holding Ltd. and mobile services giant Tencent Holdings Ltd. are all named as members of a consortium developing one of the system’s key databases, according to a Chinese government procurement notice.

These companies, as well as the government agencies leading the implementation of the corporate social-credit system—the State Council, State Administration for Market Regulation, the National Development and Reform Commission and the Ministry of Commerce—didn’t immediately respond to requests for comments.

Besides credit ratings, the system incorporates various blacklists of companies caught doing something illegal or undesirable, such as spreading information deemed inappropriate online or violating safety standards, according to the separate reports by Trivium and the EU Chamber. The system also includes lists of companies with great credit scores. Some of the credit information would be publicly accessible online.

China’s social-credit system has been under development since 2014, well before the U.S.-China trade war. The State Council published a blueprint for the program, which it said would “build sincerity” in economic, social and political activity.

New requirement will further increase the government’s scrutiny of its people.

Chinese citizens registering for new mobile-phone services will now have to scan their faces to verify their identities, a move that will further increase the government’s scrutiny of its people.

The requirement, which came into effect Sunday, is aimed at minimizing telephone fraud and preventing the reselling and illegal transfer of mobile phone cards, the Ministry of Industry and Information Technology said in a notice in September. In the past, Chinese citizens applying for a new mobile phone number had to personally present an identity card.

Concerns have grown as facial recognition becomes more and more prevalent in China, with authorities applying artificial intelligence to sift through reams of data collected in a bid to boost the economy and centralize oversight of the population.

China is home to some of the world’s most prominent facial recognition startups, and citizens can make payments, board planes and enter office buildings with a quick scan of the face. Still, its use has been controversial, most notably in Xinjiang, a region in the country’s northwest where authorities have used the technology to surveil its Uighur Muslim minority.

Analysts say the implementation of facial recognition for identity verification by Chinese telecom providers and the lack of any alternative for anyone looking to get mobile services raise fresh worries about security and privacy.

The ministry had given telecom companies until the end of November to put into place measures in their physical outlets that use “artificial intelligence or other technological means” to ensure the identity of new applicants can be verified with their facial data. The law doesn’t make any reference to a user’s nationality and doesn’t address mobile virtual network operators, which resell services like roaming and text messaging from conventional operators. It also doesn’t address existing mobile service customers.

“From the individual standpoint, it is a little scary because it feels like you don’t have a lot of privacy,” Mr. Cavender said. “There is a pervasive sense of someone knowing what you’re doing at all times.”

As concerns have mounted, so has a pushback against facial-recognition technology and other perceived intrusions into personal privacy. Last month, a Chinese law professor in eastern China raised a rare legal challenge over the way facial-recognition was being deployed commercially.

The lawyer, Guo Bing, sued a wildlife park and zoo in Hangzhou for violating his consumer rights by making it mandatory for park members with annual passes to share their facial data as part of a new entrance system. Mr. Guo declined to comment on the status of the case.

On Nov. 20, a group of more than two dozen companies led by Chinese artificial-intelligence startup SenseTime Group was created to develop a national standard for facial-recognition technology, the Hong Kong-based company wrote in a social media post last week. The standards will help regulate and improve how facial recognition is used in China, SenseTime said.