The president was reportedly “eager to project optimism that might boost markets,” which should hearten the Chinese. Aides Admit Trump Was Faking Those “Phone Calls” With China (#GotBitcoin?)

At last week’s G7 summit in Biarritz, Donald Trump gave an entire network of world leaders whiplash when he declared, contrary to weeks of threats, that not only did the Chinese seem amenable to a trade deal, but that he’d actually heard from Beijing’s top officials that very week. “China called last night our top trade people and said, ‘Let’s get back to the table.’ So we will be getting back to the table and I think they want to do something,” the president told reporters. “They have been hurt very badly but they understand this is the right thing to do and I have great respect for it. This is a very positive development for the world. I think we are going to have a deal.” 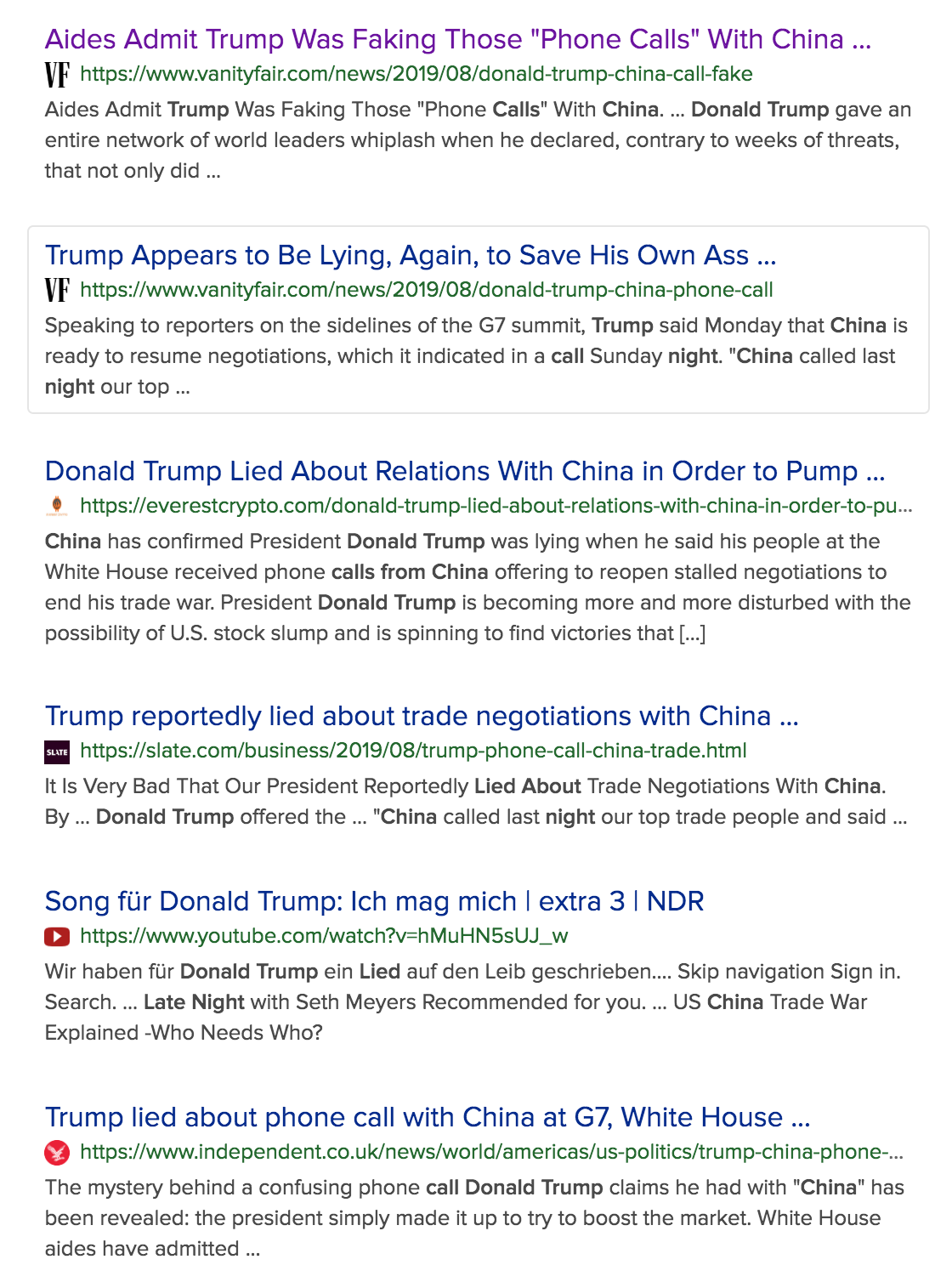 At the time, China’s Foreign Ministry claimed to have no idea what Trump was talking about—the implication being that he’d fabricated the call to calm a panicked market. And on Thursday, CNN reported that this was basically the case:

Though Trump and Treasury Secretary Steven Mnuchin insisted there had been “communication,” aides privately conceded the phone calls Trump described didn’t happen they way he said they did.

Instead, two officials said Trump was eager to project optimism that might boost markets, and conflated comments from China’s vice premier with direct communication from the Chinese.

This should come as something of a relief to the Chinese, who were flummoxed by Trump’s initial claims. “Regarding the phone call in the weekend, I am not aware of that,” Foreign Ministry spokesman Geng Shuang told reporters last week. “I can tell you clearly that I haven’t heard of such a thing.” And it may indicate why the president was so hesitant to offer any detail on said calls, instead telling reporters, “We have had calls at the highest level, but I don’t want to talk about that.” Could it be that Trump was genuinely confused about communications coming from China? Sure. Could it also be that he’s desperate for a win after virtually an entire presidency of failures? Seems likely!

Per CNN, Trump is increasingly aware that he’s done little to entice voters in 2020—and failed to follow through on many of his promises in 2016. For example, instead of beating China into submission through the art of the deal, he’s sparked an international trade war that is actively hurting consumers. Obamacare still exists. And he has yet to build a wall at the southern border and make Mexico pay for it. His response to the wall issue has reportedly been to assure aides he’ll pardon them should they break the law in the process of building the thing—something he’s urged them to do as quickly as possible. Who’s to say his solution to an ostensible stalemate with China wouldn’t involve a little fabrication? Just to grease the wheels. Aides Admit Trump Was, Aides Admit Trump Was