Treasury secretary nominee Steven Mnuchin failed to disclose about $100 million in assets and a number of business directorships to the Senate until the night before his confirmation hearing. Trump’s Treasury Pick (Steven Mnuchin) Failed To Disclose $100 Million In Assets — Until The Last Minute (#GotBitcoin?) 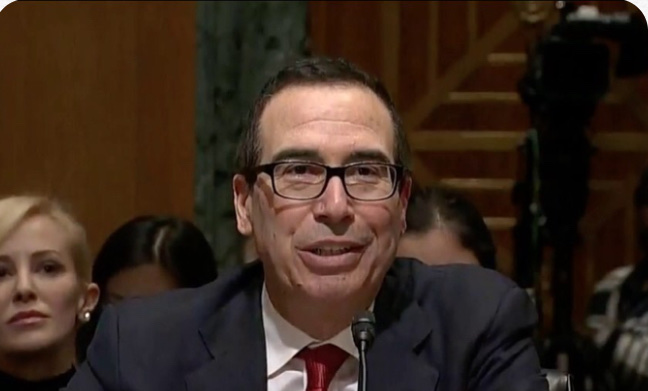 Democrats on the Senate Finance Committee jumped on this mistake during Mnuchin’s confirmation hearing, saying that he was attempting to hide assets from his disclosure forms.

Among the assets that Mnuchin failed to disclose included real estate in New York City, Los Angeles, and Mexico.

Additionally, Mnuchin failed to disclose his role as director of a number of investment funds including a subsidiary of his hedge fund based in the Cayman Islands and another in Anguilla.

Democrats used the disclosure to question both Mnuchin’s honesty as well as his qualification as a representative of the American public, contrasting him with Trump’s repeated promise to “drain the swamp.”

Democratic Sen. Ron Wyden said that Mnuchin failed to disclose these holdings until Wyden’s staff brought them to the nominee’s attention.

“This was not self-corrected. The only reason it came to light was my staff found it and told you that it had to be corrected,” said Wyden, the ranking member on the committee.

Mnuchin defended himself by saying that the omission was due to the complexities of the disclosure forms.

“I think as you all can appreciate filling out these government forms is quite complicated,” said Mnuchin. “There were many things I expected in this job including having to sell everything, but the amount of paperwork in filling out the forms … was quite a job.”

Mnuchin went on to say that “any oversight was unintentional” in regard to omitted assets.

Additionally, Mnuchin defended the Cayman Island and Anguilla holding companies by saying the shell companies were created for his hedge fund to allow certain types of investments for pension funds and nonprofits. The Treasury nominee said he did not benefit from the setup.

“Let me just be clear again: I did not use a Cayman Island entity in any way to avoid taxes for myself,” said Mnuchin. “I paid US taxes on all that income. So there was no benefit to me from the Cayman entity.”

The rest of the hearing was equally as contentious with Democrats and some Republicans hitting Mnuchin for foreclosures at a bank owned by his fund, Trump’s foreign investments, and regulation of banks.