Housing markets across the world, from the U.K. to China to Australia, are losing steam, holding back prospects for the global economy that last year grew at its slowest rate since the financial crisis. 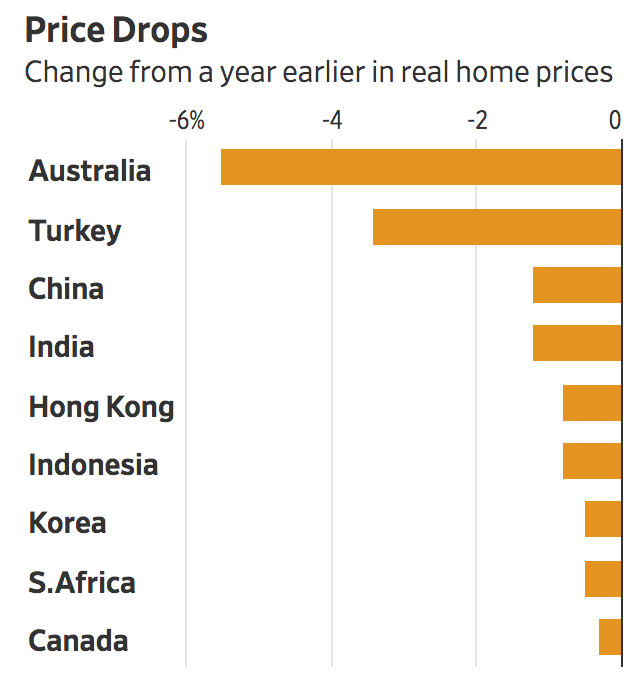 Across 23 countries, an index of inflation-adjusted home prices compiled by the Federal Reserve Bank of Dallas grew 1.8% in the third quarter of 2019 from a year earlier, down from a recent peak of 4.3% in 2016, according to an Oxford Economics analysis. In 18 large economies, world-wide residential investment dropped on a year-over-year basis for four consecutive quarters through September, the longest stretch of declines since the 2008-09 crisis, according to Oxford Economics’ analysis of national accounts.

Investors Are Buying More of The U.S. Housing Market Than Ever Before (#GotBitcoin)

Phoenix Provides Us A Glimpse Into Future Of Housing (#GotBitcoin?)

A key catalyst is the global slowdown over the past two years that kept a lid on housing demand and home-price gains. In large cities, affordability constraints are deterring many would-be buyers, and foreigners’ appetite for overseas properties has cooled. Heightened uncertainty, for example over the U.S. trade war with China, Brexit and protests in Hong Kong, continue to weigh on home-buyer sentiment.

“It matters because…the housing market is a big asset market which has quite large potential impacts on consumer spending,” said Adam Slater, an economist at Oxford Economics. “It tends to be a sector when it booms, it booms; when it busts, it busts.”

The slowdown isn’t flashing signs of turning into a bust. That largely hinges on global growth and uncertainty. The International Monetary Fund on Jan. 20 projected global growth would improve from 2.9% last year to 3.3% this year and 3.4% next, though that is still below the postcrisis average.

Even though homes aren’t tradable, like soybeans or car parts, home prices across the world have become increasingly synchronized. This reflects a variety of factors, according to the IMF, including the increasing tendency for economic growth and interest rates to move in parallel across nations.

For global cities like New York, London and Vancouver, Canada, another factor is at work, according to the IMF. In the period of low interest rates following the global financial crisis, wealthy investors in the hunt for better yields swooped in to buy properties in major financial hubs. In effect, residential prices in those cities have become globally synchronized much as stocks and bonds are.

Now, home prices in large cities are pulling back, according to an index of high-end markets in 45 cities maintained by Knight Frank, a London-based real-estate consulting firm. The index grew 1.1% in the third quarter of 2019 from a year earlier, down from 3.4% in the same period in 2018 and 4.2% in 2017.

Homes, like stocks, are a part of consumers’ overall wealth, meaning the housing slowdown, in turn, could further eat away at global growth if homeowners feel less well-off and curb their spending. This appears to have materialized in some nations. Spending growth in Canada and Sweden slowed by more than 1 percentage point in 2018 as home prices declined, the Bank for International Settlements said in its 2019 annual report.

A flurry of property-market regulations is another factor chilling home-price gains. Vancouver introduced a foreign buyer tax of 15% in 2016 and raised it to 20% in 2018. Seoul tightened mortgage regulations and announced a price cap on residences. New Zealand banned overseas investors from buying existing homes in 2018.

Cooling home prices could have a positive effect: Pricey markets could become more affordable and make a collapse in the property market less likely.

The current slowdown looks different from the lead-up to the 2008-09 crisis, when a global credit boom went bust and real home prices declined as much as 6.6% across the world’s major economies, according to Oxford Economics. Policy makers are more alert to the risks of housing bubbles, and banks have made it more difficult to access mortgages. Though rising household debt presents risks in some countries, BIS said that in many nations at the center of the crisis, household debt-to-GDP ratios are below precrisis levels.

Home prices are outpacing income gains in many countries, but not by nearly as much as in the precrisis years, said Enrique Martínez-García, an economist at the Dallas Federal Reserve. “The housing market is not giving us red signals of danger as it did,” Mr. Martínez-García said.

Should the slowdown turn into a more serious bust, it would test central banks, many of which cut interest rates last year to buffer their economies. In theory, interest-rate cuts should spur demand for housing by making mortgages cheaper. That appears to have happened—to an extent—in the U.S. Since the Federal Reserve cut interest rates last summer, U.S. home buying is up. But, interest rates around the globe are near record lows. Mr. Martínez-García said there is a point at which lowering long-term interest rates can no longer effectively prop up residential investment. “We might be reaching that point,” he said.

Condo Conversions Near The End, A Casualty Of Rent Reform (#GotBitcoin?)

This Startup Wants To Sell You A Slice of A Rental Home (#GotBitcoin?)

Realtors And Developers Are Selling Wellness, Whether It Works or Not (#GotBitcoin?)