According to the WTO, that points to “a loss of momentum in world services trade,” although it added that cross-border sales of services were likely to hold up better than sales of goods. The WTO said trade in services had already slowed sharply in the first three months of 2019, recording an increase of 3.6% from a year earlier, down from 5.1% in the final three months of 2018. Service Sector Also Impacted By Negative Affects Of Trumponomics (#GotBitcoin?)

Rising tariffs have contributed to a decline in cross-border sales of goods, contributing to a weakening of global economic growth as factory output declines.

The impact of the U.S.-China trade war, until now largely confined to manufacturing, may be spreading to the trade in services, a development that could further drag on global economic growth.

Rising tariffs have contributed to a lengthening decline in cross-border sales of goods, contributing to a weakening of global economic growth this year as factory output declines. That has prompted an increasing number of central banks to cut their key interest rates in an effort to protect jobs and limit the impact of higher tariffs on other sectors of the economy, but chiefly services.

The World Trade Organization on Monday launched a new Services Trade Barometer that aims to flag changes in volumes over coming months. The measure fell to 98.4 in June, below the long-term average of 100 and down from a recent peak of 103.1 a year earlier.

The kinds of services covered by the measure range from air travel to information and communications technology.

“Tariffs, trade wars, and uncertainty over Brexit are contributing to a weaker demand environment than we saw in 2018,” said Alexandre de Juniac, IATA’s director-general.

The new measure follows the release earlier this month of a global measure of activity in the services sector for August that pointed to a slowdown that was partly due to a drop in export orders.

International trade in services still lags behind trade in goods, although improved communications technology and digitization has helped it catch up over the last decade. In 2018, exports of services from members of the Group of 20 leading economies totaled $3.1 trillion, up from $2.1 trillion in 2008. While exports of goods also increased, to $10.8 trillion from $8.3 trillion, it did so at a slower pace.

However, a setback to the services sector could have an impact on economic growth in the U.S., where it accounts for 80% of economic activity, a larger share than the 70% of output that it accounts for in the European Union.

Sales of goods across national borders have been falling sharply since the final months of 2018, and were down again in the three months through June as exports from and imports to China fell. Economists at ING Bank expect trade volumes to be 0.2% lower this year than last, the weakest outcome since 2009, when the global economy was reeling from the impact of the financial crisis.

“The outlook for world trade is moving from bad to worse,” said Raoul Leering, head of trade analysis at the Dutch bank.

The slowdown in goods trade is partly the result of an escalating trade conflict between the U.S. and China, which has seen President Donald Trump announcing higher tariffs on a widening range of products, prompting Chinese retaliation.

There were some signs last week that tensions may be easing, with Mr. Trump delaying by two weeks the imposition of planned new tariffs that would have taken effect Oct. 1, the 70th anniversary of Communist Chinese rule. China responded by exempting purchases of U.S. soybeans, pork and other agricultural products from punitive tariffs, a move that appears aimed at addressing one of President Trump’s most pressing demands. However, there have been a number of false dawns during the protracted conflict.

U.S. and eurozone services-sector activity softened in September, according to surveys of purchasing managers, suggesting a manufacturing downturn is spreading to other parts of the global economy.

Fresh signs of a world-wide economic slowdown have pushed down asset prices this week and raised expectations for further action by central banks to support growth.

In the U.S., two surveys of services activity continued to grow, but at a slower pace.

The Institute for Supply Management’s U.S. nonmanufacturing index was 52.6 in September, the lowest reading since August 2016 and down from 56.4 in the prior month. Meanwhile, the IHS Markit services index was 50.9 in September.

As the threat of a recession looms, the eurozone area faces the added headwind of new tariffs on its exports to the U.S. The U.S. plans to swiftly impose tariffs on $7.5 billion in aircraft, food products and other goods from the European Union after the World Trade Organization authorized the levies Wednesday, citing the EU’s subsidies to Airbus SE.

The September slowdown in services was sharpest in Germany, whose factory output has already fallen on cooling demand for its exports and problems in its key automobile sector.

Economy Gets A Haircut As Americans Don’t 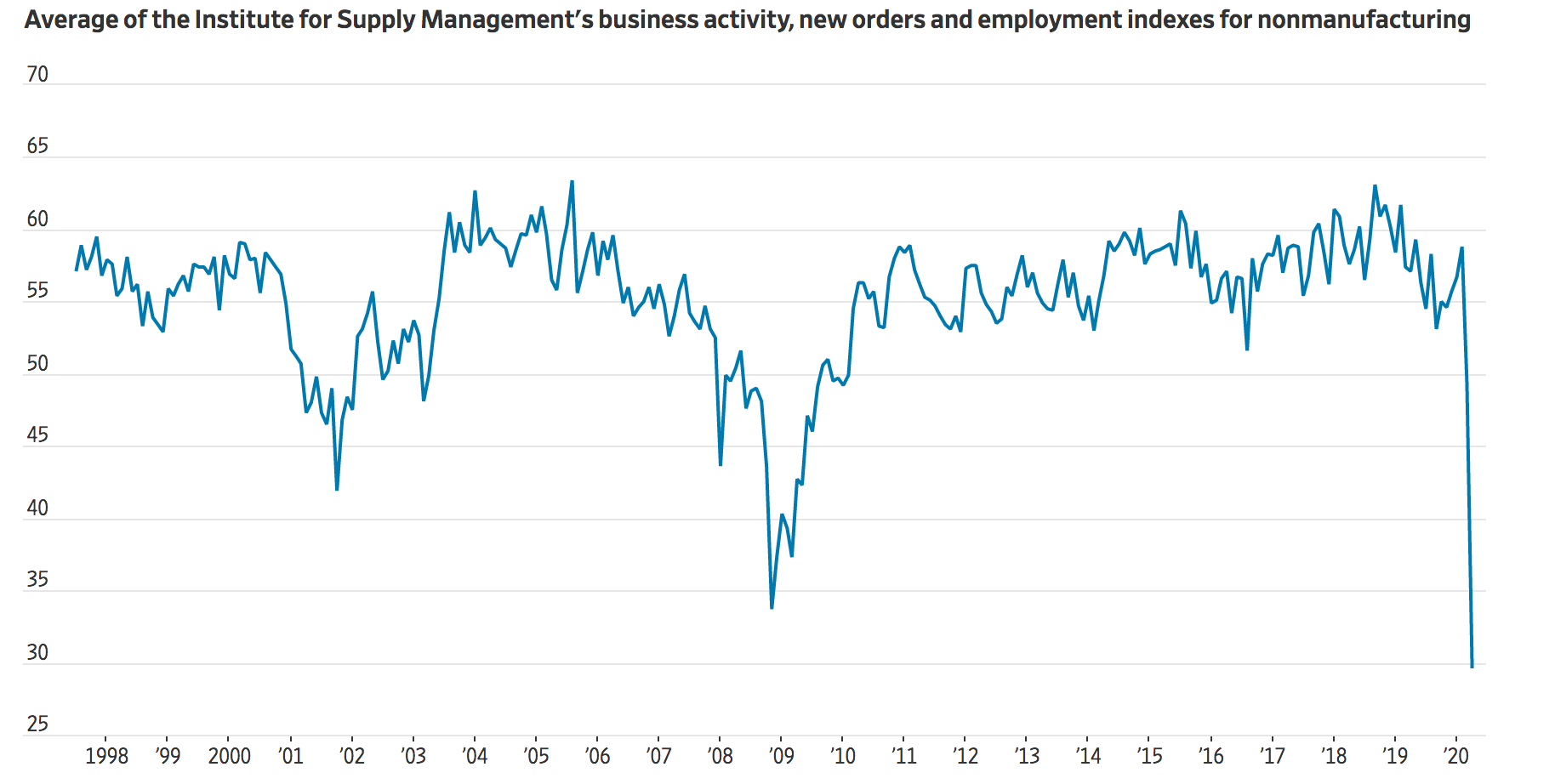 When a recession comes, it is usually manufacturers and other goods-producing industries that get kicked in the teeth. This time it is services’ turn.

The Institute for Supply Management said that its index for nonmanufacturing activity fell to 41.8 last month from 52.5 in March, marking its lowest level since March 2009. Anything below 50 represents a contraction in activity. As with its companion manufacturing gauge that came out last week, the index was again distorted by a slowdown in supplier delivery times: Usually when deliveries slow it is a sign that suppliers are struggling to meet rising demand and business is picking up. Now it is because the novel coronavirus crisis has disrupted supply chains. The other components of the index—business activity, new orders and employment—were at their lowest levels in the 24-year history of the data.

All but 3 of the 22 industries in the nonmanufacturing report are in the services sector, and the drop it is showing reflects the unprecedented hit the sector has taken from the coronavirus crisis. In past recessions it has always been goods-producing sectors such as manufacturing and construction that have suffered the most and that have driven declines in activity—even during the last recession, which was unusually harsh for services. Commerce Department figures show the 2.9% decline in private service-sector activity back then was dwarfed by an 11.7% drop in goods-providing activities.

But one of the things that makes this recession different, and also so severe, is that it is being driven by losses in the service sector. Shutdowns and other social-distancing measures are walloping areas of the economy that were better shielded in previous downturns. People, feeling pinched in the past, may have deferred big-ticket purchases like new cars, but they didn’t entirely stop going to restaurants, much less getting their hair cut.

Part of why that is so bad for the economy is that the private service sector is so large, accounting for about 70% of gross domestic product compared with about 17% for the goods-producing sector. Moreover, more than five times as many employees work in the private service sector as the goods-producing sector. Friday’s employment report will reflect how bad the damage has been. An analysis of data from scheduling and time-clock software provider Homebase conducted by economists André Kurmann, Etienne Lalé and Lien Ta suggests it will show two service-sector industries alone—leisure and hospitality and retail—shed about 20 million jobs last month.

The damage to the service sector will also shape the recovery, when it comes. After a typical recession ends, there is usually a bounce back in spending as people and businesses catch up on deferred spending—they finally trade that clunker in for a better car, or replace that equipment that got worn down. That will certainly happen to an extent when this recession ends but, as economist Gabriel Mathyhas pointed out, much of the business that has been lost in this recession will be gone for good. People may flock to restaurants, but not enough to make up for all the meals out they didn’t have. And they will never make up for the missed haircuts.