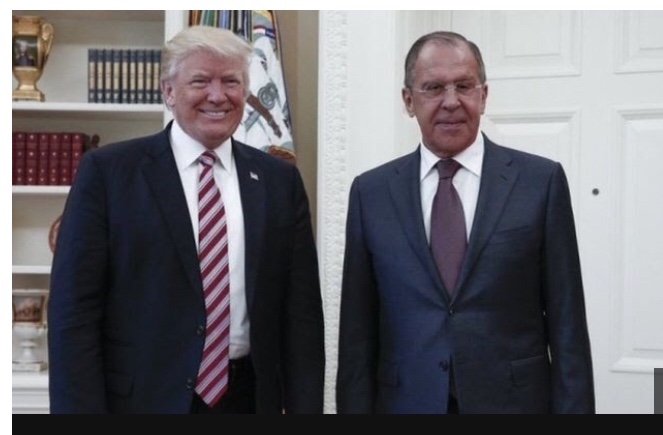 The President Met Senior Russian Officials, Including Foreign Minister Sergei Lavrov, In The White House In May 2017

The move brought to an end the career of one of the C.I.A.’s most important sources.

It also effectively blinded American intelligence officials to the view from inside Russia as they sought clues about Kremlin interference in the 2018 midterm elections and next year’s presidential contest.

Details have emerged of an alleged high-level spy the US reportedly extracted from Russia amid fears his cover was about to be blown.

Russian media named him as Oleg Smolenkov, who worked for a key aide to President Vladimir Putin.

The CIA had feared President Trump’s “mishandling” of intelligence could put the spy at risk.

The extraction came after the president met senior Russian officials, including Foreign Minister Sergei Lavrov, in the White House in May 2017 and had unexpectedly shared classified US intelligence.

Was Extraction Related To Trump?

The CIA reportedly first tried to extract the mole soon after a now-infamous meeting between President Trump, Russian Foreign Minister Sergei Lavrov and then-Russian ambassador to the US, Sergei Kislyak, at which Mr Trump was said to have shared classified operational details which could have exposed a US confidential source.

Other officials present at the meeting reportedly realized the president’s mistake and scrambled to inform the CIA and other intelligence agencies.

But the Russian mole reportedly refused the initial extraction attempt, citing family concerns – a move which threw the CIA for a time into doubt over the source’s trustworthiness. Months later, the CIA tried again and the source agreed to be exfiltrated.

There was a suggestion on Tuesday that President Trump directly compromised the source in Russia. However, the Trump administration said that widespread media speculation about US intelligence conclusions had contributed to the decision to extract the source.

Asked by the BBC on Tuesday about the reports, Kremlin spokesman Dmitry Peskov confirmed that Mr Smolenkov had worked for the presidential administration.

Last year, Russian operatives travelled to England and used a nerve agent in an assassination attempt against a former Russian military intelligence officer, Sergei Skripal, who had spied for the British.

And in 2006, Russian operatives killed a former intelligence officer, Alexander Litvinenko, in central London by poisoning his tea with radioactive material, according to British investigators.

Trump intentionally leaked this information so that the CIA would have to extract this agent!

Trump is indeed a clever one!

A Senate investigation of Russia’s media-influence operations in the 2016 election recommends that the Trump administration publicly underscore the danger of possible interference in 2020 and warns campaigns to scrutinize social media posts before sharing them with supporters.

The bipartisan report, released Tuesday by the Senate Intelligence Committee, is the result of more than 2 1/2 years of investigation.

The report’s findings—that Moscow interfered in the election, and that its interference sought to help then-candidate Donald Trump at the expense of Hillary Clinton —bolster conclusions reached by U.S. intelligence agencies nearly three years ago about Moscow’s interference. Those conclusions were further supported by former special counsel Robert Mueller’s own investigation.

But unlike those two assessments, the Senate report offers a litany of recommendations for technology companies, government agencies and lawmakers to better guard against future attempts to use the internet against American voters.

The report also recommends that Congress consider ways to facilitate cooperation between social-media companies and government agencies, and bolster information-sharing between the public and private sectors.

“Russia is waging an information warfare campaign against the U.S. that didn’t start and didn’t end with the 2016 election,” said committee Chairman Richard Burr (R., N.C.). “Social media companies, federal agencies, law enforcement and Congress must work together to address these challenges,” he said, while noting the need to balance national security interests with free speech.

Sen. Mark Warner (D., Va.), the top Democrat on the committee, called for more transparency around social-media posts and greater efforts to delete inauthentic accounts, and said Congress would have to act.

“We cannot expect social media companies to take adequate precautions on their own,” he said. “Congress must step up and establish guardrails to protect the integrity of our democracy.”