Investors watch for signs of whether insiders put more or less money into their own companies. U.S. Corporate Insiders Selling Shares At Fastest Pace Since 2008 (#GotBitcoin?)

Insiders at U.S. corporations are selling shares at a pace not seen since before the financial crisis a decade ago. 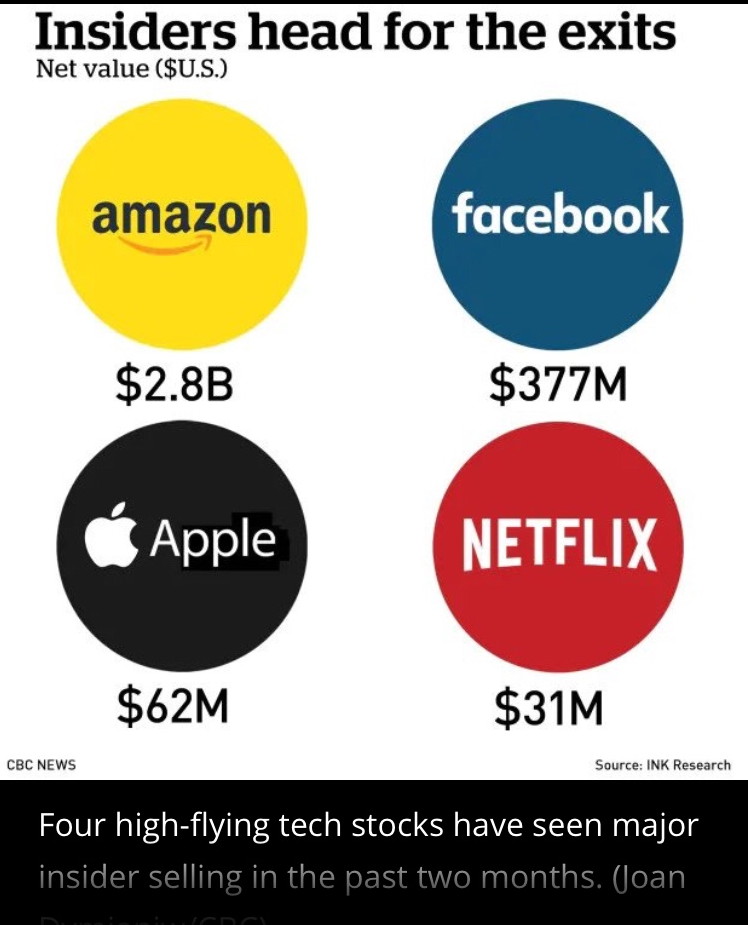 Insiders are people who work as directors or senior officers of companies, whose compensation often includes things like stock options and common shares so they have a vested financial interest in the companies for which they play key roles.

Because they are so fully invested and have access to data about how their companies are performing before the general public does, some investors believe valuable insights can be gleaned by watching whether insiders are putting more or less of their own money into them.

If that theory holds water, one message has been coming in loud and clear of late: sell.

According to research firm TrimTabs, in the month of August insiders at American companies were selling, on average, about $600 million worth of shares in their own companies a day (all figures US).

Five times this year already they’ve sold more than $10 billion worth of stock in a single month. The last time the markets saw that much selling that many times in a year was in 2006 and then again in 2007 — right before the stock market imploded in late 2008.

Analyst Winston Chua with TrimTabs says there’s nothing necessarily alarming about insiders cashing in, but it’s certainly “not a very positive sign.”

“It can be a bad sign of lack of corporate confidence.”

It’s also quite telling to note where much of the selling is taking place: tech stocks.

Insiders at technology companies, including the so-called FAANG stocks — an acronym for Facebook, Amazon, Apple, Netflix and Google — have been some of the biggest sellers. That could be a sign they think the impressive years-long run-up in the share prices of those companies is over.

Data from Canadian investment firm INK Research shows that Amazon insiders have sold $2,862,703,598 worth of shares in the company through July and August — three times the amount of any other company.

A good chunk of that was by founder Jeff Bezos, who was possibly selling shares to abide by the terms of his divorce agreement with wife MacKenzie, from whom he split earlier this year.

But other Amazon insiders have also been selling. And while the company may comfortably sit atop the insider selling leaderboard, other tech companies are on the podium.

INK president Ted Dixon tabulates that U.S. firms are seeing, on average, 55 net buys by insiders for every 100 sells at the moment. That’s not as low as the 30-per-100 seen earlier in the year but still considered low by experts — suggestive of an insiders’ market that is, on the whole, getting out.

“You’re seeing a lot of profit-taking in the U.S.,” Dixon said in an interview.

Dixon says it’s not necessarily a broad-based sell-off, since a number of sectors are actually seeing a lot of buying — particularly the hard-hit industrial and energy sectors in both the U.S. and Canada.

“We’ve seen a significant amount of insider [buying] activity in the oilpatch, which suggests we are nearing the worst of it for the sector,” he said. “Stock valuations have priced in a lot of bad news.”

But buyers trying to time the market bottom of those sectors are masking brisk selling activity in other areas.

Still, Dixon isn’t among those who thinks insider selling is a surefire predictor of bad things to come, since insiders may sell stock for all sorts of non-calamitous reasons — from paying taxes, to settling estates, as Bezos is doing, to calling in some cash to put to work in other investments.

Which is why he pays more attention to the buying, rarer though it may be at the moment.

“There can be many reasons insiders sell,” he said, “but usually when they buy it’s for one reason: they think they can make some money.”

Instead of being a warning of a major stock slump about to happen, Dixon views the current surge in insider selling as a sign that the rules have changed.

Technology stocks had a great run: investors did well to simply buy and hold them regardless of performance. But now fundamental research into underlying numbers is starting to win out again, and the belief in tech’s infallibility is starting to wobble.

“We are seeing an uptick in volatility,” Dixon said. “We are transitioning very slowly into a value-oriented stock pickers market.”

Chua agrees with that assessment.

“What I’m hearing from financial advisers is they think that because of increased volatility they think tech might underperform,” he said.

“People are rotating out of technology and going into maybe more conservative sectors.”

The Fed cited potential risks tied to borrowing by companies not in the financial sector, particularly leveraged loans—a $1.1 trillion market that the Fed warned is growing quickly despite consistently “weak” credit standards.

Fed Gov. Lael Brainard, in a statement, said low credit spreads—measured as the gap between yields on U.S. Treasurys and assets such as corporate debt—combined with high levels of indebtedness among “risky” nonfinancial corporates, including through leveraged loans, “merits heightened vigilance.”

She added that the “low-for-long” interest rate environment and the associated incentives to reach for yield and take on additional debt “could increase financial vulnerabilities.”

The document is the latest evolution in the Fed’s efforts to spotlight financial stability monitoring and follows years of more intense in-house research. It comes as investors’ recent recession fears have waned on a series of economic reports that turned out better than investors had feared.

In congressional testimony Thursday, Fed Chairman Jerome Powell said the central bank is optimistic its interest-rate cuts this year would buoy the U.S. economy against lingering headwinds. The Fed has cut its benchmark interest rate three times since July to cushion the economy against risks of a sharp slowdown from weakening business investment and global growth.

In Friday’s report, officials said deteriorating liquidity—or the ability to easily buy or sell—in the U.S. Treasury and equity-futures markets could lead to greater incidence of flash events in which prices move abruptly and sizably and then quickly revert.

“Flash events may undermine confidence in trading venues and financial markets even if the price dislocations are short-lived,” the Fed said, adding that because trading is increasingly connected across markets, flash events in one market could affect trading and liquidity in others.

While the banking sector overall is well-capitalized, the Fed said several large banks have announced plans to distribute capital to their shareholders in excess of expected earnings, “implying that capital at those banks will decrease.”

The stability report also identified potential economic shocks that could test the stability of the U.S. financial system, including slowing global economic growth and trade tensions.

Insiders Who Nailed Market Bottom Are Starting To Sell Stocks 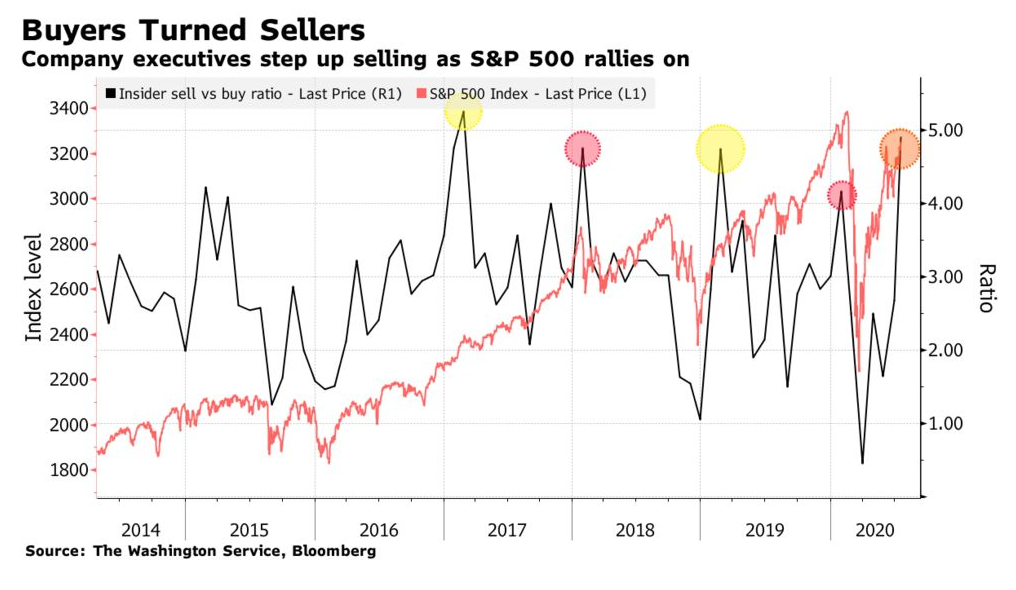 As U.S. stocks climb to their most expensive levels in two decades, the executives in charge of the companies benefiting from the rally are showing signs of anxiety.

Corporate insiders, whose buying correctly signaled the bottom in March, are now mostly sellers. Almost 1,000 corporate executives and officers have unloaded shares of their own companies this month, outpacing insider buyers by a ratio of 5-to-1, data compiled by the Washington Service showed. Only twice in the past three decades has the sell-buy ratio been higher than now.

Data from InsiderInsights.com showed a similar trend. Over the past four weeks, companies with insider selling have outnumbered those with buying by 186%, approaching the 200% level that has tended to mark short-term market tops in the past decade, according to Jonathan Moreland, the firm’s director of research.

The pickup comes after stocks rebounded from the bear-market selloff, lifting the S&P 500 more than 45% from its March low. Now, with tech stocks at all-time highs even as a pandemic and recession rage, some executives are lightening up.

While some analysts have warned against reading too much into insider sales because factors other than valuations can influence the action, a similar spike this year and in 2018 foreshadowed equity losses.

“Our indicator is now flashing a warning sign,” Moreland said. “I’m not prepared to say everybody should sell everything and short the market because of the recent insider data. The way I’m using it is, I’m more comfortable selling some of my winners. We still don’t trust the market’s recent recovery.”

UnitedHealth Group Inc. Chairman Stephen J. Hemsley and Morgan Stanley Chief Executive Officer James Gorman are among insiders that have sold shares of their own companies this month.

Executives were one of the few groups daring enough to go bargain hunting during the market rout in March. Back then, they scooped up shares at the fastest pace in nine years as stocks plunged into the fastest bear market on record.

Now, fewer than 200 corporate insiders have bought shares in July, compared with a full-month average of 1,160 during the first half of this year, Washington Service data show.

In terms of total value, insiders sold $52.6 million of shares last week while their purchases reached $3.4 million, according to data compiled by Bloomberg.

Corporate insiders has shown a mixed track record in timing their stock disposals. Their rush to sell at the start of this year proved prescient as the S&P 500 rose to an all-time high in February before crashing. So did the selling spree in January 2018, when the benchmark index’s advance to what was then a record preceded a correction. The dash to bail in 2017 and 2019, however, was met by continued equity gains.

“When the market is trading as it is, very close to all-time highs, it gives the optics that insiders don’t believe the market being at these levels,” Robert Pavlik, a senior portfolio manager at SlateStone Wealth, said by phone. “It presents the appearance that they think their stocks are overvalued. It may be true, but there is no definite way to tell.”

Open-Market Stocks Sales, Excluding Those Set Up Through 10B5-B Programs Or Related To Options, That Are Reported In Bloomberg Data In July Include: