Borrowing helped pull countries out of recession but made it harder for policy makers to raise rates. High Debt Levels Are Weighing on Economies (#GotBitcoin?)

Global interest rates are low and may head lower, driven by slowing economies and the U.S.-China trade war. A less appreciated reason for lower rates is a mountain of debt built up during the past decade.

Debt owed by governments, businesses and households around the globe is up nearly 50% since before the financial crisis to $246.6 trillion at the beginning of March, according to the Institute of International Finance, an association of global financial firms. 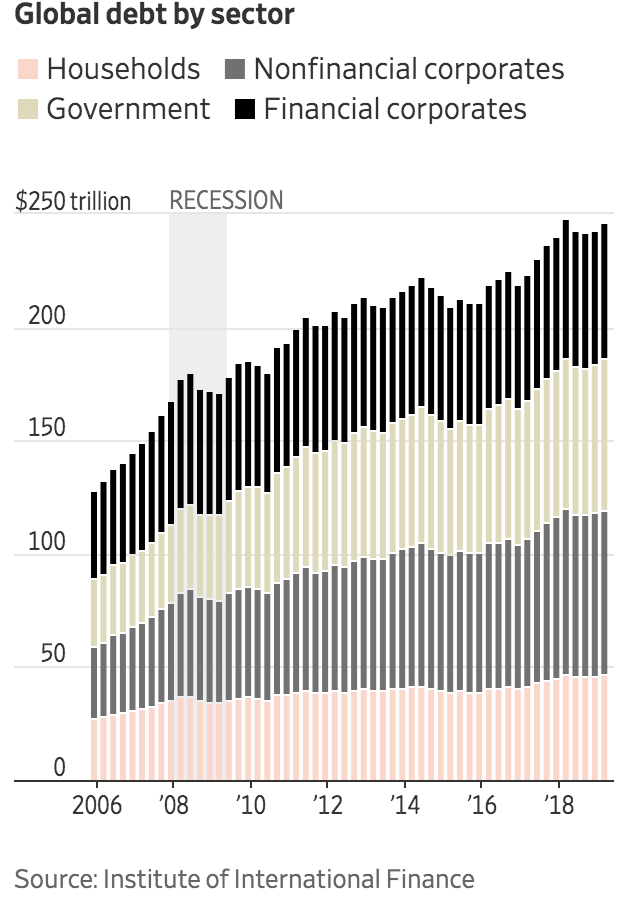 The borrowing helped pull economies out of the nasty recession, but left them with high debt burdens that make it harder for policy makers to raise rates. It also makes consumers and businesses more likely to pull back from spending money on new goods if economic conditions weaken.

“Globally, you are at worryingly high levels,” said Sonja Gibbs, managing director for global policy initiatives at the IIF. She said policy makers need to consider debt levels as they adjust interest rates. “There’s going to be an impact on the broader economy.”

In the U.K., Canada and Australia, central bankers have backtracked from rate increases in the past two years after consumers got bruised more than expected. U.S. consumers, who have borrowed to pay for college, cars and everyday spending, have been less affected because their debt burdens are much lower relative to their incomes.

“The world is in a delicate equilibrium,” said Mark Carney, governor of the Bank of England, in a February speech. “The sustainability of debt burdens depends on interest rates remaining low and global trade remaining open.”

Mr. Carney and other central bankers would have liked to raise rates further during the good years to give themselves room to cut when economies slowed. But the higher rates hit their economies harder than many expected.

“Tightening may have had more of a restraining effect than anticipated,” said Nathan Sheets, chief economist at PGIM Fixed Income and a former senior economist at the Federal Reserve. “It acts as a very powerful drag on spending.”

There is a direct connection between debt, interest rates and growth. Rising rates force consumers and businesses who take on adjustable-rate loans such as credit-card debt to pay more each month and reduce other spending. Even with fixed-rate loans, borrowers know they will have to pay higher rates to roll over the loans, so they start putting aside money that they would have otherwise spent.

It doesn’t take much for countries loaded down with debt to feel the strain. When the Bank of Canada raised interest rates in July 2017, the first increase in seven years, officials said higher rates signaled the economy was strong. 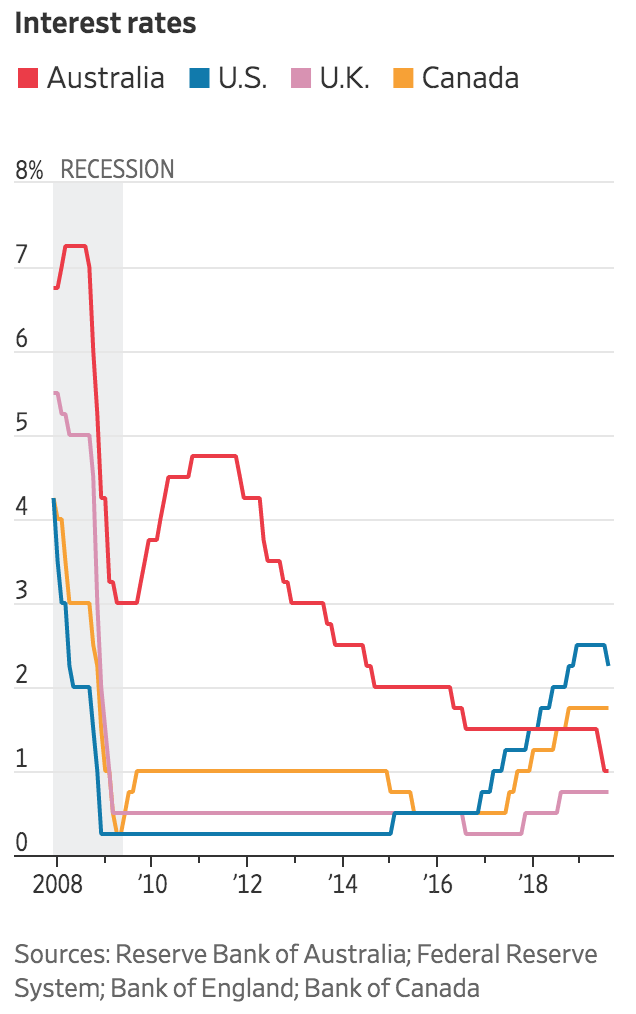 But the country’s households had been borrowing heavily, pushing their ratio of debt to after-tax pay to the highest level among the world’s most-advanced economies. After five increases drove the interest rate up to 1.75%, the resulting slowdown in growth was “sharper and more broad-based than we expected,” said former Bank of Canada deputy governor Lynn Patterson during a March speech. The bank stopped raising rates far short of the 4.25% level in place before the financial crisis.

U.S. consumers are better off because so much mortgage debt was wiped out in the financial crisis. The impact of higher rates was tempered by the popularity of fixed-rate mortgages.

Higher rates slowed home and auto sales. Companies such as toolmaker Stanley Black & Decker Inc. blamed weaker sales on higher rates. Others, including Coca-Cola Co. , complained about the impact of higher interest costs on their expenses.

In January, the Fed signaled it was pausing its rate increases after worries grew about the economy, including the housing market, global growth and the impact of the trade war. “The fundamentals for consumers are more worrying than we think,” Mr. Slok said.

The Bank of England, facing the risks of Brexit on top of growth and trade worries, last raised interest rates more than a year ago. One reason is that households and businesses are struggling with debt. Through the first three months of this year, households spent more money than they made, marking an unprecedented run of 10 quarters of net borrowing, according to the country’s Office for National Statistics.

Business defaults, meanwhile, rose in England and Wales during the second quarter of this year to the highest level since the first quarter of 2014, according to the government’s Insolvency Service. Short-term rates in the U.K. are at 0.75%, down from 5.75% in July 2007.

In Australia, where consumers owe $2 for every dollar they earn, economists at the country’s central bank found that every 10% increase in debt shaves household expenditures by 0.3%.

Philip Lowe, Reserve Bank of Australia’s governor, acknowledged that the borrowing is leading to softer consumption when he announced in July that the bank would lower its benchmark rate to an all-time low of 1%.

It appears poised to fall again. The board kept rates unchanged on Tuesday but in its September statement said it “will ease monetary policy further if needed to support sustainable growth in the economy and the achievement of the inflation target over time.”

The United States national debt is now over $23 trillion, according to website U.S Debt Clock.

It is also worth noting that the debt per United States citizen is $69,724 and that the debt to gross domestic product ratio is 106.65%.

The milestone has been pointed out on Nov. 1 by Bitcoin advocate Twitter personality Rhythm, who also said that every dollar of U.S. national debt is, in fact, a reason to buy Bitcoin (BTC). Another user presented another interesting take adding:

“All Fiat Money Will Die”

Host of the Keiser Report and cryptocurrency entrepreneur, Max Keiser, also says that central banks are contributing to Bitcoin’s success in a recent interview with tech news outlet Hackernoon published on Nov. 1.

For instance, the impact of the U.S. Federal Reserve’s quantitative easing monetary policy on the price of Bitcoin:

“It bottomed when the Fed signaled ‘Infinite QE’ recently at around $3,300 BTC. Global Central Banking is about to go bust. […] All fiat money will die.”

As Cointelegraph recently reported, Bitcoin proponents rang the alarm bells, pointing out that since mid-September, the U.S. Fed has effectively created hundreds of billions in new money — more than Bitcoin’s entire market cap of $165B — in a just a matter of days.