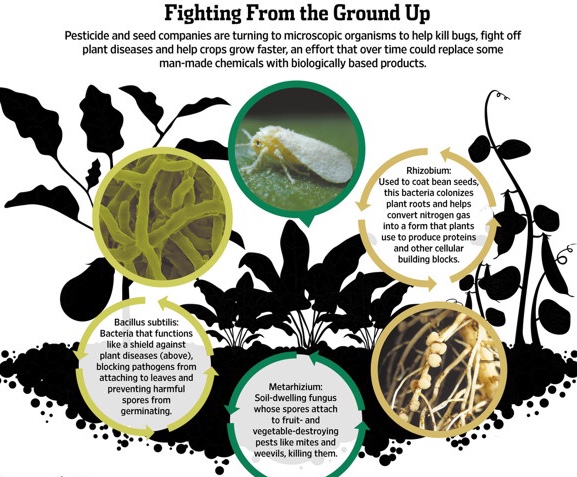 On his way to a conference in Orlando, Fla., Brian Vande Berg pulled his rental sedan over every 10 minutes to hike along beaches and marshes and occasionally stoop down to pack dirt into small, plastic vials. His target: microscopic, soil-dwelling organisms that agricultural companies consider a new frontier in protecting crops.

The push into microorganisms reflects an effort by agricultural companies to diversify beyond synthetic chemical pesticides, amid growing regulatory and consumer scrutiny. Pesticides and other products incorporating microbes typically can be rolled out faster than man-made chemical insecticides and weedkillers, which have drawn closer scrutiny from U.S. regulators in recent years following environmental concerns raised by consumers, advocacy groups and organic farmers.

Mr. Vande Berg, a research and development director in Bayer’s CropScience division, is part of an expanding hunt that has led researchers to far-flung corners of the U.S., combing dry creek beds and compost piles for tiny microorganisms. The companies aim to coat the outsides of the seeds with such beneficial microbes, and in other cases, spray them on growing plants.

“There are a lot of things [microbe-based products] can do that today we look to synthetic chemistry to do,” said Paul Schickler, president of DuPont’s seed unit, Pioneer.

Microorganisms have been narrowly used for decades in agriculture, mainly in coating soybeans and other legumes to better absorb nutrients and fight fungus. Now, companies say advances in genetic-analysis technology and cultivation practices enable them to find and develop new microorganisms that can perform much broader functions, such as shielding crops from more diseases and pests or mitigating damage from drought.

“The DNA diagnostics today give you a level of understanding you didn’t have five to 10 years ago,” said Robert Fraley, Monsanto’s chief technology officer.

Monsanto and its rivals for nearly 20 years have sold genetically modified seeds for crops like corn and cotton.

They splice in traits from other organisms that enable the seeds to produce bug-killing proteins or withstand the chemical sprays that the companies also sell.

Incorporating microscopic organisms such as bacteria and fungi represents a different approach, encouraging helpful bacteria and fungi to live on the plants’ surfaces, helping plants absorb nutrients and providing defenses against bugs and disease.

Microbe-based products face skepticism from some environmentalists. But because they don’t rely on genetic engineering or man-made chemicals, the products can be used in producing organic and natural foods. USDA rules bar organic products from containing genetically modified organisms, or GMOs, but permit the use of naturally occurring bacteria on organic crops—though the agency reviews such treatments in certifying farms as organic to make sure the products don’t include synthetic substances.

Biological pesticides, including bacteria-based products, today have annual sales of about $2 billion, or 4% of the $54 billion in global sales of chemical sprays, according to industry estimates.

But consumers and advocacy groups also are raising alarms over the environmental impact of man-made crop chemicals that dominate the market, such as glyphosate, widely sold by Monsanto as Roundup. That could help boost sales of bio-pesticides to $5 billion, or about 10% of the projected market, by the end of the decade, according to Piper Jaffray analyst Michael Cox.

Finding beneficial microorganisms is like looking for a needle in a field of haystacks.

‘The DNA diagnostics today give you a level of understanding you didn’t have five to 10 years ago.’

About 50 billion microbes live in a typical tablespoon of soil. Researchers have discovered effective microbes in samples from a Buddhist temple garden and a Hawaiian beach, and from less exotic locales like dry creek beds and compost piles. At Bayer, one promising microbe that kills caterpillars came from a sample taken in an employee’s backyard in North Carolina.

“It’s serendipity,” said Mr. Vande Berg. He said that he’s not sure whether any of the soil samples he collected on his Florida drive four years ago had yielded a breakthrough microorganism.

Pesticide makers pushed into the business through a string of deals. Germany’s BASF, the world’s largest chemical company by sales, in 2012 paid $1 billion to buy Becker Underwood, an Iowa firm specializing in biologically based pesticides. Bayer paid about $500 million that year for a similar business called AgraQuest Inc.

DuPont is building its microbe platform with technology acquired in its $6.5 billion deal for ingredient maker Danisco A/S in 2011. DuPont said in August it is building two new U.S. research facilities that will help develop such products. Monsanto, the largest seed maker by sales, said in August it plans to nearly triple microbe research efforts in 2015. It struck a partnership last year with Novozymes A/S, agreeing to pay the Danish biotech firm $300 million so Monsanto can use Novozymes’ technology and sell farm-friendly microorganisms they develop together.

Microbe-based products face challenges, too. Analysts said it is unclear the companies will be as successful making scientific advancements with microbes as they have been with GMO seeds and chemical sprays. “It could be a meaningful market, but it’s still years down the road,” said Jeffrey Stafford, an analyst with Morningstar Inc.

And some environmental groups warn that mass deployment of microorganisms across farm fields could yield its own problems, such as by spurring pests to more quickly develop resistance to bacterial attacks, leading to even tougher weeds and bugs.

Margaret Reeves, a senior scientist with the Pesticide Action Network, said that problem could end up requiring even more pesticide use. “The approach is still not one of long-term sustainability,” she said.