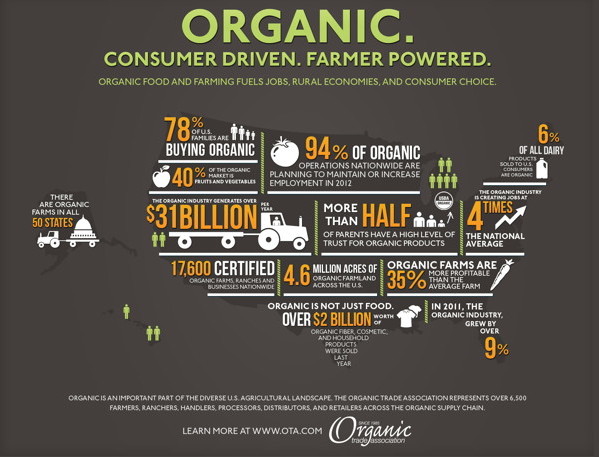 Among the starkest symbols of the problem in recent years are signs posted frequently at dairy cases at major U.S. supermarkets, apologizing to consumers for tight organic-milk supplies.

“You can have great brands and great products, but if you don’t have supply of [agricultural] products, you’re going to be in trouble,” said Irwin Simon, chief executive of publicly traded Hain Celestial Group Inc., a maker of organic and natural brands such as Earth’s Best and Health Valley with more than $2 billion in annual sales.

The three-decade-old Canadian company plunked down more than $2 million for 2,800 acres of Montana cropland, part of an effort to seize greater control of its supplies of wheat, oats and other ingredients. “We just want to secure our own future,” said founder Arran Stephens.

Nature’s Path is among a number of organic-food purveyors taking steps to tackle supply constraints that are hampering the growth of one of the hottest categories of the U.S. food industry. Companies including soup maker Pacific Foods of Oregon Inc. and publicly traded burrito chain Chipotle Mexican Grill Inc. are digging deeper into the supply chain with such moves as financing farmers, offering technical training and hiring full-time headhunters to recruit organic growers.

The efforts are aimed at ramping up organic-food output that has failed to keep pace with surging consumer demand, due in part to the significant costs and risks that U.S. farmers face in converting from conventional to organic farming. Longer-term, the steps could help bring down organic-food prices that have been bolstered by tight supplies, companies say.

Production of some crops, such as organic soybeans, is so small that many U.S. food makers have to import supplies from overseas, which can raise costs and make monitoring quality more difficult.

Organic food is label-certified by an independent third-party organization and regulated by the U.S. government. The label is intended to ensure that crops and livestock are grown and raised according to certain standards, including generally eschewing synthetic pesticides, hormones, antibiotics and genetically modified seeds.

Mr. Simon said Hain three years ago sought to counter ingredient shortfalls for its Garden of Eatin’ tortilla chips by promising farmers in Texas, Minnesota and elsewhere that it would buy organic blue and yellow corn for up to three to five years.

Other organic-food makers are finding they need to provide farmers with greater assurances—and in some cases financial support—because high land costs make starting an organic farm expensive, and switching to one is onerous. Conventional cropland and dairies can become certified as organic after a one-to-three-year transition period in which farmers generally eschew most pesticides, genetically modified seeds or feed and synthetic fertilizers and hormones.

Organic farmers also often have greater trouble securing bank loans, and organic crops don’t have forward or options markets, which ease the risks of wide swings in input costs and prices for many conventional farmers. While organic produce and livestock can command prices as high as three or four times that of conventional food, farmers generally have to sell their food for conventional prices during the transition.

The price of feed-grade organic corn averaged $13.01 a bushel over the last 90 days, according to Mercaris Inc., a new market-data service and online trading platform for organic and other certified commodities.

Conventional corn for animals, fuel and other uses for May delivery on the Chicago Board of Trade, by contrast, settled at $3.865 a bushel on Thursday. Costs for organic farming generally are sharply higher than conventional farming, partly because organic can require more weeding and other more intensive management.

Nature’s Path, a closely held company based in British Columbia, began wrestling with acute supply shortages in the late 2000s that forced it to import some ingredients on short notice from Sweden and other overseas markets, driving up its costs. It also squeezed margins because the company didn’t pass on those costs to consumers, said Mr. Stephens, who founded Nature’s Path in 1985.

The company’s purchase of Montana farmland last year is likely to become a trend, he said. Nature’s Path plans to dedicate at least $2 million each year to purchase additional conventional farmland that it can then convert to organic production in order to fill a quarter of its grain needs over the next decade. The company contracts with farmers to manage the land, takes one third of the crop at no cost and buys the rest at market price, Mr. Stephens said.

Two years ago, Chipotle, which said it seeks to purchase as many organic ingredients as practical, began providing financial incentives to help farmers of black beans in Oregon and Washington transition from conventional to organic production.

In 2014, the fast-casual chain paid higher-than-conventional prices for about 500,000 pounds of beans grown on farmland shifting to organic—equal to more than 10% of its organic black-bean purchases—even though it wasn’t able to market those to consumers as organic, a spokesman said. In January, the company said it would suspend sales of pork in about a third of its stores after it discovered a supplier wasn’t complying with its animal-welfare standards.

Pete and Gerry’s, a small but fast-growing New Hampshire-based organic egg brand that has struggled to keep up with demand for its eggs, several years ago decided to engage more with suppliers.

In the past four years, it has provided its new organic egg farmers architectural blueprints and lists of contractors and manufacturers for new organic-friendly henhouses, guaranteed their bank loans or directly financed their equipment purchases at zero interest. The company also added an employee who travels throughout the Northeast full time trying to recruit farmers to produce organic eggs for it.

Jesse LaFlamme, one of the company’s founders, said the efforts have helped boost its 80-farmer supplier base by 55 farms since 2009 but cost at least $200,000 each year.

“It’s definitely above and beyond what would be needed for normal commodity agriculture,” he said.

In the late 2000s, Chuck Eggert, founder and CEO of Tualatin, Ore.-based Pacific Foods, worried his organic chicken supply could run short as the organic boxed-soup firm grew 20% yearly on average. Chicken broth accounts for half the company’s sales, and he had become dependent on a handful of organic chicken suppliers on the East and West coasts. So in 2010 he started building the company’s own chicken-raising sheds near headquarters.

He also sought additional conventional farmers who could run organic chicken-raising operations, sweetening the deal by agreeing to pay for all the feed and equipment and assume any losses if they didn’t meet production targets.