Press secretary hasn’t held a formal briefing in months as much news now comes from the president’s Twitter feed.

White House press secretary Sarah Sanders will leave her job at the end of the month to return to her home state of Arkansas, President Trump said Thursday.

“She is a very special person with extraordinary talents, who has done an incredible job! I hope she decides to run for Governor of Arkansas,” Mr. Trump tweeted. 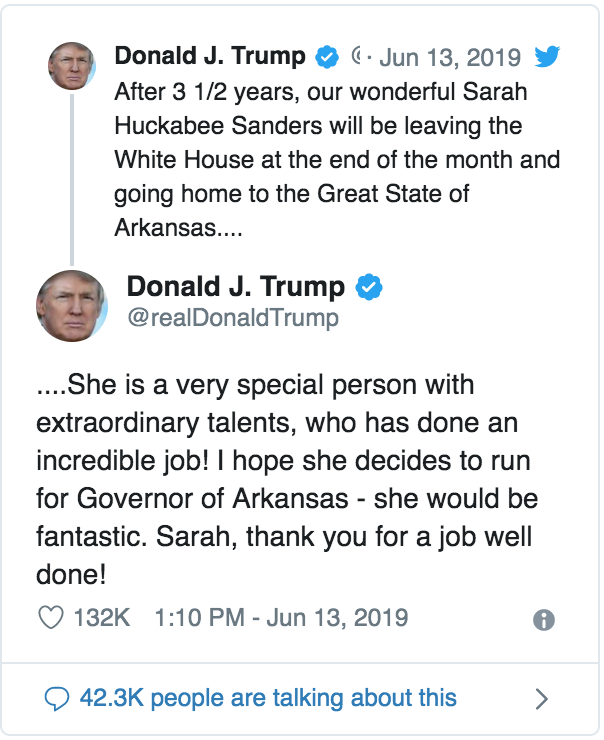 Ms. Sanders assumed the role in July 2017, after Mr. Trump’s first press secretary, Sean Spicer, left the job as the communications office struggled to find its footing. She has been a prominent defender of Mr. Trump, sparring regularly with the press, but has taken on a lower profile after the White House stopped holding regular press briefings.

Most news out of the White House now comes from Mr. Trump’s Twitter feed and his impromptu question-and-answer sessions with reporters. Ms. Sanders hasn’t held a formal briefing in the press room in months.

Mr. Trump interrupted an East Room event Thursday to call Ms. Sanders on stage. Ms. Sanders called the job an honor of a lifetime. “I’ve loved every minute, even the hard minutes,” she said. “It’s truly the most special experience. The only one I can think of that might top it, just a little bit, is the fact that I’m a mom.” 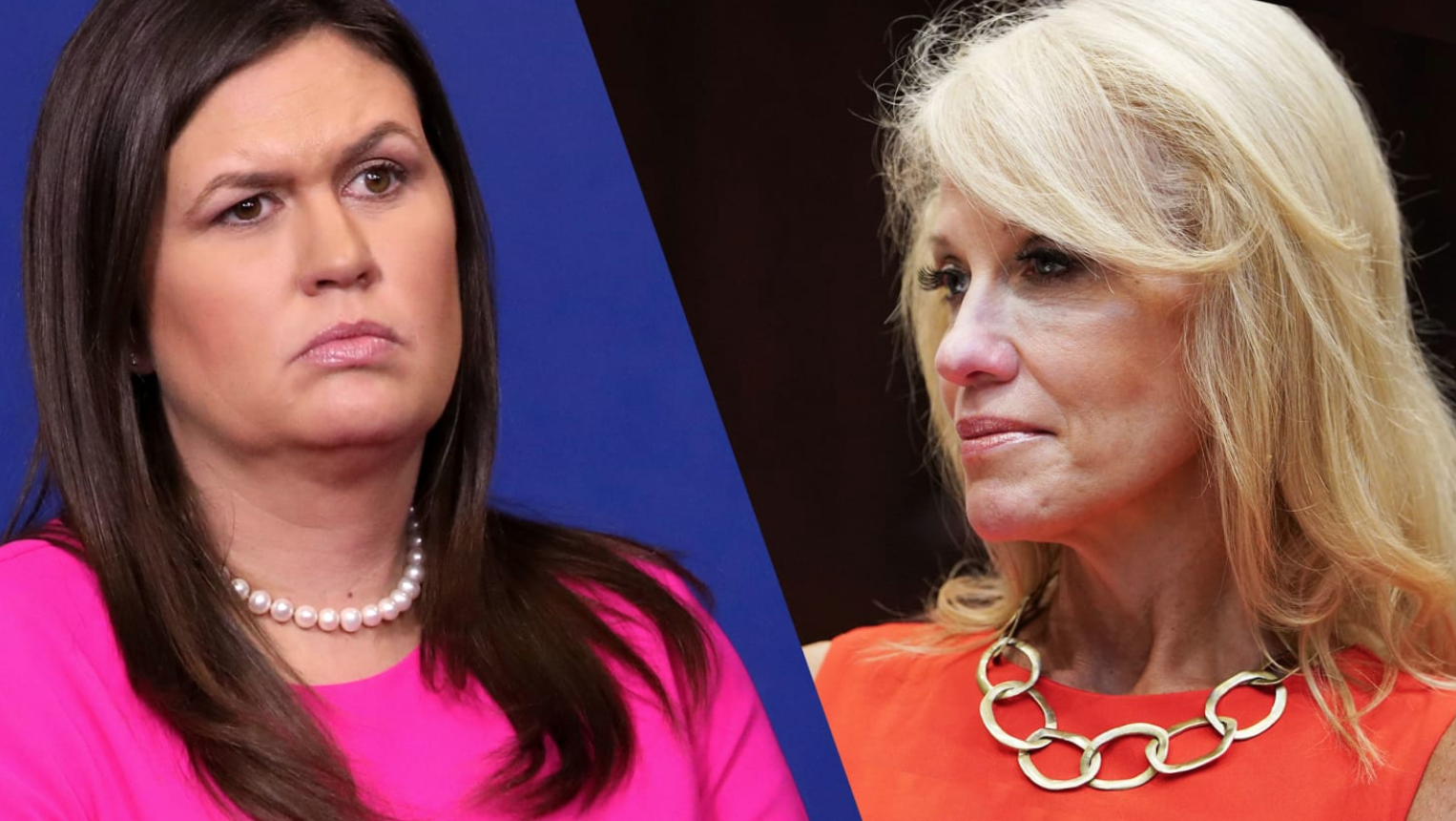 Asked Thursday whether she is considering a run for Arkansas governor, Ms. Sanders told reporters, “I learned a long time ago never to rule anything out.” The current Arkansas governor, Republican Asa Hutchinson, is in his second term and by state law can’t run for a third in 2022.

Ms. Sanders has often been drawn into the controversies surrounding Mr. Trump’s presidency.

She was cited in special counsel Robert Mueller’s Russia investigation over false statements she made in public defending Mr. Trump’s decision to fire Federal Bureau of Investigation Director James Comey in 2017. She told reporters that “countless” FBI agents had told the White House they had lost confidence in Mr. Comey.

In the Mueller report, Ms. Sanders is quoted as telling investigators that the remarks, which weren’t true, were a “slip of the tongue.”

“It was the heat of the moment, meaning that it wasn’t a scripted talking point,” she said in an interview with ABC News following the release of the report.

In response to questions regarding the discrepancy, Ms. Sanders said she wasn’t aware of the development, and that her earlier statement was based on the “best information” she had at the time.

The job weighed heavily on her family. Ms. Sanders often mentioned that she had a Secret Service escort due to harassment she and her family received. In one episode, Ms. Sanders and her family were asked to leave a Lexington, Va., restaurant over the owner’s objection to her patronage.

Ms. Sanders, the daughter of former Arkansas Republican governor and Fox News personality Mike Huckabee, has noted that she is the first mother to hold the position as the president’s top spokesperson. She has spoken about her three young children from the podium and brought them to the White House. She also sought to put a different spin on the briefings, often reading letters from children to Mr. Trump and inviting children to the White House.

Ms. Sanders had been thinking about her exit since the winter, said a person familiar with her thinking. This person said that after more than two years in the White House, she was ready to leave the high-pressure job.

Ms. Sanders signed on as a senior adviser for Mr. Trump’s presidential campaign in 2016, after managing her father’s short-lived challenge for the GOP nomination. Mr. Huckabee dropped out after a disappointing showing in the Iowa caucuses, and he quickly endorsed Mr. Trump.

Ms. Conway, according to a report by the U.S. Office of Special Counsel, a permanent office of investigators and prosecutors, “appeared in her official capacity” to discuss an Alabama special election in two television interviews leading up to the December vote. The report found that she promoted the candidacy of Republican Roy Moore and opposed Democrat Doug Jones, violating the Hatch Act, which restricts political activity by federal employees in their official capacity.

“While the Hatch Act allows federal employees to express their views about candidates and political issues as private citizens, it restricts employees from using their official government positions for partisan political purposes, including by trying to influence partisan elections,” the report said. It added that Ms. Conway, who it said didn’t respond to inquiries, “impermissibly mixed official government business with political views about candidates.”

The consequences for Hatch Act violations can include a civil penalty of as much as $1,000, suspension or termination. The special counsel’s letter to the White House doesn’t recommend a specific penalty.

“Kellyanne Conway did not advocate for or against the election of any particular candidate,” said Hogan Gidley, the White House deputy press secretary. “She simply expressed the president’s obvious position that he have people in the House and Senate who support his agenda. In fact, Kellyanne’s statements actually show her intention and desire to comply with the Hatch Act—as she twice declined to respond to the host’s specific invitation to encourage Alabamans to vote for the Republican.”

In a Nov. 20 interview on Fox News, Ms. Conway said of Mr. Jones: “He’ll be a vote against tax cuts. He’s weak on crime, weak on borders. He’s strong on raising your taxes. He’s terrible for property owners. And Doug Jones is a doctrinaire liberal which is why he’s not saying anything and the media are trying to boost him.”

When the host asked Ms. Conway, “So vote Roy Moore?”, she said: “I’m telling you that we want the votes in the Senate to get this tax bill through.”

The Office of Special Counsel said this interview amounted to advocating against Mr. Jones and an “implied endorsement” of Mr. Moore. In a later CNN interview, on Dec. 6, Ms. Conway “advocated for the defeat of one Senate candidate and the election of another candidate,” the report said.

The OSC began its investigation after the Campaign Legal Center, a nonpartisan Washington group that has been critical of the Trump administration’s approach to ethics, filed complaints about the TV appearances.

“Anything else sets a terrible example,” he said in a statement.

Ms. Conway said during a morning interview with Fox News in February 2017 that people should “go buy Ivanka’s stuff” and that she was giving the fashion line “a free commercial here.” Those remarks were an apparent violation of a rule against federal employees—other than the president and vice president—using their office “for the endorsement of any product, service or enterprise.”

Ms. Conway is a polling expert who became Mr. Trump’s campaign manager in the final months of the 2016 presidential campaign.

She isn’t the only White House officials to run afoul of the Hatch Act.

Last June, the Office of the Special Counsel reprimanded White House social-media director Dan Scavino for what it said was a Hatch Act violation. In that case, Mr. Scavino used Twitter to call for the defeat of Michigan Rep. Justin Amash, a Republican often critical of Mr. Trump.

“Mr. Scavino has been advised that if in the future he engages in prohibited political activity while employed in a position covered by the Hatch Act, we will consider such activity to be a willful and knowing violation of the law,” the counsel’s office wrote, responding to a liberal-funded watchdog that had complained about the tweet.