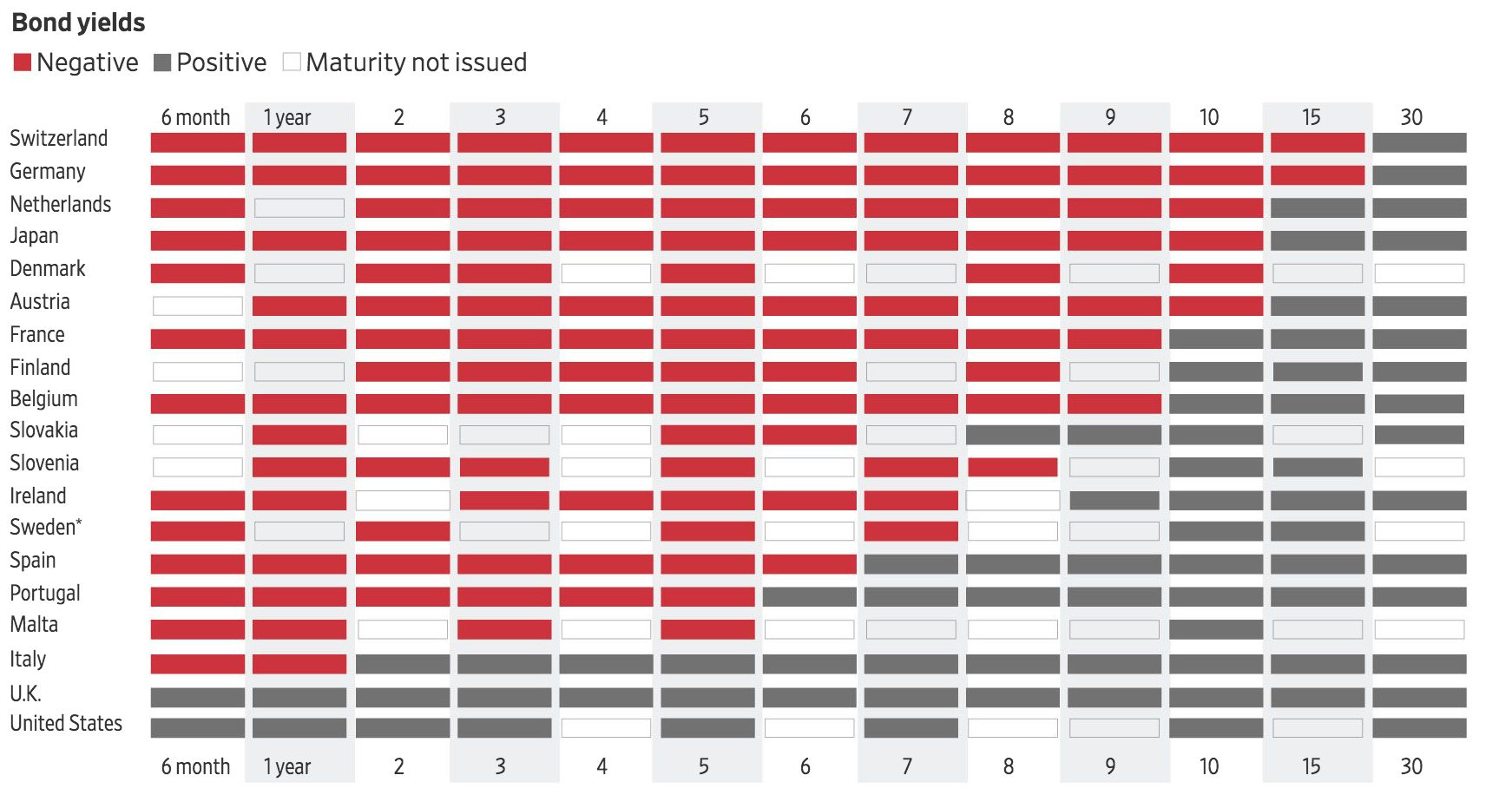 Negative interest rates have spread throughout Europe during the second quarter as growth concerns intensify.

The collapse in bond yields since this spring has been stark, swift and global, upending expectations that the world’s economy would be strong enough to support a return to normal monetary policy after years of easy money.

The drop says investors expect a recession may be looming, and that central banks will have to step in with lower rates to try to forestall it. Ten-year bond yields last week fell to record lows in Germany and France and below 2% in the U.S. for the first time since 2016.

The surprise drop in borrowing costs has spurred a rush by borrowers—home buyers seeking mortgages, corporations issuing bonds—to lock in the low rates.

Yet the signal from the bond market is confounding. Other measures of market sentiment remain buoyant: The S&P 500 on Thursday notched its first record close since April, reflecting expectations that Federal Reserve rate cuts later in 2019 will hold off a downturn. Credit spreads, reflecting the premium investors charge to lend to riskier borrowers, have risen only modestly.

The proximate causes of the bond-yield decline are numerous, interrelated and hard to quantify. The Chinese economy has been slowing, though fears of a crisis there haven’t played out. Expectations of future inflation in developed countries have been plummeting, yet real measures of price change have declined only a little. Tariff threats out of Washington are throwing sand in the gears of global trade, but there are no signs of an outright collapse.

Another factor is a sense among investors that the global economy—hampered by aging demographics and weak productivity—just can’t break out of a decade of tepid expansion and generate significant inflation. Yet even in Europe, where growth has weakened from its already labored pace, it isn’t clear that economic contraction is imminent.

“An aging population means lower potential growth. That in turn boosts savings and depresses investment. Central banks struggle because they can’t really control these factors, and in a way, they can make it worse,” said Silvia Dall’Angelo, senior economist for Hermes Investment Management.

Europe, which faces these demographic challenges more than the U.S., has been ground zero for the fall in bond yields.

There is another quirk at play: a shortage of ultrasafe German government bonds. Known as bunds, they are the benchmark against which all other assets in the region are measured. When investors seek safety, they pile into bunds, driving their prices higher. Yields fall as prices rise.

“There’s definitely a supply-demand crunch,” said Ansgar Nolte, head of portfolio management at Frankfurt-based Berenberg, an investment bank. “You don’t have many opportunities of what to buy if you want to buy something safe,” he said. 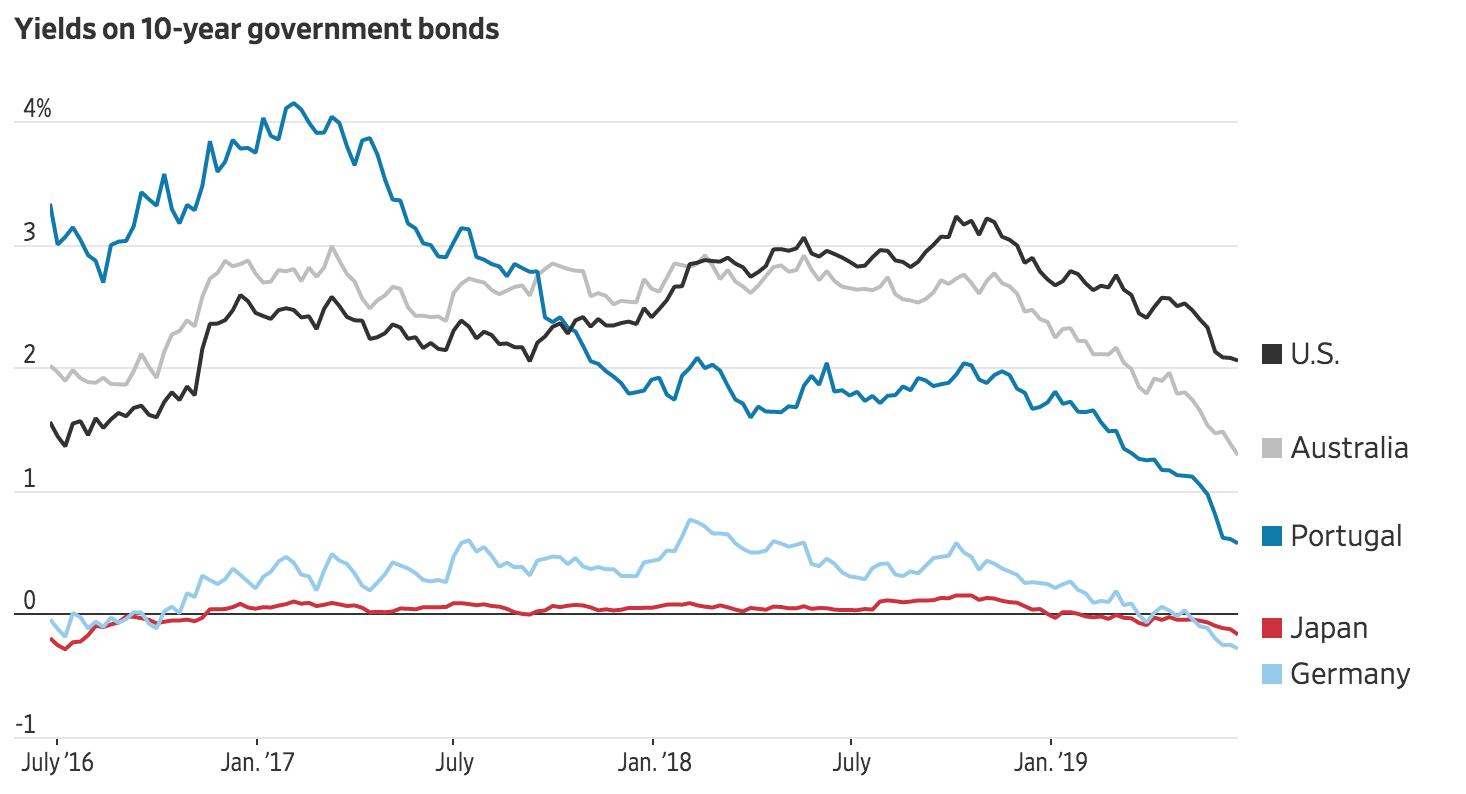 There are roughly €1.5 trillion ($1.7 trillion) of German government debt securities, compared with about $16 trillion from the U.S. federal government. Germany’s frugal government, which runs a budget surplus, has shrunk its debt to 59% of the size of the gross domestic product from 80% at the start of the decade. Over the past few years, the European Central Bank has gobbled up a huge chunk of bunds as part of its quantitative-easing program, reducing the supply available to investors.

Investors have looked to other parts of Europe and the world, helping pull yields lower there. French long-term bonds hit 0% for the first time last week.

Portugal, which came close to going broke in the euro crisis of 2011, is a sudden beneficiary: Ten-year bond yields, which surpassed 18% at the height of the sovereign crisis, hit 0.51% last week, their lowest ever, down by nearly half since mid-May.

The problem is that lower yields aren’t necessarily helping Portugal’s economy. Banks are diverting funds to buy Portuguese government bonds instead of lending.

For big multinational companies and homeowners in the U.S., lower yields can spell opportunity.

Companies that would have issued bonds later this year are doing so now instead “to lock in attractive rates as well as strong demand” from investors, said John Hines, head of global debt syndicate at Wells Fargo & Co.

Homeowners also are rushing out to take advantage of the surprise fall in mortgage rates. The average 30-year mortgage rate has fallen to around 3.8%, from nearly 5% in November, according to Freddie Mac. That has led to a surge in applications for new mortgages, refinancings and home-equity lines, according to the Mortgage Bankers Association. 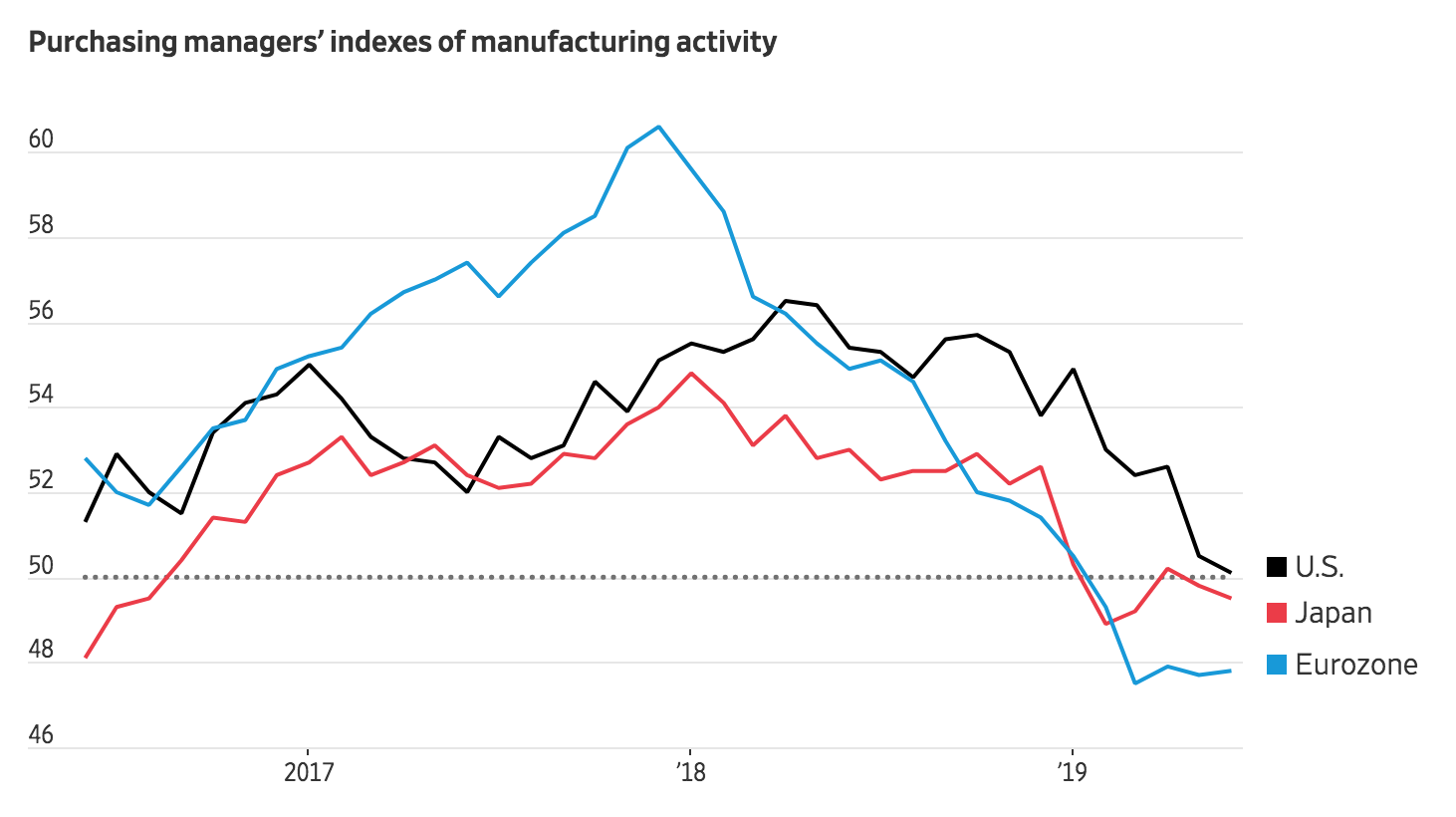 “It’s the beginning of a tsunami” away from safer bonds into these alternative investments, says Mr. Christory.

In Japan, low yields have been a fact of life for decades, a reminder that even supercharged monetary policy has trouble stoking healthy levels of inflation.

To cope, Japanese investors scour the globe for higher-yielding bets. Investments in European bonds almost doubled in the year ended March 2019 from the year before, according to SMBC Nikko Securities’ estimates.

Yet currency-hedging costs this year have made some of these trades less attractive. That has led investors back into Japanese government bonds “by the process of elimination” says Shuichi Osaki, a strategist at Bank of America Merrill Lynch. The 40-year Japanese government bond yields 0.37%, a remarkably low rate for such a long-dated bond.

Some investors worry that low yields are a harbinger of slower growth that stock markets are ignoring.

“The bond market is really saying that it thinks we are facing a significant slowdown or a recession, and the equity market thinks there has been no change at all,” said Keith Guthrie, chief investment officer at Cardano, an investment group that advises or manages £120 billion ($94 billion) in the U.K. and the Netherlands. 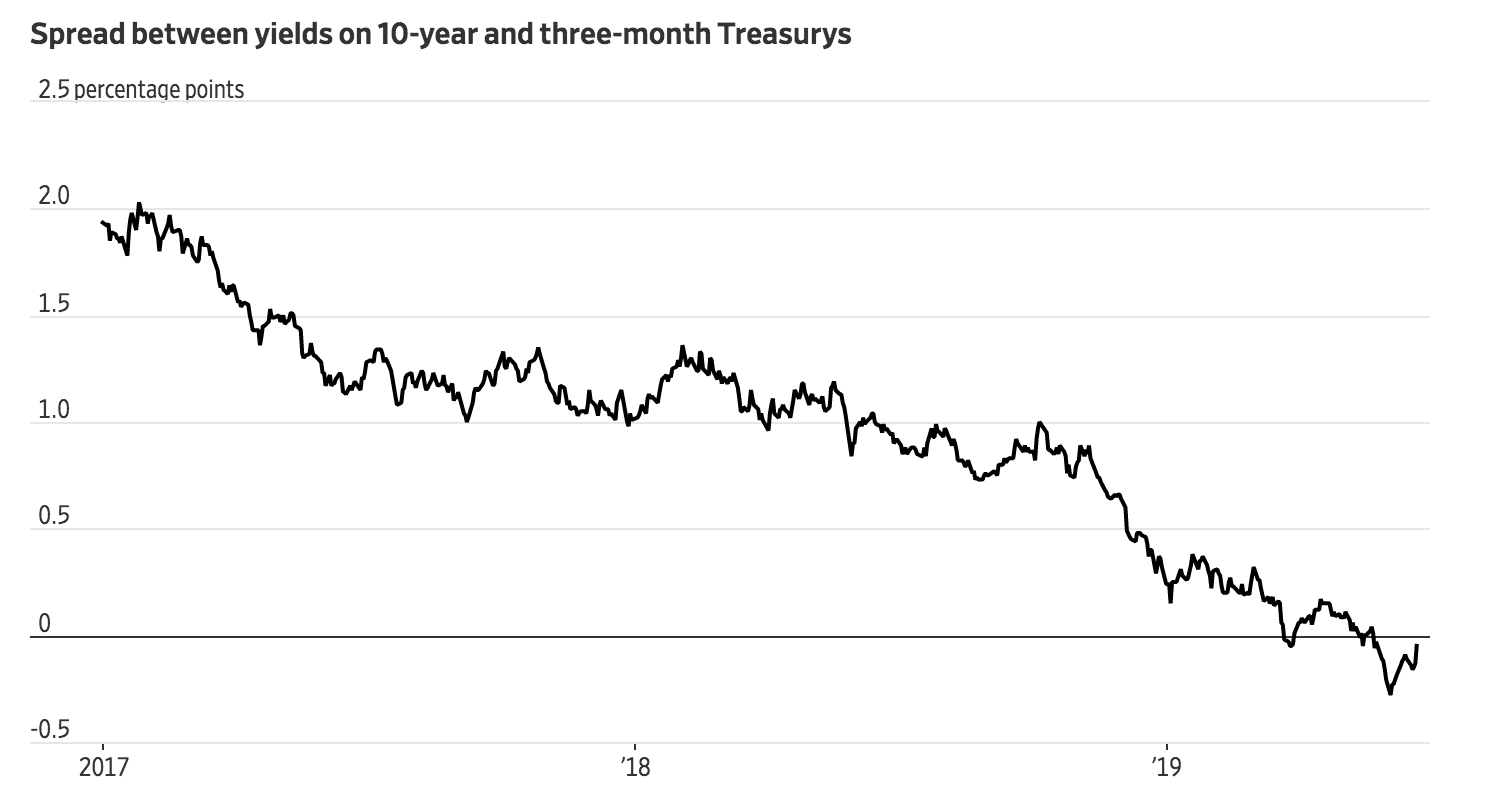 He has piled into bonds in Canada and Australia where there are “over-leveraged local consumers and over-leveraged housing markets,” he said. That means central banks will be under pressure to keep rates low to prevent defaults.