There is a reason James Simons’ RenTec is the world’s best performing hedge fund – it spots trends (even if they are glaringly obvious) well ahead of almost everyone else, and certainly long before the consensus. Global Bank Run Starts With Deutsche Bank As Clients Pull $1 Billion A Day (#GotBitcoin?) 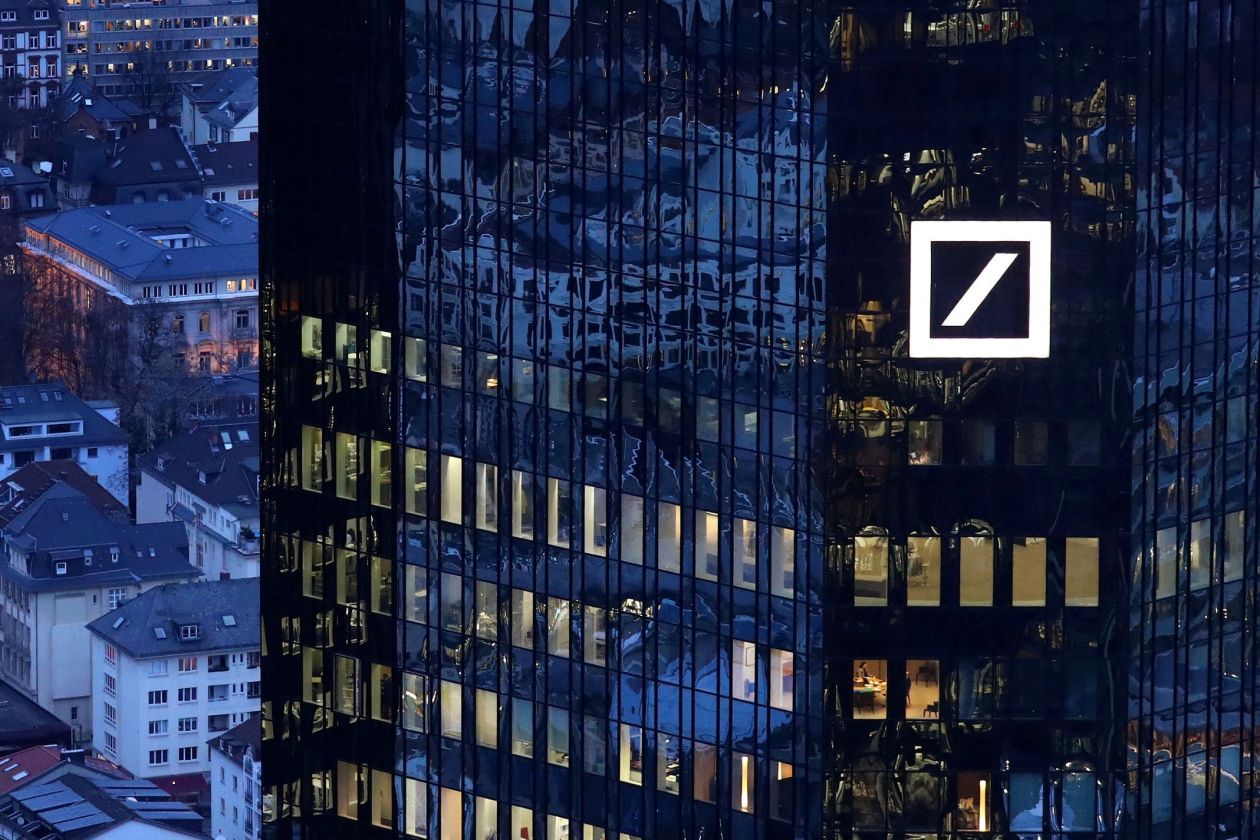 The Frankfurt Headquarters Of Deutsche Bank

That’s what happened with Deutsche Bank, when as we reported two weeks ago, the quant fund pulled its cash from Deutsche Bank as a result of soaring counterparty risk, just days before the full – and to many, devastating – extent of the German lender’s historic restructuring was disclosed, and would result in a bank that is radically different from what Deutsche Bank was previously (see “The Deutsche Bank As You Know It Is No More“).

In any case, now that RenTec is long gone, and questions about the viability of Deutsche Bank are swirling – yes, it won’t be insolvent overnight, but like the world’s biggest melting ice cube, there is simply no equity value there any more – everyone else has decided to cut their counterparty risk with the bank with the €45 trillion in derivatives, and according to Bloomberg Deutsche Bank clients, mostly hedge funds, have started a “bank run” which has culminated with about $1 billion per day being pulled from the bank.

As a result of the modern version of this “bank run”, where it’s not depositors but counterparties that are pulling their liquid exposure from DB on fears another Lehman-style lock up could freeze their funds indefinitely, Deutsche Bank is considering how to transfer some €150 billion ($168 billion) of balances held in it prime-brokerage unit – along with technology and potentially hundreds of staff – to French banking giant BNP Paribas.

One problem, as Bloomberg notes, is that such a forced attempt to change prime-broker counterparties, would be like herding cats, as the clients had already decided they have no intention of sticking with Deutsche Bank, and would certainly prefer to pick their own PB counterparty than be assigned one by the Frankfurt-based bank. Alas, the problem for DB is that with the bank run accelerating, pressure on the bank to complete a deal soon is soaring.

Here are the dynamics in a nutshell, (via Bloomberg): Deutsche Bank CEO Christian Sewing is pulling back from catering to risky hedge-fund clients, i.e. running a prime brokerage, as he attempts to radically overhaul the troubled German lender while BNP CEO Jean-Laurent Bonnafe wants to expand in the industry. A deal of this magnitude would be a stark example of the German firm’s retreat from global investment banking while potentially transforming its French rival from a small player in the so-called prime-brokerage industry to one of Europe’s biggest. 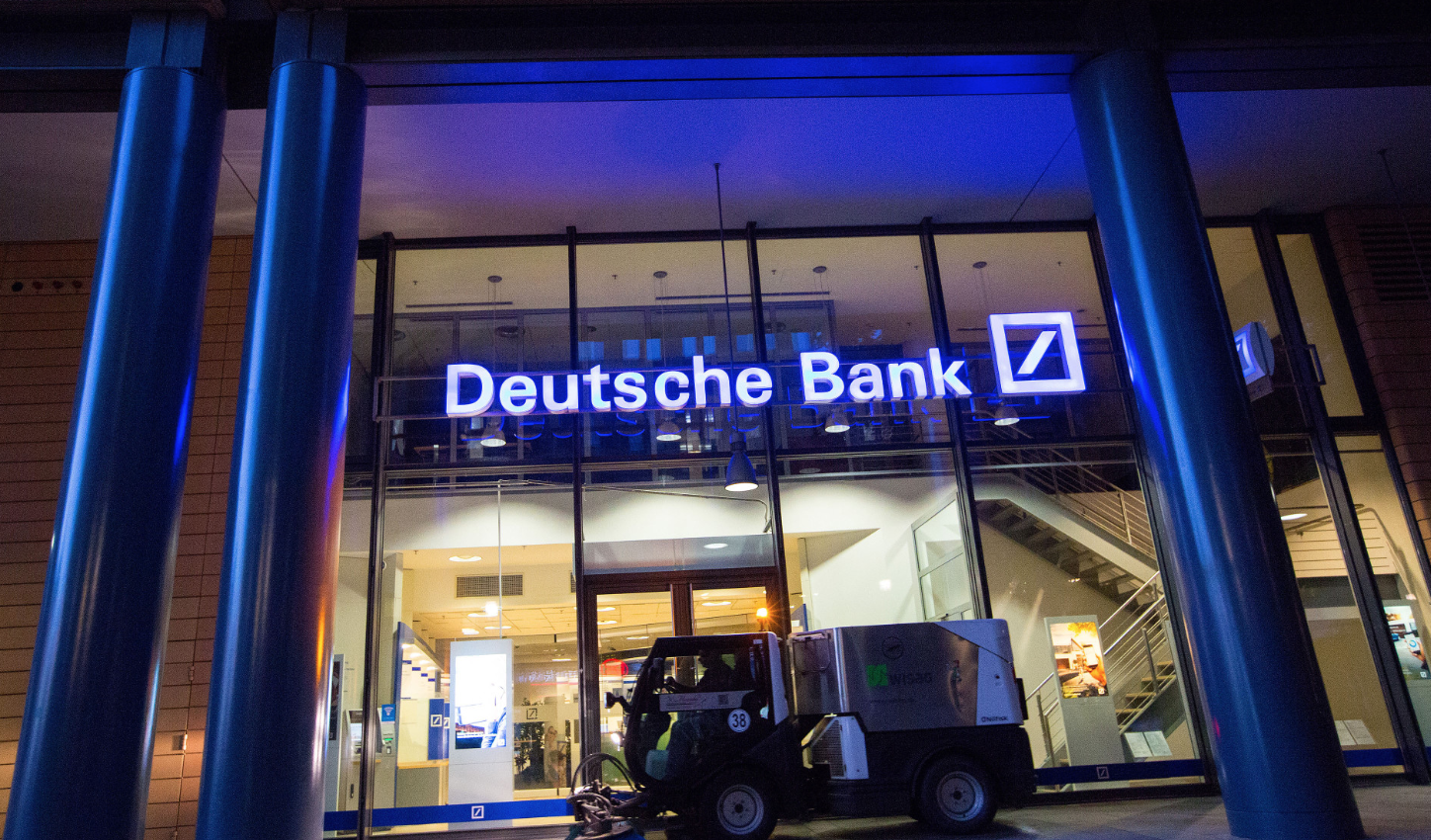 Of course, publicly telegraphing that DB is in dire liquidity straits and needs an in-kind transfer of its prime brokerage book would spark an outright panic, and so instead the story has been spun far more palatably, i.e., “BNP is providing “continuity of service” to Deutsche Bank’s prime-brokerage and electronic-equity clients as the two companies discuss transferring over technology and staff”, according to a July 7 statement. The ultimate goal of the talks is for BNP to take over the vast majority of client balances, which are slightly less than $200 billion currently.

There is just one problem: nothing is preventing those clients who would be forcibly moved from a German banking giant to a French banking giant from redeeming their funds. And that’s just what they are doing. Or rather, nothing is preventing them from moving their exposure for now, which is why they are suddenly scrambling to do it before they are suddenly gated.

Which is why the final shape of the deal remains, pardon the pun, fluid, and it is unclear how it will proceed, facing a multitude of complexities, including departing clients.

In an attempt to stop the bank run, BNP executives are meeting with U.S. hedge-fund clients this week to convince them to stay following similar sit-downs with European funds last week, Bloomberg sources said.

However, if this gambit fails, and hedge funds keep moving their business elsewhere, officials at the German bank may just relegate its assets tied to the prime finance division into the newly formed Capital Release Unit, i.e. the infamous “bad bank” which is winding down unwanted assets totaling 288 billion euros ($324 billion) of leverage exposure, and the prime brokerage is responsible for much of the 170 billion euros of leverage exposure that’s coming from the equities division into the division. 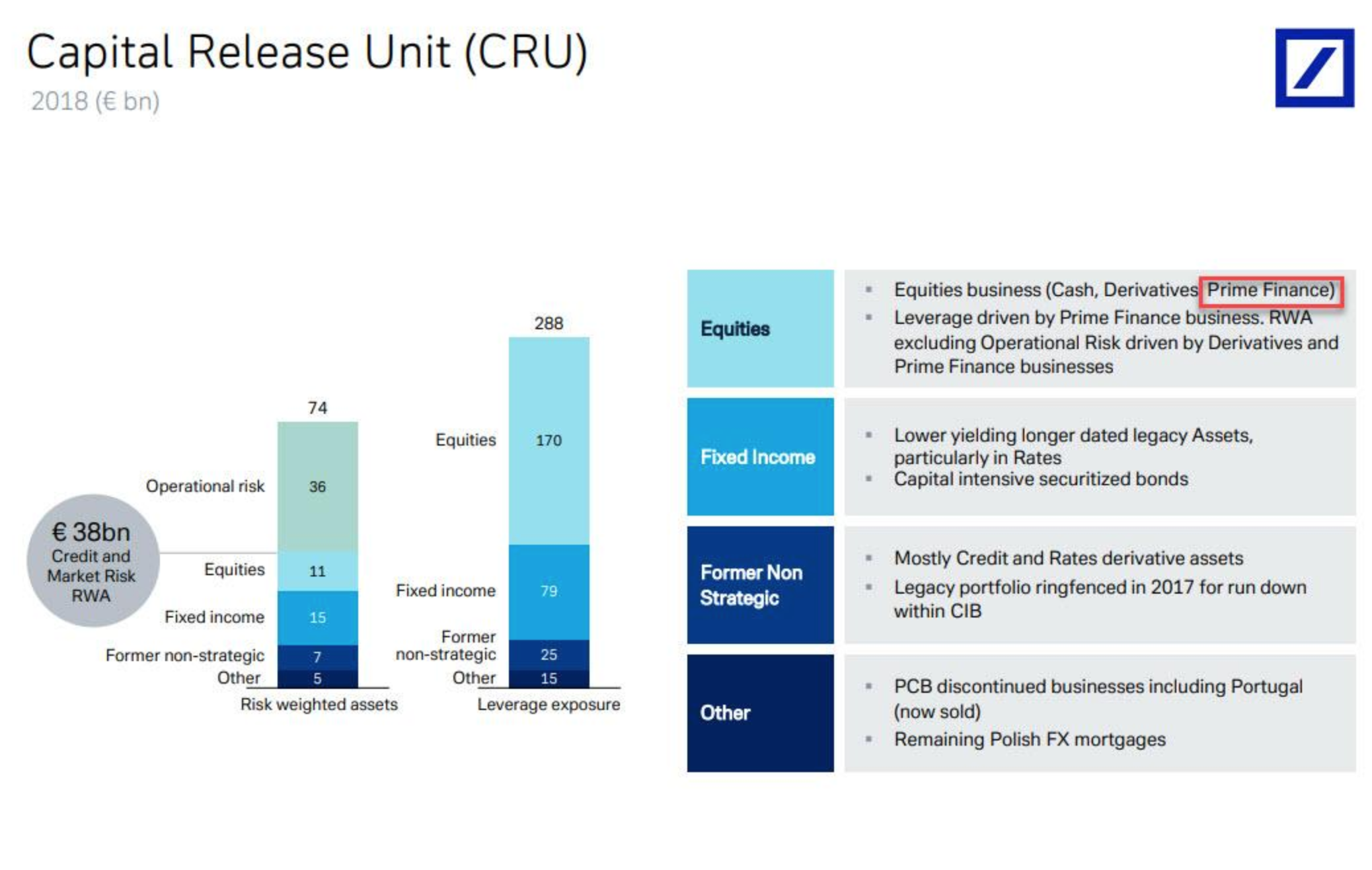 It also means that countless hedge funds are suddenly at risk of being gated on whatever liquid exposure they have toward Deutsche Bank.

To be sure, Deutsche Bank’s hedge fund balances have been declining throughout the year as speculation swirled around Sewing’s intentions for the prime brokerage, but the rate of redemptions was far lower than $1 billion per day. Now that the bank jog has become a bank run, the next question is how much liquidity reserves does DB really have and what happen if hedge funds clients – suddenly spooked they will be the last bagholders standing – pull the remaining €150 billion all at once.

We are confident we will get the answer in a few days if not hours, until then please enjoy this chart which compares DB’s stock decline to that of another bank which was gripped by a historic liquidity run in its last days too… 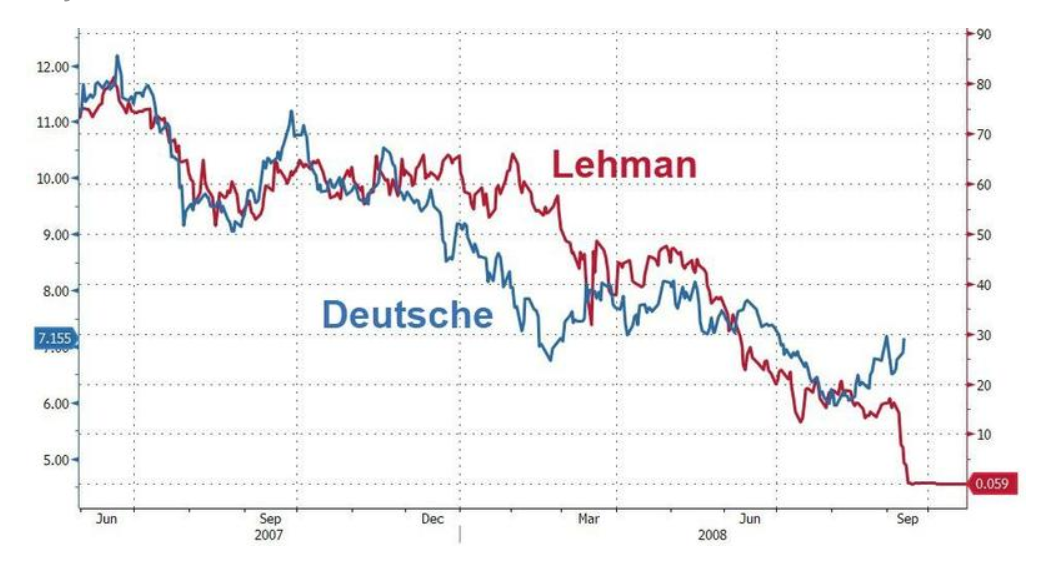 Deutsche Bank AG reported a €3.15 billion ($3.51 billion) net loss in the second quarter, reflecting the pain of a global revamp and a large restructuring charge that wiped out what would have been a modest profit.

Germany’s biggest bank, which is in a prolonged struggle to stabilize its business, said it booked a €3.4 billion restructuring charge in the quarter, higher than the €3 billion it previously expected. Excluding the charge, second-quarter profit was €231 million, slightly higher than its preliminary estimate earlier this month when it revealed its reorganization plans.

Shares in the lender were trading 5% lower in Frankfurt on Wednesday morning, at around €6.77, before recovering partially.

Executives at the German bank say a sweeping overhaul will pay off in coming years through a leaner, more focused lender. The bank said it expects a full-year loss and a revenue drop from 2018.

“This decline is mainly due to our decision to exit substantially all of our equities sales and trading business,” the bank said in a statement.

Deutsche Bank is curtailing its global ambitions through plans to cut 18,000 jobs and largely retreat to its core European market. For years, the lender experienced difficulties competing in core trading businesses, deal advising and other areas where European banks have fallen behind stronger American rivals.

The bank’s challenges are exacerbated by legal and compliance woes and a low-margin retail market in Germany. Chronically low or negative interest rates have weighed heavily on continental lenders.Last quarter’s sharp drop in trading revenue—down 12% across the securities business—and lower deal-advisory fees contributed to a €900 million pretax loss in the investment bank. All but €97 million of that loss came from restructuring charges. Executives said a substantial part of the revenue declines were a natural result of the bank’s narrowing scope of business. Analysts say investors need convincing.

“Excluding transformation charges the bank would be profitable, and in our more stable businesses revenues were flat or growing,” Chief Executive Christian Sewing said in a statement Wednesday.

Still, the transaction-banking unit that finances clients’ trade flows and manages companies’ cash, where Deutsche Bank is spending money to expand, had a disappointingly flat quarter. Its revenue was unchanged when accounting for a one-time boost a year earlier, far from the lofty revenue increases the bank said it would deliver.

As layoffs mount, severance expenses will too. Analysts say Deutsche Bank faces a difficult challenge balancing cost-cutting with the high price of the overhaul, which will strain its capital cushion. Executives say they believe they can shoulder those costs without asking shareholders to pony up more cash.

The bank posted €6.2 billion in net revenue in the second quarter, slightly lower than the €6.3 billion average expected by analysts and down 6% from a year earlier. Investment-banking revenue fell 18% from a year earlier, while revenue at the smaller asset-management unit rose 6%. In the retail banking division, which includes the private-banking business, revenue fell 2%.

The restructuring has led to both planned and unplanned departures across businesses, which started well before the bank’s formal unveiling of its reorganization. More than 900 people have received notice they are being fired or their jobs are being cut, the bank said Wednesday.

The bank has reorganized its management under Mr. Sewing. Several top executives, including the head of the investment bank, are leaving and the CEO is taking over supervision of that division, which is the bank’s most important revenue engine.

The lender created a so-called bad-bank division, called the Capital Release Unit, to sell or wind down nearly €300 billion in assets including derivatives contracts that can’t be disposed of easily. The process is expected to take several years.

As part of the shrinkage, Deutsche Bank is dismantling chunks of its Wall Street operations, built over more than 20 years. It is peddling portfolios of equity derivatives and other holdings to rival banks and said it is on track to sell big portions of an electronic-trading and prime-brokerage business serving hedge funds to BNP Paribas SA .

Calling the moves a “fundamental rebuilding of Deutsche Bank,” Mr. Sewing promised to shed businesses where the lender has failed to compete, including equities trading. Investors have called for the bank to lop off money-losing operations after years of persistent share declines and strategic rethinking.