The price of bitcoin rose above $9,000, extending a rebound that has made cryptocurrencies far outperform traditional asset classes this year.

Bitcoin climbed to $9,381.82 over the weekend, a 13-month high, according to research site CoinDesk. While stocks, bonds, gold and oil are all up this year, bitcoin’s rally trounces them all.

Facebook has signed up more than a dozen companies including Visa Inc., Mastercard Inc., PayPal Holdings Inc. and Uber Technologies Inc. to back its cryptocurrency, The Wall Street Journal reported on Friday. The digital coin, called Libra, is set to launch next year.

Though bitcoin and the underlying blockchain technology are hardly used for payments, Facebook is betting that its giant social network with billions of users will gravitate toward its crypto-based payments system. And investors say a company of Facebook’s stature using a cryptocurrency gives the industry wider appeal.

“When big, important companies get involved, crypto enters the zeitgeist in a different way,” said Rayne Steinberg, chief executive and co-founder at Arca, an asset-management firm that invests in digital currencies.

He said the U.S.-China trade tensions have been a positive catalyst for bitcoin. Bitcoin was formed about a decade ago as a decentralized, autonomous network which isn’t controlled by any individual, company or government. That has made it particularly attractive to some investors who have grown disenchanted with the world’s two largest economies engaging in a bitter trade dispute.

“In this digital world where you have an unseizable, unmanipulatable, uninflatable asset that acts as a store of value, there is going to be a demand for that,” Mr. Steinberg said.

Additionally, bitcoin has separated itself from most other asset classes on a performance basis. The S&P 500 is up 15% this year, crude-oil futures have gained 16% and gold futures are up 4.8%. Bitcoin, meanwhile, is up 154%, although it is still well below its all-time high near $20,000.

Hacks, scammers and fraud remain key concerns. But there are bright spots. In a research report earlier this month, Anthony Pompliano, a founding partner at asset-management firm Morgan Creek Digital, said bitcoin was acting as a hedge against global instability, citing how bitcoin moved differently to most other asset classes.

SFOX, an institutional crypto prime dealer, found that there was “a near perfect negative correlation” between the S&P 500 and bitcoin in May after China announced plans to raise tariffs on $60 billion of U.S. goods.

“This is the core argument for why institutional investors should have exposure to the cryptocurrency,” Mr. Pompliano said. Bitcoin Tops $9,000 As

Why Bitcoin Hasn’t Gone To Zero And Is Now Knocking On The Door Of $10,000

The world’s No. 1 cryptocurrency is on fire, with a price approaching $10,000, pushing the digital asset near its highest level in more than 14 months, according to MarketWatch data provided by CoinDesk. 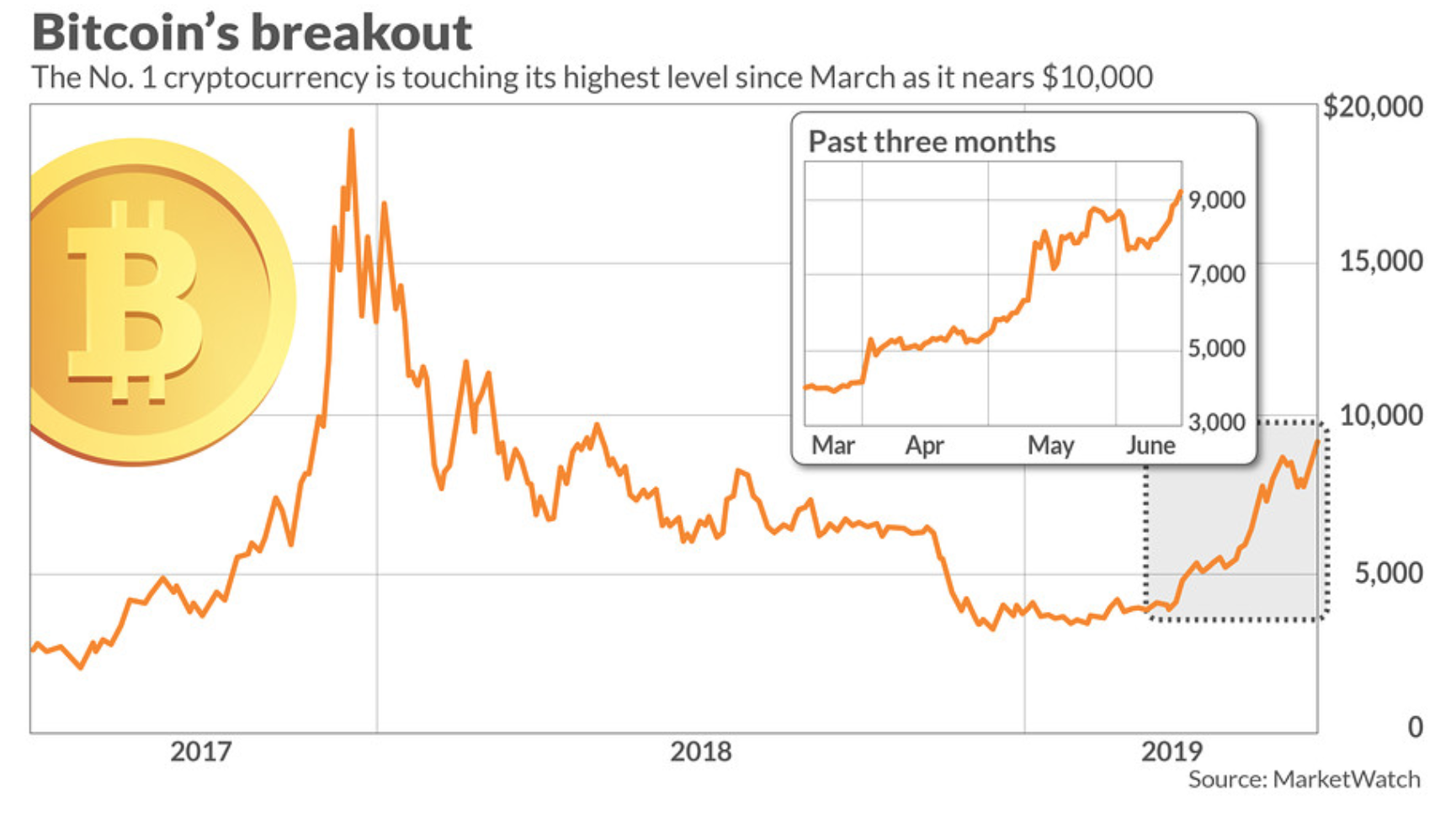 Moreover, bitcoin trading on the CME Group’s futures exchange for June delivery was at $9,265, up 9.7% on the day, representing a 153% surge for bitcoin futures for the year to date.

This compares with a gain of 12% for the Dow Jones Industrial Average a 15% advance for the S&P 500 index and a more than 18.3% return for the Nasdaq Composite Index  according to FactSet data.

Here Are A Few Theories About Why Bitcoin Has Been Zooming Higher Lately:

Institutions Not Individual Investors Are Bullish

Wall Street has taken a hard look at cryptocurrencies and the digital-ledger technology that underpins most assets, blockchain, and has decided to take a chance.

JPMorgan Chase & Co.  led by one of bitcoin’s more outspoken critics, announced in February JPM Coin, designed as a way to handle digital settlements. A number of other banks, including UBS Group, have also announced efforts to use blockchain to assist in international settlements.

“The first time Bitcoin crossed the $9,000 mark was in November 2017. That price movement was largely driven by international retail demand – South Korea, for example – in addition to hype around initial coin offerings. This time around, however, we believe that institutional money is playing a much bigger role than it did in 2017, which is evidenced by CME’s record of futures volumes.”

Trading of bitcoin has been climbing, as reflected in futures activity on CME Group. Over the past several weeks bitcoin futures trading activity, gauged by its moving average since inception of bitcoin trading is at a record. Trading on the CME made its debut in late December, while another futures platform CBOE Futures Exchange, which kicked of bitcoin trading on Dec. 17, will see its June contract mark the end of its foray into bitcoin futures.

The social-media giant will unveil a new crypto-payment platform that could facilitate digital payments not just on Facebook’s site but anywhere on the internet. Participants reportedly include an array of heavyweight backers, like Mastercard Inc. PayPal Holdings Inc. UberTechnologies and Visa Inc.

Check Out: ‘If You’re Not A Billionaire’ In 10 Years ‘It’s Your Own Fault,’ Says 20-Year-Old Bitcoin Tycoon

Shares of MoneyGram International Inc.  soared late-Monday after Ripple Inc., a blockchain startup behind the XRP coin agreed to invest up to $50 million in the money-transfer company, marking another powerful event for cyptos.