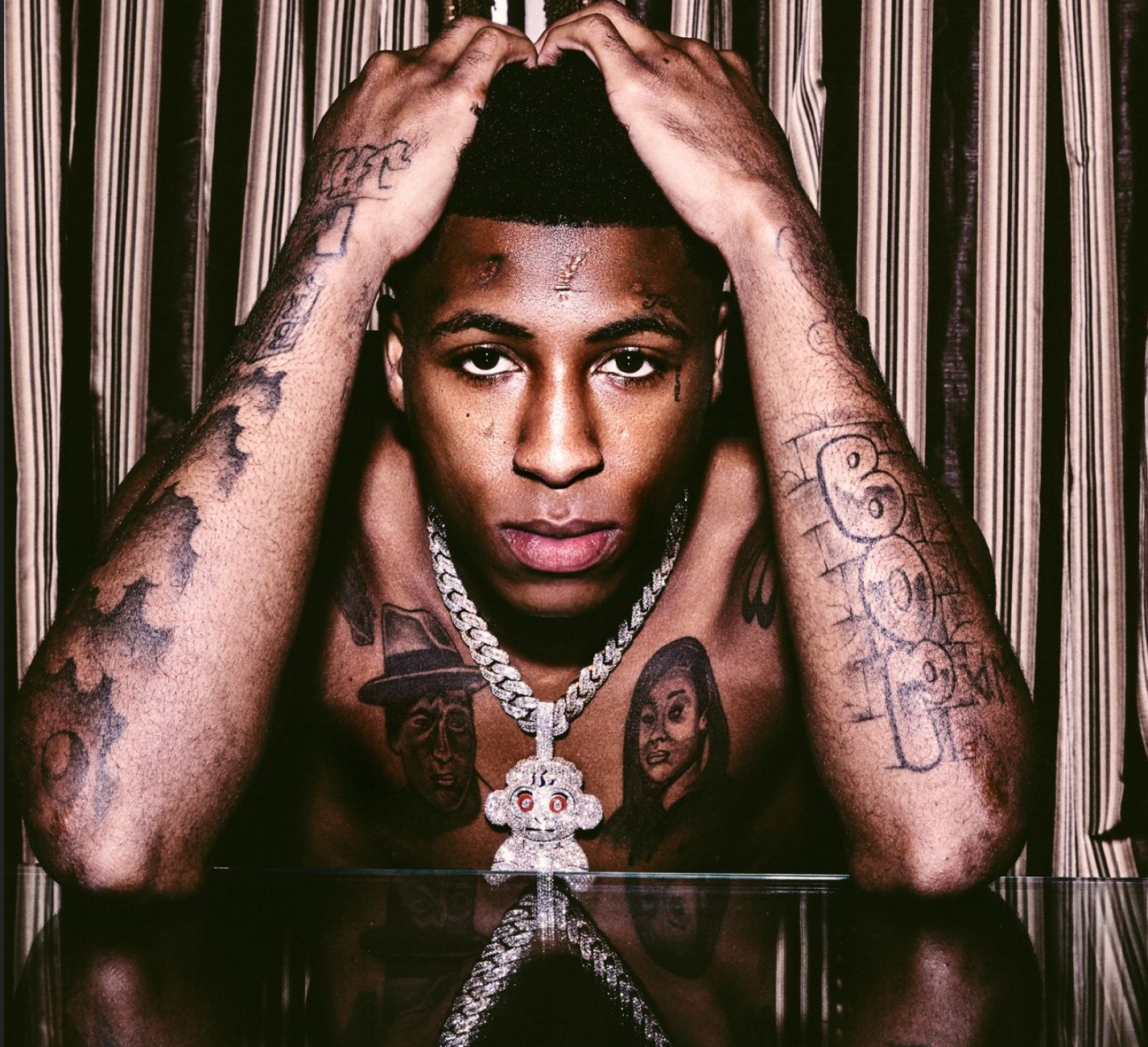 “Youngboy Never Broke Again” Performs In Dallas Last Year. The Rapper Releases Material At A Frenetic Pace, And Often Posts It On Youtube First—By Himself.

YouTube’s biggest music act last year was a rapper called YoungBoy Never Broke Again. The splintering of listeners by platform means that many people don’t know who he is.

YoungBoy has posted 11 music videos that have each racked up more than 100 million YouTube views in the past two years. Born Kentrell DeSean Gaulden in Baton Rouge, La., he has built an ardent following with a reflective and melancholic style of rap. He releases material at a frenetic pace, and often posts it on YouTube first—by himself. His music videos, album songs and fan-made videos made him the site’s most-viewed artist in the U.S. in 2019.

For kids using YouTube, YoungBoy is “like a movie star, where they want to know what he’s feeling at that moment,” says Eli Piccarreta, vice president of artists & repertoire at APG, part of Atlantic Records. He discovered YoungBoy on YouTube in 2016 and signed the rapper-singer, who wasn’t available for an interview for this article, to a partnership.

Yet YoungBoy’s dominance doesn’t extend across all of music’s increasingly fragmented platforms: On Spotify, the biggest audiostreaming service by subscribers globally, YoungBoy didn’t even rank among the top five stars of the year. That status went to Post Malone, Drake, Billie Eilish, Ariana Grande and Khalid.

The schism reflects a wider splintering in the music industry, as the platform people listen to increasingly determines what they think is popular. With an exploding number of ways to get music, the shared cultural experience of hearing a big song everywhere is becoming more rare: A hot artist in one bubble can barely register in another.

“Niche is the new mainstream,” says Mark Mulligan, a music-industry analyst at MIDiA Research, who has studied fragmentation.

The nichification of the music industry has broad implications for pop music: It’s harder to define what’s big and important. And as pop-music stardom downsizes, stars such as Billie Eilish no longer have the same imperative to offer broad-appeal, instantly memorable choruses designed to draw in all music listeners.

Megastars like Taylor Swift, Beyoncé and Jennifer Lopez still dominate stadium shows and events like the Super Bowl, but they are competing with an array of artists like YoungBoy who rule specific fiefdoms of the music industry—which are increasingly defined by the platforms to which different audiences are drawn.

“‘Mainstream’ doesn’t mean being everywhere in the way it used to,” says Mr. Mulligan. “It just means you’ve saturated your target niche.”

YoungBoy’s popularity on YouTube reflects both that platform’s fan base and his own efforts. The free site is especially appealing to young fans who don’t yet have credit cards—or are simply reluctant to pay—for subscription accounts on places like Spotify. It’s also a visual medium, because people often watch as well as listen. YoungBoy caters to that by releasing many videos along with his songs.

Spotify, by contrast, gets most of its revenue from subscriptions. It does have a free service (and YouTube does have a pay service) but even Spotify’s free offering requires users to sign up for an account, which some listeners say creates a hassle they opt to avoid on YouTube.

It’s a fragmentation that exists across the music world. On Apple Music, the second-biggest audiostreaming service by subscribers after Spotify, the top artist globally in 2019 was Drake. (YoungBoy was third.) On SoundCloud, a music-streaming service, the most popular artist globally for two years running has been the late rapper Juice WRLD. 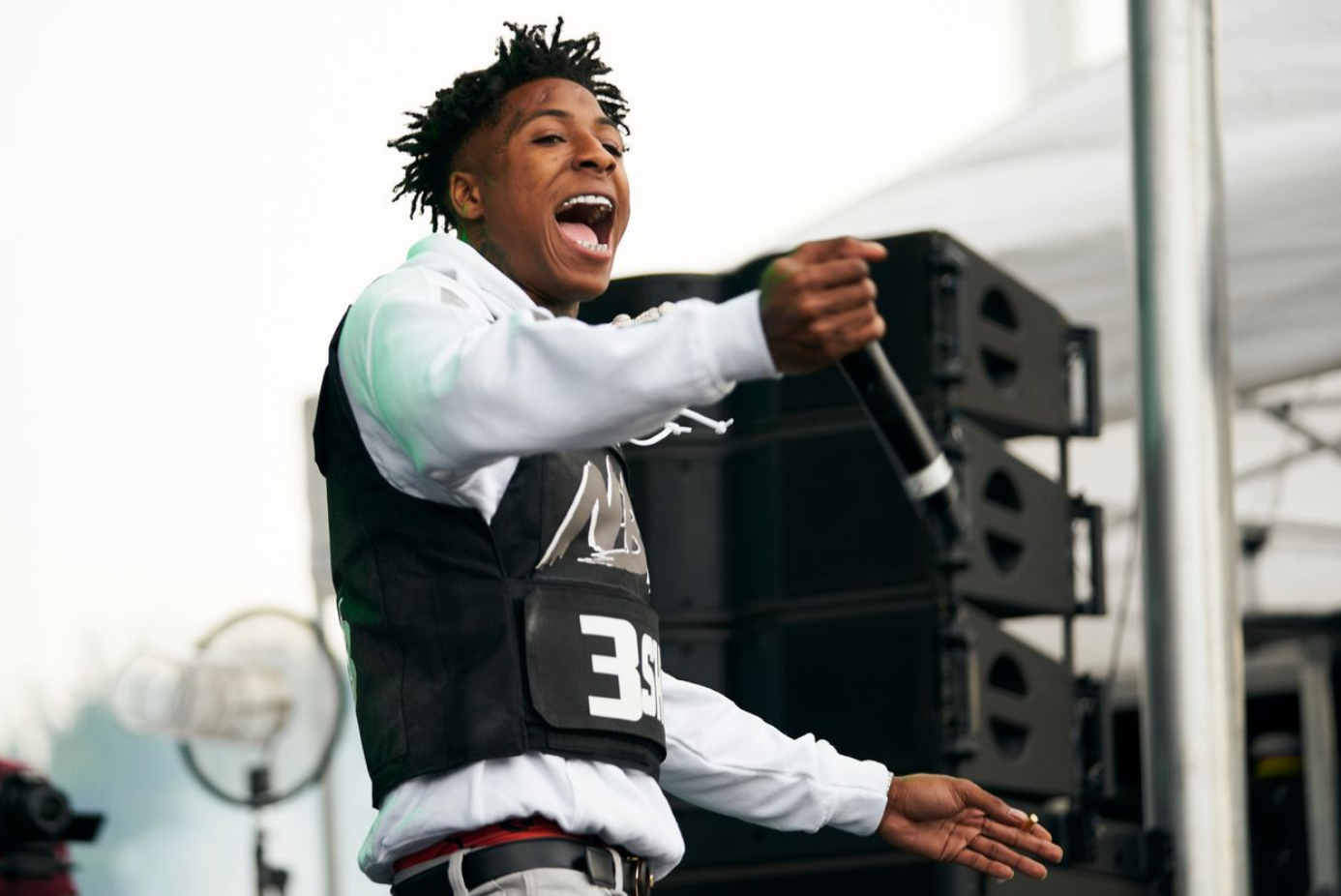 Meanwhile, on U.S. radio last year, the biggest song was by rockers Panic! At The Disco. And on the concert circuit, the star with the highest-grossing global tour was Pink, according to Pollstar, who didn’t rank in the top five of Spotify or YouTube.

Music fan Dawn Eckert, 38, who lives near Philadelphia, says she knows Billie Eilish swept the Grammys but “I couldn’t tell you one song.” By contrast, she remembers when Nirvana exploded in the early 1990s; everyone knew “Smells Like Teen Spirit,” she says. “You couldn’t get away from it.”

There can be big variations between platforms in genres, not just artists. Latin stars Ozuna and Bad Bunny, for instance, are typically more popular on YouTube than on Spotify, Apple Music or Amazon Prime Music. Roughly 15% of all U.S. video streaming comes from Latin music, even though the genre accounts for only 5% of all U.S. music listening, Nielsen says.

Age drives other divides. Before achieving global fame with “Old Town Road,” Lil Nas X gained traction among younger fans on the free app TikTok but was largely unknown more broadly. And none of the five most-popular artists last year on the small, youth-focused streaming service Audiomack—which averages around 14 million monthly users, half of them in the U.S.—appears among Spotify’s top five: YoungBoy Never Broke Again, Kevin Gates, Rod Wave, YNW Melly and Young Thug. Rod Wave, for instance, gets roughly 2 million to 4 million plays a day, Audiomack says—a sizable sum for an artist many Americans don’t know. Roughly 90% of Audiomack’s audience is under 34 years old.

Ashley Sapiens, a 14-year-old high-school freshman in Los Angeles, likes R&B and hip-hop and says she uses YouTube to listen to music while doing homework because she likes how it recommends popular songs. It’s easier to know “what everyone else is listening to” on YouTube, she says. She finds Spotify’s free service “kind of irritating” because of its ads and songs she doesn’t want to hear.

Last summer, Ms. Sapiens discovered YoungBoy when she heard his song “No Mentions” in a TikTok dance video. She looked it up on YouTube and now YoungBoy is one of her favorite hip-hop acts; she follows him on Instagram.

The platform where artists’ fanbases reside can shape the way they make money. Acts that are popular on Spotify or Apple Music tend to have bigger national profiles, partly because these services historically have communicated more closely with labels on new releases and promotion. Artists big on YouTube, whose video content generates smaller royalties for record labels, often have comparatively younger and niche audiences—and yet can in some cases sell more tickets than higher-profile artists on tour. 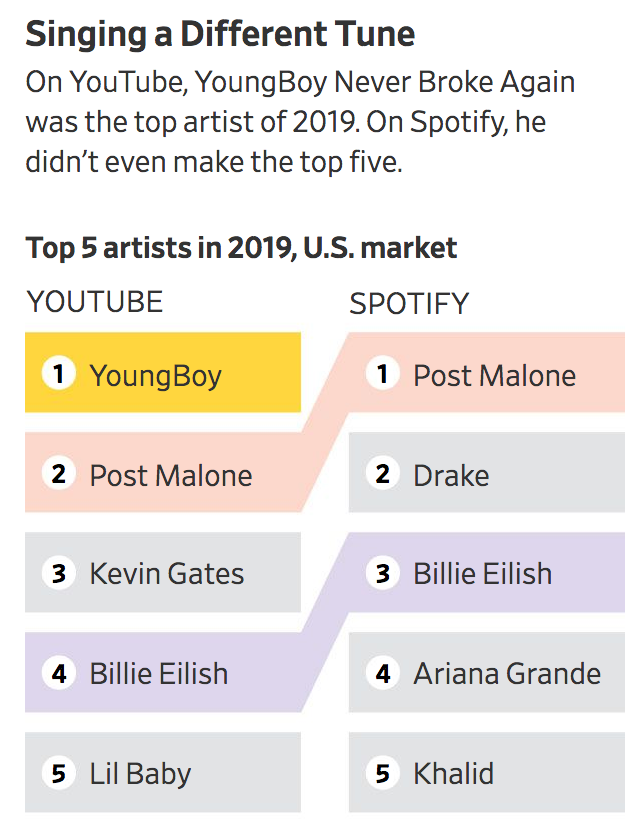 In general, music stars make money from platforms like YouTube and Spotify through the royalties their songs and videos generate. In addition, the stars leverage their popularity by touring and selling merchandise. Artists who sign deals or partnerships with record labels also get money from that.

YouTube’s reach dwarfs that of other music platforms, which helps stars like YoungBoy to go viral and quickly connect with many potential fans. YouTube has over 2 billion monthly, logged-in users—whether music-related or otherwise, it says. Spotify, by contrast, has 271 million monthly active users globally.

This year, Billboard started including YouTube views in its flagship album chart ranking, but such views still count for less than a stream by a Spotify or Apple Music subscriber. Since the chart tries to approximate the equivalent of an album sale, the logic behind the current system is that fans looking up videos on YouTube aren’t committing themselves as fully as someone who pays for streaming.

Some people disagree. “The situation is putting at a disadvantage artists that might appeal to a younger demographic, or a lower-income demographic,” says Dave Macli, co-founder and CEO of Audiomack. “What you’re saying is, if you don’t have money and aren’t in the system, then your stream counts less.”

After flying under the radar for years, YoungBoy is making more inroads into the mainstream. Last fall, one of his albums topped the Billboard 200 album chart for the first time. He teamed up with the late Juice WRLD for “Bandit,” a song that became a top 10 hit in October. On Friday, he releases his latest project.

At the same time, Mr. Piccarreta says, there’s value in moving slowly and letting YoungBoy operate relatively independently. That YoungBoy isn’t a household name has probably helped him cultivate a more direct relationship with fans and create a path to a durable long-term career, he says.

“Most of the time, he is the one hitting upload himself on the computer,” Mr. Piccarreta adds. “He thinks of YouTube as his business.”