California’s Privileged Use Private Fire Departments To Save Their Homes (#GotBitcoin?)

When the Woolsey fire swept into the exclusive neighborhood of Bell Canyon, resident Yen Hsieh grabbed her late music teacher’s 200-year-old cello, some belongings and her son’s betta fish Sparky and fled, not sure whether her home would be destroyed.

More than 30 homes in the gated Ventura County community were lost, but Hsieh’s survived. Bell Canyon was protected by both county firefighters and a private crew covered by her homeowner’s insurance policy.

Hsieh said it’s not clear which of the firefighters — private or publicly funded — were responsible for saving her home, but she’s grateful.

“I just want to hug every one of them,” she said.

With California experiencing two years of unprecedented wildfires that have left more than 20,000 homes destroyed and scores dead, the private firefighting business is booming. These brigades work independently from county firefighters; their job is to protect specific homes under contract with insurance companies.

Their work can vary from pushing back flames as they approach properties to reaching the site before the blaze arrives and spraying homes with fire retardant.

But the private forces have generated complaints from some fire departments, who say they don’t always coordinate with local crews and amount to one more worry as they try to evacuate residents and battle the blaze.

“From the standpoint of first responders, they are not viewed as assets to be deployed. They’re viewed as a responsibility,” said Carroll Wills, communications director for California Professional Firefighters, a labor union representing rank-and-file firefighters in the state.

What began more than a decade ago as a white-glove service for homeowners in well-to-do neighborhoods has expanded in recent years as the wildfire danger has increased, said Michael Barry, a spokesman for the Insurance Information Institute, a not-for-profit organization that educates the public about the insurance industry.

Private firefighting crews that work on behalf of insurance companies, such as Chubb and USAA, say they provide an additional layer of protection for homeowners who opt into the service as part of their insurance policies. The policies range in cost from several thousand to tens of thousands of dollars annually, depending on the homes’ insured value and other factors. 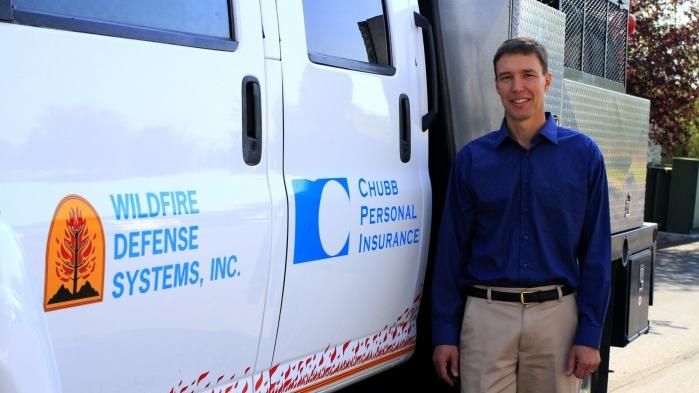 Roughly a dozen insurance companies contract with Wildfire Defense Systems to protect their insured properties. When the Woolsey, Hill and Camp fires broke out this month, the firm mobilized a battalion that included 53 firetrucks, more than 100 firefighters and 50 workers in supporting roles, said David Torgerson, Wildfire’s president.

The company operates in 18 states, and it’s a familiar presence in California. Over the last 11 years, it has fought more than 100 fires statewide, making up a third of its total responses.

During a wildfire, the private crews might not visit every home insured under the program but base their location decisions on where flames are advancing and where homes have a high likelihood of being destroyed without their assistance.

Wildfire Defense Systems doesn’t provide coverage for individual landowners who don’t have the service built into their insurance policies. However, homeowners can call on other private fleets to protect their homes — a service that comes with a hefty cost but is relatively uncommon. Those arrangements make up roughly 5% of the industry, Torgerson said.

Kim Kardashian went on Instragram to thank firefighters for saving her Hidden Hills estate and told Ellen DeGeneres in an interview that she hired a private crew to protect her property.

“Our house is right on the end of a big park, so the whole park had caught fire and so if our house went, then every other house would go,” she said. “I don’t take that for granted, and that was such a blessing that we were able to do that.”

Crews deployed by insurance companies don’t exclusively serve wealthy homeowners but also protect middle-class homes in rural areas, like those that were threatened during last year’s wine country fires and the Camp fire in Butte County this month, Torgerson said.

It’s unclear how many private firefighting crews were battling the Woolsey blaze, which burned through some of Southern California’s more affluent areas including Malibu, Calabasas and Westlake Village.

“We’re responding to addresses,” Torgerson said. “We’re not responding based on home values.”

For insurance officials, the benefits are obvious because it’s less expensive to dispatch private firefighters to save a property than it would be to replace an entire house and everything in it.

The California Department of Insurance reported that claims from the wildfires that ravaged California during the tail end of 2017 reached nearly $12 billion, making last year’s fire season the costliest on record. Numbers for the current year haven’t been tallied, but analysts say the situation doesn’t appear to be improving.

The Camp fire decimated the town of Paradise, turning more than 13,000 homes to rubble. In Los Angeles and Ventura counties, the Woolsey fire destroyed 1,500 structures, including many homes.

“It’s clear, unfortunately, that just when I don’t think it can get any worse in terms of structures destroyed, it seems to get a lot worse,” said Chris Anthony, an assistant chief with the California Department of Forestry and Fire Protection. “If these insurance companies are trying to mitigate risk and liability, the trends are pretty clear the numbers are going to rise as fires get worse. From an economic standpoint, it makes total sense what they’re trying to accomplish.”

Chubb has been working with Wildfire Defense Systems since 2008, offering the service as part of its standard homeowner’s policy for properties in wildfire-exposed areas. Roughly 50,000 clients are enrolled across the country, said Frances O’Brien, senior vice president of the company’s North America Personal Risk Services branch.

If a private fleet reaches an insured home before it’s damaged, their approach is largely preventive.

“They look for anything around the property that could fuel a fire, like stacked wood or unmanaged vegetation,” O’Brien said. 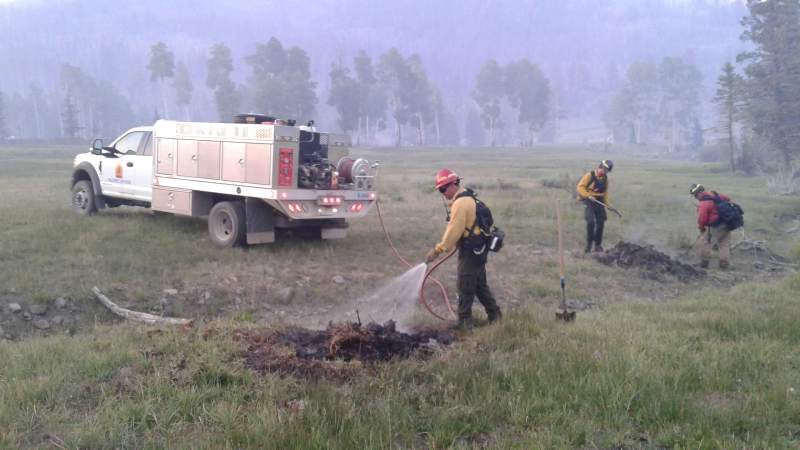 “Cushions on patio furniture can be very flammable.”

Crews will rake vegetation around the home, close windows and vents, spray retardant — the same pink-hued substance that’s dropped out of airplanes during wildfires — on brush and, in some cases, spray a home with a gel-like substance that protects it from falling embers. The fleet’s trucks also store water for dousing flames or putting out hot spots around homes.

Ventura County Fire Capt. Brian McGrath said private fleets don’t coordinate well with incident commanders, can be a liability for firefighters on the front lines and can make their job more difficult.

Though McGrath said he’s never personally encountered a situation in which a private firefighter needed to be rescued, he said having them in the field can be a hazard for professional crews.

The crews’ presence on major fires became a point of contention in 2008, which prompted Firescope, an organization that manages California’s Wildland Fire Incident Command System, to develop guidelines for how the private companies should operate.

Those standards, which include a provision for private fleets to check in with commanders so fire departments know where they plan to deploy, were formalized into law in a state Assembly bill signed by Gov. Jerry Brown in September.

“Our No.1 operation priority is always life safety,” McGrath said. “When we think an area has been evacuated and they’re in there, we’d have to go back and try to get them out. It’s a liability and safety issue.”

Private Firefighters Date Back To The 1790’S

Among the army of firefighters protecting neighborhoods at the front lines of Southern California’s monstrous wildfire are small teams hired by insurance companies to provide personalized prevention and protection for homeowners.

Firms including American International, Pure Insurance and Chubb Limited have provided the service for policies for homeowners in wildfire-prone states for about a decade. Chubb contracts with licensed wildfire defense teams across 13 states, with the majority in California, where the fire season lasts all year and huge blazes destroyed thousands of homes in the fall.

The trucks these private firefighters drive to policyholders’ properties are indistinguishable from those used by public fire agencies and they carry much of the same equipment, including water tanks, hoses and flame retarding gels.

Chubb has dispatched 11 trucks carrying two firefighters each to about 500 homes in Santa Barbara and Ventura counties northwest of Los Angeles where the Thomas fire has destroyed more than 1,000 buildings since Dec. 4. It’s a welcome service for customers and smart business for an insurance company since saving a home is cheaper than paying out on a policy to rebuild it.

In one case, the teams visited a single home in the fire zone five times over two weeks, according to Kevin Fuhriman, Chubb’s “catastrophe manager” who oversees the company’s California fire response. Team members removed dry brush, patio furniture and anything else around the exterior that could catch fire if embers blew through. They also cleared the gutters and taped up vents.

During subsequent visits, as flames drew closer, sprinklers were installed to keep the ground moist and the property was treated with a hydrating gel. Fuhriman said at one point the private firefighters arrived to find fire on the property and quickly put it out.

The company provides regular updates to evacuated policyholders, who frequently stay in shelters or hotels miles (kilometers) away, anxiously awaiting word about the condition of their properties.

Seth Hatfield said he “started to read the fine print” of his homeowner’s policy several years ago and selected the wildfire defense option when he moved his family into a new house in Santa Barbara. At his previous nearby home, a 2008 blaze burned down the garage and devastated the neighborhood.

The option was included with his policy and did not add any cost to his annual premium, which Hatfield estimated at $3,500. Policyholders do not pay extra but have to opt in to the service because they are required to grant permission for access to their properties.

After the Thomas fire erupted and approached Santa Barbara, the insurance team arrived to check that preventive measures were in place for Hatfield’s property in the Mission Canyon area, where home prices commonly top $2 million.

“They gave me a couple of pointers of things that hadn’t occurred to me,” like removing doormats, taping vents and cleaning gutters, he said.

His family evacuated but returned to find the home still standing.

As potentially dangerous gusts whipped up again Thursday and threatened to blow embers back into neighborhoods, Chubb crews were keeping an eye on the shifting conditions and staging near the wealthy hillside community of Montecito, Fuhriman said.

There were 75 private firefighters on 41 engines assigned to the Thomas fire on Thursday, according to the California Department of Forestry and Fire Protection.

Firefighting contracting is not a new phenomenon within the insurance industry. Insurance firms in the United States had relationships with private firefighters dating back to the 1790s before public fire departments became common, according to Fran O’Brien, a Chubb division president.

He said it is a relatively new process that’s still finding its way in California. The private crews attend briefings with state firefighters and must provide documentation and details about where in the fire zone they’re going. They must also heed all evacuation orders.

“They can’t just come and go. We need to know where they are,” McLean said.

Poll: Should We or Shouldn’t We Use Private Fire Departments