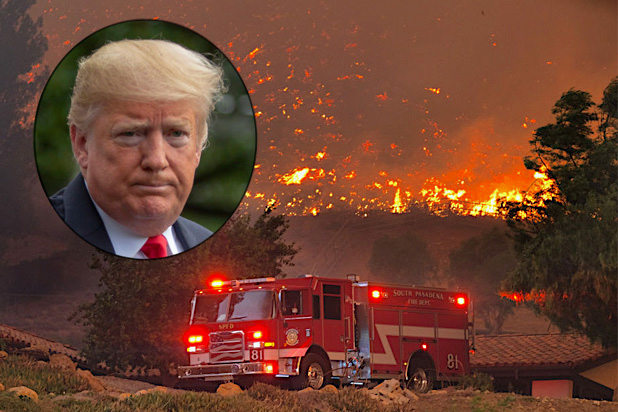 Trump says “billions of dollars are given each year, with so many lives lost, all because of gross mismanagement of the forests. Remedy now, or no more Fed payments!”  California Firefighter Advocate Hits Back At Trump’s Threat To Withhold Funding Amid Devastating Fires

Trump said via Twiitter that “there is no reason for these massive, deadly and costly fires in California.” Trump says “billions of dollars are given each year, with so many lives lost, all because of gross mismanagement of the forests.
Remedy now, or no more Fed payments!”

There is no reason for these massive, deadly and costly forest fires in California except that forest management is so poor.
Billions of dollars are given each year, with so many lives lost, all because of gross mismanagement of the forests. Remedy now, or no more Fed payments!

The remarks triggered swift backlash from the president of the California Professional Firefighters association, who accused Trump of “demeaning” the fire crews working tirelessly to save lives and property as flames tore through both Northern and Southern California.

“At a time when our every effort should be focused on vanquishing the destructive fires and helping the victims, the president has chosen instead to issue an uninformed political threat aimed squarely at the innocent victims of these cataclysmic fires,” Brian Rice said in a statement.

1. The fires didn’t start in a forest,
2. Forest management is managed by the federal government not the states.
3. Largest in history. Congrats to your administration for failing.

“At this moment, thousands of our brother and sister firefighters are putting their lives on the line to protect the lives and property of thousands. Some of them are doing so even as their own homes lay in ruins. In my view, this shameful attack on California is an attack on all our courageous men and women on the front lines.”

Rice went on to dismantle Trump’s assertion that forest mismanagement was a contributor to the fires.

“The president’s assertion that California’s forest management policies are to blame for catastrophic wildfire is dangerously wrong,” Rice wrote. “Wildfires are sparked and spread not only in forested areas but in populated areas and open fields fueled by parched vegetation, high winds, low humidity and geography.”

“Moreover, nearly 60 percent of California forests are under federal management, and another two-thirds under private control. It is the federal government that has chosen to divert resources away from forest management, not California,” Rice said.

California governor-elect Gavin Newsom also weighed in on Trump’s remarks, directing attention to the beleaguered victims of the blazes.

Katy Perry is slamming President Trump over his tweet about the California wildfires. The singer took to Twitter the same day to retweet the president’s tweet with her own reaction, calling Trump’s reaction “heartless.”

This is an absolutely heartless response. There aren’t even politics involved.
Just good American families losing their homes as you tweet, evacuating into shelters. https://t.co/DJ4PN26bLZ

“Lives have been lost. Entire towns have been burned to the ground. Cars abandoned on the side of the road. People are being forced to flee their homes. This is not a time for partisanship. This is a time for coordinating relief and response and lifting those in need up,” Newsom tweeted.

The comments were Trump’s first about the deadly wildfires, including a blaze that incinerated most of the Northern California town of Paradise and killed at least nine people. The Camp Fire has grown to eclipse the former most destructive fire in California’s history based on the number of structures razed by flames.

Wildfires also raged in Southern California, including the town of Thousand Oaks, where a gunman days earlier killed a dozen people at a local bar.

Homes were consumed by the blaze in several coastal communities, including the city of Malibu, which was completely evacuated. Tens of thousands of residents in the Woolsey Fire’s path were driven from their homes into evacuation shelters.

“Natural disasters are not “red” or “blue” – they destroy regardless of party,” Rice said. “Right now, families are in mourning, thousands have lost homes, and a quarter-million Americans have been forced to flee. At this desperate time, we would encourage the president to offer support in word and deed, instead of recrimination and blame.”

Trump later tweeted again about the California fires in what appeared to be a stark change of tone.

“More than 4,000 are fighting the Camp and Woolsey Fires in California that have burned over 170,000 acres. Our hearts are with those fighting the fires, the 52,000 who have evacuated, and the families of the 11 who have died. The destruction is catastrophic. God Bless them all,” Trump wrote.

According to Cal Fire, 253,000 California residents have been evacuated from their homes and more than 5,000 firefighters are actively working on the front lines of the blazes.