The Camp Fire, California’s deadliest and most destructive wildfire, has left communities around the state reevaluating everything from their evacuation routes to communications systems. California Rethinks Firefighting Tactics, Evacuation Routes for Future Wildfires (#GotBitcoin?) 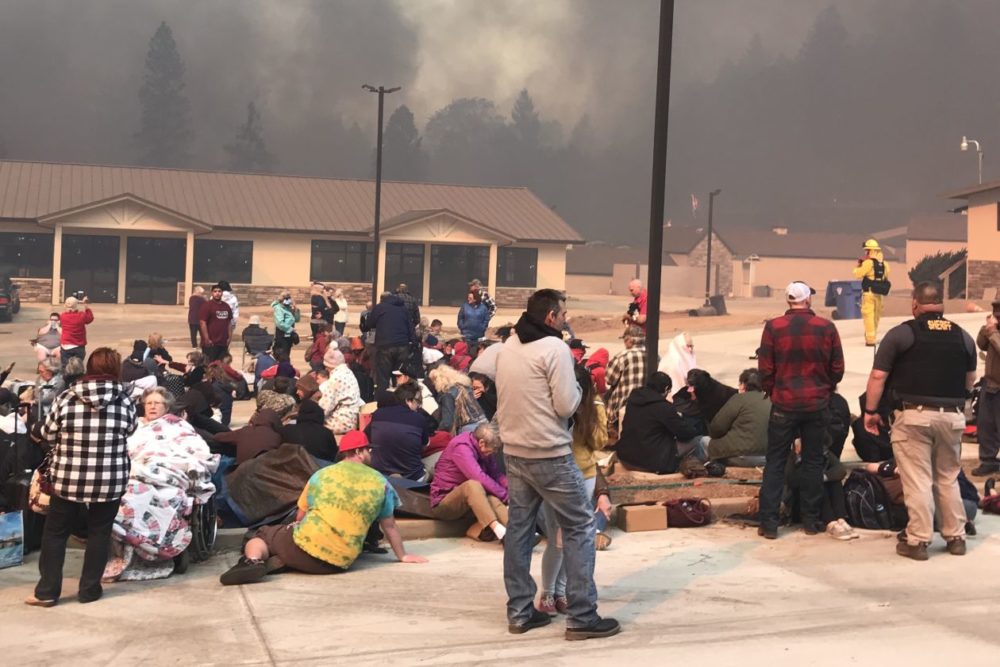 James Gore, a supervisor in Sonoma County, which was ravaged by multiple fires in October 2017, said 13 communities in high-risk areas have put together maps, and residents are now practicing new escape routes more regularly.

“Everybody is playing catch-up. Everybody is trying to address the new normal,” said Mr. Gore, who is leading the statewide county association’s effort to help others better prepare.

Seven of California’s 20 most destructive wildfires and five of its deadliest have occurred in just the last 13 months. The Tubbs Fire that hit Sonoma and Napa Counties last year killed 22 people; it was considered the state’s most destructive before the Camp Fire ignited. The latter has killed at least 88 people and burned roughly 18,800 structures.

Cal-Fire, the state fire-protection agency, has classified more than 180 locales in 31 counties—from Siskiyou on the state’s northern border to San Diego to the south—as being in the most hazardous fire zones. Paradise is on the list, as are communities like Berkeley, Oakland, Los Angeles, Malibu, Monterey, Santa Rosa and Thousand Oaks.

“There is a whole new focus,” said Graham Knaus, the executive director of the California State Association of Counties. “When you have wildfires moving 80 football fields per minute…it causes a full revaluation on how best to move forward.”

Rebecca August, a public lands advocate with Los Padres ForestWatch, a nonprofit, attended a hearing on California’s emergency-warning system earlier this week. She said attendees discussed deploying fire-safe shelters in area that might be hard to evacuate.

“I hadn’t heard people talking about that before,” she said.

Citizen groups are also taking action. Priscilla Abercrombie, who lives on Fitch Mountain outside of Healdsburg, in Sonoma, is part of a group that has put together a phone tree residents can use to help evacuate if a fire or other natural disaster strikes. Healdsburg firefighters debriefed her group this week about the recent fires.

“People are really motivated,” she said. “The take-home message is to know who your neighbor is and ways to get off the mountain, and have a plan, and have your stuff ready.”

Perhaps the most frightening aspect of the Camp Fire that destroyed Paradise, a former Gold Rush town of 26,000, was how quickly it moved. The fire was first noticed before 7:00 a.m on Nov. 8, and an hour later the entire town was under an evacuation order. Two hours after sundown, the community was all but wiped out.

“We had planned for a wildfire. What we got was a hydrogen bomb,” said Jim Broshears, Paradise’s emergency-operations center coordinator.

After a particularly bad fire season in 2008 in the area, a grand jury report laid out critical shortcomings in preparedness. The report concluded that additional evacuation routes were necessary after thick smoke forced three main roads out of Paradise to close, and left a fourth choked with a single lane of traffic.

One new paved evacuation road has been built since then, a northbound route that took 10 years to complete. Kim K. Yamaguchi, who lobbied for the project when he was on the Butte County Board of Supervisors, said he has received thank-you messages from people who used it to escape the Camp Fire. “Touched my heart,” he said.

Officials say a plan put in place after 2008 to evacuate Paradise in phases to better control traffic flows didn’t work well because embers sparked hundreds of spot fires across the town, forcing evacuation orders to be issued in rapid succession.

Officials say it would take much more than a few million dollars to finance the road projects rural communities like Paradise need to evacuate thousands of people quickly.

Phil John is chairman of the Paradise Ridge Fire Safe Council, which has tried for years to advise residents how to create defensible space around their homes and what to take with them when they evacuate.

After the deadly and fast-moving Tubbs Fire decimated large parts of Santa Rosa last year, Mr. John said, he reworked his group’s safety presentations to put even more emphasis on how to evacuate quickly.

“My guts are tore up because I gave my whole life to teach people what to do, and it just didn’t work,” he said. “There’s people that are dead right now because we didn’t get to them, and I have to live with that.”

BERRY CREEK, Calif.—As the smoke from the nearby fire-devastated town of Paradise cleared in 2018, local officials were trying to gain approval of forest-thinning projects to help this mountain community avoid a similar fate.

Nearly two years after they first applied for approval from the state of California, the contract for one of the projects went out for bidding on Sept. 4. At the same time, work was about to start on the other after a monthslong wait caused in part by the coronavirus pandemic.

Then just four days later, the North Complex fire roared through this community of 2,500, wiping out most of the homes and leaving at least 10 people dead, more than one-third of the total fatalities from wildfires this year in California.

“I tried to work with anyone who would listen to avoid what happened,” Denise Bethune, a Berry Creek fire safety coordinator, said from her son’s residence in the nearby city of Chico, where she and her husband have been living since their two-bedroom home burned to the ground.

Among the factors contributing to this year’s exceptional wildfire season are climate change, which causes higher temperatures and longer droughts, and poor forest management, according to scientific experts. State and local governments haven’t done enough to thin dry brush and dead trees that burn easily around populated areas, they say.

Few places have felt the consequences more severely than Butte County, a rural area north of Sacramento where 19 large fires have scorched some 400,000 acres since 1999.

Earlier this week, Loren Gill drove into what remains of Berry Creek in an SUV to pick through some of the rubble of what had been a park community center. Nearby lay the ruins of Berry Creek Elementary, with a sign of its mascot, a Native American brave, charred.

“This is unbelievable,” Mr. Gill, 78 years old, said as he drove past dozens of leveled homes, some with only the chimneys still intact. “Just a nightmare.”

The Butte County Fire Safe Council on Oct. 26, 2018, received an $836,365 grant from the California Department of Forestry and Fire Protection, or Cal Fire, to remove trees and brush from 234 acres. The plan was to create fire breaks along two of the main evacuation roads and for a development of homes around Lake Madrone.

Getting approval to spend the money would take almost two years.

While it is impossible to determine how Berry Creek would have fared if the thinning projects had been implemented, local officials said videos of other nearby areas where trees and brush were trimmed showed lower flames that moved slower.

Bald Rock and Rockerfeller roads, the two evacuation routes, now have charred cars and trucks on them. Around Lake Madrone, more than 50 homes were destroyed.

“Somebody dropped the ball,” said Becky North, 41, whose family of four lost the house they lived in since building it in 2011. “I think some homes would have been saved.”

After the Camp Fire destroyed Paradise on Nov. 8, 2018, officials of the Butte County Fire Safe Council—which acts as an umbrella group for fire safety in the area—urged state lawmakers to streamline regulatory red tape.

California Gov. Gavin Newsom responded to the Camp Fire with a slew of directives, including fast-tracked authority for 35 thinning projects to protect 200 communities. Cal Fire said some of the projects had helped slow fires including one in Butte County completed last December.

The Berry Creek projects languished as the Butte County Fire Safe Council struggled to gain landowner approvals for the thinning, a requirement of the California Environmental Quality Act, or CEQA. One of the strictest such laws in the nation, CEQA makes it easy for local residents and interest groups to oppose construction and development projects.

In addition, Cal Fire officials kicked back some of the paperwork filed by the local leaders because it had been improperly formatted. “It’s about lawsuits and if there is not enough information for us to sign we have to ask for more,” said Dave Derby, unit forester for Cal Fire’s Butte area.

A spokesman for Gov. Newsom said his administration is committed to doing more forest-clearing work and that additional projects will be announced in the coming weeks.

It took 17 months to get the final go ahead from Cal Fire in March. Then a new problem hit: the coronavirus pandemic, which Ms. Bethune said put some of that work on hold.

After approval for the plan to create fire breaks along the evacuation roads came in July, Ms. DeAnda said her group had hoped to start both projects this fall and complete them within a month.

“We were just waiting on the contractor to get started,” she said.

The fire has effectively negated the need for that fuel work, now. The forest of pine and oaks surrounding the town was burned so severely that in some places only skeleton trees are left, devoid of leaves.

Volunteer Fire Chief Reed Rankin, who lost his own home, said all he and other first responders could do was evacuate people ahead of a firestorm driven by 40 miles-per-hour winds.

“We’ve got to rethink how we are going to manage the forests,” said Mr. Rankin, after sifting through the rubble of a destroyed fire station. “I’m still at a loss, still numb.”