Women are at nearly equal risk to men to lose their jobs to automation by 2030 as labor-saving technology spreads, study says. Automation Could Force Millions Of Women To Find New Jobs (#GotBitcoin?) 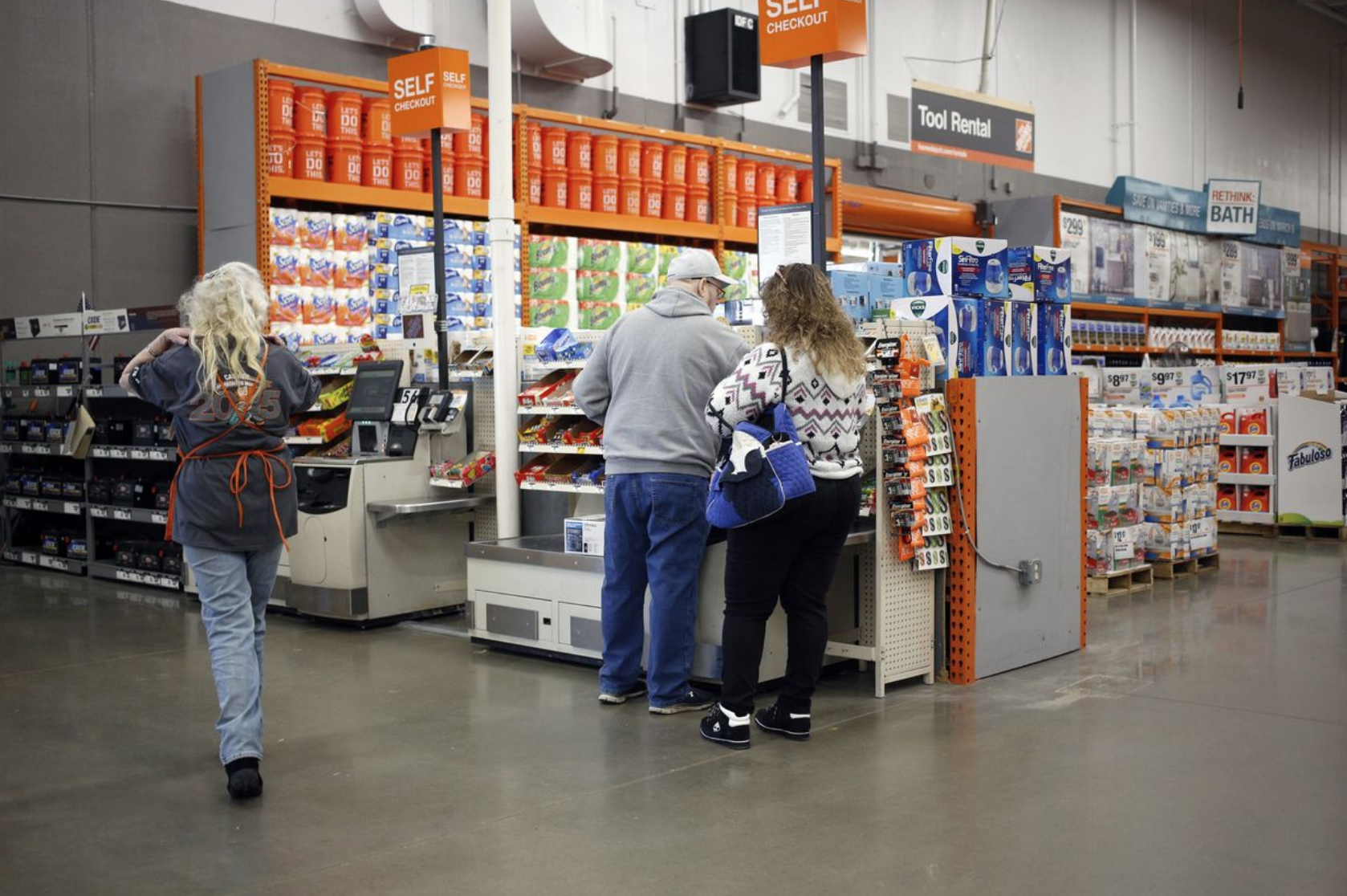 Emerging Automation Technologies Such As The Wider Adoption Of Cashierless Checkouts Could Displace Jobs, A Study Says. Here, Customers Use A Self-Checkout Lane At A Home Depot Store.

Automation could force more than 100 million women globally to find new occupations by 2030, according to a study from McKinsey Global Institute.

Emerging automation technologies will look different and displace a large number of women, said Mekala Krishnan, fellow at the McKinsey Global Institute and one of the report’s authors.

And that technology could change the jobs done by women in the way robotic arms in factories put downward pressure on mostly male manufacturing jobs in the U.S. in recent decades.

“The new wave of automation is much more than manufacturing and robots,” she said in an interview. “The sectors and occupations for which automation will play a role will vary widely and women could be equally impacted as men.”

The McKinsey study isn’t projecting mass job loss due to automation. It forecasts that 171 million new jobs held by women will be created by 2030—and the rate of job growth could be slightly larger for women than for men over that time period. That is largely because women hold the majority of jobs in one of the fastest-growing fields: health care.

The study considers the number of full-time equivalent jobs at risk, allowing that many jobs will be partially automated. For example, a nurse may spend less time in the future on data entry as smart diagnostic machines and voice-recognition technology improve.

In developed countries, a larger share of jobs are on the line. In the U.S., 24% of female jobs and 26% of male jobs are at risk to automation, McKinsey said.

The elevated automation risk found by McKinsey is consistent with another recent study by the Institute for Women’s Policy Research. That study found that while women make up 47% of the U.S. workforce, they account for 58% of workers employed in fields facing the highest risk for automation.

To land jobs expected to be created in the next decade, many women will need to obtain new skills and move into different occupations. The McKinsey study is cautious about projecting that will happen, noting women face several barriers to gaining the skills they will need to transition to in-demand jobs. Men may have an easier time transitioning to new occupations or adapting to technological change, according to the study’s authors.

Among the barriers faced by women is that they take on a higher share of unpaid care work, including child care, leaving them with less time to seek the education needed to make job transitions. Other challenges include more difficulty moving for jobs, smaller representation among students of science, math and engineering and reduced access to technology, especially in emerging economies.

The pandemic acted as a proof of concept for business process automation of routine office jobs.

The pandemic-fueled growth in the adoption of software robots designed to ease routine office work is making one task a lot easier for chief information officers: selling the idea to their corporate bosses.

The technology—known as robotic process automation, or software bots—became a critical tool last year during Covid-19 lockdowns and office closures as companies worked to keep their businesses up and running. Many turned to bots to handle tasks like processing payroll data or expense reports and fielding call-center queries.

“Most people recognize the need for automation,” Mr. Shukla said at The Wall Street Journal’s CIO Network Summit, held online Tuesday. Now there is an even greater appreciation at the board level, he said.

The robotic process automation market is expected to grow by double digits through 2024, according to information-technology research and consulting firm Gartner Inc. It predicts global revenue in the sector will reach $1.89 billion this year, up 19.5% from 2020.

Up to 40% of companies world-wide increased their use of software bots and other forms of automation in response to the pandemic, according to estimates from International Data Corp., a technology research firm.

By market share, the industry leader is New York-based UiPath Inc., followed by Automation Anywhere and U.K.-based Blue Prism Ltd. , according to a 2020 analysis by IDC.

Daniel Dines, UiPath’s co-founder and chief executive, said at Tuesday’s event that the pandemic acted as a rapid-fire proof of concept for software bots, paving the way for corporate tech leaders to make the case for expanding automation efforts—and getting the budget to do it.

“Widespread adoption requires cooperation between CIOs and line-of-business leaders,” Mr. Dines said. “And this technology has been proven in the past two years.”

At the height of the pandemic last year, UiPath said it was adding more than 10 corporate customers a day, a much faster pace than in 2019. Among other businesses, more than a dozen banks and lenders used UiPath software bots to process a flood of loan applications filed by small businesses last year under the federal Paycheck Protection Program, according to the company.

Walgreens said it plans to increase the use of bots in the year ahead, to adapt to changing market and customer needs in the wake of the pandemic, among other things.

Mr. Shukla said CIOs have to lay out a long-term vision for chief executives and corporate board members about how software bots will transform the workplace and their companies in the near future.

Competition for warehouse labor is fierce as e-commerce volumes surge and companies pull out all the stops on recruiting.

Warehouse operators are throwing every tool they can at increasingly urgent efforts to hire seasonal workers as they brace for an expected flood of holiday goods amid competition for scarce labor from deep-pocketed rivals.

Logistics providers are boosting pay, adding flexibility to shifts, blanketing social media with recruitment ads and even shipping in more robots to help workers field surging e-commerce volumes. They are also jockeying with titans like Amazon.com Inc., Walmart Inc. and United Parcel Service Inc. that are dangling inducements, from signing bonuses to assistance with college tuition, as they push to bring on hundreds of thousands of workers ahead of the holidays.

“When companies are looking ahead to peak season…the word I’m hearing most often is ‘terrified,’” said Dan Johnston, chief executive and co-founder of WorkStep, a startup whose software helps companies hire and retain supply-chain workers.

Workers to fill online orders and push merchandise out to stores are in short supply in a tight U.S. labor market in which service industries say the lack of available staff is hampering their recovery efforts. Some warehouse employees say they are already working overtime under sometimes tough conditions to meet heavy consumer demand.

“There is a huge amount of demand for jobs and people, and we have not shifted people across into our industry at the rate that demand has changed,” said Kraig Foreman, president of e-commerce for DHL Supply Chain North America, a unit of Deutsche Post AG whose contract logistics customers include running-shoe maker Brooks Sports Inc. and Italian candy giant Ferrero International SA.

The pandemic accelerated e-commerce adoption as homebound consumers loaded up digital shopping carts. Covid-19 also deepened pressure on blue-collar labor ranks, with some people leaving the workforce because of concerns about getting sick or to care for family members.

Big retailers who once devoted seasonal hiring to store workers are adding to the competition by bringing in more workers to logistics operations geared toward online demand. Walmart plans to hire 20,000 workers for its supply chain operations ahead of the holidays. TargetCorp. plans to hire 100,000 seasonal staffers this year, about 30,000 fewer than last year’s goal, but the retailer said it has tripled the number of store fulfillment workers over the past two years.

The push for workers is driving sharp increases in pay. Wages for e-commerce workers have jumped from between $13 to $15 an hour in recent years to as much as $19 an hour in some markets, logistics executives said, led by the sector’s biggest operators.

Starting pay for Amazon warehouse workers is up to $22 an hour in some locations, the company said, while the average hourly wage for supply-chain workers at rival Walmart is now $20.37.

Even the largest operators are feeling the strain. The tight labor market added $450 million to FedEx Corp.’s costs in the most recent quarter, the delivery giant said last week, with those headwinds expected to persist through the end of the year.

Alejandro Mateo, who earns $13.25 an hour picking online and wholesale clothing orders for G-III Apparel Group Ltd. at a warehouse in Dayton, N.J., said many of his co-workers have quit for other distribution jobs that pay more.

The remaining staff are working overtime to push merchandise out to stores for the holiday season, Mr. Mateo, a union shop steward for the Laundry, Distribution and Food Service Joint Board, Workers United, SEIU, said through a translator.

“The work is not easy,” Mr. Mateo said. “We don’t have any air conditioners, they promised us fans and they still haven’t provided all the fans.” The 62-year-old said he injured his back pulling clothing-laden trolleys.

A representative for G-III, which designs, sources and markets apparel for brands including DKNY and Andrew Marc, declined to comment.

Even with pay raises, the press for labor is so strong that some warehouse employers have started offering four- and five-hour shifts to accommodate workers who can’t take on a full day because of child care or other obligations, said Brian Devine, senior vice president of logistics-staffing firm ProLogistix.

The tight job market is “the most frustrating thing in my 26-year career,” Mr. Devine said. “Our recruiting costs have doubled, we’re advertising more…everything from help-wanted yard signs to drive-through job fairs. Radio campaigns, billboards, we’re pulling out all the stops.”

Some companies aren’t waiting around for human workers. The staffing crunch is accelerating automation across largely manual warehousing and fulfillment operations, as companies girding for big seasonal spikes in volume try to step up their ability to handle goods.

Greenwich, Conn.-based GXO Logistics Inc. added 40% more robotics and automation systems in North America in 2021 and plans to open nine new automated U.S. sites to support e-commerce this year. GXO said it has increased pay by between $3 to $5 an hour on average in key markets and is offering other financial incentives, including sign-on bonuses.

The demand isn’t expected to let up anytime soon.

France-based logistics provider Geodis SA expects its North American e-commerce business to handle 20% more volume this year in the post-Thanksgiving shopping rush between Black Friday and Cyber Monday. The company, which is also increasing its use of robots, is looking to bring on about 10,000 seasonal workers this year, up from 8,500 in 2020.

“I don’t see it ever going back to where it was, pre-Covid,” said Mike Honious, Geodis’s chief executive for the Americas.

‘A Horrible Culture Of Machismo’: Women Struggle With Violence In Mexico (#GotBitcoin?)

We Now Live In A World With Customized Bar Soaps, Lotions And Shampoos (#GotBitcoin?)

Which Lipsticks Contain The Most Lead, Cadmium, Aluminum And Other Heavy Metals? (#GotBitcoin?)

Why Men Won’t Go To The Doctor, And How To Change That (#GotBitcoin?)

He Conquered Cancer, Then 15 Spartan Races In A Year (#GotBitcoin?)

Poll: What Are You (Men/Women) Doing To Avoid The Toxins/Poisons In Commercial Beauty Products?