A labyrinth is a single path or unicursal tool for personal, psychological and spiritual transformation. Labyrinths are thought to enhance right brain activity. Spiritual Technology: A Users Guide For Walking A Labyrinth 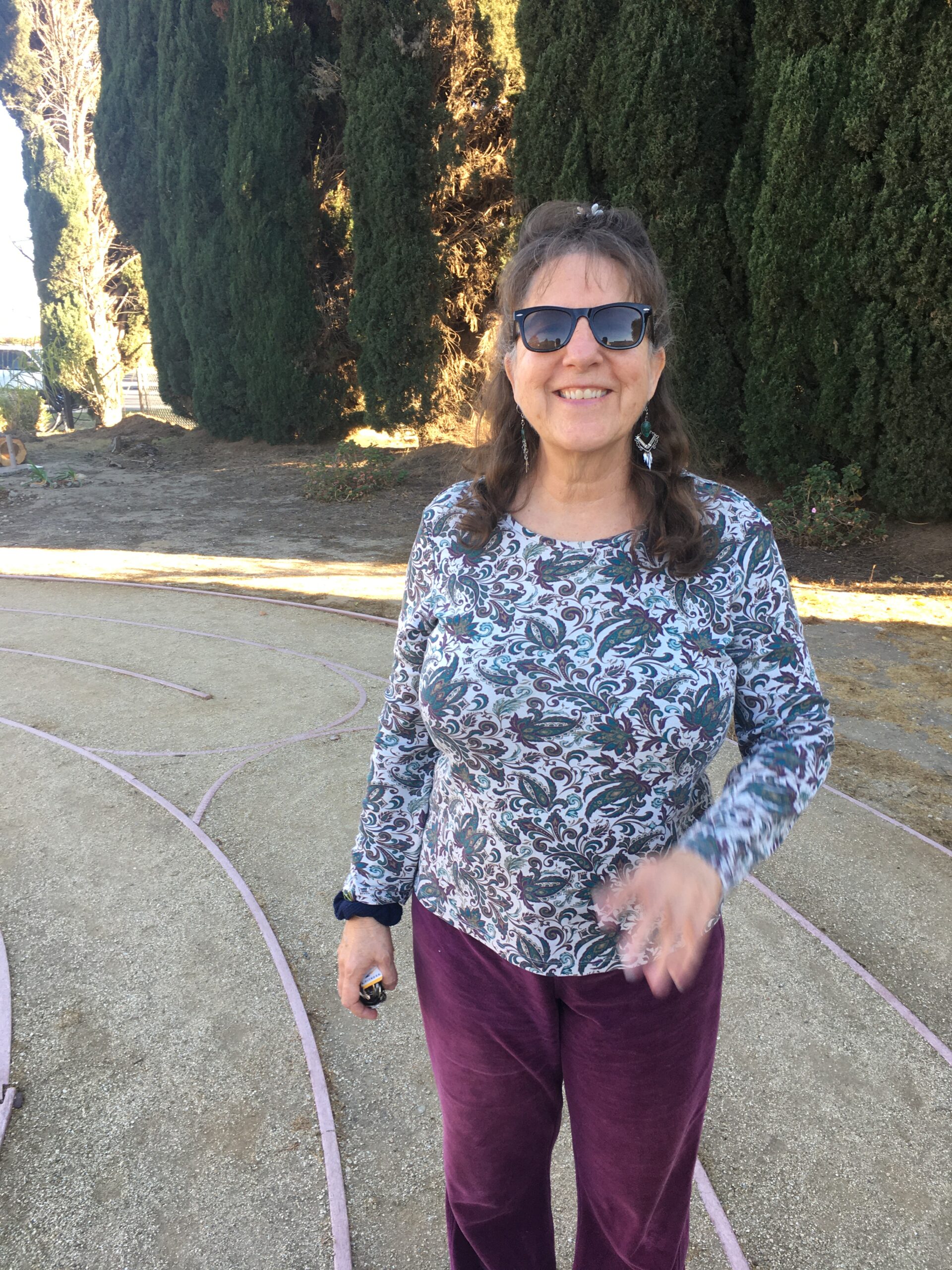 through the mouth and then walk on the paths or circuits. The walls keep you on the path. The goal is in the center of the labyrinth. When you reach it, you have gone half the distance – you now need to turn around and walk back out.

The original use and purpose of the Labyrinth has been obscured by time.  Its current popularity as a moving meditation has engendered many creative approaches to a potential encounter with Spirit. I have 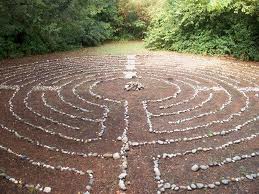 found that being attuned to the Four Directions and other elements in the environment further enhanced this meditation by honoring the natural, non-human world in the way of Native American spirituality. 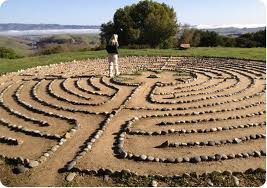 Its unbroken path of circuits and turns, take you in to the center and back out again by the same route.  Walking it, you were frequently changing directions (and gaining new perspectives), though still on the path.

By engaging the body and all its senses, a Labyrinth walker may become receptive to spiritual insights that cannot be accessed by the intellect alone.  The simplest guide I found is as follows:

* Going In You Release The Cares And Concerns Which Distract You From Your Source (Spirit);

* Reaching The  Center You Discover A Place Of Prayer And Meditation For Clarity;

* Coming Out You Are Granted The Power To Act.

You move inward to a place of stillness, and then outward, the route taken being an intricate spiral. If you stay on the path, you cannot 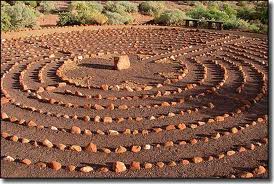 get lost, there are no choices or tricks (as in a maze) involved.   All Labyrinth forms follow this basic theme, though not all are circular and the pattern created by the single path varies.

The Medicine Wheel, for example, is more than a symbolic or metaphoric structure; it is co-created with elements in nature that are considered themselves to be conscious entities.  It provides a different circular setting but a similar purpose to that of the Labyrinth in connecting you with Spirit and Nature.  The physical structure is created ritually using 12 sacred rocks to mark the Four Directions and the circle (Sacred Hoop).

These Stone People are considered to be the guardians of Sacred Ceremonial Space, holding the energy of the circle. It is said that ‘Our Spirit [Wind] can travel around the rim of the Medicine Wheel and send us urges to learn certain lessons… 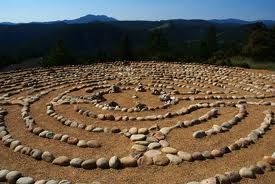 The power (talents and lessons) of the Four Directions can be immediate answers when sent by the Wind Spirits.’

Just as with the Labyrinth, the Wheel can be adapted as a personal sacred space.  One person taking the Wheel as her inspiration, she added a sacred dimension to her garden design with her concept of a Medicine Wheel Garden.  She writes:

“the medicine wheel garden can move each of us into new healing and spiritual realms’ and ‘affirm our personal ties with the earth”.  “I’ve found being 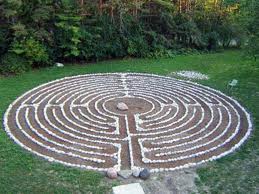 out in nature in this sacred way to be a powerful means of relating to the environment that surrounds us.” 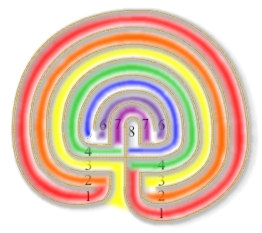 Notice that you don’t walk these paths in order from one to eight. The colors don’t go Red, Orange, Yellow, Green, Blue, Indigo, Violet (ROY G BIV). ‘Walk’ the labyrinth above with your finger. 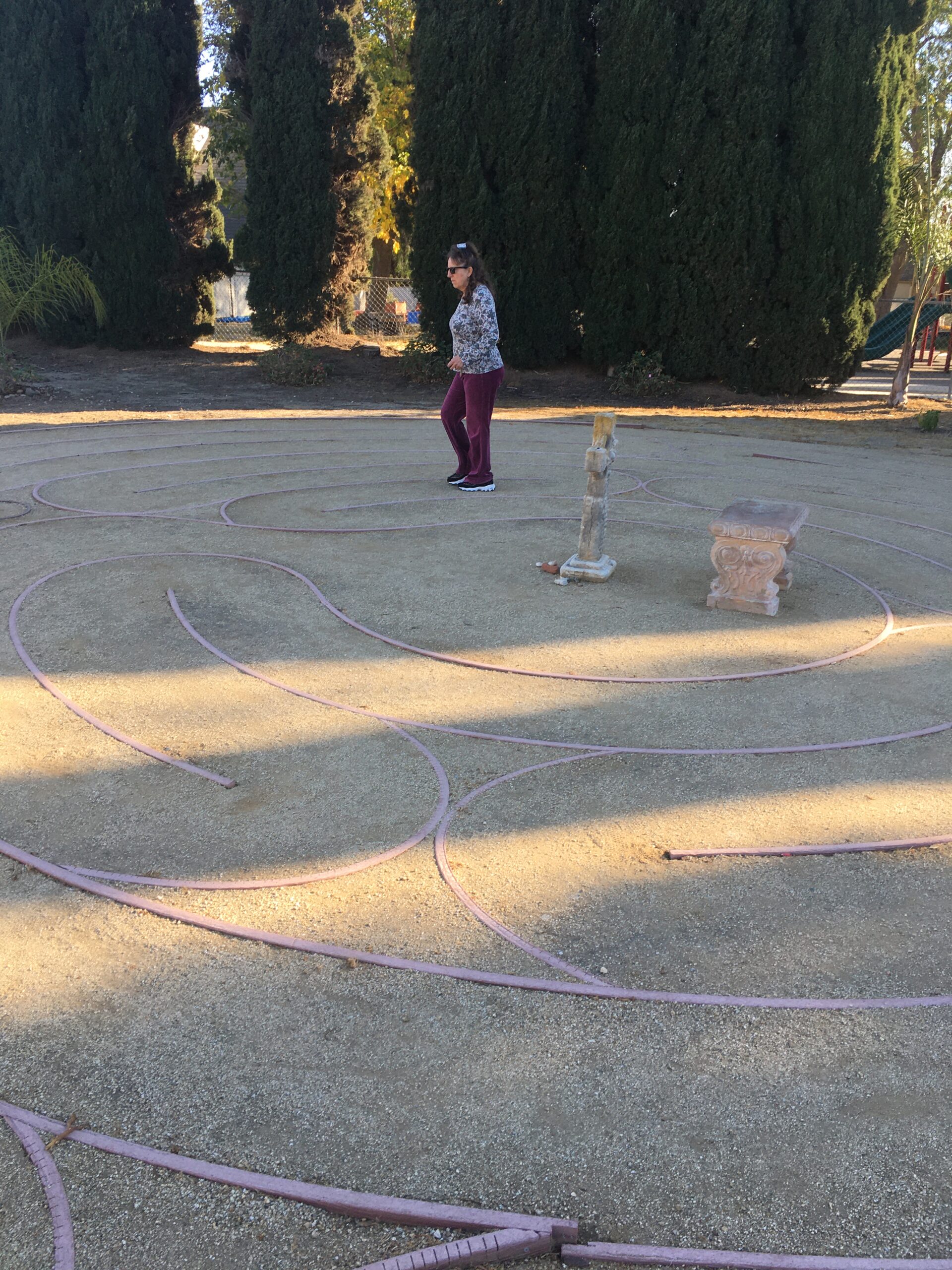 Some Believe It’s Important To Locate or Place A Labyrinth On One Of The Earth’s Energy Ley Lines.

Some additional Information on how to properly identify an area for a labyrinth you plan to build.

Labyrinths Serve As A Pathway To Peace

“All I asked for was just a little place to walk the walk,” said Ruth Ann Harnisch, a 65-year-old philanthropist.

What she got-after a massive, two-year earthwork project at her home in New York’s Hamptons-is an 86-foot tripartite path of hand-cut stone, set in lush fescue grass.

It took 5,000 square feet of North River bluestone to create the intricately winding walkway-called a labyrinth-which has 18 looping turns and is encircled by a 300-foot-long fieldstone wall. The pavers were set in dry-pack mortar on top of concrete wire mesh, to hold them in place. An underground irrigation system was installed to keep the grass bright and shaggy.

Thirteen mature Yoshino cherry trees, trucked into the site, ring the labyrinth. In the springtime, they shower its walkways with white blossoms. “It’s magical,” said Bill Harnisch, 69, president and CEO of Peconic Partners, an investment firm. 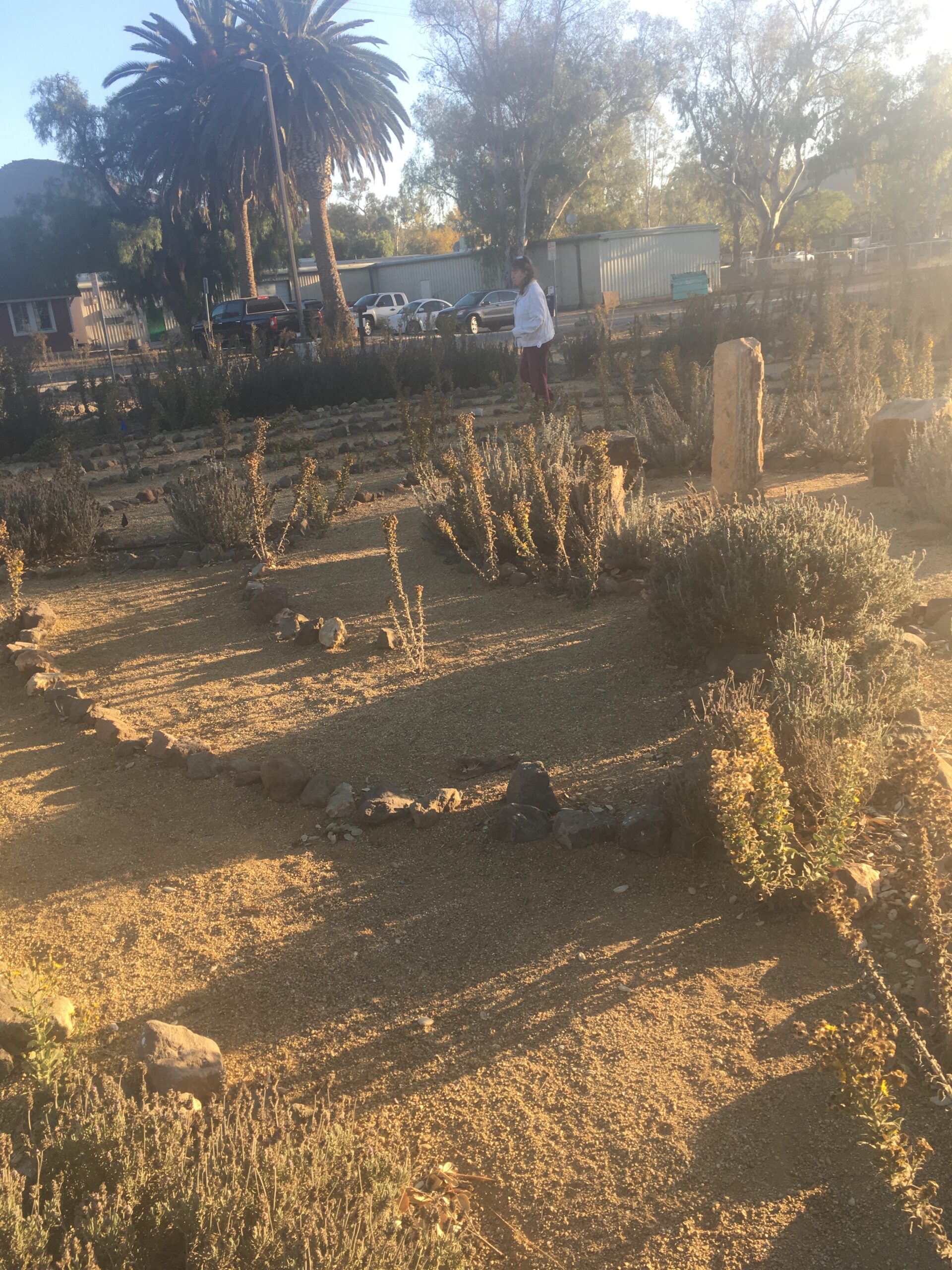 Labyrinths-circular paths for walking meditation that have been widely adapted by churches, hospitals and retreat centers-are now popping up in upscale American backyards. “There are 3,740 labyrinths in the U.S.-it’s really blossoming,” said Lauren Artress, author of “Walking a Sacred Path: Rediscovering the Labyrinth as a Spiritual Practice.” Some are simple, such as the 30-foot spiral of desert stones that Andrew Weil, the physician, author and founder of the University of Arizona Center for Integrative Medicine, built at his home in Tucson. Other, more lavish walkways evoke the 13th-century labyrinth of Chartres Cathedral in France.

Unlike a maze, which is designed to confuse with multiple paths and dead ends, a classical labyrinth has just one winding path to the center and one path out. “As a relaxation technique, a technique for promoting mindfulness, it’s very useful,” Dr. Weil said. “You go around and around and back and forth, but eventually you reach a central point… Seeing the goal there, but not getting to it directly-there’s something metaphoric about that.” 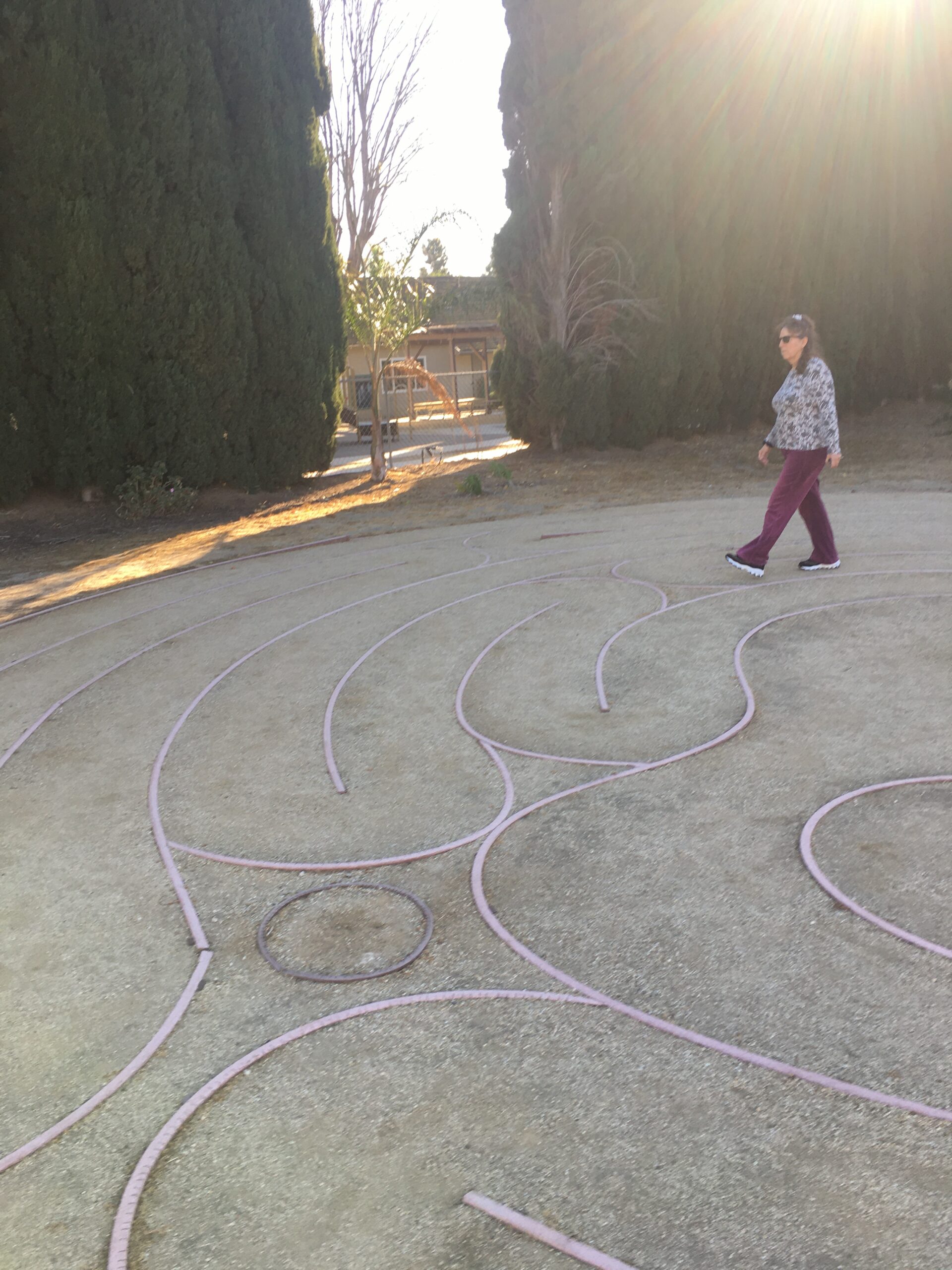 Getting that Zen-like peace can require commitment. Elaborate labyrinths, with lush landscaping, intricate stonework and irrigation, can easily start at around $40,000.

Calculating the cost of the Harnisch labyrinth, completed in 2012, is difficult to estimate, Mr. Harnisch said, because it was only one part of master plan for the 12-acre waterfront property in Southampton Town. Edmund Hollander, the landscape architect who created the labyrinth, said that the price of replicating it would probably be around $500,000.

John and Pam Corckran built a 24-foot labyrinth on the grounds of their suburban Baltimore home in 2013. The project was a response to the sudden death of their son, John, at age 35.

“My husband and I felt the need to create some space where we could be with our son and think of him,” said Ms. Corckran, who is 67. “A labyrinth was the very first thing I thought of.”

Claire Jones, Ms. Corckran’s landscape designer, said the intricate, quadrant-style labyrinth, which has five circuits, was chosen “to give you a greater journey” within a relatively small space. A stonemason spent a month on the site, hand-cutting and fitting each piece of bluestone atop a bed of pulverized stone dust. 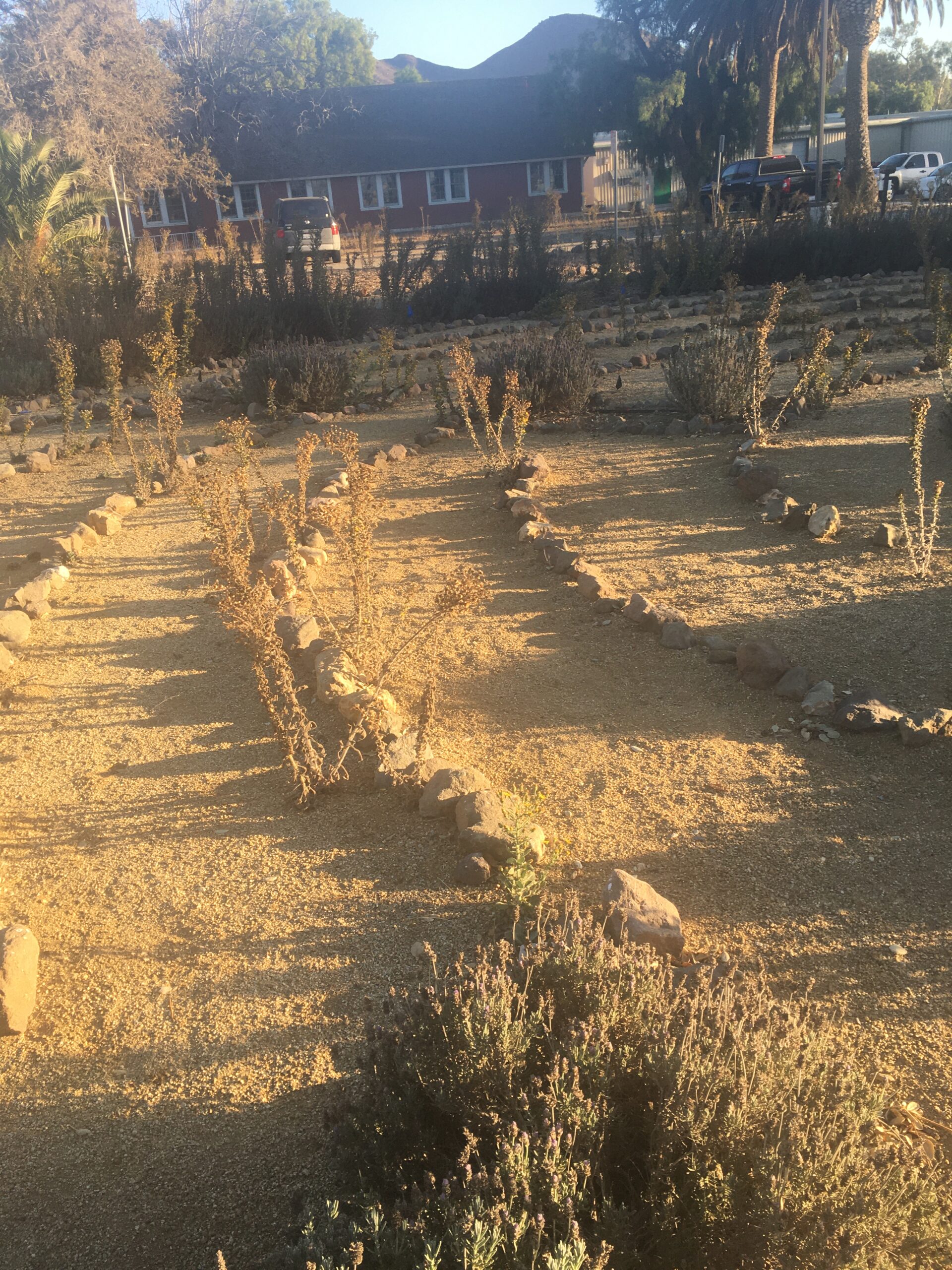 The labyrinth sits inside the curve of a low fieldstone wall. A water feature made from a boulder is positioned at its entrance, amid plantings chosen for color and fragrance, such as Japanese forest grass, clethra, and Lenten rose. The labyrinth requires little maintenance, although the pavers had to be power-washed this year when moss began to grow.

Ms. Corckran estimated the cost of the entire project at around $40,000.

“It’s very much a part of my life now. If the mood strikes, or I’m having a rough day, it’s the best place to go-with grief you never know,” said Ms. Corckran.

Her design came from the Labyrinth Co., based in Kensington, Conn., which sells 46 different templates for garden labyrinths. Printed on a weed-blocking landscape fabric, the template is set on level, prepared ground and then filled with stone, gravel, or sod-much like a paint-by-numbers kit. The company also sells concrete paver kits, including six variations on the Chartres Cathedral labyrinth. “That’s the one most people want to reproduce-I specialize in that,” said David Tolzmann, the company’s founder and president, who has built full-size Chartres replicas-42.3 feet in diameter-in granite, French limestone and Turkish travertine, with costs ranging between $50,000 to $250,000, he said.

Mr. Tolzmann said that private clients account for between a quarter to a third of his business, and generated “several hundred thousand” dollars in sales last year. “There’s been an increase in private demand. I don’t think it’s spiked yet-I’ve been doing this 20 years, and every year we do more,” he said.

Suzanne Deal Booth, an art-preservation advocate and collector based in Austin, Texas, decided to create a 24-foot labyrinth at her Napa Valley home. The labyrinth is located within a small grove of old Sevillano olive trees on her 27-acre vineyard property in Rutherford, Calif. “I’d been to Chartres, which is incredibly beautiful,” said Ms. Deal Booth, who is 60. “This space was so much smaller. If someone else is walking you could actually brush shoulders with them-it’s tight-but because of the olive trees it feels right.”

Belgian cobblestones line the labyrinth’s paths of gravel, chosen for its satisfying crunch underfoot. Tall bay laurel hedges and sculpted boxwood globes screen the labyrinth from an adjacent driveway, creating “this lovely secret spot,” said landscape designer Sarah Keizer, of Andrea Cochran Landscape Architecture. Reclaimed granite curbstones from Boston were repurposed as a path leading to the labyrinth, and a 1,600-pound Montana slate ledgestone was positioned at its center as a perch. 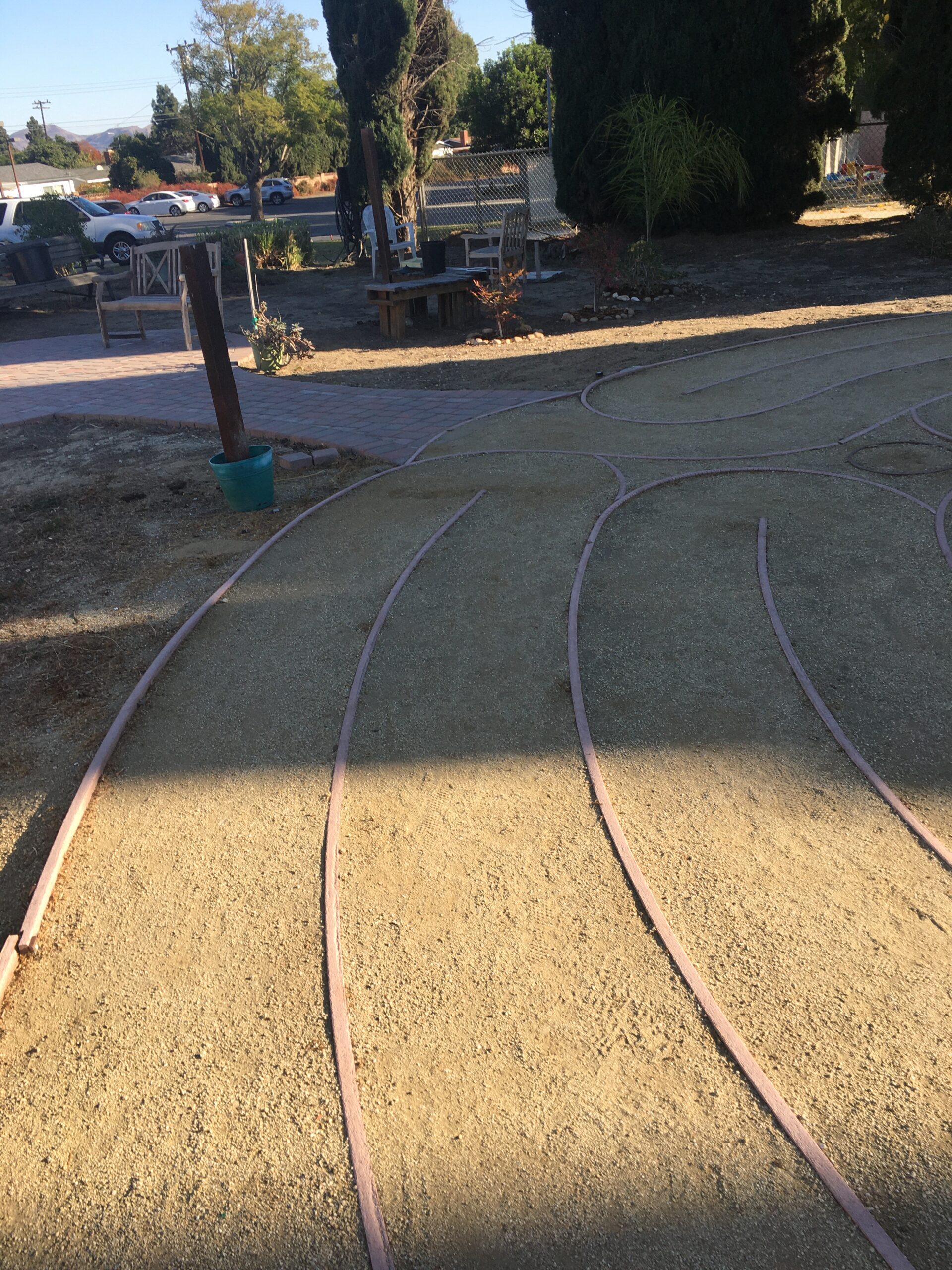 Kim Visokey, an ardent gardener who blogs as the “gardenfreak,” was inspired to transform her 1-acre property in Winnetka, Ill., into a pair of intersecting spiral labyrinths. “All it is, is sod cut at two different levels. It’s been cut this way for so many years, it’s just established itself as sculpture,” said Ms. Visokey, who is 55. “It looks fabulous in winter when there’s frost on it.”

The first spiral, which is 80 feet in diameter, was cut into the Kentucky bluegrass-blend turf in 2006. Ryan Kettelkamp, Ms. Visokey’s landscaper, tied a 22-inch lawn mower to a stake at the center of the lawn, and mowed in diminishing circles around it-a process he compared to a dog on a leash running around a pole. A second smaller spiral was added in 2007. “So many people have big amorphous amoebic lawns,” said Mr. Kettelkamp. “We set out to create a unique space.” 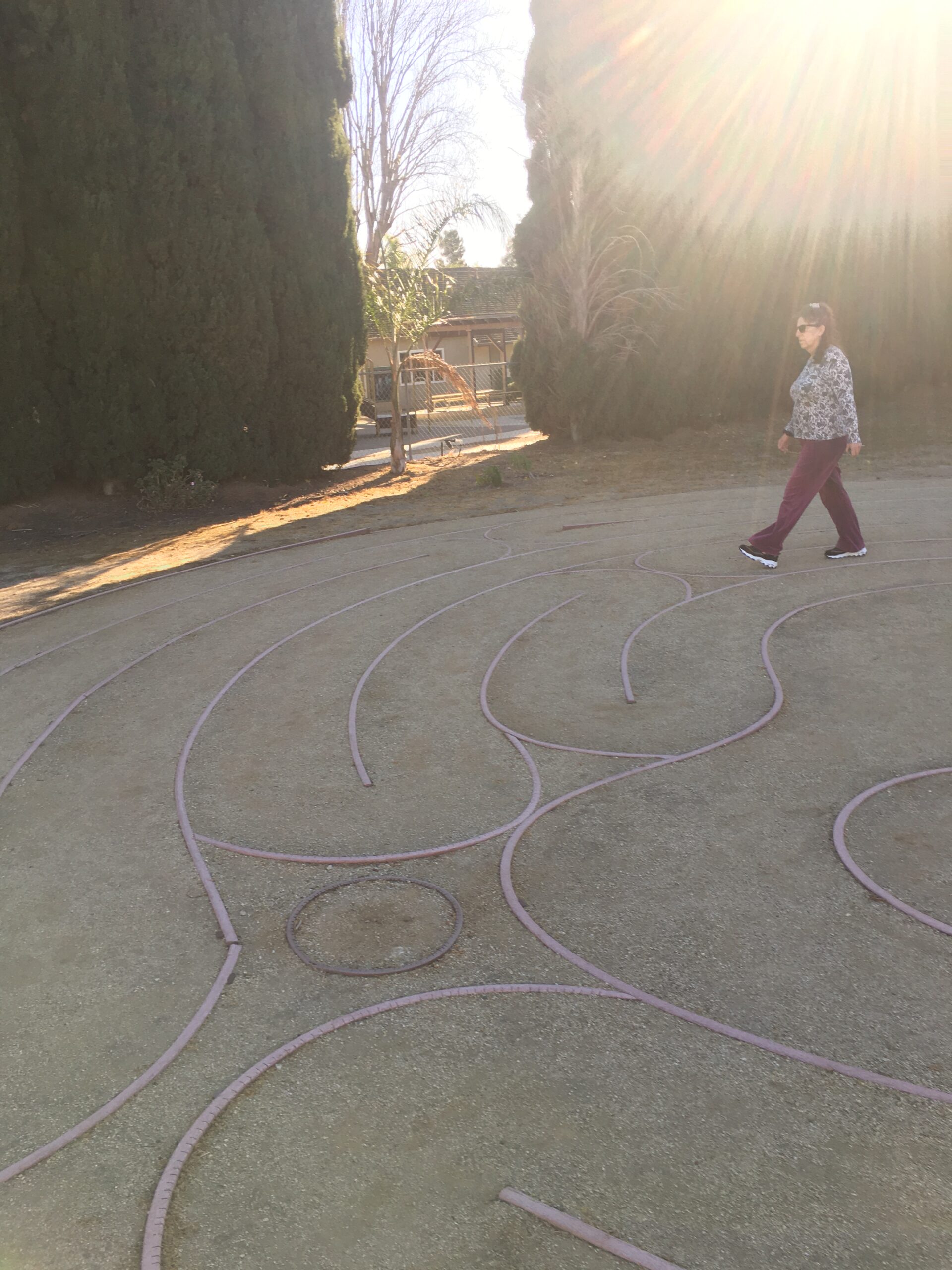 Ms. Visokey pays about $100 each week between May and November to a mowing team, which manicures the labyrinths’ pathways under her supervision. She said the spirals are a hit with visitors on garden tours, as well as her own family; on a recent visit home, her three children, who are in their 20s, took over the large labyrinth for an impromptu morning yoga session with their friends.