Bitcoin Is Back Above $10,000 And Investors Say This Rally Is Different (#GotBitcoin?)

The world’s most popular cryptocurrency gets a boost from Facebook’s plan to launch Libra. Bitcoin Is Back Above $10,000 And Investors Say This Rally Is Different (#GotBitcoin?)

Bitcoin rose over $10,000 for the first time in over a year, riding a new wave of optimism about the value and future of digital currencies.

The world’s most popular cryptocurrency hit the milestone late Friday. By Saturday morning, it had already climbed above $11,000, according to research site CoinDesk. Bitcoin has more than tripled in value from its low at the end of 2018.

The biggest news in the sector this year has been the unveiling of Libra, a cryptocurrency created by Facebook Inc. Investors have been buying bitcoin on the expectation that Libra is going to bring digital currencies to mainstream users, a goal that so far has eluded bitcoin itself. 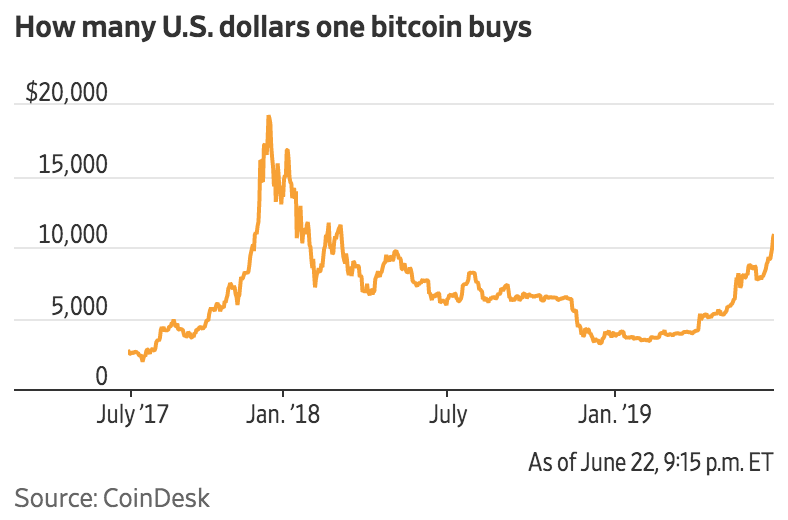 “Smart money and institutions have certainly begun to come in,” said John Patrick Mullin, a cryptocurrency investor and blockchain consultant in Hong Kong. He said he has owned bitcoin since 2013, and bought more in late March just as prices started rebounding.

The digital currency’s turnaround this year has offered hope that the worst is over after last year’s steep slump.

When bitcoin first crossed $10,000 in November 2017, it took just 18 days to hit its all-time high of nearly $20,000 before it came crashing down. The latest rebound has come with less hype, and perhaps more hope that the market is showing some signs of maturing.

“There are more reasons to believe in bitcoin now than there were the last time [bitcoin was at $10,000,] though I’m still not convinced that the price is sustainable,” said John Sedunov, an assistant professor of finance at Villanova University who published an academic paper in December analyzing whether bitcoin was more than just a speculative asset.

Bitcoin has outperformed most traditional asset classes this year, with investors citing more institutional support for cryptocurrencies and the blockchain technology that underpins them.

Large investors and corporations now play a greater role too, as exemplified by Facebook’s plans. JPMorgan Chase is developing JPMCoin, even though its Chief Executive James Dimon once called bitcoin a fraud, a comment he later said he regretted. Fidelity Investments has developed a custody service to store bitcoin. Online trading platforms such as E*Trade Financial Corp. and Robinhood also offer cryptocurrency trading to clients.

And earlier this week Ripple Inc., a startup behind the XRP cryptocurrency, agreed to invest up to $50 million in U.S.-listed money-transfer company MoneyGram International Inc.

It is difficult to find data that shows how much cryptocurrency trading is done by individuals relative to professional investors. But there are more institutional investors and hedge funds trading bitcoin now than in 2017. They are also among the prominent players trading futures, which in the U.S. have seen rising trading volume on CME Group Inc.

“You’re seeing how the market structure is completely different now from back then,” said Tony Gu, founding partner at NGC Ventures, a blockchain investment fund in Singapore. “The market is more mature than 18 months ago.”

Despite new institutional interest, trading volumes in bitcoin and other cryptocurrencies are far below their peak in late 2017, according to figures from data provider Bitcoinity. Back then, bitcoin’s surge was driven by individual investors and “overwhelmingly speculative sentiment,” says Mati Greenspan, an analyst at eToro, a brokerage firm. “This time it seems much more reflective of true value.”

The industry is still plagued by hacks, security lapses and fraud. One of the largest exchanges, Bitfinex, tried to cover up a loss of $850 million in customer funds. The largest Canadian exchange, QuadrigaCX, collapsed as its founder was using customer funds for personal expenses.

“There’s been a lot of positive trends and signs, but there are still many negative issues which continue to plague the industry,” said Mr. Mullin, the Hong Kong cryptocurrency investor.

A day after reaching the $10,000 mark for the first time in more than a year, the price of bitcoin briefly surged above $11,000 on Saturday.

It was the third price milestone in a week, after the world’s largest cryptocurrency topped the $9,000 levelfor the first time in 13 months last Sunday.

Bitcoin’s price is up 186% year to date, with most of the gain coming in the past three months.

Last week, one bitcoin analyst predicted that prices could hit $40,000 “in a few months” now that the $10,000 level had been cracked. “Bottom line: Crypto winter looks over,” Fundstrat’s Thomas Lee said.

As of Saturday evening, bitcoin’s market cap sat at nearly $188 billion, according to Coinmarketcap.com.

Bitcoin’s recent surge has boosted competing cryptocurrencies as well, with ethereum rising 20% in the past month and litecoin up 37% in that time. The sector has also been helped by Facebook Inc.’s unveiling last week of its upcoming digital currency Libra, which some analysts say could take crypto to the masses.