Some people are using their smart doorbells as nature cameras, checking the video all day long. Doorbell Camera Owners Value Entertainment Over Security And Privacy (#GotBitcoin)

The 31-year-old accountant in Broadview Heights, Ohio, checks the live and recorded footage from the smart device’s app on his phone at least a dozen times a day—while out and about, from the office, in the middle of the night—not for security, but to watch the deer, raccoons, birds and other creatures outside his home.

He developed the habit after the doorbell’s camera alerted him to a deer munching on his potted geraniums. Now he’s devoted to his front-porch fauna.

“I’d rather look at a squirrel than read comments on Facebook,” he said. “It’s not as depressing.”

Smart doorbells promise a range of security measures, including motion detection and the ability to see and talk to whoever is at your front door. Last year, Amazon.com Inc.’s Ring, Google’s Nest and other makers collectively rang up roughly $370 million in global sales, up 51% from 2017, according to research firm IHS Markit.

People usually buy the internet-connected devices to thwart package thieves and other ne’er-do-wells. Owners are also finding themselves transformed into obsessive nature watchers, captivated by the nonhuman prowlers outside their doors.

Kim Baltz in Hermitage, Tenn., bought a fancy doorbell after $230 worth of facial cream went missing off her front porch last year.

She has yet to spot any thieves, but she has ogled raccoons climbing on top of each other to reach bird feeders that hang from a tall metal pole. She’s cut back on perusing the online message board Reddit to make more time for gazing at all the furry foot traffic.

Billy Hankins and his wife, Anna-Leigh Hankins, of Hoover, Ala., watch their doorbell feed at the end of the day. “It’s something we do together to decompress,” said Mr. Hankins, a 35-year-old economics professor.

After coming home from work, the couple sits on the couch and spends a few minutes catching up on a posse of six cats that regularly use their front porch as a footpath between midnight and 5 a.m.

“It’s like a cat highway,” said Mr. Hankins. “We get excited when we see the black and white one because he, or maybe it’s a she, visits less frequently.”

Vivid footage of a small lizard puffing its throat near the front door hooked Ashley Reese. She used to occasionally check her phone when it dinged with a doorbell alert. Post-lizard, she checks every time to see what’s out there.

The video impressed co-workers at the Columbia, S.C., recruiting firm where she works so much, they listen for the alerts, too. “Anytime they hear it go off on my phone, they ask me, what is it this time? What’s on your doorbell now?” said Mrs. Reese, 36. “It’s made me popular.”

Ring founder Jamie Siminoff said although his company’s mission is to reduce crime, customers have sent in countless animal videos. A section of Ring’s website is dedicated to them.

The Amazon subsidiary recently released a commercial with one user’s footage of a bear climbing into a car. “It looks like a man in a bear suit because you can’t imagine it’s real,” Mr. Siminoff said.

Dennis Martire’s obsession with the possums and raccoons caught by his doorbell camera expanded beyond his front door. He installed three more internet-connected cameras to watch the action in his Leesburg, Va., backyard, too.

That’s when he discovered a blue heron treating his koi pond like a free sushi bar. Now he relies on the cameras’ motion-detection systems to warn him when the fowl shows up. The 54-year-old labor-union executive has hopped out of his morning shower more than once to shoo away the bird.

“I’ve even found myself getting up earlier to look for this stupid thing so I can scare him,” said Mr. Martire.

Susannah Brengel was similarly inspired by the wildlife she saw through her smart doorbell, such as when a band of squirrels managed to break into a bird feeder. She bought a second internet-connected camera to watch over a hummingbird nest with two eggs in her Westchester, Calif., backyard a few months ago. Then she bought a third.

Ms. Brengel, a movie-production accountant in her 50s, said she checked her cameras as many as 30 times a day for more than two weeks after the chicks arrived to watch them grow up. “They went from tiny jelly beans to filling up the nest to practically flying,” she said.

The babies have now left, but the mother, which Ms. Brengel calls Hettie, still drops by to snack from a feeder. “It gives a whole new meaning to the phrase ‘empty nesters,’ ” she said.

Allison Peters uses her doorbell camera as a wildlife monitor for a more practical use. The nursing professor in Ocala, Fla., who is in her 50s, caught a snake slithering in front of it last year. She estimates it was roughly 4 feet long. “He had little beady eyes and his tongue was sticking out,” she said. “I shuddered.”

She has relied on her feed to make sure the snake isn’t there before leaving home. “Thank God we have other ways to go out,” she said.

Hacker ‘Hijacked Ring Camera’ In Bedroom Of Girl, 8, And Haunted Her With Creepy Requests

CHILLING footage has emerged of a hacker taunting an eight-year-old girl through the smart security camera in her bedroom.

The Ring camera was only up for four days in the girls’ room before the Tennessee family says someone found a way to hijack it. 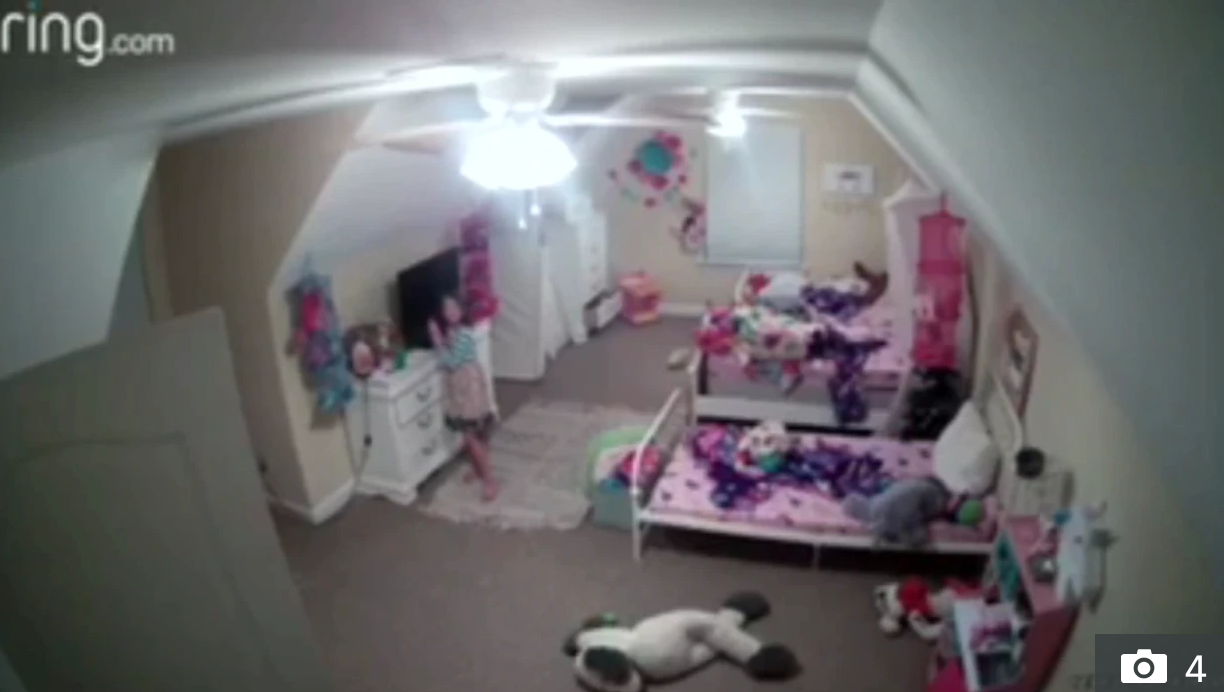 Mum Ashley LeMay shared the video after reporting the hair-raising incident to the police, reports NBC.

In it, a cyber crook speaks to daughter Alyssa through the gadget. He claims to be Santa Claus and encourages her to smash her TV.

Ashley bought the camera in a Black Friday sale to allow her to keep an eye on her three daughters at their Desoto County home.

“[Hackers] could have watched them sleeping, changing,” Ashley told NBC.

“I mean they could have seen all kinds of things.”

Ring, which is owned by Amazon, makes a range of smart home devices.

Its security cameras can be connected to remotely via a smartphone app. The gizmos even have speakers, meaning you can talk through them.

Being internet-connected means it’s possible for criminals to remotely take over a Ring device if they hack into it or have access to your username and password. 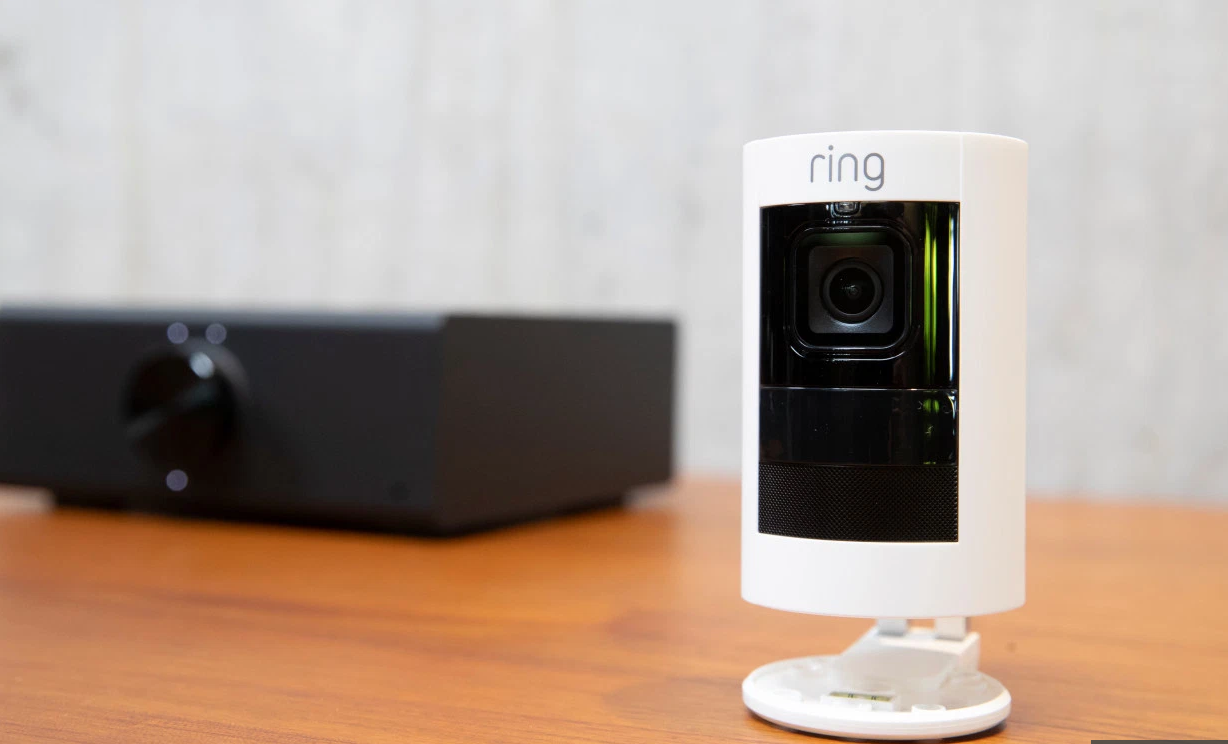 As well as taunting Alyssa, the mystery hacker played music through the bedroom camera and asked her if she was his best friend.

A terrified Alyssa called for help and her father came in and switched the camera off. It now sits disconnected on a counter and the family plan to return it.

“I watched the video and I mean my heart just like… I didn’t even get to the end where she is screaming ‘mommy, mommy’ before I like ran inside,” Ashley said.

The shaken Mum said she believed the attack was carried out by someone who knows the family or is close by.

Ashley did plenty of research before buying the device, and thought it was safe from snoopers.

However, she admitted she did not set up two-factor authentication, which would have added another layer of protection against cyber criminals.

The family has now added other protection measures to their home WiFi, such as changing the settings so it’s not visible to others.

In a statement, Ring told The Sun it was investigating the incident, which it claims was not the result of a breach of security. 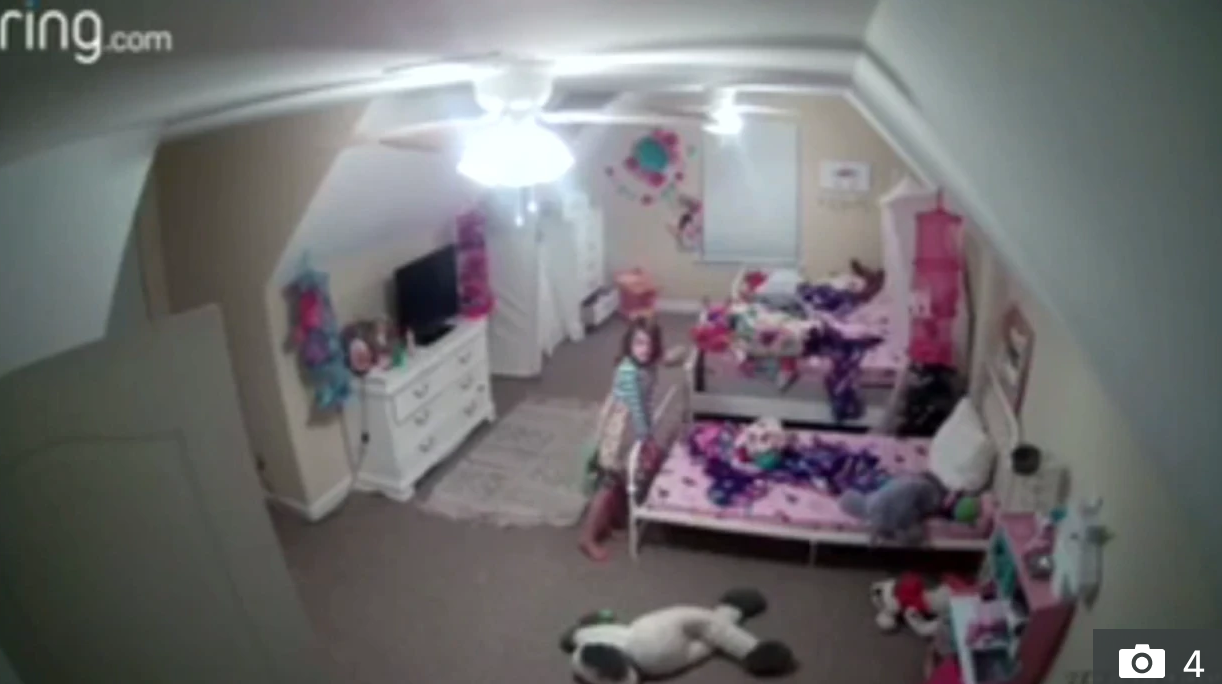 “Due to the fact that customers often use the same username and password for their various accounts and subscriptions, bad actors often re-use credentials stolen or leaked from one service on other services.,” a spokesperson said.

“As a precaution, we highly and openly encourage all Ring users to enable two-factor authentication on their Ring account, add Shared Users (instead of sharing login credentials), use strong passwords, and regularly change their passwords.”

A hacker attempted to extort a couple in Texas for $400k worth of Bitcoin after compromising their Amazon Ring doorbell. 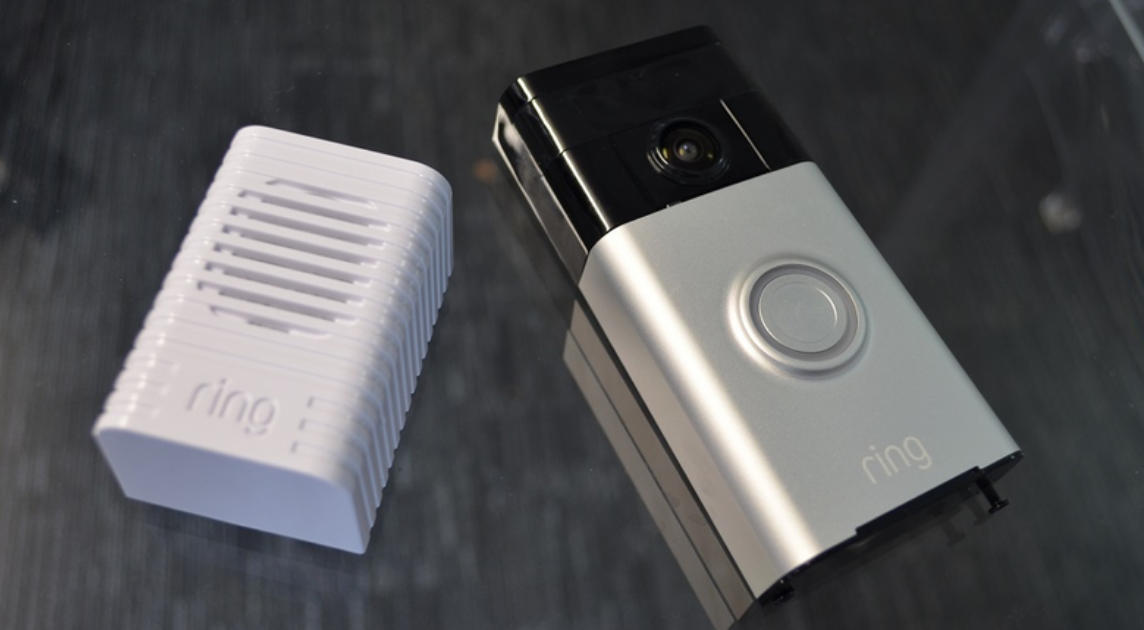 Amador, who lives in Grand Prairie just outside of Dallas, said her Ring doorbell was going off like someone had entered her house.

The couple then heard a voice coming from the doorbell saying “Ring support! Ring support! We would like to notify you that your account has been terminated by a hacker.”

The hackers then reportedly demanded 50 Bitcoins (worth ~$400,000) which was probably a bit high to ever fool anyone into thinking it was legitimate.

When it was clear the couple were not being fooled, the hackers began threatening to “terminate” Amador herself if she did not comply. To add to the authenticity, the hackers compromised her doorbell to make it appear like they were outside her home.

Amador was able to foil the plot using an advanced technique known as “taking the batteries out”.

Ring has come under fire a lot in recent years but has faced increased scrutiny since Amazon acquired the firm last year for $1 billion.

A report from Motherboard found software available for as little as $6 to compromise Ring doorbells. However, Ring claims the hacks were due to a third-party data breach in which customers’ account details were exposed and not a result of a vulnerability with the device itself.

Governments and their agencies have been ramping up public information efforts about securing IoT devices to help prevent such breaches.

Last month, the Australian government published a draft code of practice for IoT cybersecurity. And, just last week, the FBI made several recommendations about IoT devices including keeping them on a separate network.

With hackers increasingly targeting the rapidly growing number of IoT devices coming online, it’s worth heeding every bit of advice on how to protect yourself from a cyberattack like the one attempted on the couple in Texas.