The Wi-Fi radio signals found in most homes can now be used to pinpoint your movement, when they are sniffed by a system being developed by researchers in London. A Device That Can See Through Walls Using Your Wi-Fi Router 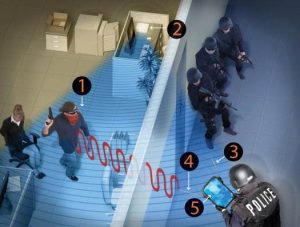 Kevin Chetty of University College London’s Department of Security and Crime Science performs research on what could be considered a kind of Wi-Fi radar. By detecting minute changes in the radio waves traveling through the air, the system can detect movement through a foot-thick brick wall.

Amazon’s Roomba Deal Is Really About Secretly Mapping Your Home

The ubiquitous Wi-Fi signals being beamed out by wireless routers and laptops change their frequency very slightly when bouncing off a moving object.

The system is about the size of a suitcase and doesn’t emit any waves itself, meaning it can’t be detected – so it’s stealthier than devices that emit X-rays or another form of radiation.

Its two antennas work together, one that monitors the baseline radio waves and one that looks for changes in them. The system can locate an object to within a couple feet, and can determine whether it’s moving and in what direction.

If someone is standing still, though, they may as well just be furniture. For now, the system can only detect objects in motion.

But another researcher on the project, Karl Woodbridge, says that improvements could be made that could it to detect a person’s breathing, allowing it to find stationary people. Of course, if the router turns off, the radio waves go away, and the system can’t see anything.

The UK Ministry of Defence is interested, naturally, and has commissioned a study to see whether the Wi-Fi radar could be used to scan buildings before soldiers or police enter them. The paper, “Through-the-Wall Sensing of Personnel Using Passive Bistatic WiFi Radar at Standoff Distances,” was published in a recent IEEE journal.

Their device identifies frequency changes to detect the moving objects. An important feature of their work is that since the device itself does not emit radio waves, it cannot be detected; it operates in stealth.

The two demonstrate what is called a passive radar system that can see through walls using WiFi signals generated by wireless routers and access points. Passive radar systems detect and track objects by processing reflections from non-cooperative sources of illumination in the environment, such as commercial broadcast and communications signals.

The device in tests successfully determined a person’s location, speed and direction through a brick wall that was one-foot-thick.

See Through The Wall (STTW) technologies are of great interest to law enforcement and military agencies; this particular device has the UK Military of Defense exploring whether it might be used in urban warfare, for scanning buildings. Other more benign applications might range from monitoring children to monitoring the elderly.

According to Woodbridge , some challenges remain which he and others involved in the research will attempt to resolve. The UCL team hopes to raise system sensitivity so that their system can pick up and detect not only people who are moving but also people who are standing or sitting still.

The device, he said, may be made to be sensitive enough to pick up on subtle motions that the ribcage makes in breathing in and out.

Wi-Fi radio signals are found in homes worldwide. Strategy Analytics, a market intelligence company, found in its recent study that 439 million households by the end of 2011 worldwide had WiFi network setups, or about 25 percent of all households.

The same report predicts that the worldwide number of Wi-Fi households will reach nearly 800 million in 2016, a penetration rate of 42 percent.

In this paper, we investigate the feasibility of uncooperatively and covertly detecting people moving behind walls using passive bistatic WiFi radar at standoff distances. A series of experiments was conducted which involved personnel targets moving inside a building within the coverage area of a WiFi access point.

These targets were monitored from outside the building using a 2.4-GHz passive multistatic receiver, and the data were processed offline to yield range and Doppler information. The results presented show the first through-the-wall (TTW) detections of moving personnel using passive WiFi radar.

The measured Doppler shifts agree with those predicted by bistatic theory. Further analysis of the data revealed that the system is limited by the signal-to-interference ratio (SIR), and not the signal-to-noise ratio.

We have also shown that a new interference suppression technique based on the CLEAN algorithm can improve the SIR by approximately 19 dB. These encouraging initial findings demonstrate the potential for using passive WiFi radar as a low-cost TTW detection sensor with widespread applicability.