Walmart, eBay also eye a foothold in federal purchases that could reach $50 billion a year. U.S. Government Seeks To Do More Online Shopping 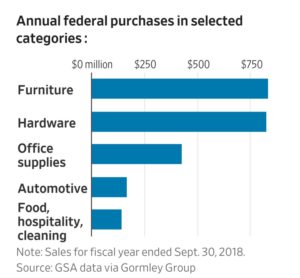 The Trump administration is testing a new method for federal agencies to buy office supplies and other goods online, a move that could give Amazon. com Inc. and its competitors a foothold in a market worth as much as $50 billion a year.

Next year, the General Services Administration is set to contract with privately run “e-marketplace platforms,” as it calls them, making them available to other federal agencies as an alternative to existing government-run purchasing websites.

Confidential bids laying out how a company’s website would fulfill the government’s requirements were due earlier this month.

Government contractors are up in arms. “We’re going to lose our shirts,” said Steve Armstrong, general counsel at MSC Industrial Supply Co., a Melville, N.Y., distributor of safety goggles, ladders, and other items.

Mr. Armstrong said his biggest customer is the GSA, the federal organization that facilitates purchasing by other agencies. He worries he now will have to list his wares on Amazon to reach the same buyers— and pay a fee to Amazon on sales that already have thin profit margins.

The federal government already does some purchasing online, but it is somewhat haphazard.

These “open market” purchases are legal under $10,000—a threshold above which additional regulations kick in—but are also difficult to track.

“There is a real benefit to GSA stepping in and taking the lead on a whole-of-government approach” to purchasing online, said Laura Stanton, a deputy assistant commissioner at the agency.

For Amazon, the bid to supply federal workers reflects its significant ambitions to ramp up government business. It already sells to many state and local governments, accepts federally funded food stamps, ships via the U.S. Postal Service and hosts cloud-computing for dozens of federal agencies.

It is opening a second headquarters in northern Virginia for up to 25,000 employees. Founder Jeff Bezos owns a home in the capital as well as The Washington Post, which offers free digital subscriptions to federal workers. Amazon spent more on federal lobbying than any other U.S. corporation this year through September, according to the Center for Responsive Politics.

“If you look back to 2013, Amazon wasn’t even a crumb on the table” in terms of government spending, said Daniel Ives, an analyst at Wedbush Securities. The cloud-computing business especially has fueled a “meteoric rise,” Mr. Ives said. He estimates Amazon Web Services, or AWS, now has about $2.5 billion in annual federal contracts, up about 10-fold since 2013.

Amazon has also become the target of government scrutiny. President Trump has criticized the company and the Post’s reporting. Amazon is arguing “unmistakable bias” in a legal protest of the Pentagon’s recent decision to award a $10 billion cloud computing contract to competitor Microsoft Corp. The Pentagon says the award was proper.

Both the Federal Trade Commission and the Justice Department have talked with other companies about how Amazon treats sellers and competitors, according to people familiar with the meetings. (Amazon hasn’t disclosed being formally notified of a U.S. antitrust investigation, in contrast to Facebook Inc. and Google owner Alphabet Inc. )

The e-marketplace program could be lucrative for Amazon and others.

Though it will initially cap transactions at $10,000, transactions under that amount represent a market of about $6 billion annually, the GSA estimates. That number could grow to include more of the $50 billion the agency roughly estimates the government spends annually on commercial goods.

The marketplace providers will collect fees—Amazon generally charges merchants that sell products on its site between 8% and 15% per transaction, not including shipping, advertising and other fees.

Marketplaces also could profit by selling their own goods, the way Amazon sells its own-brand products on Amazon.com.

Congress ordered the GSA to test e-commerce portals in defense- spending legislation signed by Mr. Trump in December 2017. Rep. Mac Thornberry (R., Texas), then chairman of the House Armed Services Committee, proposed the idea as a way to speed up military purchasing.

Before the bill passed, GSA officials and Mr. Thornberry’s staff separately traveled to Amazon’s headquarters in Seattle to discuss how Amazon’s online store works, according to current and former officials.

The meetings helped fuel speculation the program was tailored to Amazon. Trade associations representing other contractors have raised a host of concerns that echo criticism of Amazon’s consumer marketplace.

They question whether Amazon engages in a form of self-dealing, such as favoring its own goods in search results—which Amazon denies—and whether it properly vets sellers, products and supply chains—a particular concern when the military is the customer.

Both a spokesman for Mr. Thornberry and the GSA say their staff also met with other interested companies and didn’t design the program to benefit one company.

Amazon says competition on its platform is fair and that it spends heavily to ensure products and sellers are aboveboard. Walmart and eBay also attended public meetings about the GSA program, records show. They didn’t respond to requests for comment.

“We are helping to level the playing field and to make it easier for sellers to reach government buyers,” said Anne Rung, a former senior procurement official in the Obama administration who now runs the public-sector part of Amazon Business, its marketplace tailored to professional purchasers. She wouldn’t say if Amazon has bid on the GSA program.

Maj. Gen. Cameron G. Holt, who manages contracting for the Air Force, said he sees e-marketplaces as a step up from clunky, Cold War-era purchasing procedures. Today when purchasing officials are in a pinch, they use a credit card. That leaves him with unanswered questions: Is the government getting a good price? Where was the item made?

As part of an existing collaboration, Amazon has been sending the Air Force more-detailed information about what employees buy on the company’s business-to-business site, Maj. Gen. Holt said. It also is helping to steer purchases to contractors located near bases, he said: When an Air Force officer logs on, Amazon places a blue ribbon next to sellers in those ZIP Codes.

“The power of this is enormous,” Maj. Gen. Holt said of e-commerce.

He said Amazon accounts for a fraction of the Air Force’s purchasing and he welcomes other e-commerce operators: “I don’t really care if it’s Amazon or not.”

Rita Bonarrigo’s 20-year-old Houston office-supply business set a sales record in 2018, the year it began selling on Amazon Business. She believes government customers “are finding us on Amazon because they’re looking for diversity.” Amazon labels her company as woman-owned, certified by the Small Business Administration, she said.

‘They Own the System’: Amazon Rewrites Book Industry By Marching Into Publishing (#GotBitcoin?)

Amazon Targets Unprofitable Items, With a Sharper Focus on the Bottom Line (#GotBitcoin?)

Using Smartphones To Pay? That’s So Yesterday In China (#GotBitcoin?)

These Companies Are Succeeding Despite Amazon Or A Slowing Economy (#GotBitcoin?)