It’s not difficult to get a bonus if you work for the Internal Revenue Service — even if you haven’t paid your own taxes. IRS Workers Who Failed To Pay Taxes Got Bonuses (#GotBitcoin?) 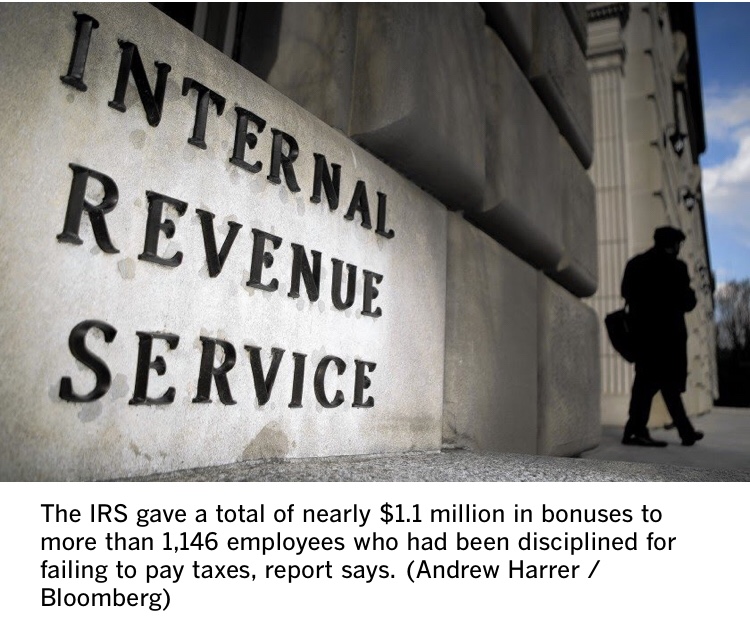 The IRS handed out a total of nearly $1.1 million in bonuses in a 27-month period to more than 1,146 employees who had been disciplined for failing to pay taxes, according to an inspector general’s report.

“This is outrageous,” said Rep. Sam Johnson (R-Texas). “The IRS is essentially telling its employees: Break the law and we will reward you.”

The employees were among more than 2,800 at the agency who received performance awards within one year of disciplinary action, such as suspensions or written reprimands for drug use, filing fraudulent time sheets or other misconduct, the report found.

Overall, about two-thirds of IRS employees received cash bonuses and other performance awards, such as extra time off, in 2011 and 2012, the report said.

But it was the payments to agency workers who had been disciplined for “substantiated federal tax compliance problems” that drew bipartisan outrage Wednesday.

“How can we expect the American people — many of whom are struggling to make ends meet — to trust their government when they learn that the very agency charged with collecting their tax dollars is rewarding employees who haven’t paid theirs?” Sen. Joe Manchin III (D-W. Va.) wrote to IRS Commissioner John Koskinen.

The performance awards did not violate the law, said J. Russell George, the Treasury inspector general for tax administration.

The IRS’ contract with the National Treasury Employees Union states that disciplinary action or investigations do not preclude an employee from receiving a bonus or other performance award unless it would damage the integrity of the agency.

But George said that “providing awards to employees who have been disciplined for failing to pay federal taxes appears to create a conflict with the IRS’s charge of ensuring the integrity of the system of tax administration.”

IRS employees disciplined for failing to pay back taxes should not be denied bonuses, but the money should be diverted to pay what they owe, Sepp said.

“If we’re assuming that the awards are given out on true merit … then say, ‘Sorry, you owe $800 on a lien and you’ve exhausted all your appeals; your reward is reduced accordingly,’” he said.

Federal workers have been criticized in recent years for failing to pay taxes, which help pay for the agencies that employ them.

As of the end of the 2011 fiscal year, federal employees and retirees combined owed $3.5 billion in delinquent taxes, according to the IRS.

Rep. Jason Chaffetz (R-Utah) has been pushing a bill that would allow the firing of federal employees who are seriously delinquent on their taxes and prohibit the federal government from hiring anyone with such a debt. The legislation passed the House on a bipartisan 263-114 vote in 2012 but was not taken up by the Senate.

In light of the inspector general’s report, Chaffetz renewed his call for the legislation.

“The indiscriminate awarding of bonuses to the very people IRS should be firing is unacceptable,” Chaffetz said.

This isn’t the first time the IRS has had problems with making payments to workers who owe taxes. An inspector general’s report in August found that about 5% of the agency’s contract employees owed a total of nearly $5.4 million in back taxes.

The IRS issued a statement saying that it already was making changes to its bonus policy.

“The IRS takes seriously our unique role as the nation’s tax administrator,” the agency said. “We strive to protect the integrity of the tax system, and we recognize the need for proper personnel policies.”

The IRS said it had developed a policy linking conduct to performance awards for executives and senior-level employees.

Even without such a policy, during the previous four years, “the IRS has not issued awards to any executives that were subject to a disciplinary action,” the agency said.

The IRS said it is considering a similar policy for the rest of the agency’s workforce, but that would have to be negotiated with the National Treasury Employees Union.

She said employees of the Treasury Department, of which the IRS is a part, had a tax delinquency rate of 1.08% in 2011, the most recent data available. That was lower than any other federal agency and well below the public’s 8.2% delinquency rate.

“IRS employees take very seriously their responsibility to pay taxes,” Kelley said. “At times, however, IRS employees can face the same kinds of financial pressures that impact other taxpayers. They may have to deal with the financial aftermath of a serious illness or divorce or an unemployed spouse.”

A 1998 law requires the IRS to fire employees for certain intentional offenses, including failing to file tax returns on time or understating how much they owe. But if the offenses are not determined to be intentional, they can simply face disciplinary action.

The following year, spending on cash bonuses dropped to $86.3 million and time-off awards fell to about 490,000 hours. But the percentage of employees receiving performance awards in 2012 increased as the workforce declined. The agency gave awards to 67,870 of its 98,000 employees, amounting to 69.3% of the staff.

Sepp said he had broader concerns about the large percentage of IRS employees receiving bonuses.

“It just doesn’t seem in tune with the reality of any workforce, public or private, that more than half of them would get some kind of merit-based award,” he said.