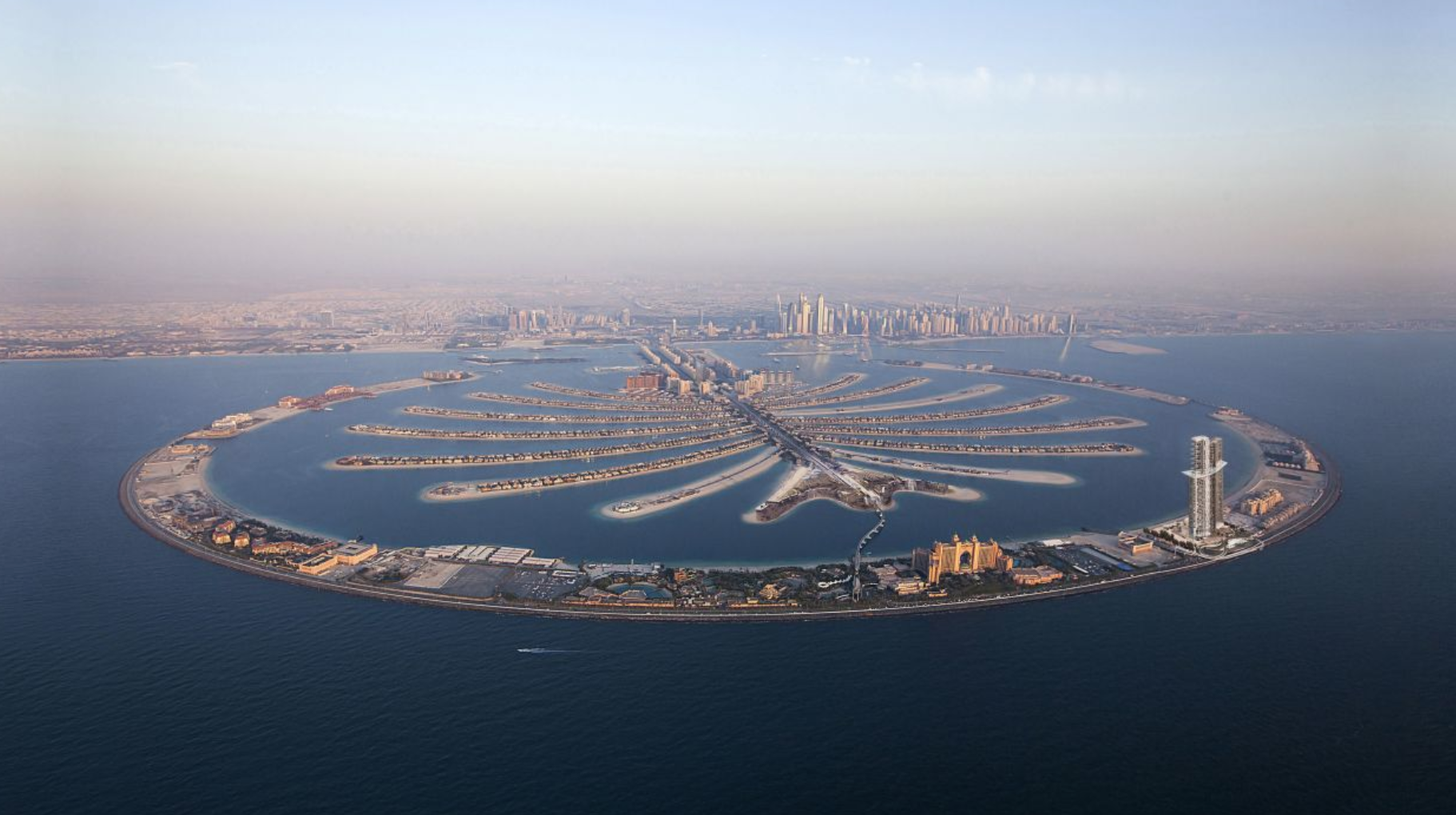 Several major additions to the world’s biggest man-made island are approaching completion as it transitions from a near-perpetual construction site to a near-finished community—with hundreds of shops and restaurants set to open in the year ahead.

Among the latest additions are a shopping mall and a tower that will form the centerpiece of the island, located close to the site originally earmarked for a 48-story Trump Tower.

While a monorail station originally bearing the Trump Tower name was completed 10 years ago, the tower itself never made it out of the ground, joining dozens of other developments across the city that were abandoned as property prices plummeted in the wake of the 2008-’09 financial crisis.

Now the Palm is putting its ghost projects of old behind it, with a new mixed-use tower and shopping mall close to where the old one, bearing the name of the property tycoon-turned-U.S. president, was due to be built.

“The Palm Jumeirah has established itself as one of not only Dubai’s, but the world’s most prestigious addresses,” said Taimur Khan, the Dubai-based research manager at Knight Frank.

The new projects on the Palm are being delivered amid a glut of new development in Dubai which continues despite tumbling property prices.

The paradox is in part related to earlier attempts by the government to curb rampant speculation by restricting mortgage loan-to-value ratios, which meant buyers needed much bigger deposits to buy homes.

While the move had the desired effect of cooling the secondary property market, developers quickly filled the funding void in the primary market by offering stage payment plans to buyers, where investors paid instalments that matched construction milestones, which fueled a new wave of development—much of which is now being completed.

“To date 60% of transactions are primary or off plan,” said Mario Volpi, a veteran Dubai real estate commentator and sales and leasing manager at brokerage Engel & Volkers.

“The developers’ generous payment plans are adding to the attraction to buyers and investors alike.”

The Palm was where the Dubai property dream began, instilling the belief among investors that the emirate could deliver projects of an epic scale.

Little of what most visitors would associate with modern day Dubai existed before work started on the island. There was no Dubai Marina, or Jumeirah Beach Residences or Mall of the Emirates.

Back in 2001, each morning the Dutch dredgers would sail out to the waters of the Arabian Gulf and fill their vast hulls with thousands of tons of sand sucked from the seabed.

Then they would return to Dubai’s Jumeirah coastline and blast it from their bows in a process called “rainbowing”—describing the distinctive arc of the sand propelled from the ship to the shore in the shape of a rainbow—an image much photographed by Dubai tourists of that time.

Each day for five years, the ships sailed back and forth to complete the seemingly Sisyphean task of creating a palm tree-shaped island some five kilometers long and with a crescent that was twice as long. Each evening, the sand rainbows were silhouetted against the Jumeirah horizon as the shape of a palm tree slowly emerged from the sea.

While the Palm did not fully silence the skepticism around some of the emirate’s more ambitious projects that were announced at this time, it did strengthen the reputation of Dubai as a place where big deals could be done quickly.

Crucially, it also convinced major investors, such as South Africa’s Sol Kerzner, to build projects like The Atlantis, a luxurious resort with a massive aquarium.

It helped to make what was still largely a feat of geotechnical engineering into a cash-generating tourism hub that effectively added more than 70 kilometers of seafront development opportunity as well as its own distinct community.

“Traditionally, the island has featured luxury apartments on its trunk and sprawling garden homes and villas on its numerous fronds, attracting young professionals and families respectively,” Mr, Khan said.

The Palm was soon followed by more superlative-strewn mega projects, from The Burj Khalifa, the world’s tallest tower at 828 meters and 163 floors, to the Middle East’s first indoor ski slope, as well as its biggest shopping mall and largest observation wheel.

Property development has continued on the island undaunted by two major real estate downturns—one starting in late 2008 that coincided with the global financial crisis and lasted more than three years—and another starting in 2014 with the collapse of oil prices, which is still continuing.

“Despite the huge task and delays to bring this engineering marvel to fruition, The Palm Jumeirah is a success story much like that of Dubai itself,” Mr. Volpi said.

Comprised of a two-kilometer trunk, 17 fronds and a surrounding crescent, the island is already home to some of Dubai’s most luxurious hotel properties and residences. 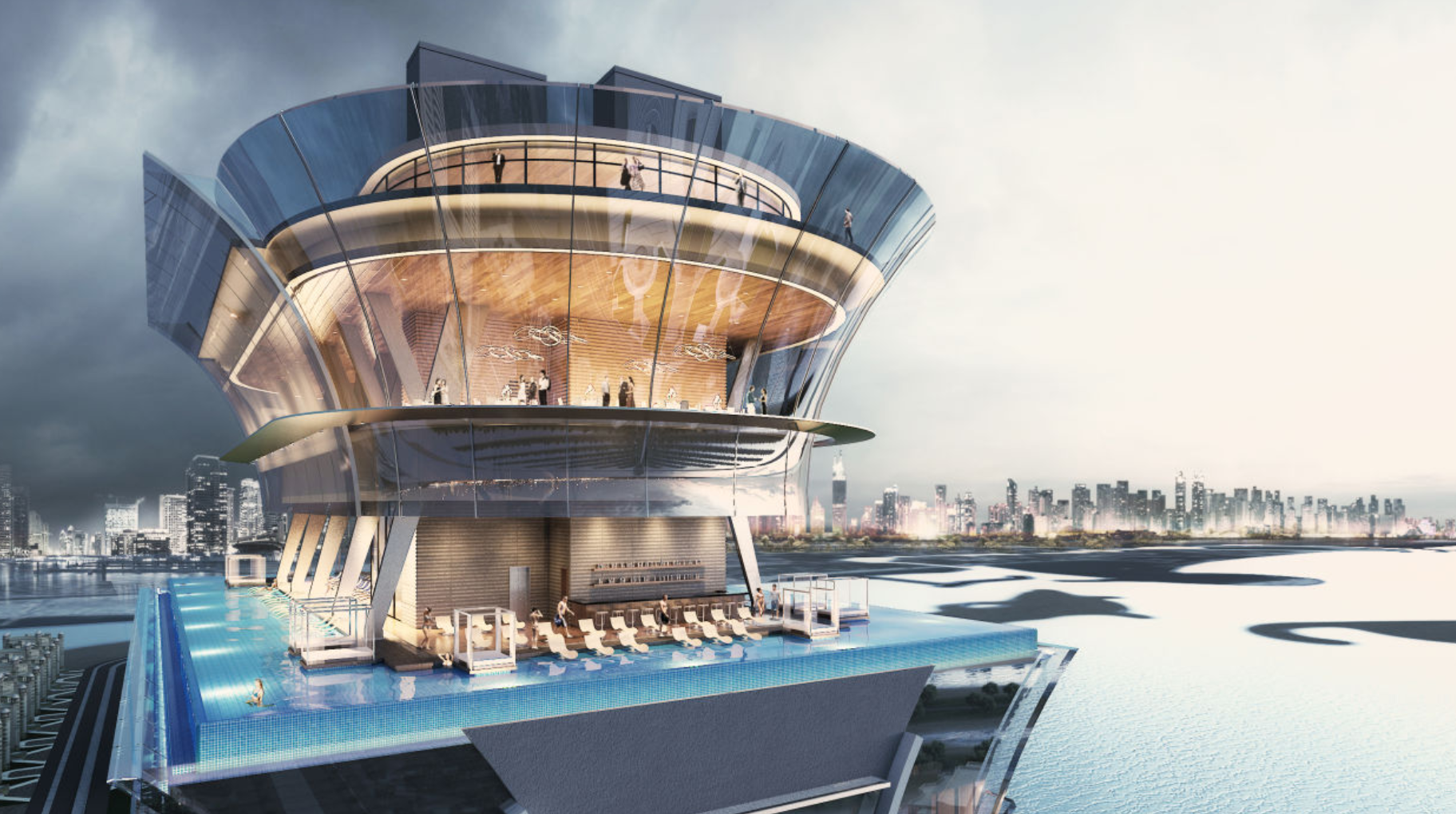 A new wave of development is now significantly adding to its retail and dining offerings, although there are questions over just how many new shops and restaurants the island can reasonably absorb.

The Pointe, an AED800 million (US$218 million) waterfront dining and entertainment project, opened in December 2018. Located at the tip of the island, and facing the Atlantis Hotel, it has 70 restaurants, shops and attractions that include a dine-in cinema.

The AED1.2 billion mall will have 350 shops, restaurants and other attractions across five floors. It will feature two fountains, two waterfalls plunging 65 feet into the mall and a rooftop dining plaza.

Nakheel Mall is also the access point for the 240-meter-high public viewing deck at The Palm Tower, the 52-story hotel and residential tower expected to be completed next year is being funded, like most of the current crop of new residential developments in the city, by investor stage payments. The first 18 floors of the tower will be a 289-room St. Regis Hotel, with 432 luxury residences on the upper floors.

The Palm Tower is one of the few on the island directly developed by Nakheel. 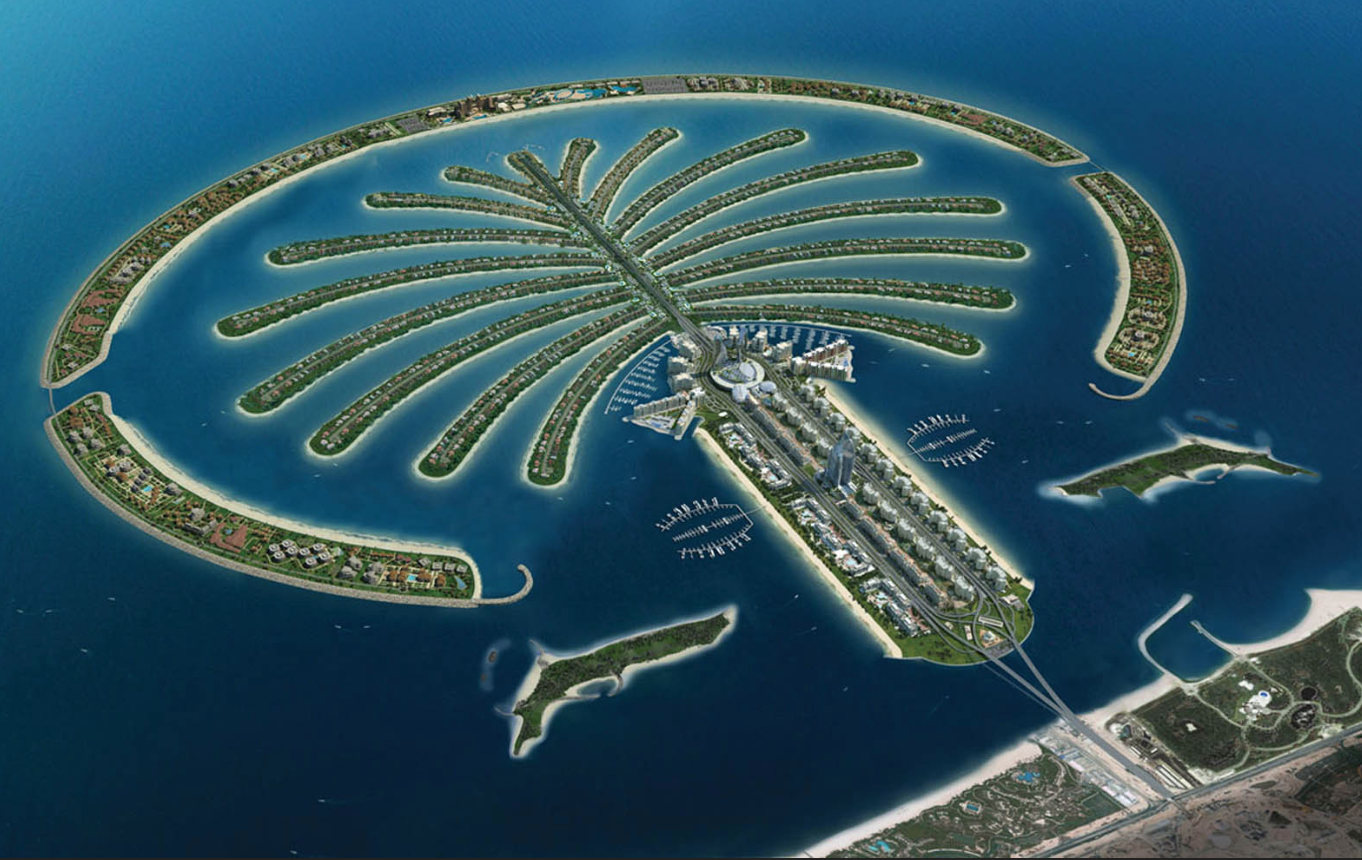 While Trump Tower was being sold as the market turned south in 2008, Nakheel launched its tower when the market was rising a few years later.

The Palm Tower, a 52-story hotel and residential tower, will eventually look across to an even taller development on the crescent of the island known as PALM360.

Nakheel said there is limited availability of apartments in the Palm Tower, with two two-bedroom apartments on the 46th floor ranging from AED8.8 million to AED9.2 million.

PALM360 is a planned two-tower hotel and residential complex with what Nakheel describes as the world’s largest skypool joining the towers 170 meters above ground.

Located on Palm Jumeirah’s western crescent, it will have a Raffles hotel and Raffles-branded residences, including 16 penthouses above the sky pool.

PALM360 will have 331 residences in total. Each penthouse will have its own infinity pool, gym and cinema. At 260 meters, the project will be the tallest structure on the island. While site preparation and piling work has been completed, the developer, Nakheel, has not disclosed when the main structure will be built. The developer also declined to comment on why so much property development continues in the emirate despite the sharp correction in prices.

“Over recent years, we have seen a broad range of developments come to the market, both along the trunk and on the crescent, which look to move past the initial offerings we have historically seen on the Palm,” said Mr. Khan.

He sees the island attracting what he describes as a new caliber of super-prime development.

Projects such as PALM360, the Palm Tower and the ongoing Royal Atlantis Residences fall into this category of high-end development.

While the near-term outlook for Dubai property remains clouded by a glut of new homes and a broader regional economic slowdown, the appetite among developers for ultra-luxurious high-rise development on the Palm-Jumeirah appears undiminished.