What Is A Satoshi, The Smallest Unit On The Bitcoin Blockchain? (#GotBitcoin?)

From paying for pizza with satoshi (SAT) on the Lightning Network to the 10,000 satoshis being added to the Lightning Torch each time it is passed, down to the 1 sat/byte rate on the bitcoin SV network, SAT is being used more and more in blockchain and crypto conversations. What Is A Satoshi, The Smallest Unit On The Bitcoin Blockchain? (#GotBitcoin?) 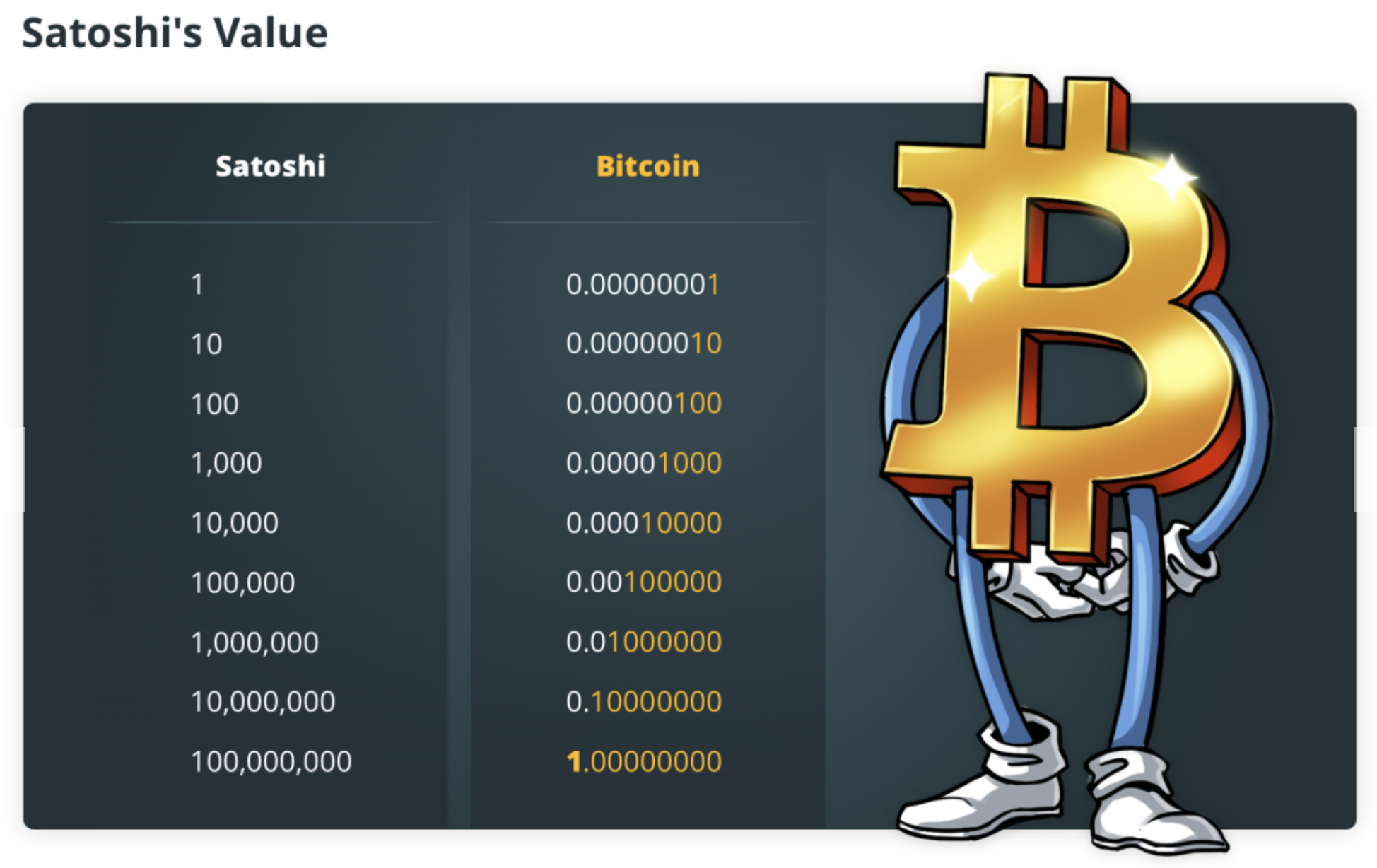 The satoshi is the smallest unit that is recorded on the bitcoin blockchains:

SAT is becoming more common in day-to-day blockchain and cryptocurrency conversations. Bitcoin mining software like HoneyMiner pay your mining reward in SAT, #StackingSats is a hashtag used frequently on Twitter, and the Lightning Torch was accounted for in satoshis — just to name a few instances of the word being used.

But many — especially those who are new to blockchain and cryptocurrency — may be seeing these current events that involve the SAT and asking themselves “What is a satoshi!?”

What is satoshi, and who created satoshi?

When we say “satoshi,” we actually are not referring to Satoshi Nakamoto, the pseudonymous creator of Bitcoin. However, the satoshi we refer to similarly goes back to the early days of bitcoin and the BitcoinTalk forum.

It all began on Nov. 15, 2010, when BitcoinTalk user Ribuck proposed that 1/100 of a bitcoin (0.01 BTC) — the smallest unit that could be displayed on the interface, at the time — be called a satoshi. Although Ribuck made this proposal, none of the other users on the BitcoinTalk forum affirmed or denied his proposal. This may have been because the thread at hand was a poll where voting took place regarding the best Unicode character for bitcoin, which has nothing to do with units of account and, therefore, may have made Ribuck’s comment look out of place.

However, when Ribuck joined in on Unicode thread, he entered with a question:

“What’s the plan for subdividing Bitcoins? Do we go in thousands like the metric system (millibits, microbits, nanobits)?”

It was a good question, but a question that nobody was willing to answer, confirm or deny. As a result, the idea expired, and there was no action taken regarding Ribuck’s proposal — at least, not at first.

Three months later, on Feb. 10, 2011, Ribuck made a similar comment regarding the unit of account denominations. But this time around, Ribuck’s comment felt more at home in a thread titled, “More divisibility required — move the decimal point.” This time, when Ribuck joined the discussion, he got feedback — eight days later, in an entirely new thread titled Bitcent, in which BitcoinTalk user Kolbas decided it was time to think about smaller monetary units recorded on bitcoin’s blockchain.

To which, another user replied, “affirmative.” And after that, it was all said and done: 0.00000001, the smallest unit that could be recorded on the bitcoin blockchain, became known as a satoshi from that moment forward.

Why The Time Lag?

Although satoshi entered the blockchain and crypto industry lexicon in 2011, it did not become popular — maybe even a buzzword — until recently. As of late, more and more people refer to SAT, mention SAT in their podcasts, have campaigns that revolve around SAT — for example, #StackingSats — or price goods and services in SAT.

Chris Mezzacappa, CEO of bitConsult, a bitcoin consulting company, said this may be because of price bias:

“Coming from a finance background, I automatically think of stock prices and stock splits. […] Ultimately, people want more of something and have price bias.”
If a stock has a relatively high value, the company may decide to split the stock so that the individual shares become more affordable — and easier on the mind — for retail investors. The same psychology applies to bitcoin having a high price tag, which is why cheaper altcoins typically could look more attractive and affordable to first-time buyers when they enter cryptocurrency markets (think Ripple or even Ethereum).
Mezzacappa continued:
“There’s been focus in the past on “moving the decimal” because of this.

However, even with price bias aside, it does feel ridiculous buying something online with .001 BTC. I’m not sure sats will be the final answer — it’s too hard to remember how many decimal places bitcoin has. However, if the whole industry switches to sats, it may become second nature.”

As consumers, we are used to buying goods and services that have user-friendly price tags — whole numbers, or numbers that are rounded off at the end. But because of bitcoin’s relatively high price compared to the price of many day-to-day goods and services, when items are priced in BTC, they usually end up with relatively unattractive numbers — for example, $5 is 0.00057206 BTC, at the time of writing. However, SAT was able to change that and gave consumers a user-friendly number to work with — for example, $5 is equal to 57,206 satoshi, at the time of writing, which is not the prettiest, but cleaner than 0.00057206.

Most people aren’t fond of working with fractions and decimals. If things were priced solely in BTC, it could leave merchants with unattractive price tags that are likely to confuse consumers at the checkout.

That being said, you should familiarize yourself with SAT — because it could be here to stay, at least for the short term. After eight long years, satoshi has gained popularity. Satoshi has created a more convenient way to price goods and services in BTC — without the price tag looking unattractive or confusing to consumers. Both price and price bias seem to contribute to the time lag regarding SAT gaining popularity, but all in all, the industry appears to have made SAT a meme in and of itself, finding their own unique ways to incorporate satoshi into our lives — like the lightning torch — and doing so in such a way that these events that it is involved in have caught fire and gone viral in their own respects, bringing satoshi along for the ride with it.