Cryptocurrency pioneer Justin Yuchen Sun will be trying to convince Warren Buffett about the promise of bitcoin, after he paid $4,567,888 in real money for the power lunch with the so-called Oracle of Omaha. Crypto Pioneer Justin Sun Pays $4.6M for Power Lunch With Warren Buffett (#GotBitcoin?) 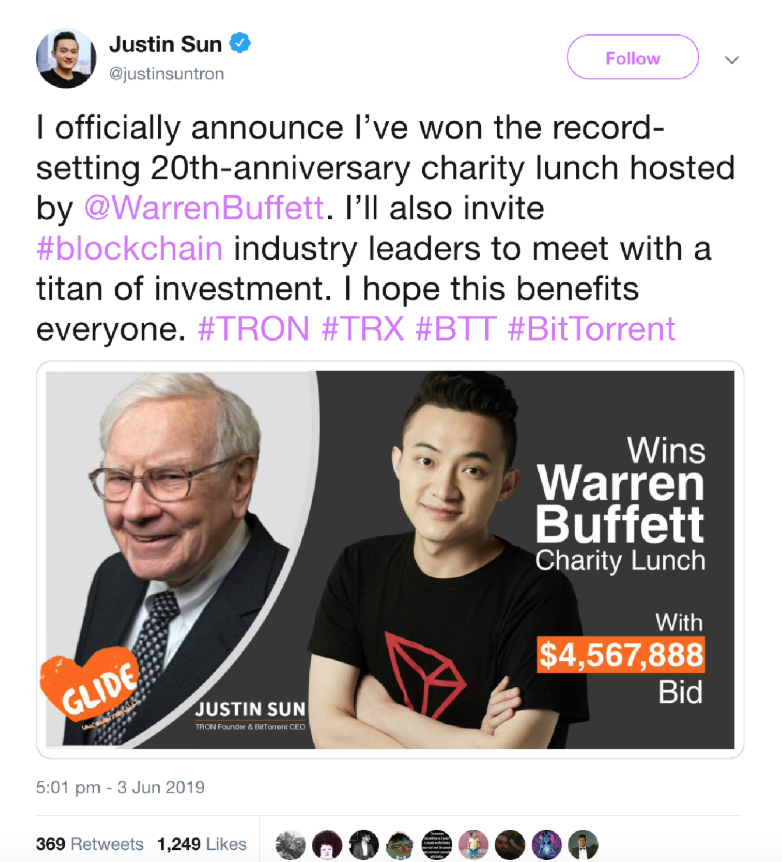 The 28-year-old China native, who founded Tronix—known as Tron or TRX token—in Singapore in 2017, announced on Monday that he was the winner of the 20th Annual Power Lunch with Warren Buffett, a charity auction on eBay to raise funds for San Francisco-based Glide Foundation, which helps the homeless in the area.

“The money goes to a very worthy charity that has for decades been fighting to help people who are homeless and poor,” Sun tells Penta in an email. “It’s money well spent —and I get the benefit of meeting one of my financial idols.”

Sun, 28, a graduate of the University of Pennsylvania, plans to invite some friends in the industry to the lunch at the New York City steakhouse Smith & Wollensky.

“The big thing is to raise awareness about blockchain,” Sun says. “I want to move beyond the hype about getting rich off crypto and start talking about blockchain uses and building a freer, fairer internet for everybody.”

Buffett has openly criticized bitcoin in the past, even calling it “probably rat poison squared” during an interview with CNBC last year. He couldn’t be immediately reached for comment for this story.

Bidding for the private lunch started on May 26 and closed on May 31.

Sun previously founded Peiwo, a Snapchat-like app for China with millions of users. He bought the software file-sharing application BitTorrent for $120 million last year. Tronix is the 10th largest cryptocurrency with a market value of $2.56 billion, according to data provider CoinMarketCap.com.