The Hottest Perk In Tourism: Making The Crowds Disappear (#GotBitcoin?) 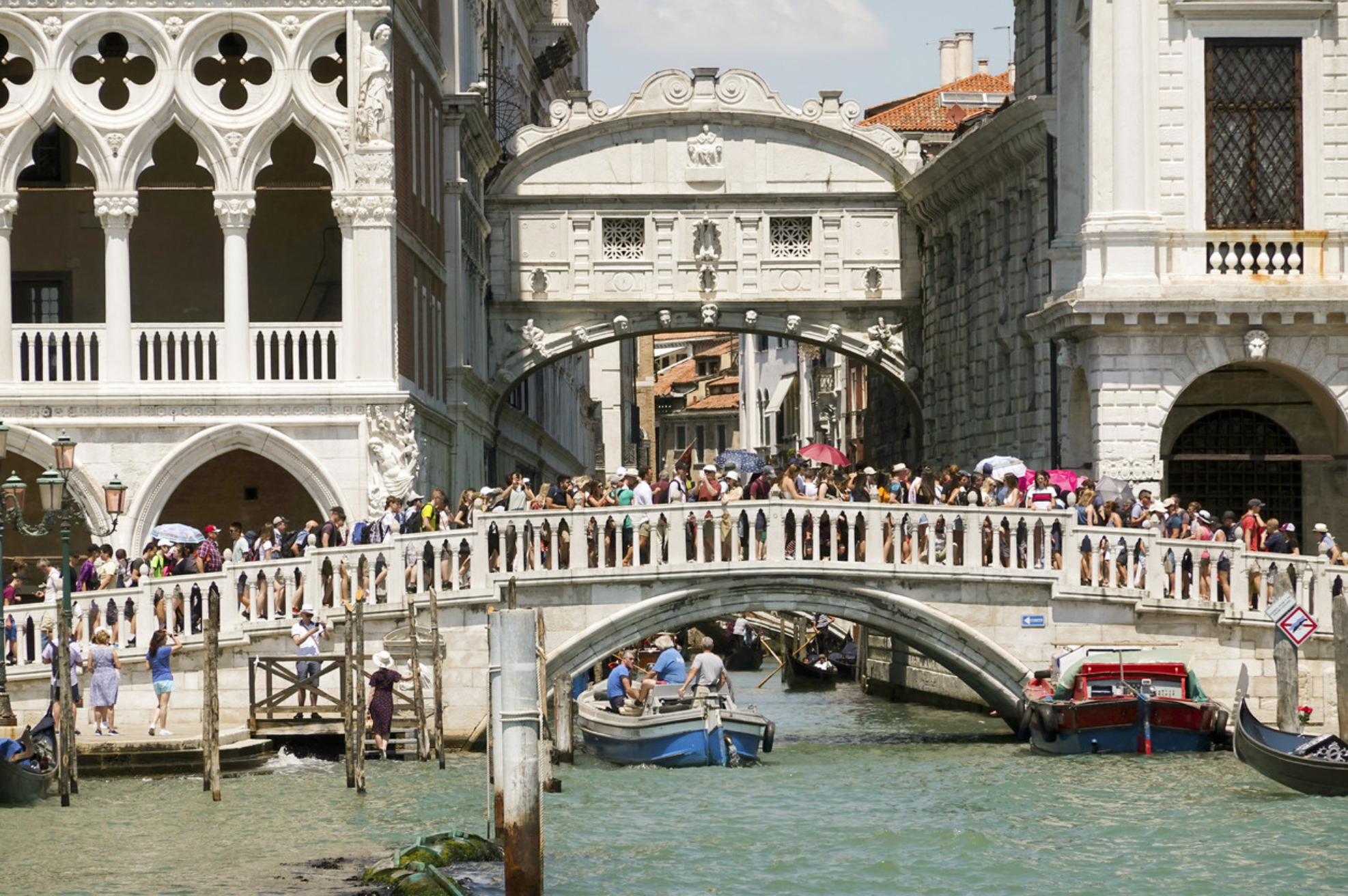 High-end hotels in some of the world’s most tourist-jammed destinations are selling something increasingly elusive: privacy.

In Venice, Santorini, London and elsewhere, luxury hotels and tour operators are launching new efforts to help guests avoid the throngs of their fellow travelers. The endeavors go well beyond the after-hours museum tours and private palace visits that they have long offered. Now, hotels are arranging perks like guest-only boat-and-helicopter shuttles that dodge crowded roads, and out-of-town excursions timed to flee peak tourist surges.

Some properties have become experts at timing and strategic maneuvering. Pier Flavio Fornari, head concierge at the Aman Venice, books his guests boat trips on the quieter southern side of the city’s lagoon, and arranges gondola rides on its canals after 9 p.m., once the commercial water traffic dies down and the day-trippers have departed. (But if you want a singer to serenade you, you’ll have to do it before dark. Otherwise, “people can slip,” he says.)

When visiting the temples of Angkor Wat in Cambodia, luxury tour operator Butterfield & Robinson ushers guests to a little-used entrance after the sunrise crowds have departed. Staffers at the Mystique Hotel on the island of Santorini in Greece study the cruise ship arrivals to steer guests’ sightseeing—and keep them away from the thousands of day-trippers.

A few years ago, “guests were starting to be a bit bothered,” by the growing crowds, says Kalia Konstantinidou, Mystique’s owner. “They were asking for advice and alternatives. It created our new way of thinking about how to protect them.”

In April, Il Sereno Lago di Como, on the banks of Lake Como in Italy, where high-season rooms start around $900 a night, began a helicopter service so well-heeled guests could avoid the dense summer traffic on the roads from Milan. (Price: about $2,800 for up to six travelers.) Gurney’s Newport in Rhode Island, with high-season rooms starting at $399, provides a skiff boat to ferry guests from the property to downtown Newport. During the city’s popular jazz and folk festivals, it cuts what can be a one-hour drive on packed roads into a five-minute jaunt.

The move is one of self-preservation. It can be hard to position a hotel as a relaxing luxury getaway if guests are engulfed by crowds the minute they walk out the door. International tourist arrivals world-wide grew to 1.4 billion in 2018, according to the United Nations’ World Tourism Organization. That is up from 1.32 billion in 2017 and 680 million in 2000. Localities, museums and other tourist sites are making efforts to rein in the traffic, but those can only do so much. About 60% of travelers say that tourist overcrowding will have a “significant impact” on which destinations they choose to visit during the next five to 10 years, according to a 2019 survey of nearly 3,000 U.S. travelers by marketing and research firm MMGY Global.

In the evenings, the main pedestrian streets of Oia, Santorini, are so jammed with tourists wanting to catch the town’s iconic sunset that it “looks like a football game with the masses going in and out of the stadium. And the stadium is the sunset,” says Evangelos Dimos, general manager of the Mystique, part of Marriott International ’s Luxury Collection brand. So Mystique staff tell their sunset-seeking guests to skip town altogether. Instead, concierges will book private catamarans for guests to watch from the sea or usher them via hotel cars (taxis can be hard to find) to the quieter towns of Megalochori or Akrotiri, where they can view from low-key bars and cafes. Rooms including breakfast begin at about $1,180 per night in high season. The catamaran tour is about $175 per person or nearly $1,700 to rent the entire boat.

Mrs. Konstantindou says her biggest headaches are the huge cruise ships that dock off Santorini every day. Her staff checks the cruise ship calendar each day to find out how many ships will be in port and anticipates which excursions the passengers will take. Then they tell Mystique guests “what to avoid every day,” she says. “If we have a guest who wants to go to [the town of] Fira tomorrow, we’ll say, ‘Don’t go to Fira tomorrow.’ Better to move it to the day after.”

Nathan Lane has been organizing and leading tours to Angkor Wat for Butterfield & Robinson since 2012. The company used to bring guests to the west entrance in time for sunrise. But over the years, that spot has become increasingly mobbed. “There can be 1,000 people for sunrise,” he says. So Mr. Lane sends guests to the east entrance a bit later in the morning. “There will be like four people walking around. It can be a more meaningful, wonderful experience,” he says. The crowd-free moments have become a selling point for his tours, too, he says. Prices for trips that include a visit to Angkor Wat run about $1,000 per person per day.

Jeff Burns, a real-estate developer in Austin, Texas, who visits Newport twice a year, says the new skiff boat clinched his decision to stay at Gurney’s Newport for the town’s folk festival in July. On his visit last year, he said the wait for a public water taxi was more than an hour long. So he drove, but it took nearly two hours to travel the 5 miles from the festival grounds to where he was staying. This year, “we were going to rent a house,” says Mr. Burns, 46 years old. They decided against it. “We said if we don’t stay at Gurney’s, we’re going to be waiting in these lines,” for the water taxi.

At the Lanesborough Hotel in London, with high-season rooms from about $695, head concierge Simon Thomas directs guests to less-trafficked sites during the peak summer season. He suggests alternatives like Lincoln’s Inn Fields—an area of historic buildings and parks—and the Monument to the Great Fire of London, which has panoramic views of the city. At the Andaz Amsterdam Prinsengracht, the hotel’s front office manager leads a complimentary bike tour every other Sunday morning, taking guests through quiet parks and to lesser-known sites like the Little Woodcutter statue. (Doubles in high season start at about $500 per night.)

When clients of travel adviser Beth Flowers want to book a July or August trip to Paris, Rome, Barcelona or another crowded hot spot, she first tries to talk them out of it. But if they can’t or won’t choose another time or destination, Ms. Flowers steers them to hotels in quieter residential areas and those located in small alleys or on dead-end streets. They “make for great respites,” says Ms. Flowers, vice president of leisure travel at Brownell Travel in Birmingham, Ala., a member of the Virtuoso network of travel agencies. In Paris, she likes to book the Hôtel de Crillon, which is within walking distance of the Louvre but has front doors that open onto the quiet, rear section of the city square Place de la Concorde with little car or foot traffic. (High-season rates begin at $1,230 per night.)

Le Sirenuse in Positano, on Italy’s Amalfi coast, tries to shield its guests from crowds that turn the town’s narrow streets into what can feel like a summer-long conga line. The hotel, where rooms in high season begin at around $900 a night, has its own boat: Guests receive a complimentary cruise up the coast. There are morning excursions to less-trod hiking paths. Staffers recommend restaurants in quieter villages that can be reached by boat, avoiding treks on the area’s jammed roads.

Where the Crowds Aren’t

Instead Of: Santorini, Greece

Head To: Milos or Naxos. Stunning volcanic scenery and whitewashed villages on Milos. Interesting archaeological sites on Naxos. Lovely, quiet beaches on both.

Instead Of: The Louvre, Paris

Instead Of: Lake Como, Italy

Instead Of: The Amalfi Coast, Italy

Instead Of: London in July

Head To: London in October. The same great sites with shorter lines.

How To Shop For Travel Insurance? (#GotBitcoin?)